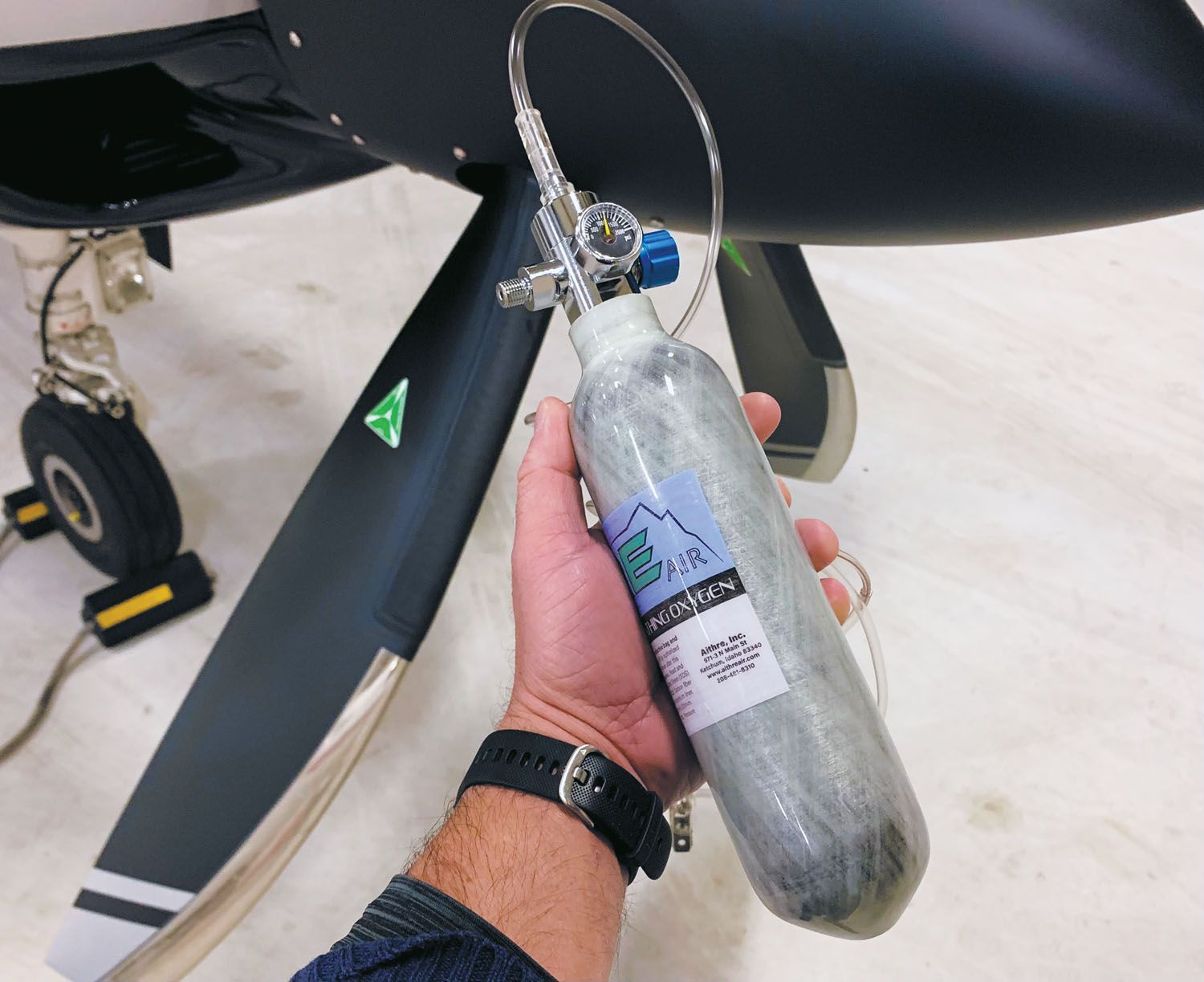 No longer are there good excuses for not having oxygen in the cabin. Smaller-capacity oxygen tanks are relatively simple and inexpensive, and if you fly something where you’re counting every pound loaded in, composite tanks are featherweights. But there’s a capacity/endurance tradeoff. Two of the latest aviation-focused small-bottle O2 interfaces come from Aithre and Aerox. We rounded them up and put the hose to the nose.

Small-bottle oxygen tanks aren’t a new invention. Adventurers and athletes have used them for years. BOOST Oxygen (jumpstarted by an appearance on the television show Shark Tank) is one brand, packaging 95% pure supplemental oxygen in sports-friendly bottles. Yes, we’ve seen some pilots keep them in the cabin, but think of these as one hitters, with the largest bottle (10 liters) good for roughly 200 seconds of continuous use. They’ll do little good for even short cruises in the teens. That’s where larger (but still compact) bottles from Aithre and Aerox come in.

Think of them as entry-level airborne oxygen supplies, which unlike the BOOST product, connect with cannulas and flow valves. They’re also simple to use and can be a good option for passengers. If you occasionally fly at oxygen altitudes for short durations (maybe when climbing over weather) small-tank O2 can be a good alternative to a full-sized setup, and they can be helpful for night flying at lower altitudes. These constant-flow systems aren’t for long duration at altitudes where supplemental oxygen is required by FAA regulations.

Aithre Aviation has an impressive app-driven biometric sensor interface that allows for real-time monitoring of SpO2 (oxygen saturation) levels, oxygen quantity and flow, plus useful trend data for keeping tabs on the condition of up to six cabin occupants.

It recently added to the interface by offering two personal-sized composite oxygen tanks (non-DOT approved and made by a third party), plus a variety of accessories, including some that work with the Mountain High O2D2 pulse demand portable oxygen system. Aerox also conveniently packages some of its tanks with the Aithre accessories.

The smaller portable setup has a 2000-psi 47-liter bottle with a fixed-flow, preset 0.5 LPM (liters per minute) regulator. That’s good for roughly two hours of endurance. The bottle is 2.5×11.5 inches and weighs 1.9 pounds. Aithre says the smaller bottle is intended for use up to 15,000 feet. The tank is made of lightweight carbon fiber that has a 15-year service life, requiring five-year testing intervals.

The setup is easy to use since it’s fixed flow. Simply connect the cannula and open the valve. Priced at $395, the entry-level Aithre bottle includes the regulator, a neoprene tote bag and one Uni-flo2 cannula. It’s inserted in one nostril and the hose tucks under the top of the ear. Aithre says the 7-foot, single-prong PVC cannula is as effective as a dual-prong one, delivering the same amount of oxygen. The idea here is more comfort when wearing a headset. It’s disposable, and Aithre says the $20 accessory should be replaced after two weeks of wear. You can also insert the soft tip into the mouth.

Aithre has announced a larger 152-liter 2000-psi carbon fiber bottle for up to six hours of endurance. The larger bottle measures 4.5×13 inches and weighs 3 pounds when it’s topped off. Like the smaller 47-liter bottle, the 152-liter bottle has a fixed-flow regulator. The bottle, priced at $495, comes with the combined regulator/valve, the Uni-flo2 cannula and a carry case.

Both bottles can be ordered with Mountain High-compatible regulators. You’ll need to purchase a Mountain High two-cannula splitter and flow meter if you don’t already own one, and Mountain High offers Aithre packages and accessories. The price of the 47-liter bottle with the Mountain High regulator is $775.

Certainly no stranger to the portable aviation oxygen market, Aerox has also introduced two entry-level compact bottles. First, the PrO2 Plus Flight Bag Portable setup. Aerox says the compact aluminum bottle is intended for VFR pilots who occasionally fly at higher altitudes (up to 18,000 feet). As required by regulations, the system has a flow indicator (green when oxygen is flowing and red when it’s not).

We like that the Aerox has a secondary disconnect as a fail-safe against inadvertently spending the oxygen supply if you disconnect the cannula while the bottle is on. A toggle switch on top of the regulator turns the flow on and off. The cannula plug-in uses a simple self-sealing quick-disconnect connector. Aerox bottles are fully DOT approved, and since Aerox is a provider to a wide variety of airframe manufacturers, it has built the entry-level small bottles to the same standards as its larger ones, and can be shipped filled. There’s a $55 hazmat/ground shipping fee when shipping the bottle filled. (Aithre told us it’s working on a bottle exchange program, but it isn’t approved)

For comparison, the larger Aerox A-series bottle is 180 liters and the PrO2 Plus Flight Bag Portable is 120 liters. That means an approximate three-hour endurance. The bottle uses a single continuous-flow mustache cannula—the same high-quality one that’s supplied with the company’s larger portable setups.

The PrO2 Plus Flight Bag Portable is $399. Worth mentioning is a version of the Aerox 120-liter bottle with continuos-flow regulator has been used as a canine bottle, with connection to a canine mask. As Aerox’s Scott Ashton explained, you really don’t want to be sharing your oxygen supply with your dog in the event it pulls out a hose and drains the supply.

There’s also the PrO2-2 system, which is intended for emergency backup in pressurized aircraft if there’s a main system failure. Designed for a higher flow rate, it comes with a mask instead of a preserving cannula like the PrO2 Plus Flight Bag Portable. Think in terms of using the PrO2-2 during a quick descent when the primary system is down. It has an approximate 20-minute endurance.

We think it makes sense to compare the price of larger-capacity bottles (and the included hardware) before making the investment in a compact. Depending on the individual and the altitude in which you’re using it, a small bottle with a constant-flow regulator just might not be enough, especially if you fly with a passenger. For example, the Aerox two-place A-series setup with Oximizer cannulas, individual flow meters and one mask is $632. The Sky Ox two-place system is $589 with cannulas and a mask.

Still, if you simply don’t have the need for regular oxygen use, we think these personal-sized bottles could make sense—especially if the investment drives you (or a passenger) to use oxygen. So many pilots and passengers are borderline hypoxic without even knowing it. Last, Aithre’s 47-liter bottle is just the right size for stashing in a backpack, making it versatile for other activities.

A version of this story originally appeared in our sister publication, Aviation Consumer. For more information, visit www.aviationconsumer.com. 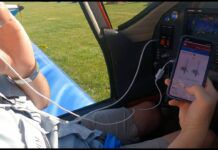 Print Your Own Parts