Avionics systems and accessories usually attract attention at the big show, and while there weren’t any real showstoppers this year, there were a few major announcements that caught our eye, even if we had to go looking for them.

Garmin kicked it off with yet another new GPS navigator: The $6995 GNC 355. In the August 2019 issue of KITPLANES® we looked at Garmin’s new GTX 375 and GPS 175 budget navigators—the former with an IFR-approach-capable GPS and Mode-S/ADS-B transponder and the latter just the GPS. While we thought the units offer decent utility and are smartly designed to save space in the radio stack—making them perfect for older Experimentals needing an upgrade—we wished there was a version that had a com radio. We didn’t have to wish for long because that’s just what Garmin delivers with the GNC 355 GPS/com. 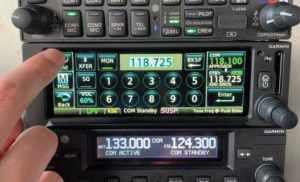 It was around 1996 or thereabouts when Garmin started cranking out the GNC 300XL. This was a TSO C129(A1) IFR approach GPS navigator, and as a bonus, it had a utilitarian moving map and a built-in VHF com radio. It had no VHF nav—strictly GPS. The GNC series was a clever idea and almost the perfect solution for backing up a traditional nav/com, or for more basic panels, it worked as the primary rig because of the built-in com. We’re glad to see this concept back as an option for both new and existing kits. Like the other two budget units, the idea with the GNC 355 is to replace aging navigators without having to do much if any stack rework. Maybe there’s an old Apollo GX60, King KLN89B or even a King KX155. The GNC should easily fit in without restacking.

The new series has Garmin’s Connext wireless interface for traffic, weather and flight plan streaming to and from a tablet. Like the GPS 175 and GTR 375, the new com-equipped GNC 355 has a 2-inch-high bezel, which helps differentiate itself from the larger GTN 650 navigator, nor does it have a VHF nav receiver. While this might be a deal breaker for those not willing give to up on ILS approaches and having to rely on WAAS approach guidance alone, we think this simplifies the installation. Who wants more antennas?

Garmin used its noodle and made the GNC 355 compatible with a wide variety of nav indicators—everything from Gamin’s own GI 106A/B to the King KI209 and KI525A HSI—even old Narco and Collins indicators. With a digital databus, the unit works with Garmin’s own G5 EFIS, G500 TXi display and the G3X Touch integrated suite, plus ones from Dynon, Advanced Flight Systems, and others.  The point here is that if you’re upgrading from an older nav/com or maybe found a “veteran” indicator on the shelf, the new Garmin GPS will accommodate it.

Of course, there’s some downside to the compact platform, especially compared to the larger GTN 650. At 4.8 inches diagonally, the GNC 355 display is comparatively small, but the savior is the wireless interface for tablets running the Garmin Pilot or
ForeFlight apps. Allow the GNC itself to be the data input and use the tablet for higher-resolution mapping, weather, and traffic information.

The uAvionix booths at AirVenture were packed layers deep with last-minute ADS-B buyers as the 2020 mandate was 23 weeks away—January 1, 2020. But high on the list of ADS-B equipage concerns is the developing ADS-B space-based Aireon tech in Canada (and the US aircraft that will fly there), which looks to require diversity systems, or those with dual antennas.

The effort to install that second antenna could easily blow a “budget” upgrade for kits that are already completed. So with a clever but obvious tech redesign, uAvionix is testing a second blade antenna on the current single-antenna style skyBeacon design.

Like the original skyBeacon, the skyBeacon X is an LED position light replacement, but has an integrated 1090ES transponder (and WAAS GPS), plus a baro altimeter. The company says it might be ready in 2021 and it hasn’t mentioned pricing, but uAvionix President Christian Ramsey hinted it will be budget-based. “We specifically designed the skyBeacon and tailBeacon to target a low cost of installation, and we are doing it again with the skyBeacon X,” he said in a news release.

If you haven’t been following along, back in January 2019 Nav Canada announced it will be implementing ADS-B airspace performance requirements in three phases. Phase 3, to be implemented no sooner than 2023, is the biggest impact on GA operations and will require ADS-B Out systems with two antennas—one on the top and the other on the bottom—of the aircraft. Don’t overthink the tech: Since Aireon is satellite based, an antenna on the bottom of the aircraft won’t do much for performance, or specifically, the aircraft’s ADS-B Out data update rate.

The skyBeacon X testing, so far,  shows that the new design can work well out on the wingtip for both ground and satellite signals. We’ll be following and reporting on this product and others moving forward.

Another Portable ADS-B Unit from ForeFlight

The market is saturated with stick-it-on-the-window ADS-B receivers, but ForeFlight brought its new Sentry Mini to the show. Priced at $299 and made by uAvionix, the product’s name suits it well—the device is 3.3 by 2.3 by 0.6 inches and weighs 0.1 pounds. Check that against the $499 full-size Sentry (introduced at last year’s show), which measures 3.25 by 2.25 by 1.25—still compact.

The main reason for the Mini’s slightly smaller footprint is it doesn’t have an onboard battery. You’ll need to plug it in to any 5-volt USB power source using the supplied cable.

The Sentry Mini is slightly scaled back on features compared to the full-sized Sentry. It doesn’t have built-in AHRS or the CO detector. It does have a built-in GPS receiver for providing position to iPads that aren’t so equipped.  If you plan to use ForeFlight for backup flight instruments, the Mini probably isn’t the device for you because it doesn’t have the AHRS sensor to feed the app. It does, however, support the full range of FIS-B weather and ADS-B traffic data.

We like that the Mini has onboard memory to support ForeFlight’s Weather Replay, which provides automatic storage of up to 30 minutes of FIS-B data. That means you can sleep the iPad and then receive a burst of updates when the iPad wakes.

If there is more than one iPad connected, each iPad will be synced to have the same data replayed. ForeFlight will also animate ADS-B radar, looping up to 30 minutes of radar while in flight. If there’s a rub with the Sentry Mini, it’s that it only works with the ForeFlight tablet app.

One of the biggest surprises on the avionics front was BendixKing’s announcement that parent company Honeywell purchased autopilot maker TruTrak. The acquisition of TruTrak gives BendixKing access to a wide range of products for experimental aircraft and will likely form a gateway to new product applications in the certified world, too.

TruTrak’s current boss, Andrew Barker, will continue in his role under the new ownership, and BendixKing will absorb at least some of TruTrak’s engineering staff. “Honeywell and BendixKing’s capabilities in the aerospace industry will accelerate the continued development of the products TruTrak has built from the ground up,” said Barker.

What we don’t know going forward is what impact this acquisition will have on prices, availability or future developments of Experimental-class products. It’s fair to say that right now the outlook for autopilot applications is bright, with all the major EFIS makers offering add-on servos that make up a complete flight-control system, in addition to stalwart Trio. Where TruTrak was once the go-to autopilot source for Experimentals, the rise of add-on systems has cut into its market share.

We like wandering the AirVenture Innovations Showcase building at Oshkosh because there’s always interesting stuff to see, even if some of it is never to be seen again. That won’t be the case with the utilitarian and smartly designed products on display from Idaho-based Aithre.

Two products from the company that caught our eye were the Altus portable oxygen tank monitor and an avionics display-compatible carbon monoxide sensor. The O2 monitor is the result of the company President Jim Ruttler’s struggle with seeing the behind-the-seat oxygen tank gauge in his Van’s RV-10, and running out of oxygen when he needed it the most.

The monitor is a simple upgrade to any tank and basically converts a portable oxygen tank into a smart device, with wireless (Bluetooth, of course) real-time monitoring of oxygen pressure, flow rate, pressure altitude and oxygen levels. It’s a smart system, triggering oxygen use reminders, low-level alerts and shutoff reminders on landing. Installation takes less than 15 minutes and consists of connecting a high-pressure tee fitting between the tank and existing pressure gauge and strapping the housing on using Velcro.

The device runs on four AA batteries, detects pressure changes within a 10-psi resolution, samples pressure every six seconds with a built-in pressure altimeter and throws a low-oxygen warning when it drops below 500 psi. The system is designed to work with Apple smartphones and iPads, and there’s an Aithre Connect app for monitoring trend data, plus there are audible Siri notifications that work with Bluetooth headsets. We think these are products with legs.

At its booth Aithre was showing both the $350 Altus O2 monitor and the $250 Shield eX avionics-integrated carbon monoxide detector displaying on an Advanced Flight Systems display. Using Bluetooth, the company said the sensors will also work with Garmin’s experimental version of the G3X Touch and Dynon’s SkyView. We like what we saw.

As we said at the outset, there were no legitimately eye-widening new products at AirVenture this year, reflecting the maturity of the industry as a whole and the avionics offerings therein. But that doesn’t signal entropy. Avionics shops catering to Experimentals report strong sales and continued demand for high-end, complete systems, and it’s possible that Garmin’s new retrofit-friendly offerings will get owners of older machines into more modern boxes soon.