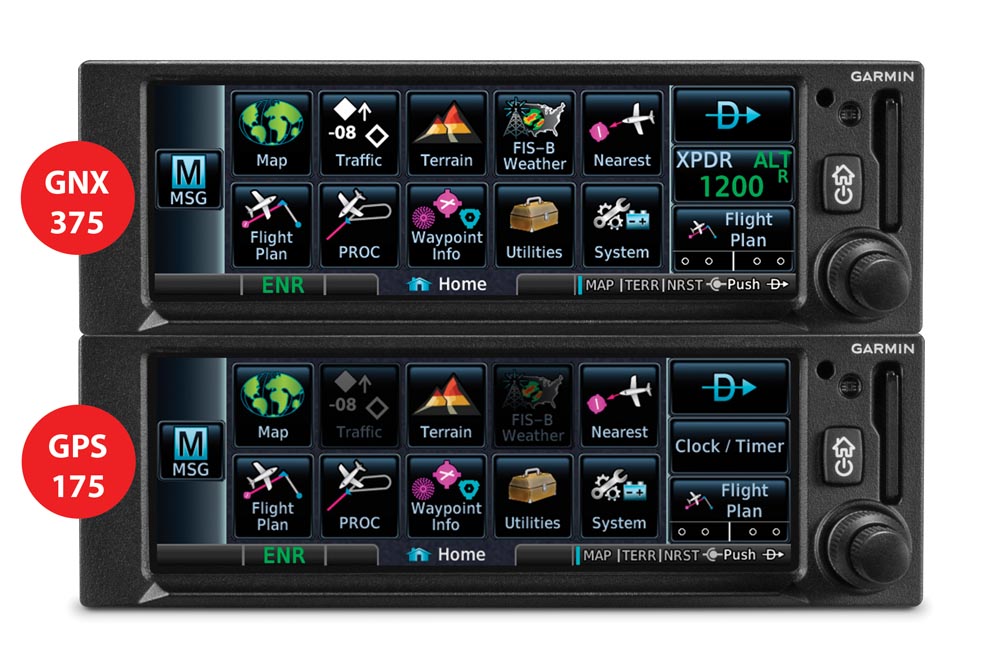 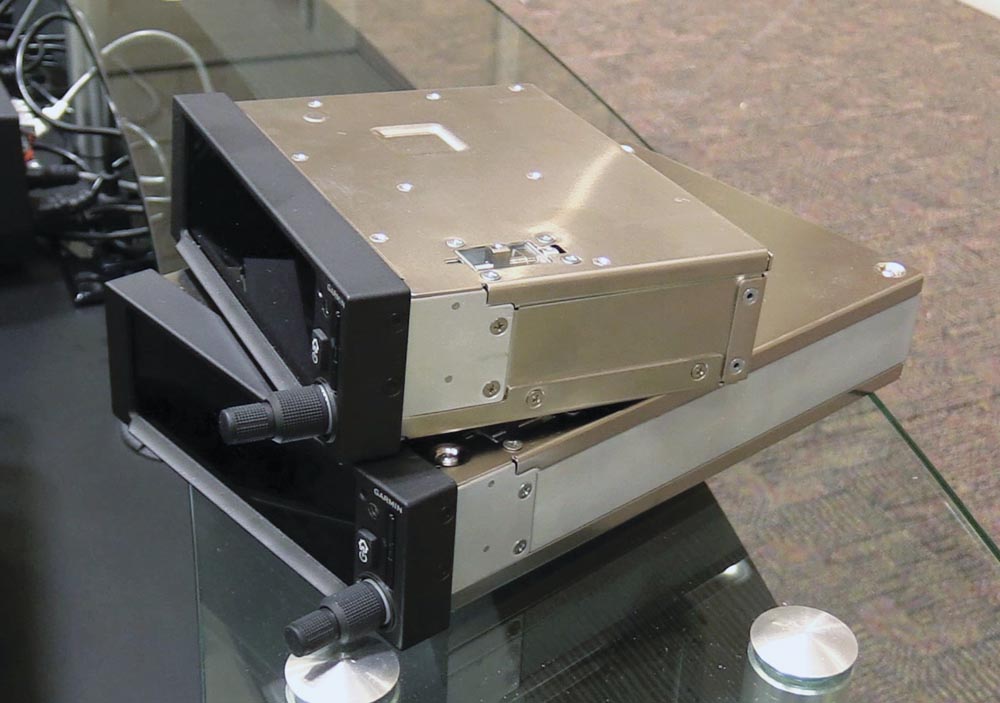 That’s the GPS-only GPS 175 on top, with the GNX 375 on the bottom. The key difference here is the presence of an integrated ADS-B-equipped transponder on the 375.

If you do, and also need a modern IFR navigator, the GNX 375 is the box for you. The GNX 375 combines the stand-alone GPS navigator with dual-link ADS-B In and Out in the form of a Mode-S transponder. Think of the GNX 375 as a pumped-up version of Garmin’s GTX 345 1090ES transponder meshed with an IFR GPS navigator in a single rack-mounted unit. The 1090ES version of ADS-B means the boxes are suitable for a wider variety of aircraft, including those that fly above 18,000 feet.

The entry-level GPS 175 is a navigator only (less ADS-B). Worth reiterating is that neither of these units have VHF com capability, so if you’re hoping to replace an aging GNS 430 with one of these new ones, they won’t give you the same capability. For builders intending to use EFIS-integrated com radios but need an IFR-approved GPS, either the 175 or the 375 will be a good fit.

Traffic is standard on the GNX 375 but also available if the GPS 175 is connected to an ADS-B In source.

From an interface standpoint, Garmin made the smart decision of designing the new navigators to work with a variety of vintage nav indicators, including the BendixKing KI 204/206/209, and even some long extinct ones from Narco. They’ll of course work with a traditional Garmin GI 106A nav head. This interface decision doesn’t have much impact on builders outfitting today but if you have a homebuilt with a seriously vintage stack, the ability to retain and reuse older indicators is a big plus.

Thanks to fully modern digital interfaces—including ARINC 429 and RS-232—the 175 and 375 work with modern EFIS units, including Garmin’s latest primary flight displays like the G5 EFIS and the G3X Touch integrated avionics suite. If you have an analog, it’s likely the units will work with that, too, plus Aspen’s PFD displays.

Terrain depiction is an important part of the GPS 175 and GNX 375 arsenal.

The other smart thing Garmin did was design the new chassis to fit in place of older vintage navigators. Here we’re talking about the King KLN 89/90/94 series, the Apollo GX 50/55, and even in place of a King KX 155 navcom. (Remember those?) The navigators are also designed to save space behind the panel—something every kit builder will embrace. The GPS 175 is less than 7.0 inches from the panel bezel to the connector backshell. Both units stand 2 inches high and are the standard 6.25 inches wide.

The higher-end GNX 375 is simply the 175 with the transponder saddled onto the back chassis. That makes it deeper—10.85 inches to the connectors—but everything else is identical to the 175. The GNX 375 weighs 3.2 pounds, and the GPS 175 weighs 1.3 pounds.

The GPS engine in the units have a total of 15 channels—12 GPS and three GPS/WAAS/SBAS. Both of these new units come with an antenna.

If you’re even vaguely familiar with Garmin’s GTN 650, the new navigators might fool you because they’re strikingly familiar. The 175 has keys and commands identical to the GTN series and also has the look and feel of Garmin’s Pilot tablet app—comforting to those making the transition from tablet to panel-mount navigator. But a closer look will reveal its smaller chassis. That also means a tighter screen area. The new navigator’s color touchscreen display measures 4.8 inches diagonal and has pinch scrolling and scaling—not exactly the best in turbulence or for fat fingers, but it’s workable. The display resolution is 732 by 240 pixels—offering a decent read in direct sunlight.

The units are full-featured navigators with many functions borrowed from Garmin’s higher-end GTN 650. Dedicated pages within the GPS 175 include a moving map, flight plan, nearest, procedures, waypoint information, and terrain pages, and the GNX 375 adds traffic and weather pages. Garmin has tweaked the feature set slightly from the GTN 650—for the better. The addition of a dedicated direct-to button on the touchscreen offers quick access to direct airport or waypoint navigation. There are also customizable data fields, and shortcuts on the moving map to pilot-selectable pages such as the nearest airport allow for quick, one-touch access to important information in flight. That’s real progress. 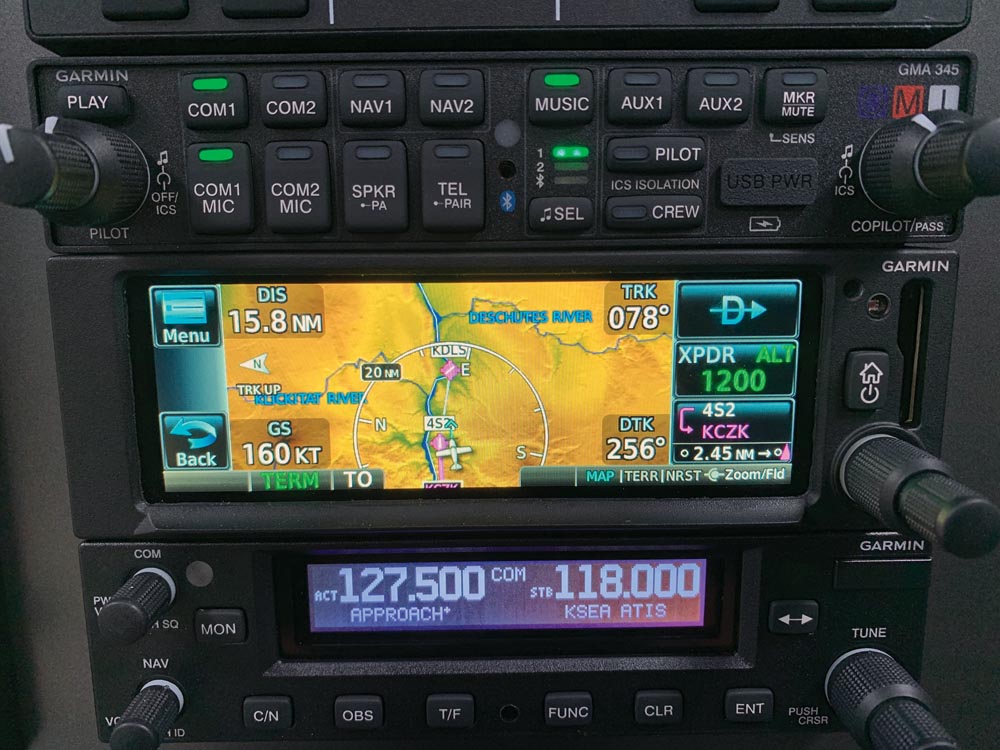 The GPS 175 and GNX 375 have updated graphics, a prominent direct-to action button, and other new features. The 375 also shows a live button for the Mode S transponder.

Stepping up from an older-gen navigator? The new ones from Garmin are worlds ahead. A feature called FastFind simplifies flight plan entry by applying predictive logic to suggest airports and waypoints using current GPS location, while Smart Airspace makes it more straightforward to identify pertinent airspace on the small moving map. The units also have Garmin’s SafeTaxi airport diagrams displaying runways, taxiways, FBOs, hangars, and other surface features that are relative to the aircraft’s location on the airport surface. The units don’t require magnetic heading input.

Of course, Garmin recognizes that these units will be used in conjunction with portable devices. We like that both boxes have Garmin’s wireless Connext network that uses Bluetooth to talk to peripherals, including Garmin’s 796/795/660 aera portables and the FltPlan Go app through a tablet. That means you can dump a flight plan from the tablet to the navigator easily. That applies to updating the database with the tablet, too, using Garmin’s Flight Stream 510 wireless card that’s inserted in the 175’s memory slot. 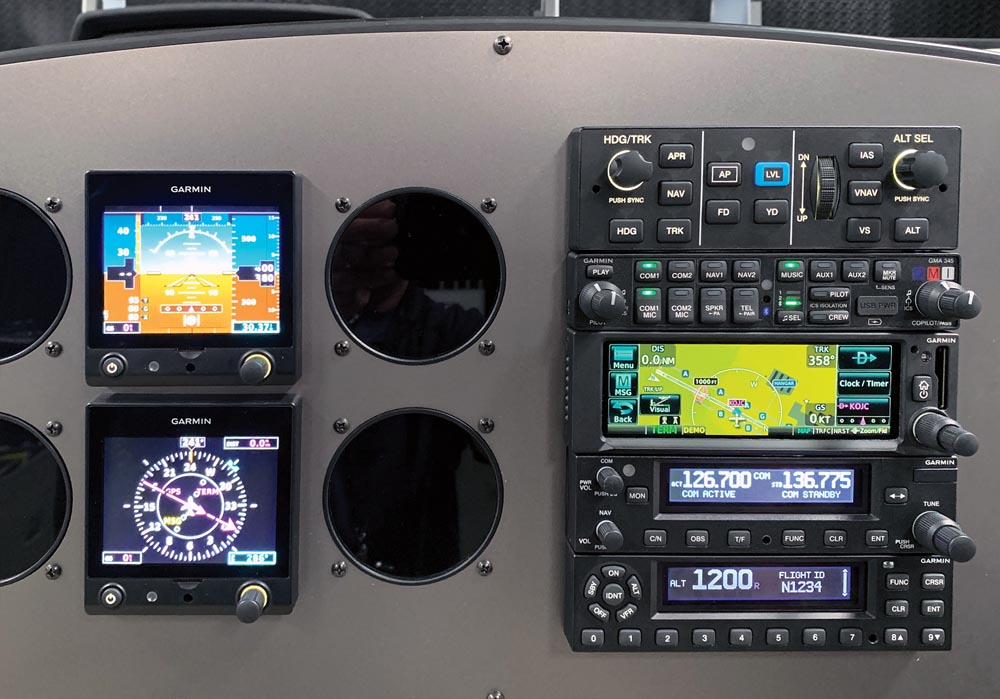 Designed to integrate with a host of modern avionics, the 175/375 twins can drive external displays, autopilots, and mobile devices through Bluetooth.

Traffic and Weather, But No Com

Although the entry-level GPS 175 doesn’t have ADS-B traffic and weather, it will still interface with Garmin boxes that do. This includes the GTX 345 series transponders and GDL88-series ADS-B transceivers. As we would expect, the units can display most all of the advanced features of the higher-end displays, including TargetTrend. This plots out vector lines for traffic threats for easier recognition.

As data and feature rich as these new navigators are, they are not full-on replacements for an elderly GNS 430 because they lack both VHF nav and com radios. Recall that the GNC 255/GNC 300 (and GX 60) had integrated coms, which was ideal for a lot of space-deprived panels. But for basic panels in need of a modern IFR GPS navigator—and mandate-compliant ADS-B—the GNX 375 is a good value.

If you need a com radio, you should compare the cost of a stand-alone unit against a full-up GTN 650, which has IFR GPS, a com, and also a navigation receiver with glideslope. The GTN 650 will take more panel space, of course, but not much. Garmin offers the $1199 GTR 200, the $995 remote GTR 20, and the $4495 GNC 255 navcom radio. You could, of course, use a variety of third-party com radios to go with the GPS—either panel mounted or remotely operated through your existing EFIS.

Garmin says the new navigators will be available by the time you read this and is allowing its dealers to sell the GPS 175 over the counter, without completing the installation. As with other Garmin products, we suspect many dealers will cater to kit builders by offering prefabricated wiring harnesses. As for the ADS-B-equipped GNX 375, the install might be more complicated, and builders might lobby the help of a qualified installer to get it right the first time.

Barnaby Wainfan - June 24, 2007
0
The author discusses the theory and effect of constant-speed propellers on piston-engine airplane performance, and compares fixed-pitch versus constant-speed props, effect on thrust HP and propulsion, the comprises involved in choosing a prop, how props perform in various conditions and phases of flight, how variable-pitch props work, and why a constant-speed prop is the best choice for high-performance aircraft.