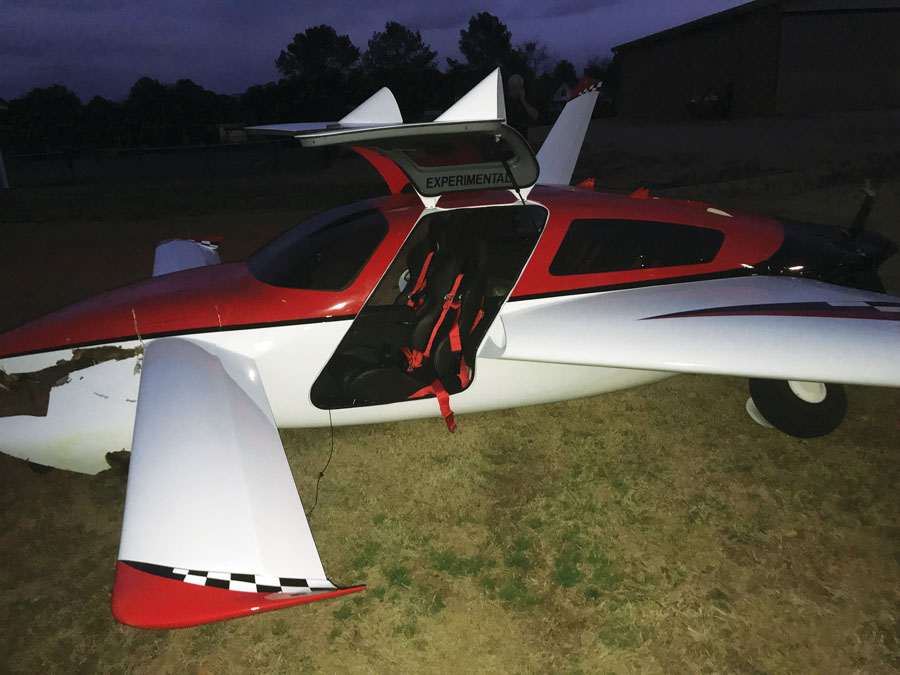 Both passengers got out under their own power with no injuries, a testament to the structure of the aircraft.

By now those of you who have been reading my columns for any length of time probably realize that one of my main themes is about having fun and keeping the fun factor alive and well. After all, that’s why we are involved in amateur-built aviation. They aren’t built to be working machines, as the FARs clearly prohibit us from doing anything other than education and relaxation, except for SLSAs, which can be used in a flight-training environment for hire. However, every once in a while I witness this fun activity rear its ugly side and take the fun away. It bothers me, as I like to understand things that don’t work as they should. It’s probably the mechanic side of me that wants to understand what’s broken and how to fix it.

The statistics show that we are getting better in the world of amateur-built aviation as it relates to fatalities. The EAA works closely with the FAA in tracking the data on a monthly basis, and there’s even a not-to-exceed target, which we beat last year. That’s great news, although there are times when I wonder what it would take to make the number equal zero. Most of the accidents fall into a couple of categories, such as flight into IMC by non-rated pilots, loss of control (including low level aerobatics), and modifications to fuel systems. Many of the great programs such as the EAA Technical Counselor programs, Flight Advisor programs, and the adoption of FAA Advisory Circular AC 90-116, Additional Pilot Program for Phase I Flight Test, are definitely having a positive impact. 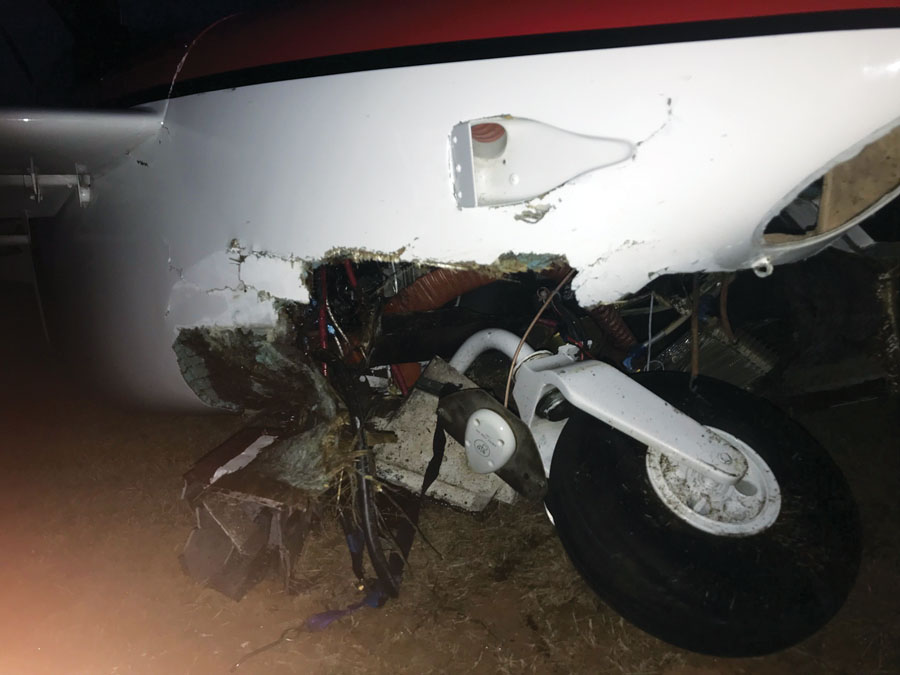 Damage to the front of the aircraft was extensive. 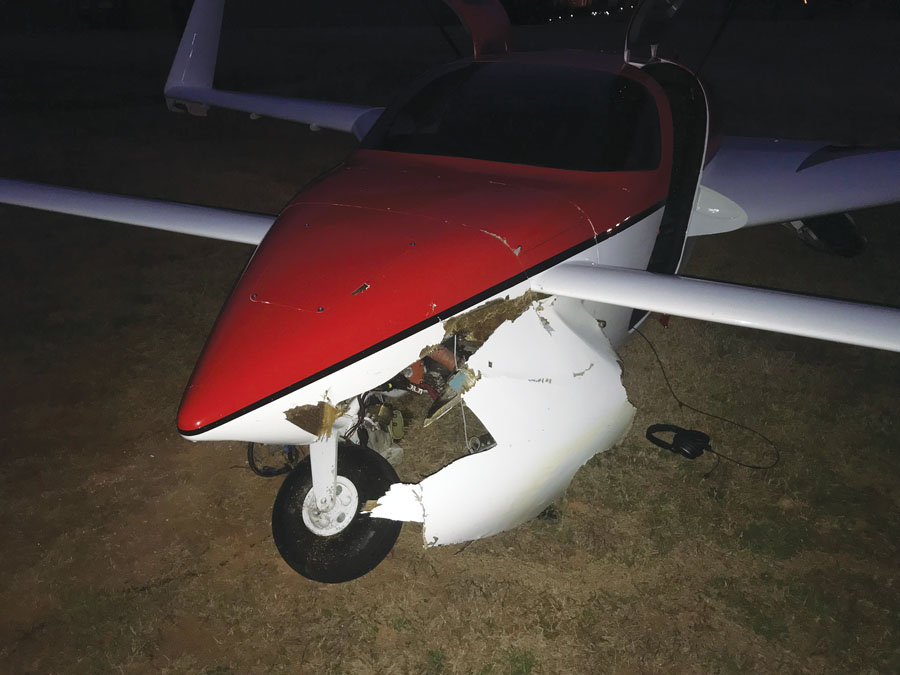 The fatal accident scoreboard in my mind doesn’t tell the whole story. There’s still a lot of bending and breaking of airplanes on a pretty regular basis, not all of which gets reported. Some accidents are caused by improper maintenance, but a lot of them are still due to improper decision-making by the operator. Whenever I happen to witness one of these events, I always walk away with the same thoughts: why did it happen, could it have been prevented, and what can I learn from it?

As I mentioned earlier, one of the things that attracts many of us to amateur-built airplanes is that the majority of them are really fun to fly. Some have controls that are balanced with such harmony you may actually feel you are really flying, rather than muscling a machine through the air. Many amateur-built airplanes open up whole new adventures, such as flying to the backcountry and landing on sandbars to go camping or fishing. The ability to put the latest and greatest avionics toys in our cockpits has brought some good excitement of its own, including entertainment for the passengers.

It is exactly this freedom that allows us to construct each and every one of our E/A-B aircraft as we individually desire. However, that freedom can also bring with it some traps, especially for the person transitioning from the certified aircraft world. As we know, there are no requirements on where we locate such things as the landing gear handle or how we might indicate to the pilot that the landing gear is in an unsafe position. Things that might be readily discernible in the cockpit during the day may not be quite the same at night. While transition training is a really good idea and usually required by insurance companies, it usually consists of a set number of hours and takeoffs and landings. In the big leagues, transition training includes some grueling training in simulators that mostly consist of emergency recognition and procedures, and even some rote memory procedures that have to be executed flawlessly. 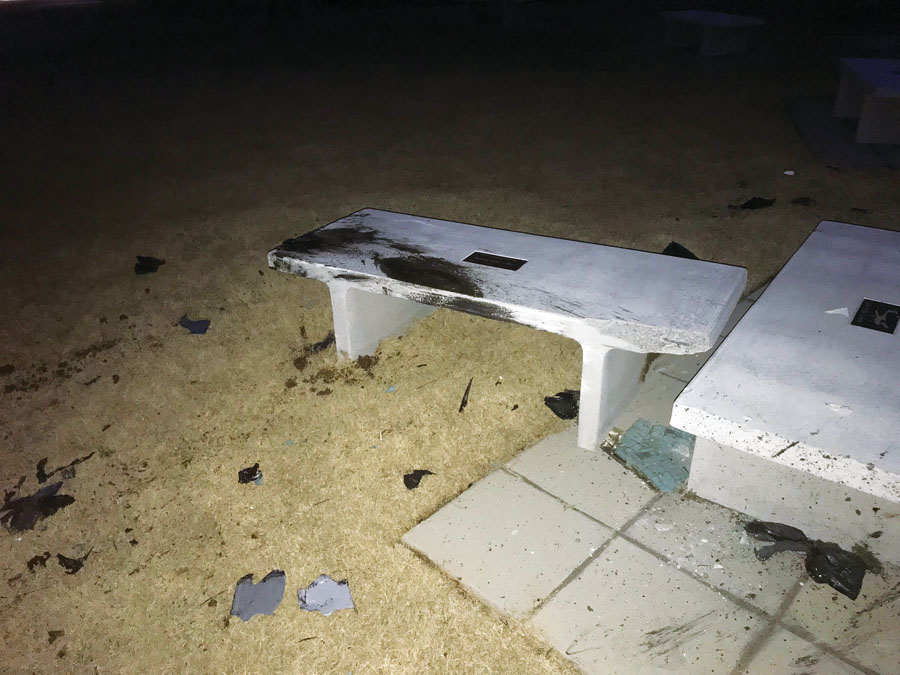 The people standing around the cement bench had to scramble for their lives. The impact moved the bench over 30 feet!

Cockpit familiarization would be a good place to start when picking up a newly purchased airplane. Unfortunately, what usually happens is that the buyer travels to the place of purchase, an orientation flight happens, the deal is made, and the next thought is the trip home. Can you see the chain begin to happen here?

And so it was one night a few weeks ago that I heard a different-sounding airplane fly down the runway at our place. Before I could even get to the deck to take a look, my son called and said there was a pusher-type aircraft doing touch and goes. Ah, that explained the different sound, as we don’t have any pusher aircraft currently at our field—probably because most of them aren’t stellar performers on grass runways, but that’s another story. I grabbed the binoculars to see if I could tell what type it was since it was now flying downwind. It was getting to be dusk and I was unable to discern exactly what kind it was through the binoculars. I would have to wait until it came around again.

I eventually heard it making what sounded like a long final approach, although my view was blocked by a neighbor’s hangar, so I could only listen. I focused the binoculars to where I thought it would first appear and waited. I eventually heard a very loud bang, and thought to myself, that was a really hard landing. The next view I had in the binoculars was one of an airplane spinning around on the ground and facing backwards to the direction of travel, along with a cloud of dirt. I immediately set the binoculars down and started running toward the airplane, which I now recognized as a Velocity XL.

There were a number of other people there, all of us arriving at about the same time. It turns out they were standing next to the runway waiting for the new arrival. I would find out later that they came pretty close to getting hit by the errant airplane, and in fact a video showed they had to really scramble at the last second to avoid getting killed. Luckily, the pilot and passenger were unhurt, but the airplane was totaled, as you can see in the pictures. It was the first flight home after the new owner purchased the airplane in Florida earlier that day. 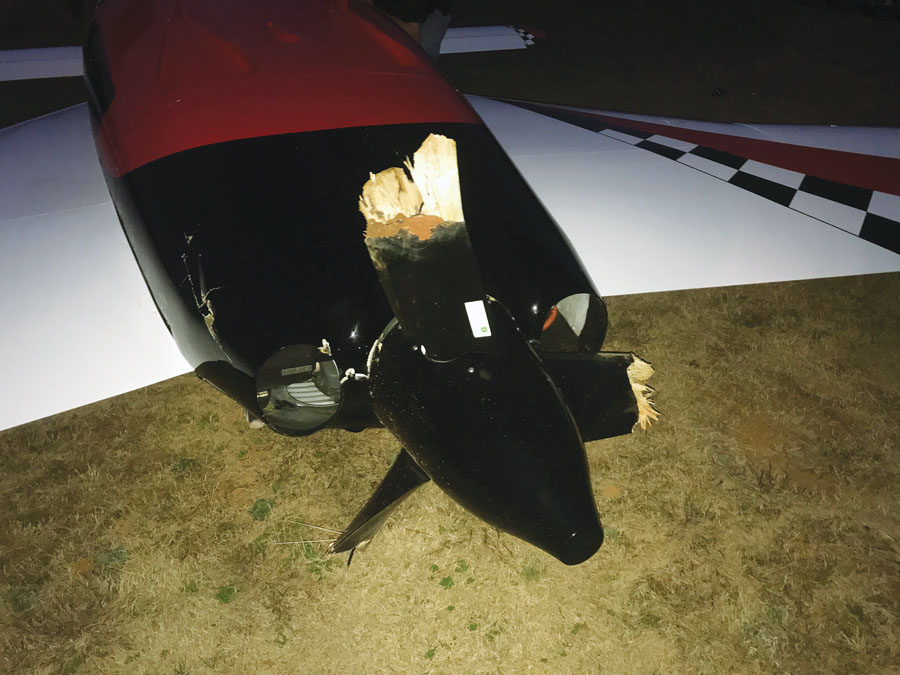 All three blades were quickly ground off when the rear of the aircraft contacted the grass runway.

The pilot had 20+ years of experience. He had been flying a Cessna 206 in and out of our community. The 206 certainly has a much different control feel than the Velocity XL and also has a much steeper approach angle. There is also one other major difference: It has fixed landing gear. Here goes the accident chain in motion.

So here is the new-to-Velocity pilot on the first trip home, trying to beat the weather and approaching darkness. A landing approach viewed from the cockpit of a 206 looks very different than the view in a Velocity, so a go-around was executed—a very-well-done go-around that led my son to believe he was doing touch and goes. Now throw in some extra stress due to the go-around, along with too many people talking on their handheld radios, and the distraction is enough for the pilot to forget to lower the gear. A flight that should have ended with a celebration of a new toy acquisition didn’t quite have a happy ending.

Another example associated with low time in type occurred when a local pilot flipped his newly built SuperSTOL onto its nose during his third hour of flying it. He was a retired airline pilot who hadn’t flown in many years and had obtained his tailwheel endorsement three days earlier. After doing a number of touch-and-go landings, the incident occurred on the final landing that was going to be a full-stop landing. He reverted to muscle memory from years of flying heavy jets and used firm braking upon touchdown, the one thing the SuperSTOL does not need, as the brakes are extremely effective. No more fun here for a while either.

The overall lesson is that perhaps we can learn from the team that has the best safety record in aviation, the airlines. The results achieved by their methodical approach to transition training and aircraft familiarization speak volumes. Maybe if we tried to emulate their example in the world of amateur-built aviation we could increase the safety record, along with the fun factor.