Backups? That question probably ranks right up there with the primer wars when it comes to our amateur-built airplanes. For those who are weight conscious, they are non-starters. After all, who wants to carry around all of that extra weight when you may never need it? For some, the ability to have some peace of mind that there are backups available when needed is worth the weight penalty. For others, the more gadgets the merrier, and I have to admit that there have been times when I wonder if I am in this last group. However, I have prided myself on 100% dispatch across my 11 airplanes over the last 35 years. I have also come to rely on the RV-10 as a tool to get me where I need to go as a DAR and for prebuys as I don’t want to be the reason for a lost sale. As a result, I do carry around a lot of backups. 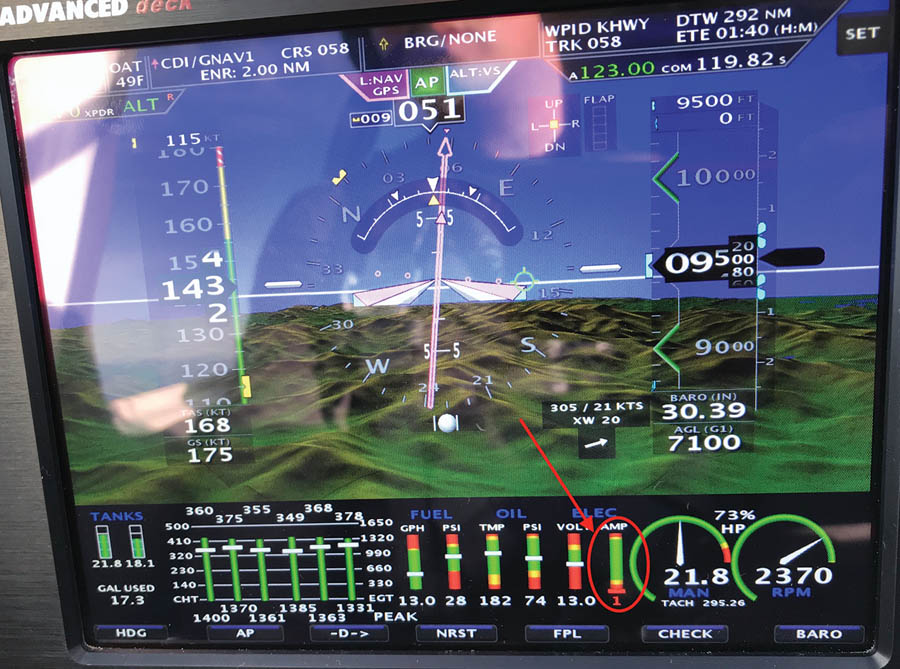 The amps indication of 1 definitely indicates a problem. In the second photo you can see the standby alternator is working. Amps is now normal, and the voltage is at the lower 13.6 volts instead of 14.4 volts primary alternator output. 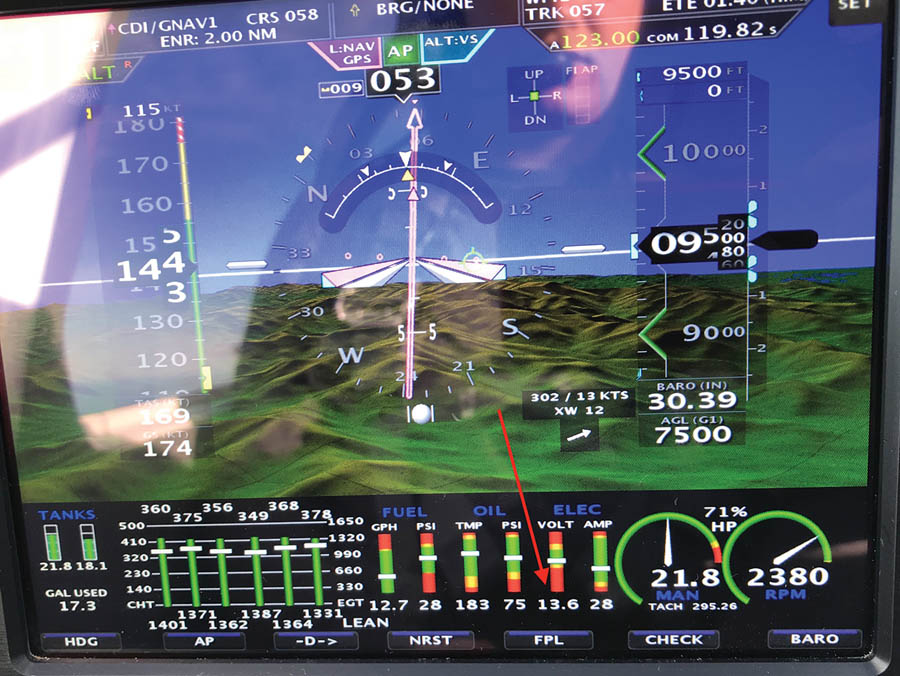 As an example, I have a dual ADAHRS system for the Advanced Flight Systems EFISes, as well as an ADAHRS in the Avidyne IFD550. Even though I no longer leave the Dynon D2 attitude indicator on the dash permanently, I still do place it there when I am departing into a low ceiling. No sense having it in storage if I need it. I also carry a handheld com radio when IFR/IMC. Even back in the day when I had a vacuum system in the aircraft, which was as late as the 2000 build on my RV-6, I had a backup vacuum system.

I also have the EFISes tied to a backup battery—one of the TCW 6-amp batteries. It isn’t very heavy and allows the EFISes to remain powered up during an engine start so I have engine instrumentation readily available. I don’t believe in a dual battery system as I find the batteries are heavy, and batteries today seem to be much more reliable than they used to be, especially if properly cared for. I do believe in dual alternators and a way to bypass the master solenoid as that is still a single point of failure.

Most of us also carry an iPad flight application, such as ForeFlight or FlyQ, which adds another backup for moving maps and even ADAHRS if equipped with one of the Wi-Fi or Bluetooth devices such as Stratus, Stratux, etc.

One of the hard lessons I learned in my technology days was that all of the backups in the world weren’t any good to you if they weren’t regularly tested. I know many of you do have the backups I mentioned, but have you really tested them? I test mine quite regularly, some on the ground and some in flight. As an example, I test the standby alternator about every third flight. I fail the primary alternator and bring the standby on line to verify it really can carry the flight load. It’s nice that the newer standby alternators are quite capable. The B&C vacuum pad standby alternator I have on my RV-10 is capable of 40 amps, which is much better than the SD-8 we all used to install. The SD-8 really made it mandatory to immediately shed all non-essential electrical loads and start looking for a place to land as it was really only capable of 8-10 amps at full throttle. 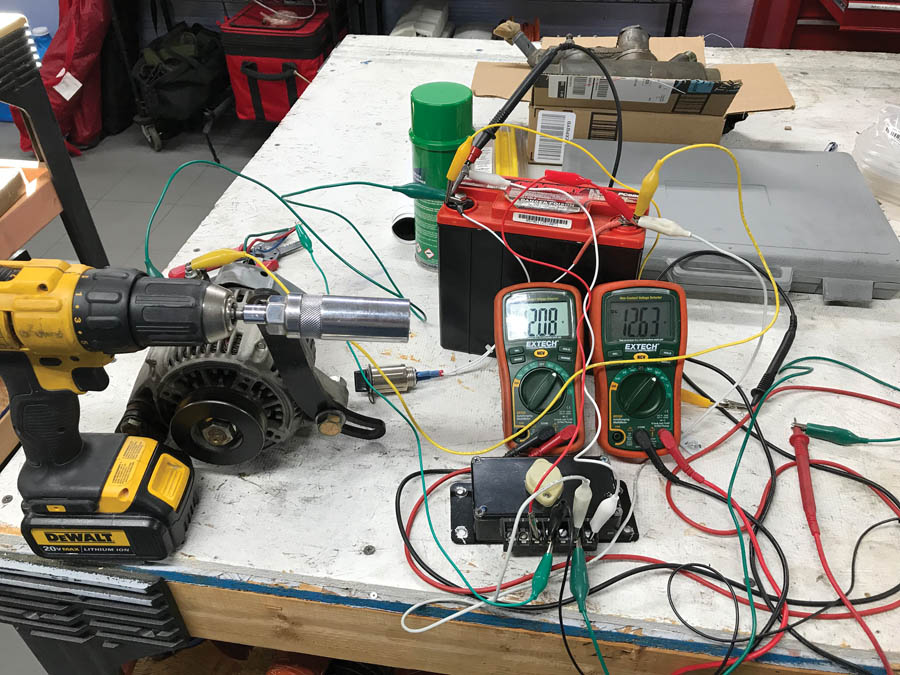 This is the way I tested the regulator on the bench for the correct field output voltage. Once I had the correct voltage on pin 4, I even spun the alternator with the drill and got 14.4 volts output.

Most recently, having a nice, capable standby alternator made a difference in being able to complete a flight. I was scheduled to make a trip to the D.C. area to license an RV-14A and perform a tech counselor visit on an RV-12. My son, who is just a few hours from his pilot license, thought it would be good cross-country experience for him, especially learning how to navigate around the complex airspace surrounding D.C. It was going to be a long, day trip with a little over 7 hours of planned flight time.

I flew the first 30-minute leg to pick him up, just north of Atlanta. On this leg, just as we were departing the traffic pattern, the alternator warning light started blinking, and the amps gauge showed zero amps. Hmm. Standard procedure is to cycle the alternator switch, which we did. Guess what, it worked! Well, for about 1 minute anyway. Then it dropped offline again and wouldn’t come back. So now it’s time to really use the standby alternator. It came on line very nicely, delivering the full 40 amps for a minute or so, and then dropped down to the normal flight load of 28 amps. 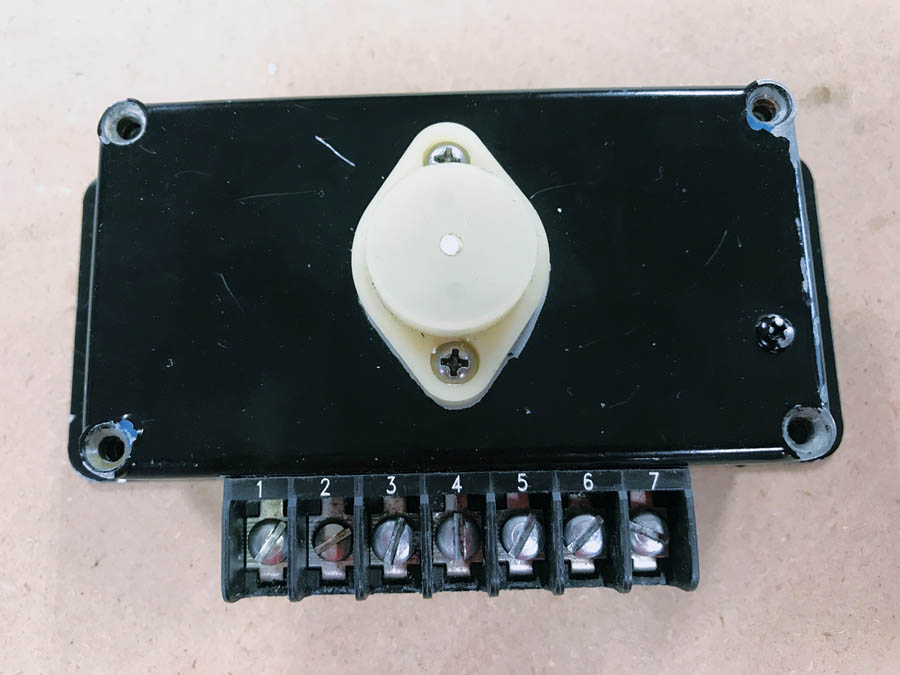 Lucky for me, the old LR3-B and new LR3-C regulators from B&C have the same form factor. 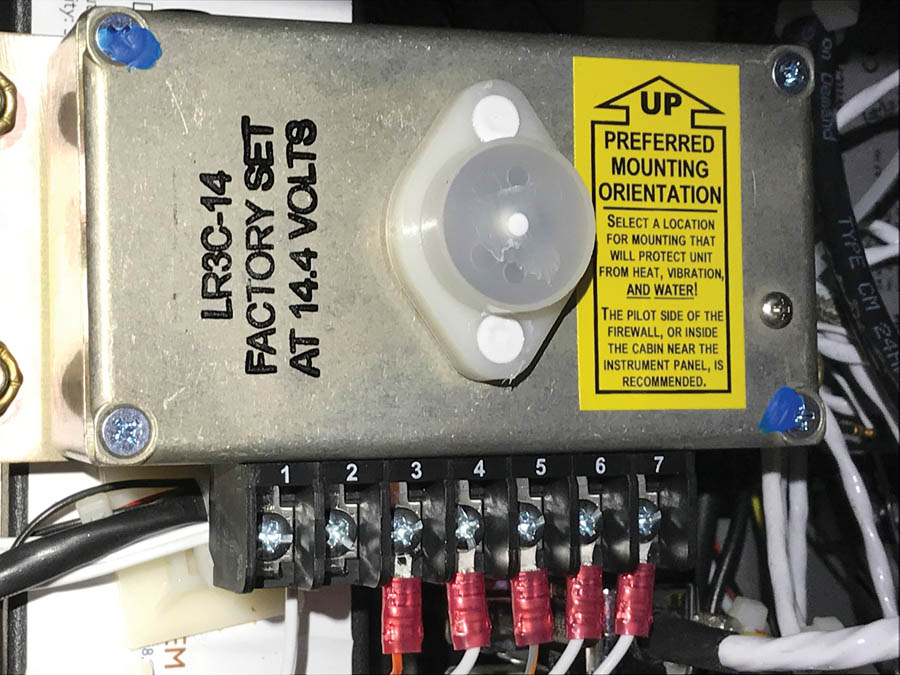 Now it was decision time. There were people counting on me to get to D.C., and I had already moved the trip once due to weather. When I installed the standby alternator, I made the comment that if I broke a belt on the main alternator in Alaska, I would probably be comfortable flying all the way back to Atlanta (VFR, of course!) rather than pulling the prop on the road to install a new belt. For this trip it was solid VFR all the way, with 25,000 overcast forecasted all day. Even though I had tested the standby alternator for 30 minutes at a time in the past, this would be a real test.

We made the decision to continue with the trip as there were no other indications of any other problems. The backup system was working as designed and tested. Interestingly enough, over the next few hours we tried bringing the main alternator back online, and sometimes it would work for a few minutes, and then it would quit again. Once it even worked for about 40 minutes before it quit. But throughout the next three legs and almost 7 hours of flight, the standby alternator performed wonderfully. We did take the cowling off at the first destination to make sure everything was secure. 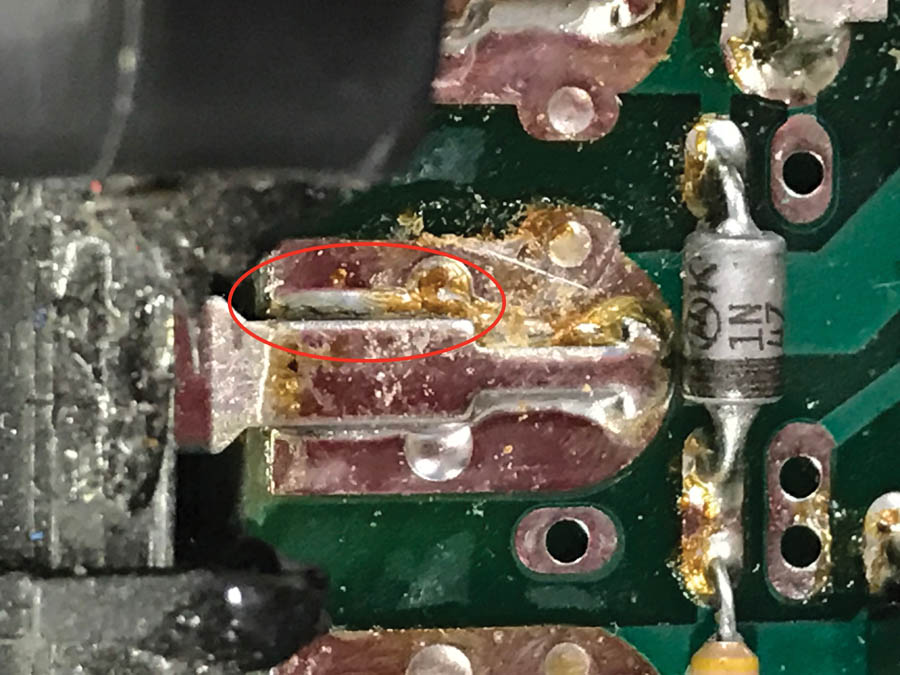 If you look closely, you can see the fine crack in the solder joint along the terminal connection to the PC board. I resoldered all of them to be sure and then tested it on the bench again. I’m pretty confident it is fixed.

As a matter of fact, the very next morning I needed to make a 30-minute flight to work on an RV-12, so I made two more legs on the standby alternator before I had a chance to delve into the cause. I do know many pilots who now use the vacuum pad standby alternator as a primary, and I see why.

When I finally got a chance to troubleshoot the problem, it was pretty clear that the regulator was the culprit as there was no measured voltage to the field wire on the alternator even though I could measure input voltage to the regulator. Luckily, Aircraft Spruce had one in stock, and Carol was available to go get it while I worked on another customer’s airplane.

I did notice that I had an LR3-B regulator, and the new one was an LR3-C. Mine was about 10 years old, but luckily the form factor was the same. I removed the old one and installed the new one, albeit in a better place for future replacement and voltage adjustment if necessary. A quick ground run and subsequent test flight showed it was all fixed. Yeah!

My curiosity always gets the best of me, and I like to know the cause of failures. I rigged up a test system on the bench with a battery, alternator, and the old regulator, just to make sure I could duplicate the problem. Once it was set up, I measured the field voltage and it was at 12 volts, like it should be. Uh-oh. Did I have an aircraft-wiring problem I had overlooked? When I measured it again to be sure, the voltage was at 4 volts. Well, that’s interesting. Furthermore, when I hooked the field wire to the alternator, the voltage dropped to zero. If I wiggled or pushed on the connection right at the #4 field terminal, I could get the voltage to change. Ah-ha! Now it was acting intermittent, just like in the airplane. So I disconnected everything and opened up the regulator.

I’ve had some good results in the past with Rotax regulators in finding bad solder joints. I was beginning to think the same problem was occurring here. Sure enough, under a bright light and 10X magnification, I could see some movement. I soldered all of the big terminal connections and could no longer duplicate the problem with a bench test set up!

With regards to the backup question, this experience made it all worthwhile to me. I was able to complete an important trip with very little risk, if any, and the backup system performed wonderfully. Also, my aspiring-pilot son, Nick, experienced a real system failure and the associated decision-making, as opposed to a simulated failure and a quick discussion.

What could have been a frustrating day turned out to be fun for both us, and the pilots at the other end. One got a brand new RV-14 licensed, and the other is not far from finishing his RV-12. Nick got to see some really pretty scenery, as well as how to circumnavigate the complex D.C. airspace. Did I tell you he asked how we used to do that without GPS? I had to explain about using a compass, clock, and landmarks. Even that was fun!