In the March 2019 issue, I shared my experience of a primary alternator failure on my RV-10. Corrective action was to engage the standby alternator, which worked, and I confidently continued the trip. I was able to do that because I had constantly tested my backup alternator over the course of the last 500 hours. That got me thinking about having a discussion on the rest of the backup systems we use and how we might adequately test them, along with asking ourselves if we are properly prepared for the immediate mission. 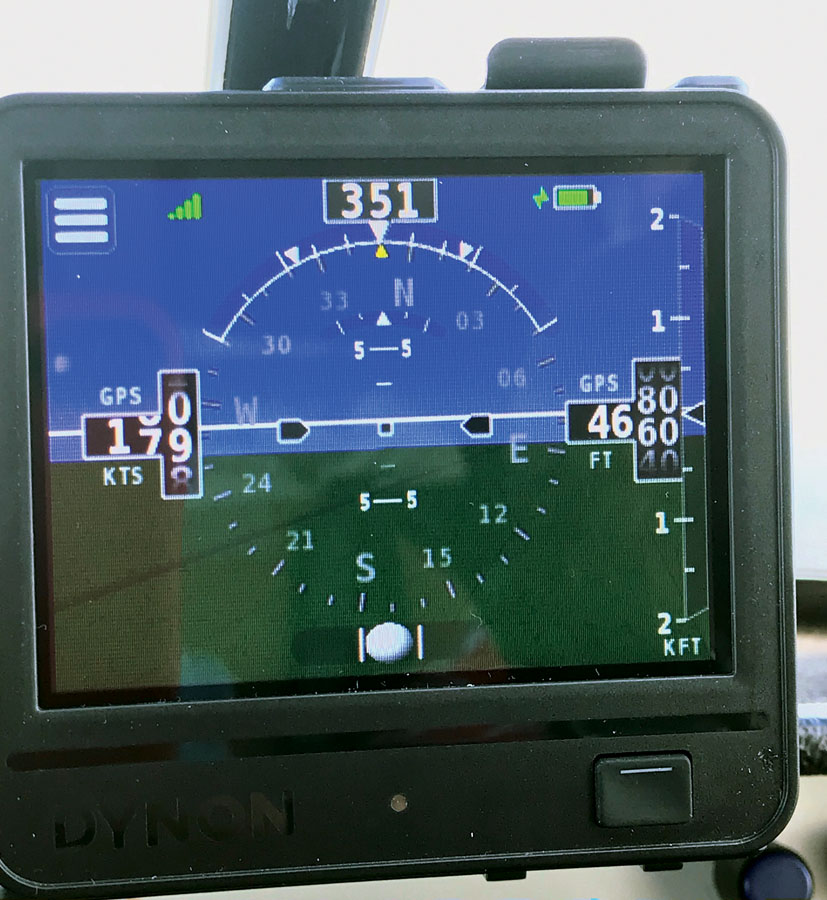 This portable Dynon D3 Pocket Panel is always mounted to my instrument panel when I’ll be flying IFR. I also mentally brief myself on how to distinguish between a failed ADAHRS or my own failure.

So why would we want to do anything different for a particular mission? Well, some examples I can think of have to do with differences in mental preparation and cockpit preparation when departing into IFR conditions versus VFR conditions. If departing into low IFR conditions, which may occur only a couple times a year, I make sure that I have all backup attitude systems ready to go. The Dynon D3 Pocket Panel is not always mounted to the instrument panel, but it certainly is mounted for this situation. I also mentally brief myself on how to distinguish between a failed ADAHRS (air data, attitude and heading reference system) or my own failure. If you haven’t experienced the “leans” while in instrument conditions, then you haven’t been flying long enough. An airplane that accelerates and climbs as fast as an RV can easily induce spatial disorientation if not careful. So I make it a practice to climb out more shallowly and use smaller bank angles for an instrument departure. Might as well stack everything in my favor that I can! 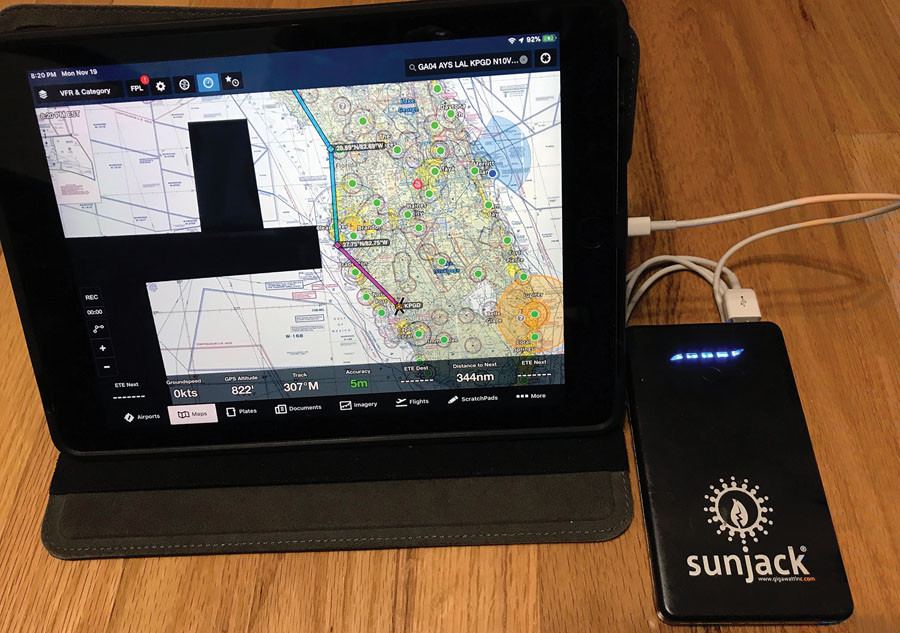 Portable backup battery packs are quite powerful and really small. Sometimes on a critical flight, it might make sense to take one along.

To be clear on why I might depart in low IFR conditions, it is usually only when there is a thin layer that I know I can get above quickly and be on my way, yet it is not too low such that I can’t get back if needed. I do keep the approach for the nearest airport loaded and ready to activate. Yes, I practice this scenario during VFR conditions. It’s a good scenario for the instrument proficiency check, too.

I’ve set up my RV-10 cockpit for HOTAS (hands on throttle and stick) so I don’t have to make any unnecessary head movements at a critical time. I can swap to departure frequency by pushing a button on the stick grip, hit the IDENT button on the stick grip when requested by Departure, and engage the autopilot with another button on the stick grip. Flaps are brought up by flipping a switch on the panel right next to my thumb, which is on the throttle quadrant, and the fuel pump is turned off at the top of the climb by my thumb as well. 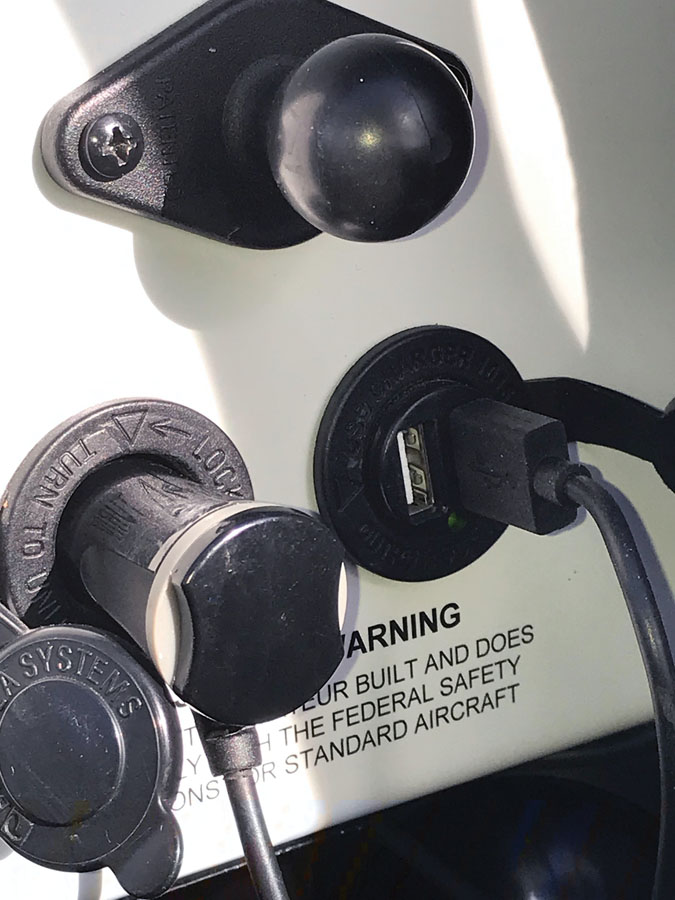 I like to have two separate sources of charging power. I have had traditional socket chargers fail at times. If both should fail, having a backup battery for the cockpit is a real plus.

That kind of departure and mission really takes some planning and execution, along with trust in the aircraft. Other missions can give us a false sense of security because we just might be making a VFR flight to the next airport for some cheap fuel. Pretty simple, huh? Let’s think about that for a minute. What if the destination airport has a control tower? When was the last time you swapped a headset in flight? How many of you carry a handheld radio and can get to it when you need it? When was the last time you checked the batteries in the headset for a full charge? If you don’t carry a handheld, how many of you can remember what the various light signals mean?

Sometimes we are at a low enough altitude that the cellphone might work to call the tower. Have you thought about having their number preloaded into your cellphone prior to the flight? Or how about just squawking 7600, or was it 7500, and departing the area? Hmm…perhaps we should brush up on lost-com procedures. 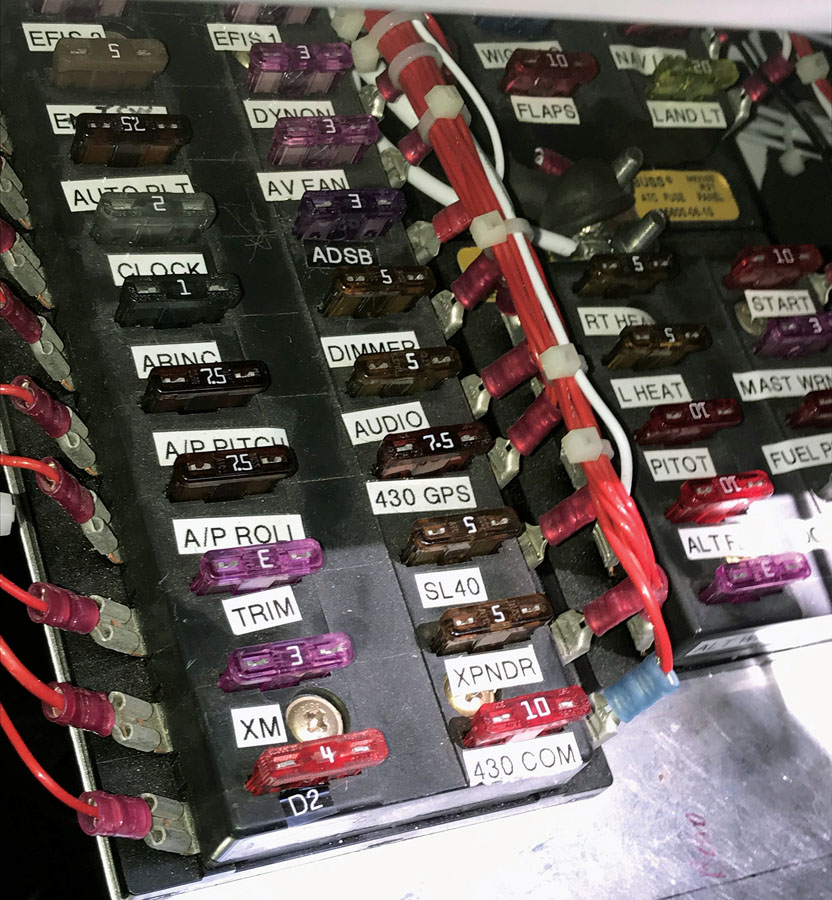 It has become common practice to use fuse panels in our airplanes, which eliminates a lot of weight when compared to traditional circuit breakers. The cons are they tend to be installed in out-of-the-way drop-down panels. You do carry an extra set of fuses for night flight as per the FARs, right? Could you get to them if you needed to?

Here’s one for you—how many of you bother to carry any paper in the cockpit? Gee, with all of the GPS displays and iPads in the cockpit, why should we do that? Well, I know of someone who was circling in the OSH holding pattern melee last year when all of his aircraft GPS systems failed at the same time, and then his iPad failed because he forgot to plug it into the charger. He didn’t have any idea of where the other potential airports were. I am not saying to carry a bunch of paper, but perhaps printing the sectional area of your destination and taking it with you might be a good practice. I know you are probably wondering, how could all of the GPS systems fail at the same time? Well, it can happen. A bad GPS antenna can fail in such a way that it outputs enough spurious signals to disrupt the other systems. I’ve even had it happen in my airplane. 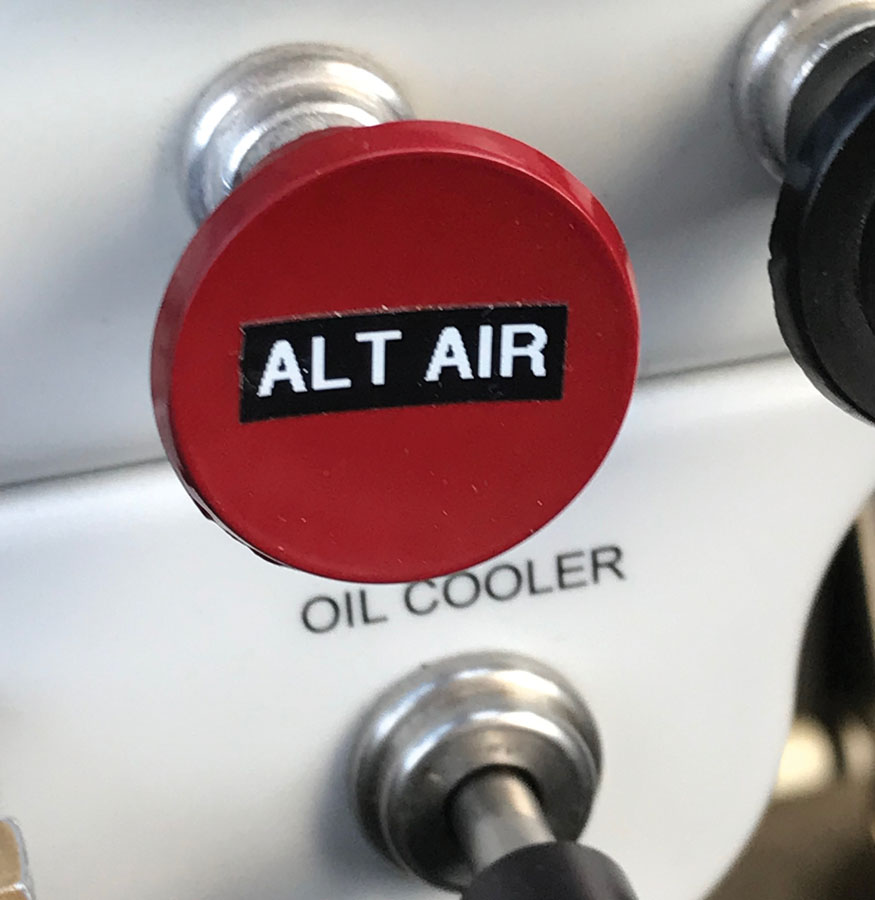 How many of you really know when and how to use the alternate air and alternate static functions? Have you tested them during Phase I and then regularly throughout the year? Some alt air controls have to be reset once you land. 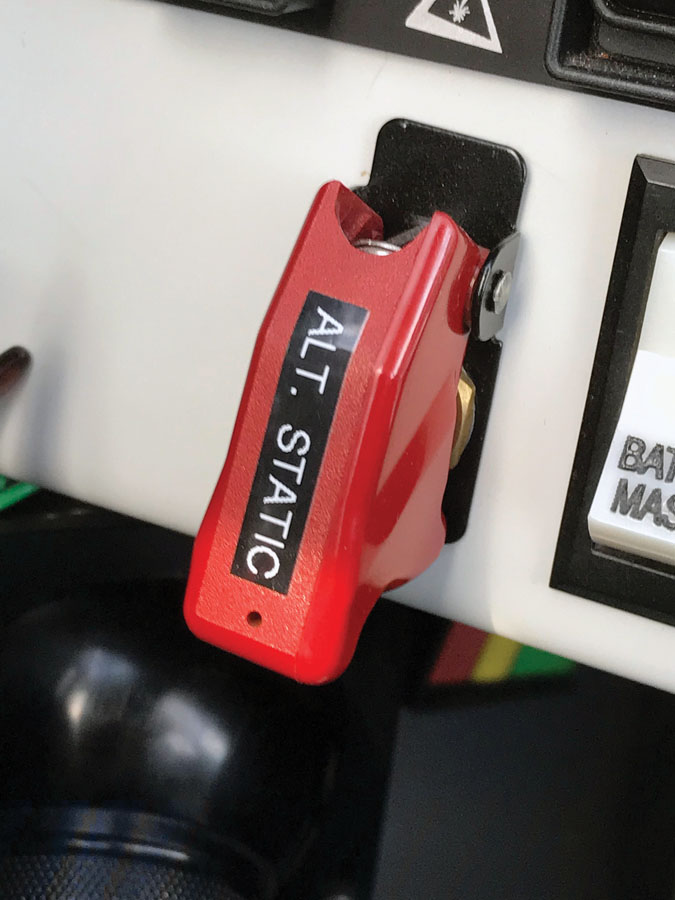 Always check the alt static source in flight with the autopilot off. You should see an increase in altitude and a slight increase in airspeed when activated (non-pressurized airplanes). If you see no change, there is a good chance that your static system has a leak in it.

Let’s talk about charging systems and the products for which we use them. Have you regularly tested your iPad in flight to see how long it will work without being connected to the charger, and then how long it might take to power back up and be useful again? You might be surprised. What if the charger you’ve been using all along goes bust at the same time due to the extra load? Yes, I’ve seen that happen as well. So I carry a backup battery that is capable of charging the iPad. It’s amazing how small they can make batteries these days. The peace of mind they bring is not even worth the weight consideration. I also have wired two different sources of charging in my airplane, each on its own circuit. One uses a traditional 12-volt socket charger, and the other is a straight USB.

By the way, one area I see as a potential problem is the failure to test the backup batteries used for our EFISes. I give huge kudos to Dynon in this area, as their EFISes will remind you that it is time for a backup battery test. Once executed, it will also give you a pass/fail grade on the battery. 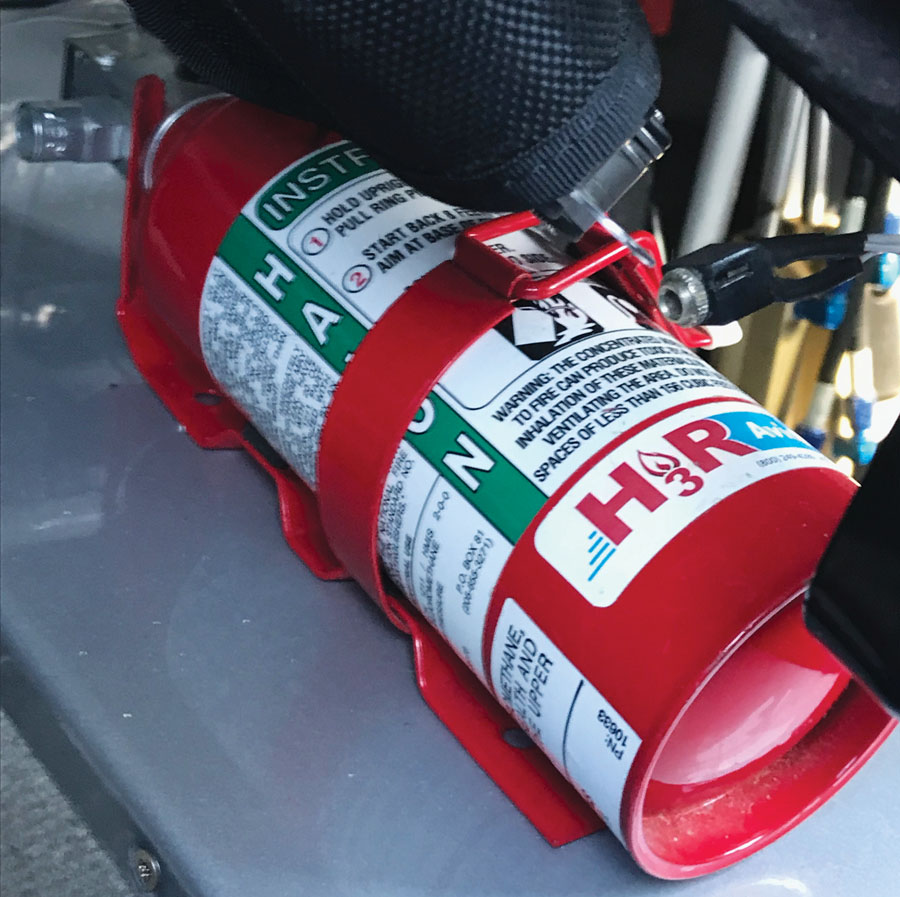 When was the last time you checked your fire extinguisher for a proper charge? Have you put it in a place where you can get to it with a cockpit full of smoke burning your eyes?

Other systems that can go wrong also need to be tested regularly or perhaps checked early in the flight to make certain they work. In my RV-10 I have wing tip tanks that give me an extra hour and a half of flight time. I make sure I move that fuel into the main tanks as early as possible during the flight, just in case there is a failure of the electric transfer pump, which would make the tip tank fuel unavailable. I also make certain that I don’t depart on a flight where that extra fuel is an absolute must, such as needing to get over a long distance of low ceilings, even though I might be in great VFR on top. I carry it more for peace of mind, and I know I always land with too much fuel, but sweating fuel is not something I care to do, nor would I care to explain why I ran out of fuel.

Have you ever thought of carrying an extra headset? I always do, especially for long trips. It doesn’t have to be an exact duplicate of your primary headsets, and cheap used ones are always available on the open market. It’s not fun when your mic fails just as you poke into the clouds and need to acknowledge ATC. Nor is it fun when your passenger can’t hear you, and you just departed on a long trip. 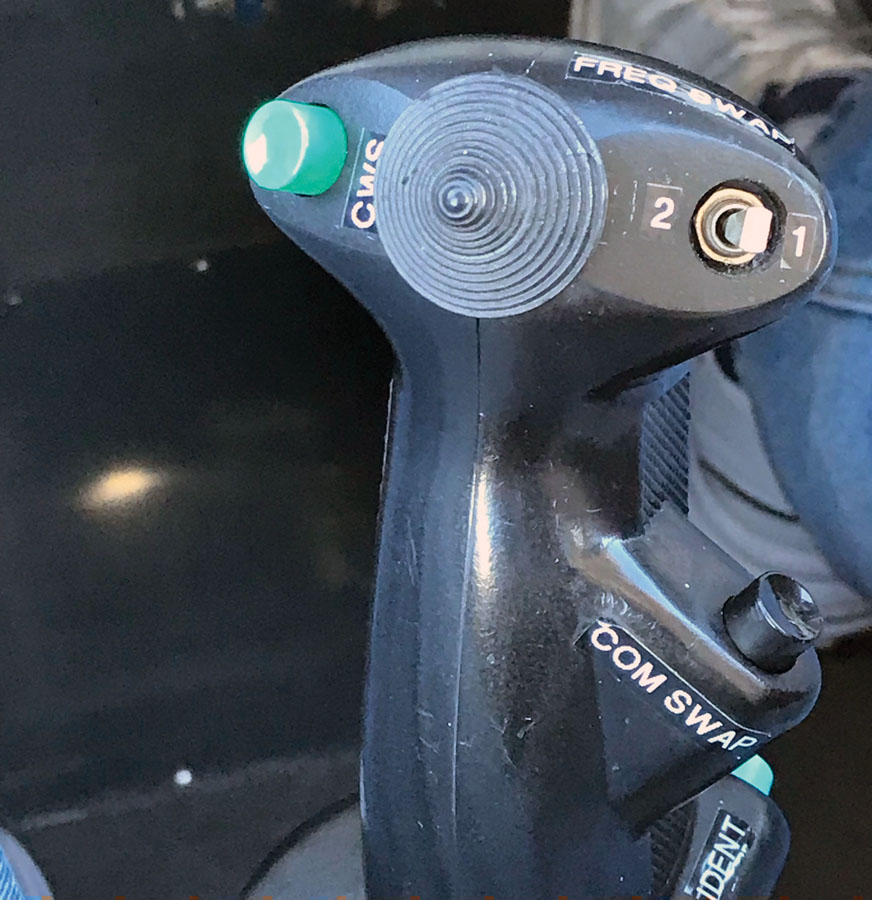 A functional stick grip, properly labeled, can be a real asset in instrument conditions. I see way too many of them that aren’t labeled though!

With spring and summer approaching, do you sometimes fly late in the day to avoid the afternoon heat and bumps? Even on a short local flight, there’s always a chance you’ll be delayed, which means you might be flying in the dark. If it’s been a while since you’ve flown at night, consideration should be given to some of those skills and cockpit behaviors that might have gotten rusty. Things that come to mind are ensuring that the onboard flashlights have fresh batteries in them (you do carry a flashlight, right?) and that you know how to get to everything in the cockpit by memory and feel if it all goes dark. Take time to practice that scenario in your unlit hangar a couple of times.

For those first few flights, try to get out and practice takeoffs and landings between sunset and the first hour of darkness before coming back for the first time in the dead of night. Night landings are different and harder as we get older. It seems our aging eyes just can’t get enough light, so how about practicing some without the landing lights? A few months ago, I had a very good friend whom I hold in high esteem prang his RV-10 on a night landing, severely damaging the nose, prop, and engine. He built his RV-10, is a retired fighter pilot and squadron commander, and is very proficient in his airplane.

It can happen to the best of us, and it sure impacts the fun factor.

Marc Cook - December 15, 2011
1
Lycoming makes a push into the Light Sport Aircraft market with its new O-233 engine. Though similar in appearance to the venerable O-235, it’s an entirely new design poised to take on some heavy competition. By Marc Cook.