I fly my Zenith CH 701 from my airfield into a variety of airports, many with no services-not even wheel chocks-and certainly no step ladders. Before returning home, I like to know if I need to stop and get fuel for my next flight. But having fuel tanks in the wing, it is a bit tough to check the fuel level with my measuring stick. I do not trust fuel gauges, so I contemplated my options. This may sound a bit outbound, but being a fan of MacGyver, I decided to build a combination step stool and wheel chock. I scrounged up some -inch PVC pipe and fittings, a 10×14-inch piece of half-inch plywood, four X1 blocks, three 6-32 wingnuts, one 6-32×1.5-inch screw and 10.5 inches of threaded rod (See Figure 1). The fabrication of two end frames is described below. Separately, these can serve as wheel chocks, or connected together they can be legs for the stool.

Drill a 5⁄32-inch hole in the center of each T (See Photo 1). Then, by hand, countersink the hole inside the T with a 3⁄8-inch drill. (This makes it easier to insert the threaded rod into the T from the opposite side. See Photo 2.) Sand the end of one of the legs about 3⁄4 inch up the outside to allow it to easily be inserted into and removed from a cap. Slip on a cap and drill a 5⁄32-inch hole completely through the cap and the leg as shown in Photo 3. (This is where we will store the threaded rod and two wingnuts during flight.) Sand both ends of the crossbar so that without too much difficulty, it will slip into and out of each T on the end frames. 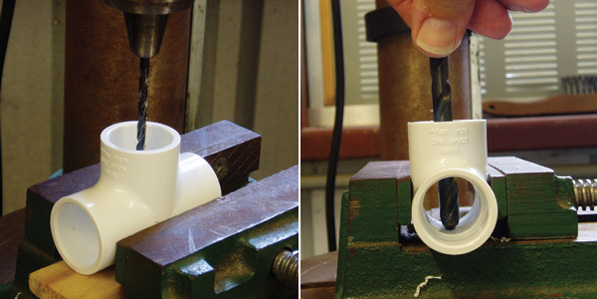 Glue the end pieces into the opposite sides of the Ts and then glue each of the legs into an elbow. Glue caps to the remaining three legs. Temporarily, place the crossbar into the center hole on one of the Ts and glue the elbows/legs to the end pieces with each cap touching a vertical surface and with the T about an inch out from the surface. (This offsets the legs a bit. See Photo 4.) Repeat this procedure to make the other end frame. 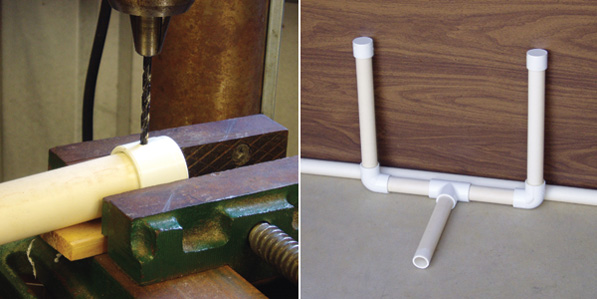 With the crossbar in the end frames, slide the 10.5-inch threaded rod through the end frame Ts and secure with the wingnuts. Invert the frame, and center it on the plywood. Drill pilot holes in the blocks and plywood as seen in Photo 5. My blocks are snug enough with the crossbar to keep it in place; otherwise, the plywood will stay in place once the stool is upright.

Photo 5: Drill through blocks and plywood. Photo 6: Attach plywood to blocks below.

From above, countersink the holes in the plywood and then attach the blocks to the plywood using carpenters glue and drywall screws (See Photo 6).

Alone, each end frame can serve as a wheel chock (See Photo 7). For wheels smaller than those on my CH 701, both end frames can be used to block a tire. 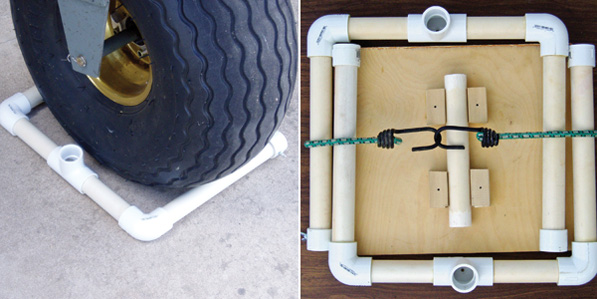 Photo 7: The end frame is used as a chock. Photo 8: For flight, secure with bungee cord.

For flight, the threaded rod and wingnuts are secured in the leg with the removable cap, a 6-32 screw and wingnut (See Photo 8).

The dimensions provided here are for my Zenith CH 701 and may be altered as long as stability is not overly compromised. The combination step stool and wheel chock is simple, lightweight and functional.

Jim Weir - January 22, 2009
0
If you need a horn to sound when the airspeed drops below a certain level or when the power is cut and the landing gear is still up and locked, an electronic circuitry solution is the lightest, most reliable and most cost-effective way to go.