With satellite datalink weather as commonplace as airspeed indicators, lightning detection systems are all but forgotten boat anchors. But a modern system thats installed properly might still earn its keep. While shops are removing Stormscope systems to make way for big-screen integrated glass, most vintage models just aren’t worth the investment. Here, a review of whats good, bad and questionable in used sferics.

A Note on Installation

Because sferics weather-mapping systems detect electrical discharge activity, the installation and placement of the components-particularly the antenna-is critical. Youll want the antenna to be out of the ground-return current path between the battery and alternator. Aircraft skin currents can alter performance, too. As a rule, the antenna should be placed no closer than 5 feet from strobe lamps and power supplies, 3 feet from autopilot and trim servos, at least 1 to 2 feet from transmitting antennas, and at least 5 feet from fluorescent lamps and ballasts. Further, static buildup and the ultimate static discharge from plastic lamp covers, fiberglass housings and windows can alter performance-to say nothing of the challenge of fitting a Stormscope to an all-plastic, non-lightning-protected homebuilt. Staying within these criteria is often a tall order on small airframes, but if the installation is compromised, performance of the system will be as well. Many shops have a skin-mapping device that aids in finding a noise-free location on the airframe. It might be worth it to lobby their help before you mount the antenna.

Given the level of integration thats present in modern avionics, overlaying lightning data over current flight plan and other moving-map data puts the final touches on a useful picture. But the only way to do that is with a remote system, of which there are two: the L-3 Avionics WX500 Stormscope and the high-end and limited WX1000E Stormscope processor. There’s also the Avidyne TWX670, but its so new the odds of finding a used system are nearly nil, and it only plays on Avidynes displays.

The WX1000E with Arinc 429 outputs has been around for a long time and is designed to present on EFIS displays. Its still a common player in high-end integrated avionics suites found in many jets, but a scan of the used market reveals plenty of the older BF Goodrich WX1000 processors. As a result, its easy to get stuck with something you cant use. There are multiple flavors of the WX1000, and for remote play any old WX1000 processor simply wont do. It must be the 429 E flavor box to overlay data on an EFIS. Moreover, modern display choices are quite limited. For sure it will play on the Bendix/King EFIS 40 and also on the KMD series of Bendix/King MFDs. In fact, we only mention the WX1000E because we recall an owner buying one on eBay only to find out it didn’t have the digital outputs required for overlay on the EFIS 40 in his Lancair. Further, the unit wont play on any of the Garmin displays, because software was never written to accommodate this unit. On the other hand, there are plenty of KMD540-series MFDs on the used market, and one of these teamed with the correct WX1000E is a viable option. Expect to pay several thousand dollars for the processor (the unit costs $16,600 new) and likely another couple grand for the KMD display. Again, don’t be fooled by non-Arinc flavors.

The L-3 WX500, on the other hand, has a liberal display interface and can play on anything from a Garmin GNS 430 to a Sandel EHSI and most all MFDs using RS232 serial data. A used system (antenna, processor and usable installation kit) wont come cheap, because shops simply don’t have much reason to remove these systems during an upgrade.

The WX500 is a popular seller in the salvage market, which isn’t necessarily a bad thing. Just be careful of the NY163 antenna; there’s no repair on it. One owner bought an as removed system from a salvage dealer, and it turned out the previously wrecked aircraft slid into a swamp, submerging the antenna in muddy water. When the installing shop sent the system to the factory for testing and certification, the antenna was found to be waterlogged. A replacement antenna costs $950. Ouch. 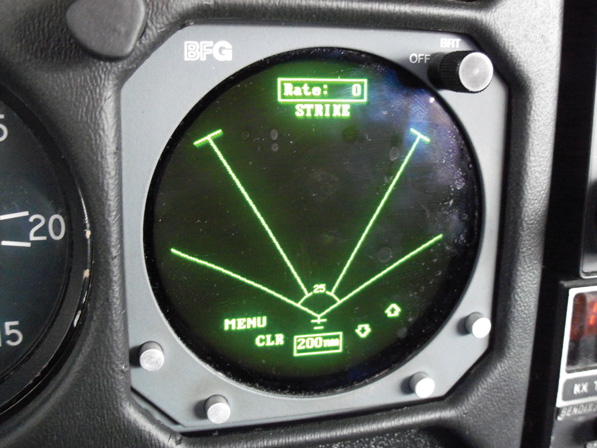 The Stormscope display, just one piece of the puzzle.

Still, the WX500 can display lightning at ranges between 25 to 200 nautical miles, and has a cell and strike mode, with a strike rate counter for measuring intensity. The processor weighs 2.5 pounds and is reasonably compact at 5.6 inches high and 12 inches deep. It has multiple outputs, so it can drive more than one display. There’s a caveat, however; when interfacing with the Garmin GNS 400 and 500 series navigators, lightning data cant be displayed on the GPSs map page unless the system is heading stabilized or with a so-called heading bootstrap. This synchronization is fed from most mechanical HSI systems and often requires a 26-volt AC, 400 Hz inverter. Without this synchro interface, you’ll need to live with the data being displayed on the dedicated Stormscope page within the GNS unit. Not the end of the world, but not optimum either. Expect to pay nearly $3000+ for a quality used system.

Investing in any two-piece system (that is display/processor and antenna) thats older than a WX950 Stormscope is questionable given factory repair costs and repair capabilities. Think of the WX950 as a WX500 but with a dedicated CRT display (the WX950 wont play on any MFD, however). This is a fine system, but you’ll need a full-size instrument cutout or equivalent space for the display, which is nearly 12 inches deep. The system accepts heading stabilization, and has cell and strike mode. There’s 360 or 120 selectable views with a maximum range of 200 n.m. Its a fine performing system. There are some on the market for about $3000.

The budget WX900 was a low-end system with LCD display and 100-mile range. It wont accept heading input, and the display is a difficult read. Insights SF2000 Strike Finder is a worthwhile choice as long as its a later model system. Earlier sensors in this system were problematic. Be sure to check the serial number and mod status with the factory to see what it will take to bring it up to current specs. Some units have a heading module that bolts to the back of the unit, solving the heading input dilemma.

As for the vintage systems that litter the used market and eBay? We called L-3 Avionics and were referred to the Fort Lauderdale repair facility that handles repair on older systems. When we inquired about the repair status of anything older than a WX950, we were told: All the old junk is handled down here. This is representational of the WX8, WX9, WX10, WX11 and WX900 series. The techs did say the repair facility is accumulating a fair supply of replacement parts cannibalized from unserviceable systems. Consider that the flat rate labor cost for a WX10A is just shy of $1000. The WX900 at $678, and its LCD display is obsolete. A WX11 display repair will run $978, and its display runs $944. There’s no repair on antennas, and new ones for these systems don’t exist. These flat-rate repair costs simply don’t make good sense given the age of these systems.

With a good eye you can score a good deal on modern pre-owned sferics gear, but repair costs can turn that good deal into an unexpectedly heavy expense. Many shops have bench test equipment for popular models, but most field service is limited. Theyll ship the system off to the factory, and thats where used sferics equipment gets pricey and questionable. You can see why the advent of datalink weather has been hailed by so many homebuilders as a great deal.

Larry Anglisano - November 7, 2010
0
Which portable VHF transceiver comes out on top after a side-by-side test in the field?