To a pilot, taking off seems to be a simple maneuver. You track down the runway, accelerating until the airplane reaches liftoff speed, pull back on the stick, and off you go. For the designer, its quite a bit more complicated. To effect a smooth takeoff, the airplane must transition from being supported and stabilized by the landing gear ground-reaction forces, to being supported by the wings lift, and trimmed by aerodynamic forces. All of these factors are changing progressively throughout the takeoff.

A tricycle gear holds an airplane at low angle of attack on the ground. To take off, the airplane must rotate nose up to give the wings the angle of attack to generate lift. Making sure the pilot can achieve a smooth takeoff rotation is one of the major considerations in the design of a tricycle landing gear.

Proper nosewheel loading is essential to getting a smooth takeoff rotation. The loading on the nosewheel is determined by the position of the main landing gear ground-contact point relative to the center of gravity of the airplane. The further aft of the CG the maingear is, the more load will be carried by the nosewheel.

Light nosewheel loading makes it easy to rotate, because the elevators do not have to generate much force to overcome the load on the nosewheel. However, it is possible to make the nosewheel loads too light. An airplane with a very lightly loaded nosewheel will have a tendency to porpoise as it taxis over bumps. It may even lift the wheel off the ground periodically. This makes the ride uncomfortable, and also makes nosewheel steering ineffective. If there is little weight on the wheel, the tire will tend to skid when it is turned to steer the airplane. This is less critical on an airplane with a free-castering nosewheel.

The nosewheel loading on an airplane with a wide CG range will vary greatly depending on the loading of the airplane. The nosewheel may be lightly loaded at aft CG, and loaded heavily when the CG is near the front of the range. This can cause the airplane to have significantly different takeoff characteristics at different CG positions.

Takeoff rotation is an unstable process. Before rotation, the majority of the weight of the airplane is carried by the main landing gear. The maingear is behind the CG, so the force on it tends to drive the nose down, loading the nosegear.

To rotate, the pilot deflects the elevators to produce an aerodynamic nose-up moment. When this moment is large enough to overcome the nose-down moment caused by the ground-reaction force on the maingear acting behind the CG, the airplane will rotate.

Once the nose starts up, the forces acting on the airplane change. As the wings begin to produce lift, the load on the maingear decreases. As the upward force on the maingear decreases, the nose-down moment it causes decreases. As the airplane rotates, the CG also moves aft relative to the contact point between the mainwheels and the ground, further reducing the nose-down moment being the upward force of the wheels. All of these changes tend to increase the rate of nose-up rotation.

Throughout the rotation the pilot adjusts the elevator deflection to capture and hold the proper attitude for the liftoff. If this is done properly, the weight will shift gradually from the wheels to the wings. The airplane is in trim when it lifts off, and it climbs away smoothly. Ideally, the airplane should leave the ground at the proper angle of attack, with zero pitch rate. At lift-off, the weight shifts entirely to the wings, and the airplane flies away.

The amount of elevator required to hold the nose up decreases as the nose rises. If the pilot holds constant elevator deflection or stick pressure and does not compensate, the airplane will take off with a significant nose-up pitch rate. This is undesirable and can be dangerous.

A significant safety problem can arise if there is too much weight on the nosewheel. The pilot may not be able to rotate the nose up until the airplane is going fast enough to lift off, and may need full up elevator to get the nose to start coming up. If this is the case, the rotation and takeoff can become difficult to control. When the nose finally comes up, the airspeed is high enough so that the lift of the wing offloads the wheels rapidly. The nose-down moment from the wheels disappears quickly, causing the nose-up pitch rate to increase rapidly.

The pilot must first pull up elevator to get the nosewheel to unstick, and then push on the stick to arrest the nose-up pitch rate. This is difficult to do precisely and can lead to two nasty possibilities. If the airplane lifts off, pitching up with decaying airspeed, it may stall. If the pilot overcompensates for the pitch up and pushes too hard on the stick, the airplane may nose back down toward the runway. Either situation is difficult to control and can lead to a dangerous low-altitude pilot-induced oscillation (PIO) or stall.

Single-engine pushers are particularly susceptible to this condition for two reasons. The designer has the problem that the CG moves a long way from the empty condition to the fully loaded condition. If the maingear is far enough aft so that the airplane does not fall over backward when empty, the load on the nosewheel tends to be too high for smooth takeoff rotation when the airplane is loaded. Second, there is no propeller slipstream over the elevators to help them raise the nose.

Several pusher homebuilts have had problems with takeoff rotation. It contributed to the fatal crash of the Dean Delt-Air 250 delta-wing prototype in the 1960s. The Dean got to a very high airspeed before the elevators were able to lift the nosewheel. Once they did, the pitch up developed too rapidly for the pilot to control.

One way to help alleviate the nosewheel liftoff problem is to use wing lift to reduce the amount of weight carried by the maingear at rotation speed. Setting the airplane in a nose-up attitude on the gear puts the wing at a positive angle of attack during the takeoff roll. The lift of the wing offloads the gear significantly before takeoff rotation. The lower gear load reduces the amount of elevator required for rotation. If other features of the configuration such as large CG travel or relatively ineffective elevators make nosewheel liftoff a problem, putting the airplane at a positive angle of attack on the gear can help.

One must be careful not to overdo it, however. An excessively nose-high ground attitude can cause other problems, including nosewheel strikes, porpoising on landing and premature liftoffs on takeoff. 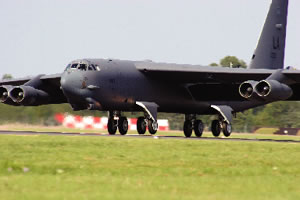 The Boeing B-52s takeoff attitude is nearly flat; the no-rotation concept has worked on some aircraft and not others.

It is possible to set the gear up so that the airplane does not rotate for takeoff. If the airplane sits on the gear in a nose-up attitude that places the wing at the right angle of attack for takeoff, no rotation is needed. When the airspeed reaches liftoff speed, the wing produces enough lift to fly, and the airplane leaves the ground. This no-rotation takeoff concept has been tried on several aircraft. While it can work, it usually proves to be problematic.

The angle of attack during the ground roll is controlled by the contact between the landing gear and the ground. When the airplane unsticks, the aerodynamic controls take over. During a normal takeoff rotation, this transfer of control from wheels to elevators happens gradually, and the pilot instinctively keeps everything in trim. Unfortunately, with a no-rotation takeoff there is nothing to ensure that the elevators will trim the airplane when it leaves the ground. It is possible for the airplane to lift off completely out of trim, and either pitch up or dart back toward the runway.

The Voyager round-the-world airplane was nearly lost in such an incident during testing to determine the effect of rain on the canard. During a test flight with duct tape simulating rain, the airplane lifted off and then nosed back into the runway because the airflow over the elevators was so disrupted that they could not hold the nose up. Several wild bounces ensued before Dick Rutan got the beast reined in. Voyager had vortex generators added to the canard to fix this aerodynamic problem before the world flight.

The crash of the Lockheed Dark Star stealth unmanned vehicle had a similar cause. The airplane lifted its mainwheels first because it was out of trim nose down. A bump in the runway set up a pitching oscillation in the wheelbarrowing airplane. The oscillation diverged, and the airplane pitched up, stalled and crashed. Over a year of modification to the aircraft and to the control system was required before it could conduct a successful second flight.

The transition from wheels to wings can be simple and smooth, but to make this happen the designer must provide the pilot with the right combination of elevator power, maingear placement and ground attitude.