SkyView SE displays are made specifically for VFR aircraft and pilots who want the most intuitive flight and engine instruments on the market. They feature simple and clear displays, with almost no menus to navigate in flight. At the same time, SkyView SE retains modern, innovative Dynon EFIS capabilities like SkyView’s revolutionary COM radio interface and 2-axis autopilot with single-touch controls.

Without mapping capabilities, even the 7″ SkyView SE display has a large, easy-to-read Primary Flight Display, including pilot-selectable six-pack “steam gauges.” With its simplified feature set and installation, SkyView SE is the successor to Dynon’s legacy D100 series products (which remain available). SkyView SE systems configured like their D100 series counterparts are similar in price. SkyView SE displays have the same dimensions and mounting requirements as existing SkyView 7” and 10” displays.

SkyView SE is expected to start shipping in April 2016.

The new AF-5700 display combines the largest-in-class 12.1” screen with a minimized installation footprint. With its new ADVANCED Touch interface, the AF-5700 gives pilots the opportunity to install a large screen EFIS in an instrument panel that previously could not support one. 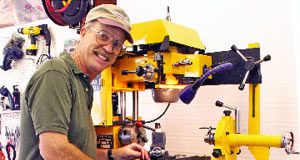 Marc Cook - May 20, 2009
0
Editor-in-Chief Marc Cook takes a moment to put lifes challenges in perspective as Senior Editor Bob Fritz enters the fight of his life with his characteristic positive attitude.