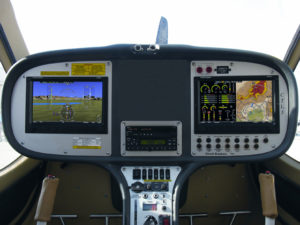 In quick succession, Dynon Avionics has released versions 2.0 and 2.5 of its SkyView software, enhancing the performance of the glass panel flight system. Owners of a SkyView system can download the software free of charge from the Dynon web site.

Included in the two updates are free trial previews of an upcoming optional Navigation Mapping Software feature that allows pilots to navigate “direct to” airports, aviation navaids and airway intersections in the United States and up to100 miles north of the Canadian border. It also provides basic information about airports, runways and navaids in the United States. Later in the year nav data for the rest of the world will become available, Dynon says.

Version 2.0 provides the option of adding a two-axis autopilot for $1500 with mounting kits at $25 to $75 per axis. The autopilot allows heading hold, GPS ground track hold, NAV course following, altitude hold and change with discreet vertical speed control, along with emergency 180 degree turn capability. With the V2.5 software the autopilot functions have been refined for smoother performance and transitions.

As part of the navigation feature set, SkyView will now paint obstacles in the synthetic vision mode and provide runways drawn to scale and with appropriate headings. What the pilot sees on the screen will be the same perspective and relative size that can be seen through the window.

Version 2.0 introduced wind vectors on the PFD screen, indicating direction, magnitude and crosswind component. Version 2.5 adds a new lean mode that can show how many degrees the EGT is above or below peak temperatures for optimal engine operation.

Dave Martin - January 22, 2009
0
Cub look-alikes have been popular for years, and CubCrafters Sport Cub S2 SLSA holds its own against the competition. By Dave Martin.