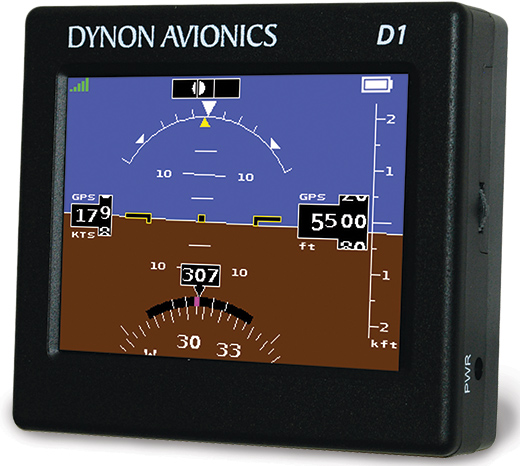 When Dynon was developing its new D1 portable EFIS product, the in-house name for the project was the “Velcro EFIS.” That’s about as apt a description for the D1 as one can imagine, because it’s nothing less than a self-contained mini-EFIS that can be attached to the panel anywhere—yes, even with Velcro—to provide all the attitude and speed data you need to keep the airplane upright.

It’s not conditionally self-contained, either. The D1 has a long-duration internal lithium-ion battery that will run it for at least 4 hours, and though it’s equipped with an external GPS antenna, in tests in two aircraft, we never needed it. The D1 locks on, finds itself in a matter of seconds and is ready to rock.

At $1,425 retail, it’s a better value than an iron gyro applied to the same purpose, and it obviates the need for vacuum or ship’s voltage to run it. While an iron gyro provides only attitude information, the D1 has that, plus speed, altitude, turn and vertical rate, and ground/track heading.

With that capability, there’s no reason it couldn’t replace an iron gyro as the primary attitude instrument in a modest Experimental panel with steam gauges. Given its small size, the D1 is an appealing choice to back up Dynon’s bigger EFIS products, the D100, D180 or the SkyView system, not to mention competing gear from Grand Rapids Technologies or Garmin. 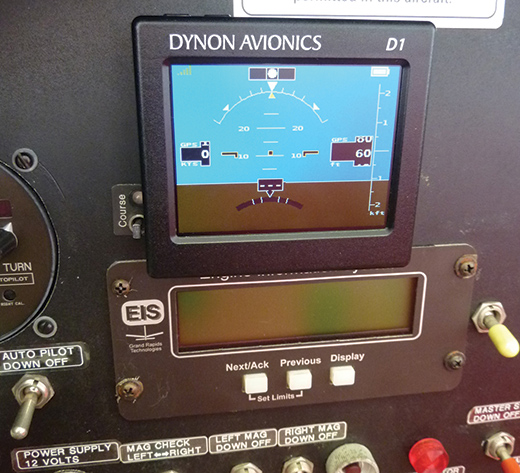 Internally, Dynon called the D1 the “Velcro EFIS.” And here it is Velcroed to the panel of a Van’s RV-6.

Speaking of Garmin, Dynon took a page from the Garmin engineering book in using GPS aiding to improve the D1’s performance. More on that later, but here are the basics: The D1 is enclosed in a 3.5×3.1-inch self-contained bezel that’s about an inch thick. It weighs 7.1 ounces.

The display is the usual backlit LCD that’s become more or less standard for portable gear, with a 2.85×2-inch display size. Pixel resolution is 320×240. The display itself is moderately bright, but its viewing angle is somewhat limited. If you’re sitting directly behind it, you’ll have little trouble seeing it, though it fades a bit in direct sunlight. From about 30˚ off direct viewing—say from the right seat—the display fades to black. Unless it’s mounted closer to the middle of the panel, it won’t be usable by a right-seater or an instructor. For night ops, the D1 can be dimmed.

Control-wise, the D1 is sparse. On the top of the bezel are two buttons: one for power and the other a menu call-up to set units, such as feet or meters, knots or mph. The right side of the bezel has a tiny rocker switch to adjust for pitch and roll errors. The D1 can operate on ship’s power, but it requires a 5-volt input through a 12-volt converter that Dynon provides. There’s a dedicated power jack on the left side, along with a mini-USB port to charge the battery via standard USB voltage. Software revisions come in through an SD card slot.

Dynon provides two mounting options: a cradle that connects to a RAM ball mount and a suction cup, and a clever “pinch mount” that snaps into an empty instrument hole. The latter option is clearly aimed at the certified market to unambiguously lock the D1 into the portable category, thus avoiding any entanglements with the local FSDO.

Either way, the D1 can’t be conveniently flush-mounted and will have to occupy either the suction-cup mount or some kind of surface installation. The power, menu and rocker key would be inaccessible with a flush mount. 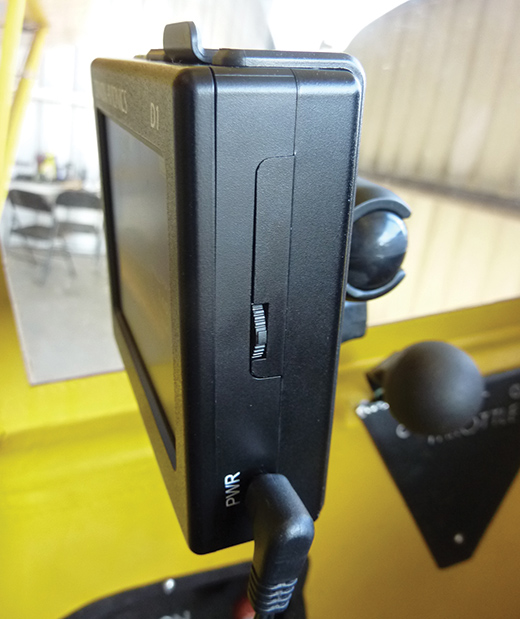 For ground pitch and roll calibration, the D1 has a calibration mode accessed through a side-mounted rocker switch.

Exactly a decade ago, Garmin stunned GPS buyers with a nice software parlor trick: It used only three-dimensional GPS position sensing to render a flight-panel page on a portable GPS. The panel had a horizontal situation indicator (HSI), an airspeed indicator and an altimeter—all based on GPS data. It even had a crude turn indicator that was sufficiently responsive to keep you upright in the clouds. Every Garmin aviation portable since has had this feature.

In the D1, Dynon has advanced Garmin’s game by combining GPS sensing and aiding with the sort of MEMs solid-state gyro package it uses in full-up EFISes. In fact, Schofield said the D1 uses essentially the same MEMs hardware found in the company’s more expensive EFIS products.

Bottom line: The D1 gets its roll, pitch and yaw data from the MEMs, while airspeed, altitude and heading derive from the GPS. That means the D1’s displayed airspeed is ground speed, the altitude is GPS altitude above the spheroid, and heading is GPS ground track.

Schofield explained that GPS speed is also used in the attitude solution. “MEMs tend to be noisy and drifty,” he said, “so we use GPS aiding to help correct that.” Other systems, such as Dynon’s D100, D180 and SkyView, also use GPS aiding, plus air-data information that the D1 obviously doesn’t have. 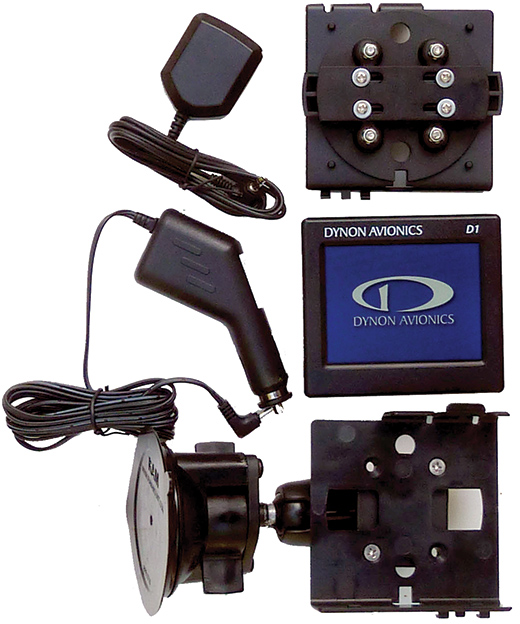 The D1 is shipped with two mounting options: a RAM ball mount and a suction cup or a pinch mount for an empty panel hole. Power and charging cables are also included.

Mount Up and Fly

We tried the D1 on the suction mount in a Piper J-3 Cub and Velcroed to the panel of a Van’s RV-6. Both are taildraggers, so some calibration is required to get the starting pitch indication right. This is done by nudging the D1’s side-mounted rocker switch to correct both observed pitch and roll errors. There’s no way to accurately measure deck angle of a taildragger on the ground, so we found it more practical to zero the D1 in the air, once in level flight. Doing so required very little adjustment.

Dynon says the D1 is capable of accommodating up to 6˚ of roll error and 30˚ of pitch error. It also has a slip/skid ball at the top of the display, so the D1’s lateral or wide axis has to be as close to perpendicular to the airplane’s longitudinal axis as it’s possible to get. This requires an eyeball estimate against a nearby surface, such as the panel or a window; it’s a best guess.

In flight, the Dynon D1 is about as responsive as you might expect. You can easily see minor pitch and roll excursions, and because of display limitations, the D1 lacks the buttery smoothness of a full-up EFIS, but it’s more than adequate to keep the airplane right-side up in the clouds.

Turn rate—a magenta arc that expands from the heading indicator in the direction of the turn—struck us as a little oversensitive, but it’s more of a gimcrack than a must-have feature. The slip/skid ball can also be a little nervous, but even if not well damped, its directionality is accurate. 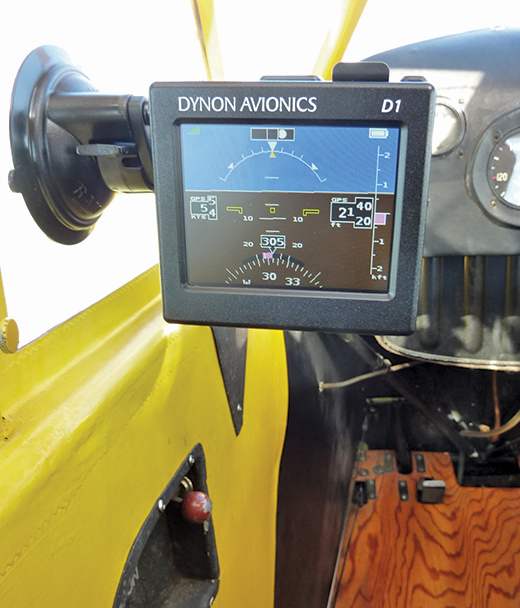 In both a Cub and an RV-6, the Dynon D1 performed well, reliably showing even minor pitch and roll excursions. Speed, altitude and heading are GPS derived.

Overall, the D1 has excellent performance, especially given its price point. Its display is easily visible in the cockpit, it can be readily moved from one aircraft to another, and it utterly lacks any annoying operating quirks. In other words, it’s just what you want in a backup instrument.

Twice the Fun and Half the Cost

Tom Wilson - February 14, 2019
0
Everyone needs two airplanes—one for going places and another for fun. Getting that...

Ed Kolano - December 7, 2010
0
Pilots compensate all the time for aerodynamic effects such as ground effect, often without being conscious of it. By Ed Kolano.