As promised in a prior article, here are some thoughts on how to use that 10-LED-output LM3914 in an aviation environment. Let’s see how we might use it for the intent that Brett Kivell and his Titan Tornado posted to me about a flap indicator, and then expand that to most anything we may want. While they are not intended to compete with multi-thousand-dollar glass displays, they can certainly be used by those of my brethren and sistren who are building their dream ship on a shoestring (or even a small diameter flying wire).

First, how do we make the display? The current vogue in inexpensive, efficient, and bright lighting choice is the ubiquitous light emitting diode (LED), which in current production has far exceeded in-candescent, gas discharge, fluorescent, and other technologies in brightness, simultaneously with power reductions of orders of magnitude (orders of magnitude = x10, x100, and so on).

So, let’s use what they call the “superbright” LEDs to make a display and go from there. Since the introduction of LEDs into everyday equipment back in the mid-1960s, LED chemistry has taken a quantum leap forward with a bit of powdered bat wings and toe of frog to make LEDs rival, and in some cases surpass, incandescent lights in brightness, and certainly far surpass incandescents in size and efficiency.

The most common, and nearly the least expensive (see later) LED is currently in the 3-millimeter (.118-inch diameter) package. That is, a 3-millimeter LED will fit exactly (friction fit) into a 0.118-inch hole, which happens to be a 3-millimeter drill or #32 (0.116 inch) package with a press fit of 2 mils. And, for belt and suspenders, you can hot-glue the LED to the back of a piece of aluminum cut into a 2-inch instrument hole plate.

“But Jim, steam-gauge holes are wasteful of panel space and pretty anachronistic.”

OK, but you old geezers making airplanes better get out your magnifying glasses or magnifying headsets. LEDs are available in packages so small you can’t believe it.

The smallest I’ve ever been able to handle, even with a double magnifier on my headset, is what is called an 0805, which is 80 mils by 50 mils (0.08 inch x 0.05 inch), or about the size of a grain of rice. You can make some darn small indicators for your inexpensive airplane. (For you metric-heads, this is 2.0 millimeters x 1.2 millimeter.) 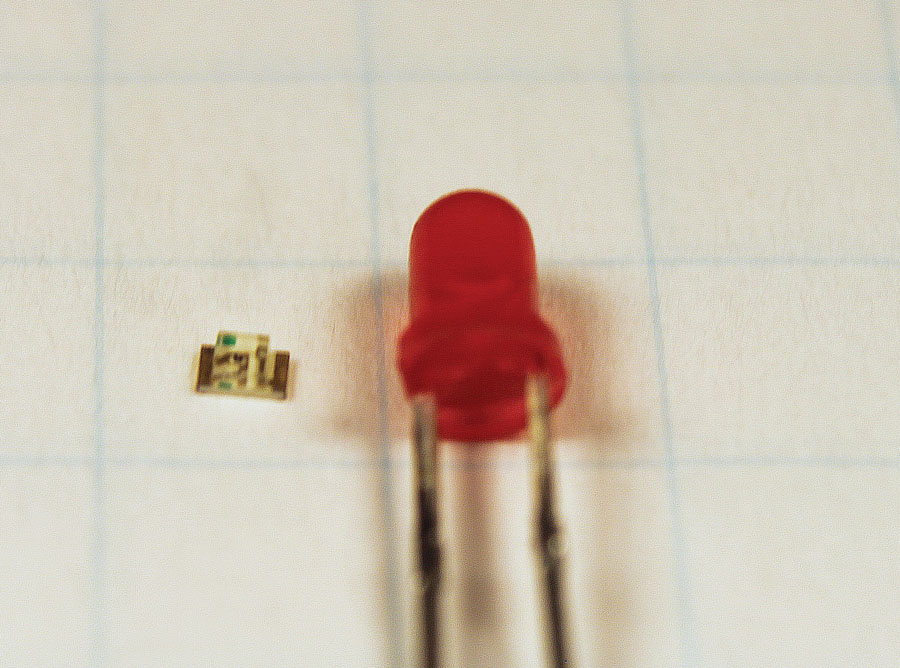 The microscopic 0805 SMD LED is on the left. The tiny 3-millimeter red LED is on the right. The engineering paper has 1/4-inch squares.

Small LEDs like this are about half the price of the 3-millimeter versions. Just the chip, a small amount of substrate, no package, no wires, and that’s the comparison. The red 3-millimeter LED you see in the photo is about a dime, and the red SMD diode is about a nickel.

But bright? Yep, very bright. You can’t imagine how bright an LED is inside the package that has just the LED chip itself without any packaging around it.

Now, there may be those of you who want to use the old 5-millimeter LEDS because (a) you have a bucket of them around and (b) they are really cheap these days.

Do that if you wish, but I counsel against it. The old LEDs in that package are totally inefficient, really ancient technology, and won’t be around much longer.

The three left drawings use 3-millimeter LEDs. The gauges fit in a standard 2-inch hole. The smaller rectangular drawings use the 0805 surface mount parts, with fuel on the left and flaps on the right.

Now, let’s talk about little tiny SMD (Surface Mount Device) LEDs in the 0805 package (which I suspect most of you will want to use). They are less than a tenth of the size of the prior 3-millimeter package.

Perhaps in the future we will be given LED dice, which will mean we’ll need microscopes to put our panels together. But for now the SMD LED is as small as we can get.

But bright. There is practically no plastic package between you and the diode, so all the light from the LED is available. They are very much daylight bright and need some dimming at night (a future article).

I think it is pretty obvious from the displays shown that you can have a legacy 3-millimeter display in a 2-inch instrument hole or the latest/greatest surface mount display, whichever you feel comfortable with.

If you choose the surface mount, you can make the display a half inch by an inch and a half…a bit smaller if you want push to come to shove and do some really tight soldering.

Now, you see the surface mount display is an inch by an inch and a half on the top. There is a version of the LM3914 (the IC we chose last month) in a surface mount package about a quarter inch square, so that will fit nicely on the back of any PC board mounting we may wish to do.

That leaves us just enough room on the back of the display to place a surface-mount LM324, plus a couple of the other goodies for scaling almost everything you can give to the 0-5 volts we calculate that is needed to run the LM3914 properly.

This template shows the dimensions for a standard 2-inch instrument hole.
It is available online as a PDF file.

The only caveat is that you can’t mount these little rascals in a hot air blast. At the 10 milliamperes that the LM3914 puts out, we can get into some pretty warm air (70 C/158 F), but if you run the absolute limit of 30 mA to it, you can’t let it get hotter than a fairly warm 25 C (77 F) room temperature.

A full dual gauge in an inch and a half by half an inch for any two things you want to measure—if that’s not the ultimate Jim’s two-fer, I don’t know what is.

Next month: Anything you have to measure converted to 0-5 volts the easy way. And maybe we can work in an alarm for when these indicators turn red. Until then, stay tuned…