I read an interesting story not long ago, a story from a professional pilot who was troubled about a flight he had made recently in his personal homebuilt aircraft. Nothing went wrong-he took off in good weather, cruised in smooth air, and landed without incident under VFR conditions at his destination. There were no airplane issues, but for a portion of the flight, he was on top of a solid overcast with below-IFR weather underneath the clouds and convective activity building up behind him. What he realized was that, although everything was fine, if he had experienced an engine problem, he simply had nowhere to go-no good options. He had no out-and that is what bothered him. 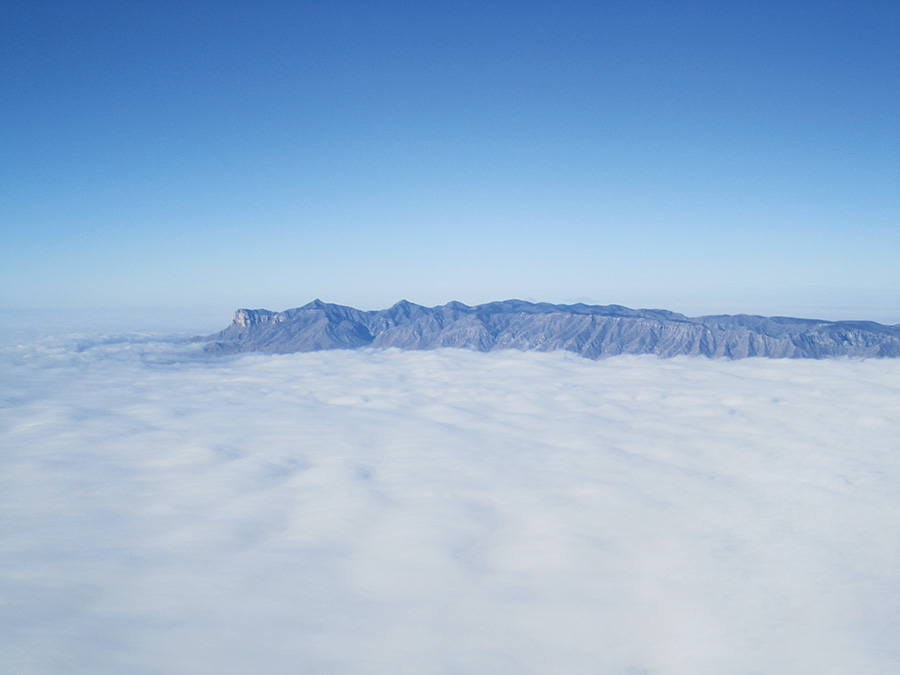 You can see the rocks sticking out of the overcast-so wondering what is below the clouds might raise the hairs on the back of your neck.

Leaving ourselves an out for the unexpected is a great way to preserve our peace of mind-and keep the factor of safety high. Keeping those factors of safety-the ace in the hole, so to speak-is one thing that separates the professionals from the amateurs. Professionalism is not a matter of getting paid for doing something-it is an attitude that you bring to the activity, a way of thinking and preparing to do something difficult. Some of the most professional pilots I have ever known have no more than a private license, have never been paid a penny for flying, and have been doing it for four or five decades. I expect they will die peacefully in bed after many thousands of hours of joyful flight-because they have always left themselves an out in the air.

A frequent topic of discussion in hangar flying sessions (for real and on the Internet) is the “impossible turn”-trying to get back to the runway after an engine failure on takeoff. While many like to argue the technicalities of minimum altitudes, bank angles, and G-loadings to use to do this successfully (and yes, it can be done successfully under the right conditions), the fact remains that a large number of pilots (a majority, in fact) who have tried it in over a century of flight have screwed it up. And when you screw it up, you die. You don’t get injured-you die. The many that have followed the credo of landing more or less straight ahead have walked away with non-life-threatening injuries. You can make that choice for yourself.

I bring it up not to discuss the merits of the impossible turn itself, but rather to discuss one small aspect as it relates to leaving yourself an out. Many, when talking about the turn, will say, “But at my airport, there is no place to go off the end of the runway if I have an engine failure!” They like to point out a solid city block of houses, a school, a weapons storage facility, a refinery-or a swamp full of alligators. OK, I’ve got that. So maybe the answer isn’t to accept the very poor odds of the turn-back; maybe it’s deciding that using that runway, at that airport, leaves you no out-no place to go. Maybe you have to ask yourself if using that runway is worth the risk, or if you should find a better airport.

There’s no doubt that I have used runways where I left myself no out. Most experienced pilots have done so-and then it becomes a risk/reward trade-off. Is the risk worth the reward? Is the beauty of flying into that remote mountain strip, with no way to go around, going to be worth the risk? And can we minimize that risk by ensuring that our engine is in top-notch shape, we aren’t running it at the hairy edge of what it can do, and that we don’t have any doubts about its ability to keep running? Yes, I have put myself in positions where I had no good options-but I put the odds of not needing an option on my side by a fairly large number.

The next time those hairs start to rise on the back of your neck, ask yourself if the risk you are flying into is worth the reward, and if there is anything you can do to reduce that risk. That VFR flight over IFR conditions? Well, how about making sure you have an IFR-equipped airplane and a qualified (and current) instrument pilot onboard. Modern EFIS equipment, with synthetic vision and approach capability, has proven itself in several incidents involving engine failures in recent years. Knowing that you are not going to run into a mountainside or canyon wall while descending into the only good landing field in the area is a big help.

You can design such capability into your Experimental aircraft quite easily these days. Just throw some money at the problem and the airplane may be far more capable than the pilot. The thing that money can’t buy, however, is the good judgment to keep yourself out of a place with no good option.

This month we welcome a new repeating feature in KITPLANES Magazine. In Stressing Structure, engineer David Paule, currently slaving away on a slow-build RV-3, will help us understand what goes into the design of aircraft structure. This is important to everyone in the Experimental community. If you are planning on a clean-sheet design, the methods and techniques that Dave shares will help to ensure adequate margins in your aircraft project. For those building from kits or plans, these articles will help you understand load paths and which elements of your aircraft might be the most critical. For those contemplating modifications to existing designs or kits, these methods might just give you the tools you need to ensure that you maintain adequate margins and understand the existing structure before making changes.

As a young, aspiring aeronautical engineer, I learned that “aircraft design” class does a great job of determining the outside shape, the weights, and the performance of a new design. What it didn’t do was give us a clear understanding of just how to build a wing rib, or a spar attach bracket. These structural aspects were left to be learned when the engineer actually joined a company and learned how airplanes were really built. In the homebuilding world, we need specific tools and understanding that even young engineers don’t get in school-and Dave will share some of those in this series. We hope that builders and potential designers find this useful, and at the very least, it will provide us all with a better appreciation of the design process that goes into keeping the wings and tail firmly attached to the rest of the airframe.