As a lifelong student of aviation, I have spent a great deal of time studying the causes of aircraft accidents—mostly by reading accounts of aircraft accidents. As a pilot for over four decades, I have developed a healthy respect for things that can cause a flight to end badly. And I have, like most pilots, cultivated a healthy set of fears for “bad things that can happen to me and my airplane.” Maintaining a healthy respect for things that can kill you is, I think, a reasonably good way to help yourself live to a ripe old age and die in bed. Yet many pilots and builders of homebuilt aircraft spend a great deal more time looking at things that, while potentially fatal, are far less likely to happen than things they overlook or simply ignore. Addressing the actual causes of accidents, rather than the imagined things that materialize in our fears, is a far, far more productive way to address risk management.

Let’s look at an example. Aviation magazines for the past 40 or 50 years have been chock full of stories of pilots’ bad encounters with the vagaries of the atmosphere. Whether it is a VFR pilot stumbling into IFR conditions, an IFR pilot running into severe convection, or a terrible encounter with ice, weather has always been a staple fear of the light airplane pilot. Many of our brethren have met their fate while tumbling out of control to the ground, with or without their wings. To be sure, I can’t think of any single topic more thoroughly drummed into my head than avoiding bad weather while VFR, and avoiding even worse weather while IFR—especially in a light single with limited capability to handle the worst the atmosphere can throw at us. 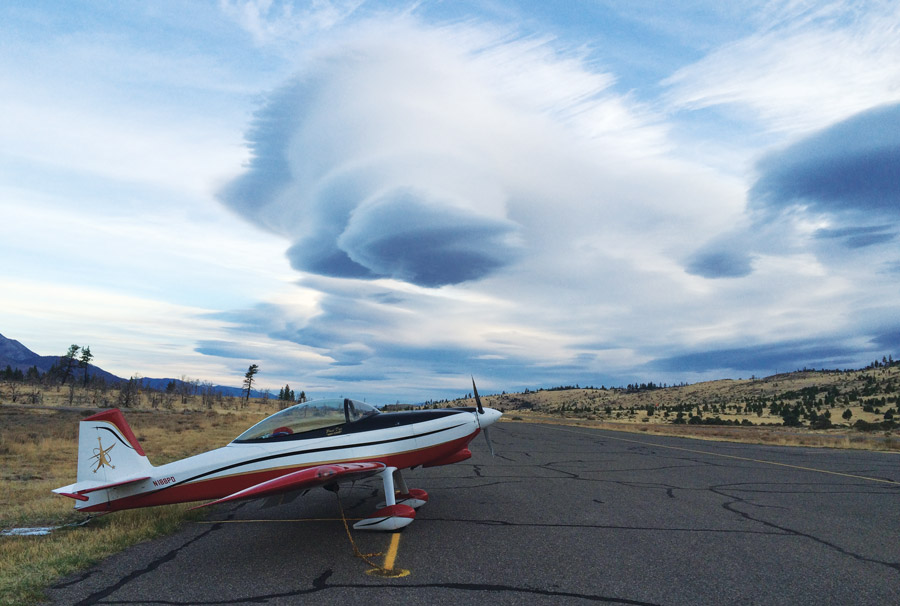 Lenticular clouds are often an indicator of strong turbulence and downdrafts that could lead to loss of control or controlled flight into terrain.

But now let’s take a look at today—recent history as applied to Experimental aircraft in the real world. Our fear tells us that many people are killed stumbling into weather for which they are not prepared, or the airplane is not suited. Yet…if you look at the actual accident statistics, a very small percentage of the fatal accidents in the homebuilt world are actually weather related these days. The reason? Well, I am sure that is debatable, but it is probably a combination of the enhanced weather information available in the cockpit, the vastly superior avionics available to the average homebuilder today, and (of course) that fear instilled in us since our birth as baby aviators about flying in weather that can swat us like a bug. Pilots should take precautions against getting themselves killed by weather, but they probably shouldn’t worry about it as much as they do—because they have many other things to worry about.

What things? Well, the single biggest cause of fatal accidents has recently been defined as the “loss of control” accident. The FAA usually has a “hot button,” the current problem that they really want to solve. In the past, it has been weather, then it was CFIT—Controlled Flight Into Terrain. There is something to be said for an agency like the FAA having hot buttons and then directing a lot of effort into solving those problems. If they put enough energy into these things, they get results! For instance, CFIT has been reduced to the occasional anomaly by moving maps, GPS, and synthetic vision. Today’s effort is to stop LOC—and those Loss Of Control incidents are a tough nut to crack, mostly because they don’t have a single root cause. Some are just poor piloting; others are due to poor judgment—aerobatics close to the ground or buzzing, leading to a stall/spin on the pull-up. However you get into it though, losing control of the airplane often means a fatal return to earth—and this is something pilots really should be worried about. The statistics don’t lie; we can make great inroads into the accident numbers if we can solve the problem. Incidentally, the EAA is currently running a contest soliciting ideas to reduce LOC accidents, and the prize money is pretty good!

The good news, of course, is that the vast majority of aviation mishaps aren’t fatal. And that’s good, because there are mishaps every single day caused by pilots running off runways and collapsing the landing gear—or sometimes those two things happening in the other order. This suggests that if pilots really want to cut down on accidents, they shouldn’t be only worried about weather, or structural failure, or even how many redundant EFIS displays they have—they should really work at keeping directional control during takeoff and landing. Well, that and keeping the wing from stalling when they are well off the ground.

Learning what we should really be afraid of is simple—just read the daily mishap reports from the FAA, and every once in a while, spend some time reading a few NTSB reports—especially for aircraft of the type that you fly. The NTSB reports go into great detail into the why of accidents—not just how many occurred. And knowing the why, you can hopefully find a way to stay out of the same situation. You see, understanding what percentages of accidents are occurring in each category is useful and can help you understand where to put your emphasis when it comes to safety. That is valuable. But understanding the precise reasons that pilots get themselves and their airplanes into bad spots—that is worth its weight in gold. A little fear is good and healthy—so long as we fear the right things.

Vic Syracuse - August 21, 2014
0
I promised I would cover condition inspections in a future article, and having just...