If any of you out there can remember that line from Chuck Berry’s classic “School Days” record released in 1957 (yes, I got a copy for my eighth-grade graduation present), then you are way too old to be fooling around with cell phones.

Be that as it may, one reader wrote awhile ago asking if you could use a cell phone in your hangar to turn on an electrical device. Well, it makes not a bit of difference to this circuit what you want to control—coffee maker, engine warmer, electric toothbrush—just how you do it.

Fortunately, I have the luxury of time to contemplate exactly how such a device might work. In the engineering world, that is not always the case. The boss comes in on Monday morning with an idea, and you had better have a working prototype by Friday afternoon. This one came in late last summer, and I contemplated it all winter.

The original request was for something that you could “touch-tone” on. That proved to be extremely difficult. Not so much because of decoding the touch-tones (there are a dozen chips on the market to decode the DTMF tones), but because of a more fundamental question: How do you make a cell phone answer itself? The answer is that you can’t—at least not without getting into the innards of the phone.

The cell phone assembly mated to the electronic circuitry shown on the schematic. Two sections of the op-amp are now unused, but they will be part of next month’s signal conditioning.

Another question raised its little noggin. There are almost as many varieties of cell phones as there are models of homebuilt aircraft, and each has its own set of variants and options. What I needed was a trait that almost all cell phones on the market share. What I finally came up with was that all of the cell phones I looked at had some sort of ringtone that simulated an older telephone: ring, quiet, ring, quiet, ring. 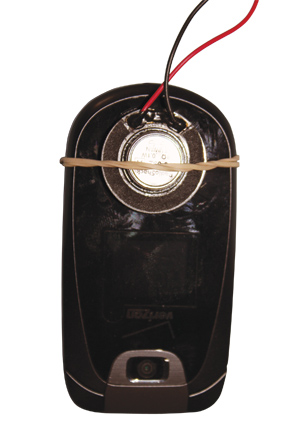 The speaker rubber-banded directly over the ringer on the cell phone. You may have to scooch the speaker around a bit to maximize the ring-tone output voltage from the speaker.

Now I had something to work with. One other self-imposed constraint was that I wouldn’t modify the cell phone in any way. The one I used to prove the design was the wonderful Apple iPhone 4S, and it transforms from a hangar device to a pocket phone with the simple removal of a single rubber band. However, just to prove that it doesn’t take a $400 cell phone, all the rest of the tests were completed using a $15 phone.

All the searches for a simple microphone to convert those ringtones to an electrical signal that you could get from Uncle Joe’s Used Cyclotron Emporium in East Undershirt, Ohio, on a Sunday afternoon were for naught. Yes, I found a few from some of the online surplus marts, but the odds of their having stock five years from now, when you get around to actually building this project, were about the same as your winning an argument with an FAA inspector or your significant other: slim to none.

One thought was to use the microphone from a busted headset, but again, the odds of your having the same busted headset that I used are about as good as in the paragraph above. 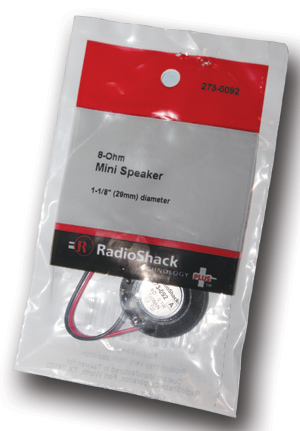 The little speaker, still sealed inside its packaging.

Looking around at the various options, one thought kept popping into my head: What sort of transducer is ubiquitous and doesn’t really require any particular part or vendor to acquire? I put the thought on the back shelf and went back to preparing the lesson plan for my class. This is the class where I show students what their voice looks like on an oscilloscope by using an old speaker as a microphone. Bingo. Problem solved. Even The Shack carries little speakers, as do Mouser and Digi-Key and almost every electronic store in the country. The nice thing is that as long as it fits onto the cell phone, it doesn’t matter what size it is or whether its internal impedance is the old standard 4 ohm, the current standard 8 ohm, the common 32-ohm low-cost telephone speaker or the 300-ohm speaker from a broken aircraft headset.

Now we can begin the experiment to see just what we will need to make the tiny (millivolt) signal from the speaker into something we can use to trip a digital logic chip to count “ring pulses.” That’s right, I’m going to make it so that if you call your cell phone in the hangar, it will turn on your heater when it gets to the eighth ring. Why eight? Eight happens to be a convenient number, being two to the 3rd power (23), which is a dandy number in the digital world.

A quick look with the speaker locked in place onto the cell phone ringer with the special latex retaining band (available at your favorite office-supply store at 10 for a penny and two Cessna box tops) produces a peak-to-peak voltage of about 10 millivolts. All we need to do now is amplify that millivolt signal to a level compatible with the digital stuff we are going to employ in next month’s article (this is chapter one of three, where we ultimately build this little rascal).

Just a few words about the schematic diagram. The power supply is bonehead simple: a single 78L05 regulator chip with a 5-volt zener in the common line to give 10 volts output for any input voltage from 12 to 24 volts. I’d suggest a small wall-wart 12-volt DC power supply that shouldn’t cost more than $5 or so; C2 is necessary only if the DC power supply is really dirty (noisy) on the output. If it is necessary to clean up a dirty power supply, I’d suggest values between 1000 and 5000 microfarads.

The op-amp (my favorite, the old LM324) is connected as a simple two-stage voltage amplifier. The two stages are nearly identical; the only difference is the inclusion of a level-set control (R10) between the stages. Both have a calculated gain of 100, so the output of U1A should be about 1 volt peak to peak; R10 sets the output of U1B to be 10 volts peak to peak, or just about “flat-topping” at both the top and bottom on the voltage peaks. We will use this voltage next month to trigger the digital circuitry.

Please note that to properly adjust and prove this project, you should have access to an oscilloscope. Trying to do it with a simple multimeter will not work well. Until next month, stay tuned.

Build It Better: Hope Is Not a Plan

Paul Dye - February 18, 2013
0
There are always unknowns in any human endeavor, but in aviation, we must think about the ways we can minimize them.