Our RV-3 is powered by a custom-assembled IO-320 engine with a constant-speed prop. Built by the old (now closed) Mattituck facility on Long Island, it is equipped with dual P-Mags and a Bendix-style fuel injection system. From the very first start, this has been the smoothest engine I have ever flown behind. When you lean it out and go past peak, the EGTs drop, and you can feel the sag in power—but all the cylinders keep firing, and there is no missing or roughness. Keep leaning it back and power keeps dropping off, but it stays smooth—right up until you get so lean, it just quits firing. Push the mixture back in, and it refires without a hiccup.

That’s how it has been for over 500 hours of trouble-free flight. But recently, I was climbing out for a short local flight, leaned it back until I felt the sag, and there was a little miss. It was still far smoother than our carbureted airplanes under the same conditions, but there was just this little hesitation that hadn’t been there before. A quick glance at the EGTs didn’t help me much; the bar graph displays simply didn’t have enough instantaneous resolution to show me which cylinder might be misbehaving.

I richened it up until it was back over peak, then leaned again, this time, watching the EFIS do its leaning thing. I discovered that the engine was still smooth at 50 degrees LOP—it was just getting rough when I went beyond that. It was perfectly acceptable, but not like it had always been. 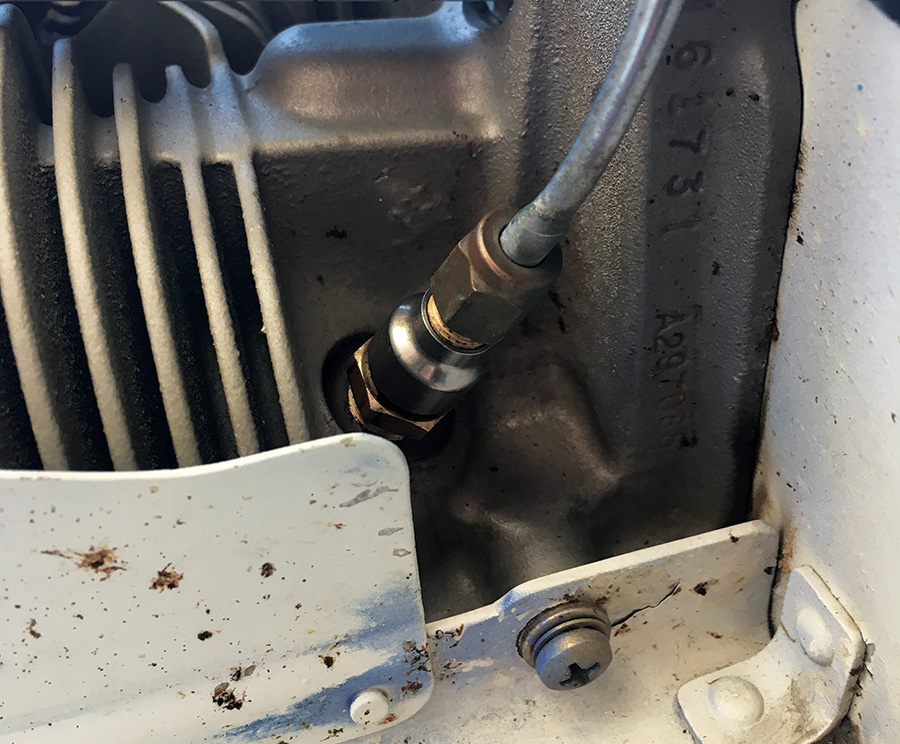 Running a little rough? Sure, it could be a clogged injector— but don’t forget to think of other potential causes because the first answer is almost always wrong. (Photo: Paul Dye)

So what was the problem? My thoughts immediately turned to that which I have the least experience with: the fuel injection. Hmm…500+ hours without any maintenance; I bet I have some crud in an injector! Sure, that must be it. Finally, a chance to play with injectors! I opened up the maintenance book, got out the tools, and spent an enjoyable couple of hours removing and cleaning the precise little injectors. It gave me an excuse to buy a sonic cleaner—how can you beat that! With everything reassembled and the airplane buttoned back up, I took it back into the air to find…exactly the same behavior. Rats, that wasn’t it.

This isn’t a story about troubleshooting the engine (the rest of the story is that with a careful mag check, I pinpointed the problem to the right side ignition, meaning it couldn’t have been fuel related). It’s about an old axiom I learned in my spaceflight days: “The first answer is always wrong!”

You can’t imagine just how often this proves to be true in the world of troubleshooting. We see or hear a symptom and immediately come up with an answer. It is usually a simple answer, based on our experience or what we learned in a book. And it is almost always wrong. We get there too quickly, we don’t have all the information, or we simply haven’t given our minds the chance to look at all the possibilities. We jump to a conclusion, and that’s rarely a good thing.

Not waiting to gather information before making a decision or drawing a conclusion seems to be the human thing to do. Everyone I know reacts the same way. It is very, very hard to distance ourselves from the need to immediately have an answer and get working on a solution before we really need to do so. In my old job, we always told people that when you have a problem, the very first thing to determine is how long you have to solve it—not to come up with a solution. Start the clock on your solution, then collect the potential causes for the problem. Sort through the potentials and come up with the right answer before your deadline expires.

As a flight director, running a large team of controllers on a space mission, I told folks that if they saw a problem, they should tell me about it immediately, then tell me how long they needed to solve it—and when it needed to be solved. If they did this, I’d leave them alone to come up with an answer, so long as things didn’t look to be getting worse, or were going to go south before their deadline. That way, they could work the problem without the distraction of the boss breathing down their neck. I’d rather have the right answer, on time, than a guess (that could be wrong) right away. I believe the old phrase was, “Let’s not make things worse by guessing!”

The same thing should be true when flying or troubleshooting our airplanes in the shop—or even when we’re building. In the air, if you’re not on fire, pieces aren’t coming off, or you aren’t about to hit something, take the time to really analyze your problem, see what the possible causes might be, then sort through them. In the shop, if you’re scratching your head about a problem with the engine, remember the old saying: “Fuel, air, spark, and compression; you need them all, and the engine will run.” Go through them one at a time, and see where the problem might be before charging off in one direction—that could be wrong.

If you’re building an airplane and run into a problem driving rivets, it is certainly a possibility that the rivets were improperly heat treated, which might make them hard to set. However, it is more likely that you turned down the air pressure on your compressor to do something else and forgot to turn it back up when you went to use your squeezer. The nice thing about being in the shop is that there are rarely any time constraints—you can just stop and figure things out in a logical fashion.

When I was training young flight controllers, and they were going to give me an answer to a problem they had encountered, I always asked them for at least one alternative to the answer they were going to give me. It might be a stupid alternative, but at least it was an alternative. This was to force them to consider at least one other answer (and hopefully more) to get them thinking outside of whatever box they might have artificially put themselves in. It’s a good way to build and fly airplanes as well. There are always alternatives—although not always good ones. But until you think through several, you can’t possibly argue that what you came up with is the best.