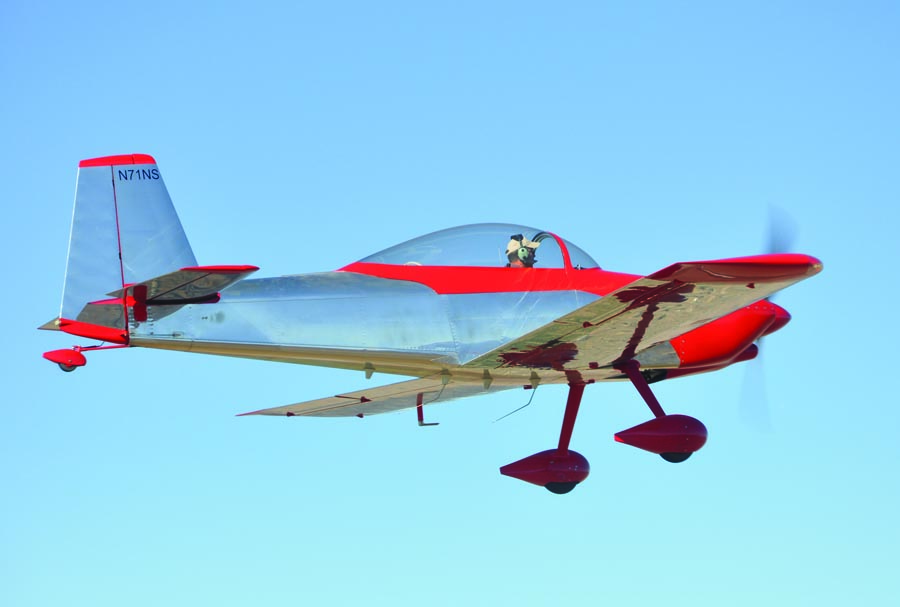 The tests in this article were prompted by several events. Last summer at Oshkosh, I was chatting with Paul Dye about the effects of aerodynamic fairings. Not long after this, I was impressed by the incremental gains that Dave Anders achieved in his RV-4 and wrote about in KITPLANES (see “Putting the Experiment in Experimental,” March 2017 and “So You’d Like to Go Faster,” September and October 2017).

But really, it goes back to an embarrassing moment early in my Phase I testing. Misjudging the length of the RV-8 as I swung it around for a runup, I dropped the tailwheel off the edge of the asphalt, damaging the tailwheel fairing. With seemingly more important things to do, the broken fairing sat under the workbench for a couple of years. Dismayed by the cost of more horsepower, it seemed like a good time to quantify the effects of drag reduction. So a little epoxy and paint later, the tailwheel fairing was ready for testing. 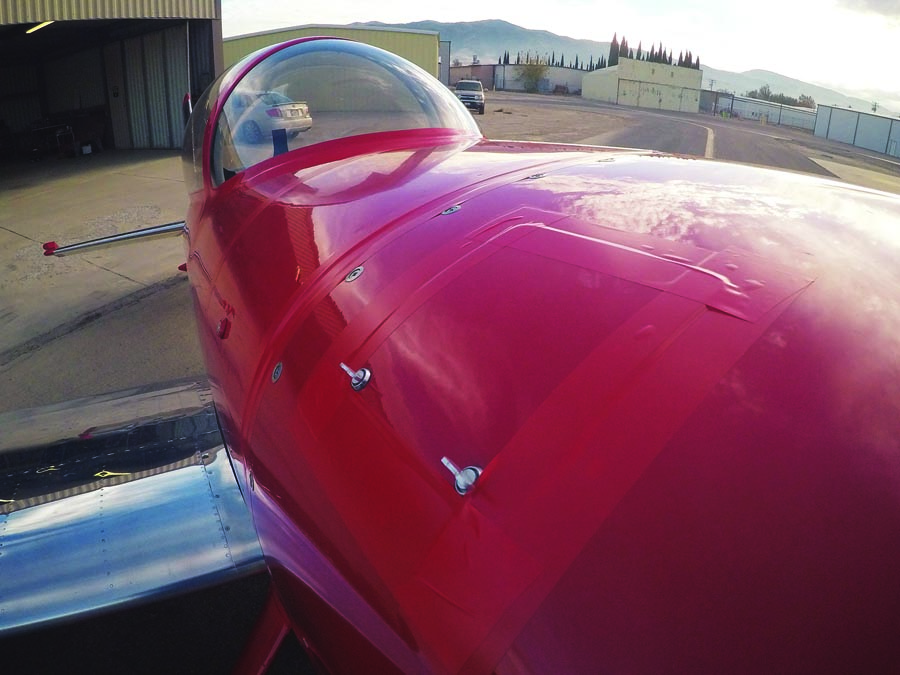 For these tests, I flew a series of sorties in different configurations that I hoped would reduce drag. Each flight was conducted at 10,000 feet pressure altitude. Outside air temperature (OAT) at this altitude only varied slightly from +37°F to +41°F (+3°C to +5°C) across all the flights. I started each flight with 30 gallons of fuel, which resulted in a takeoff weight of 1540 pounds and a CG of 79.7 inches (forward). Each flight lasted around half an hour and used approximately five gallons of fuel. Every test point was conducted with wide-open throttle and 2500 rpm. I began each configuration test with mixture full rich, then leaned in approximately one-gallon-per-hour increments until the onset of engine roughness (~75°F LOP). 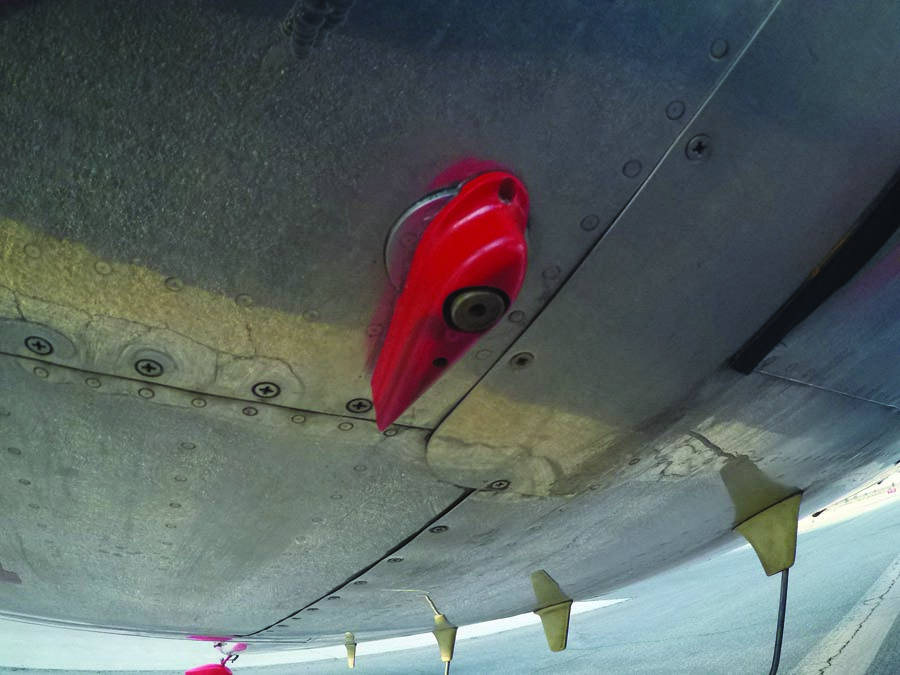 Fuel drain fairings didn’t improve top speed, but they did improve the aesthetics.

I began the experiment by taking off the wheelpants, gear-leg-to-fuselage intersection fairings, and fuel drain fairings to achieve a practical minimum fairing configuration on my RV-8. From there I added the wheelpants and gear-leg-to-fuselage fairings, which is probably how most folks fly their RVs. My aircraft has the Grove airfoil-section landing gear, so the gear leg fairings are just between the top of the gear legs and the fuselage. Next, I added Van’s tailwheel fairing. Fuel drain and fuel vent fairings from JD Air came next.

I purchased some 38-millimeter Mylar gap seal tape (stock number 4441) from Wings & Wheels and added it to both sides of the elevator and rudder gaps. The gap seal tape was attached with the recommended 16-millimeter double-sided tape (stock number 4489) and then the leading edge of the tape was covered with 19-millimeter PVC Safety tape (stock number 4396). In addition, I taped over the bottom surface of the flap hinge. Last of all, I expended a 36-yard roll of 2-inch-wide 3M red 471 vinyl tape. Axel Alvarez (energetic RV-4 pilot & Reno Racer #87) provided tips and photos of what to tape up. I started with the intersections between all fairings and the aircraft structure. Also taped over were the two NACA air inlets for cabin ventilation. The wing tiedown bolt holes were covered. The ends of the ailerons, outboard ends of the flaps, and the ends of the elevators were taped over to make them flush. On an RV-8, the ends of these control surfaces are concave where the outboard rib is attached. The rest of the roll went on the seam between the upper and lower cowl, dipstick access door, and baggage bay door perimeters. 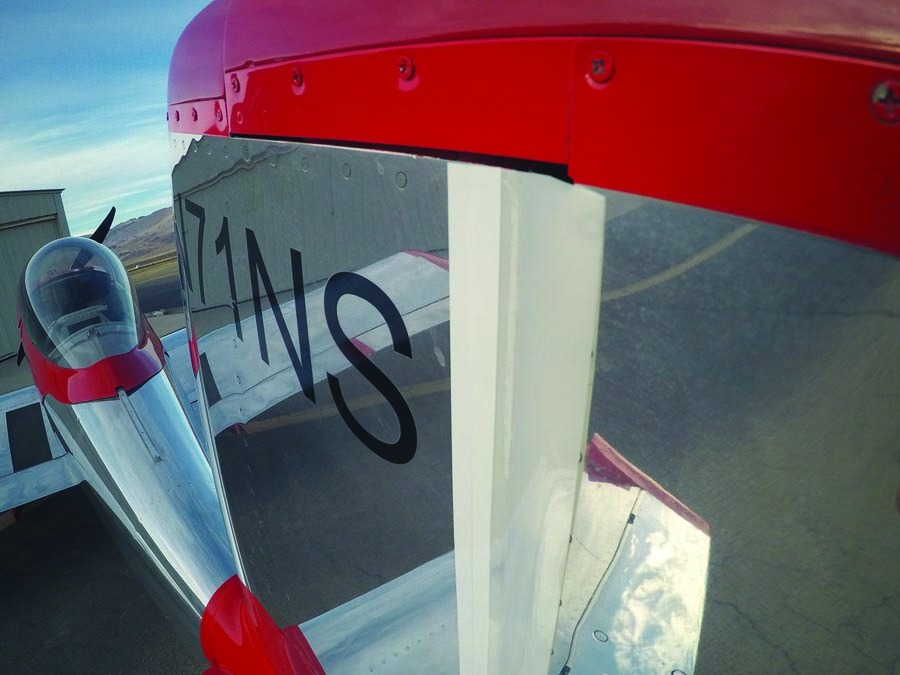 Flight #1: With all the fairings off, I was able to get a baseline that I could compare future results to. At the best power mixture, the plane maxed out at 177 knots TAS.

Flight #2: The addition of wheelpants and the landing gear to fuselage intersections fairings resulted in a big jump in top speed, up to 187 knots TAS, an improvement of 10 knots. On an RV, the speed gain with wheel fairings is pretty compelling, although I don’t remember the job as being much fun during construction. 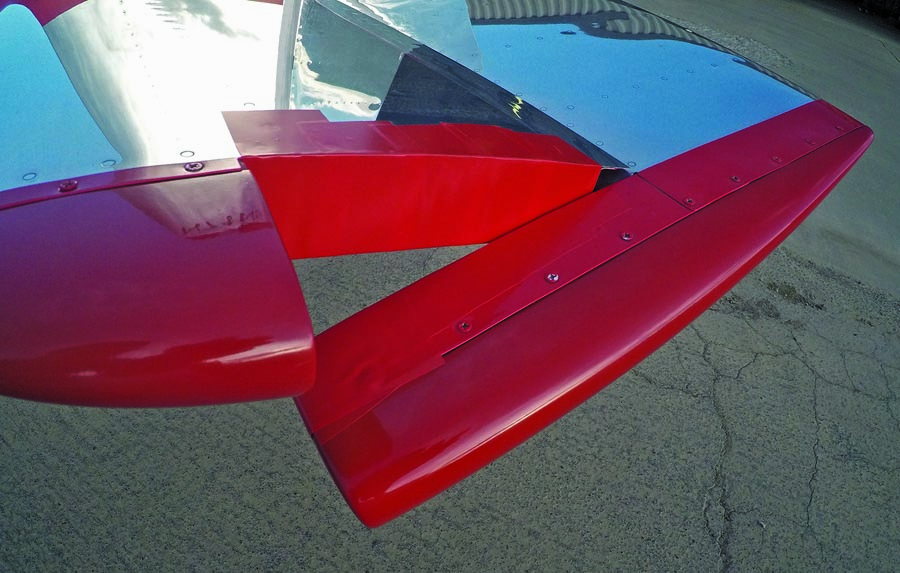 Concave ends of the horizontal stabilizer and elevators were sealed with vinyl tape. A better approach might be to seal these areas with small fairings during construction.

Flight #3: By replacing the repaired tailwheel fairing, top speed edged up just a little to 188 knots TAS, a small increase of only 1 knot. Given the relatively low cost, light weight, and better aesthetics, I think the tailwheel fairing is worth the effort. 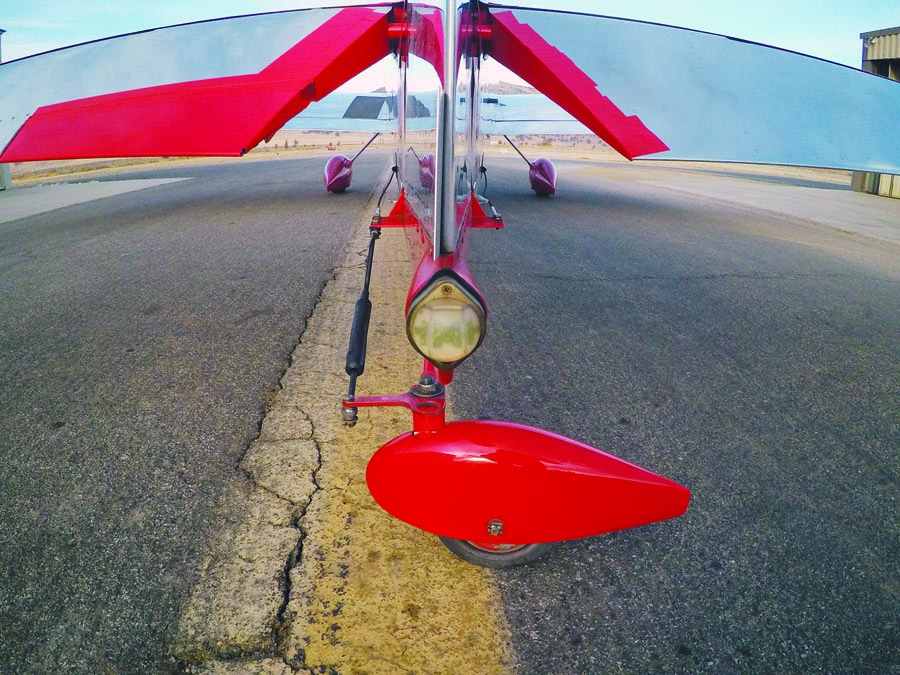 Flight #4: The addition of fuel drain and fuel vent fairings did not make a measurable change to the top speed. They certainly add a nice finished look to the plane though, so they will stay. 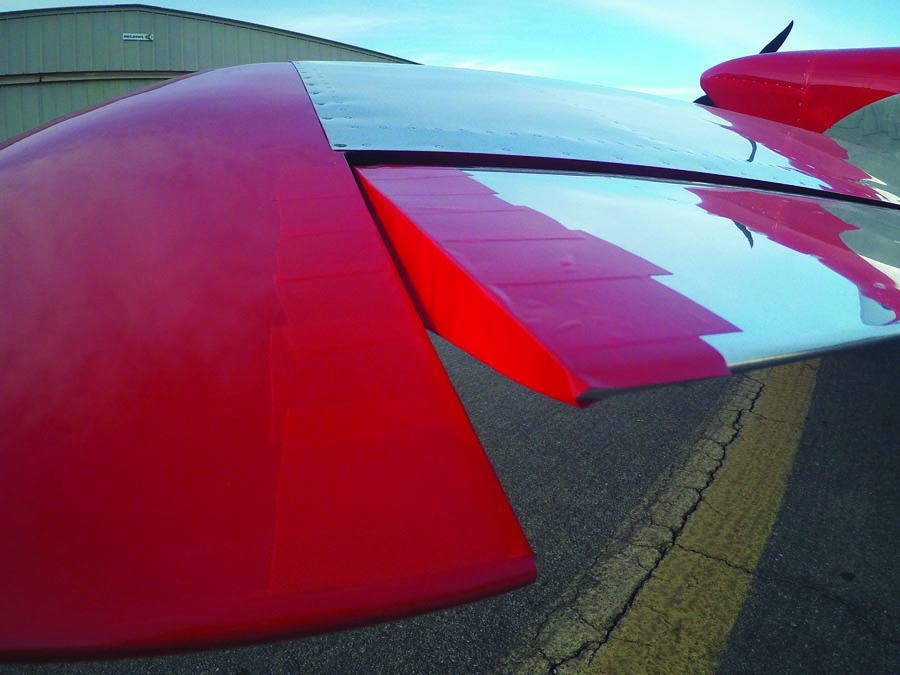 Red vinyl tape applied to the outboard end of the aileron and the wingtip.

Flight #5: The flight with glider gap-seal tape on the rudder and elevator was a bust. As the plane accelerated through 180 knots TAS, there was a slight buzzing for a couple of seconds, then it was gone. Luckily I prepared for this eventuality by writing “Property of USAF” on each piece. So even if glider gap-seal tape has the potential to reduce drag, it was not able to stay attached long enough to be useful. Perhaps on a lower-speed aircraft it would be worth a try. I was a little disappointed as modern high-performance gliders have relatively high VNE speeds. 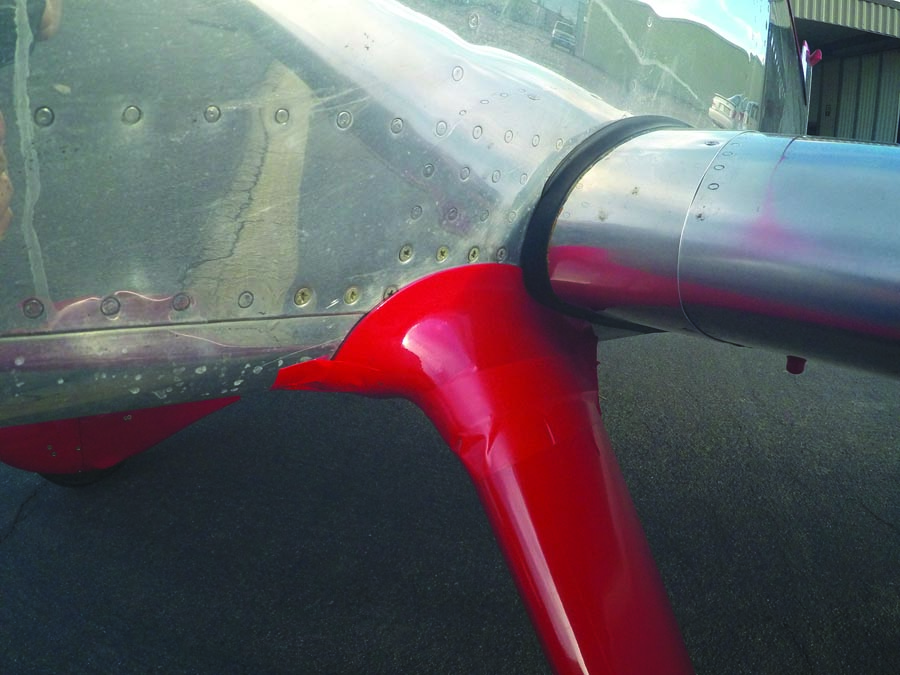 Flight #6: The roll of vinyl tape increased the top speed up to a maximum of 189 knots TAS, a further 1-knot increase. Not bad for just $29.36 on Amazon.com and an hour to slap it on. I can see why racers use it, but it is not really a good look or that practical for more than a couple of flights. I think if I were still building, making small fairings to cover the concave ends of the control surfaces would be worthwhile. 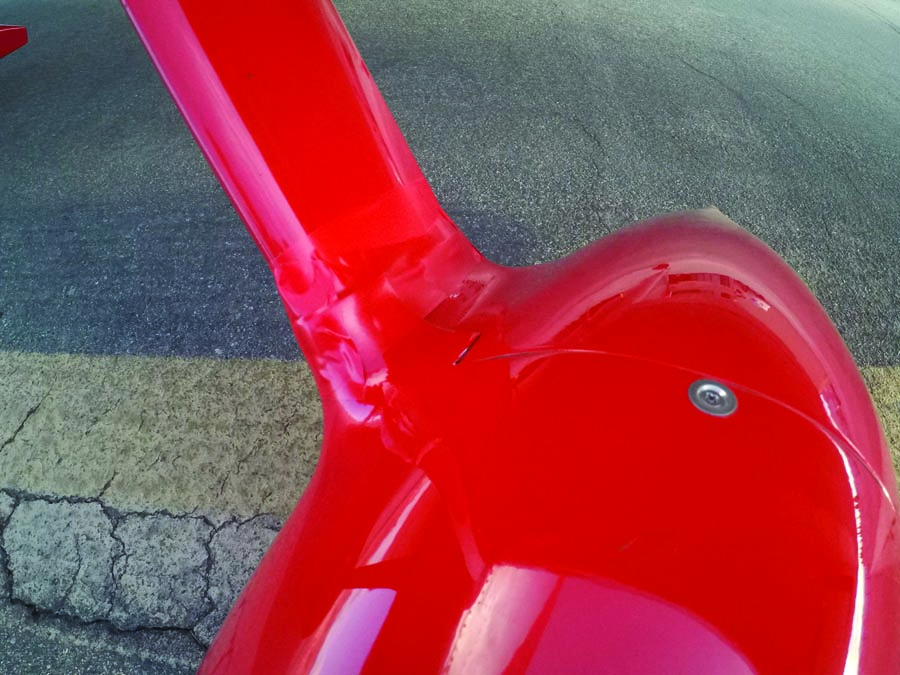 While I have looked at the change in drag through its effect on top speed, you can also look at how much power it would take to make the same increase. Under the conditions tested, my Dynon SkyView EFIS calculated the engine power to be 64% of maximum. Let’s assume my trusty Lycoming is rated at 200 horsepower. Under the test conditions, it would have been producing 128 horsepower. Also useful to know is that power required is proportional to speed cubed. To achieve the same speed increase that was gained with all the fairings and tape by brute force would require an additional 22% or an increase in rated power of 44 horsepower. Of the two methods, fairings are by far the cheapest, most efficient, and elegant way to gain speed. 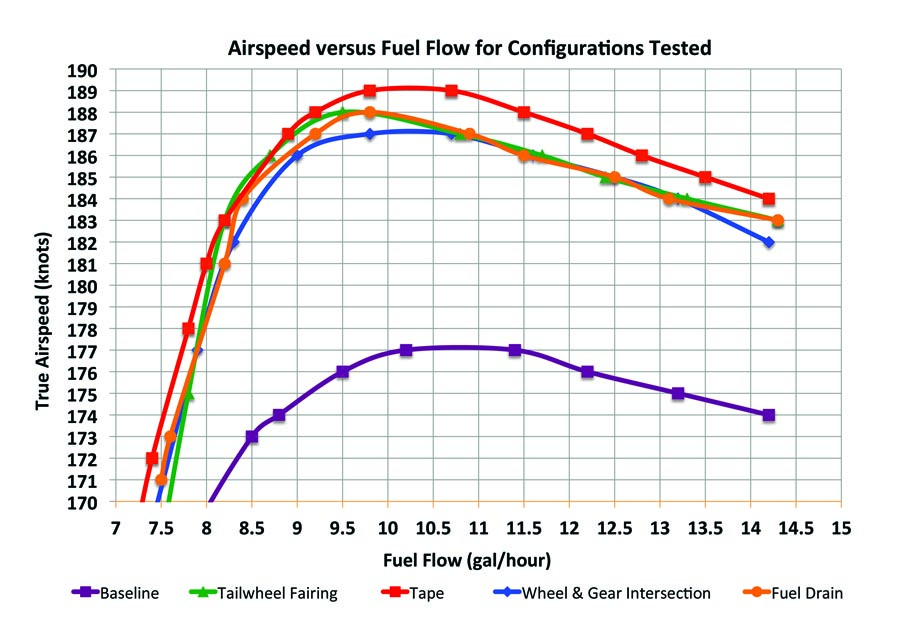 One hazard of conducting a test such as this is that you could unbalance the control surfaces, which could result in flutter.

• If you modify the control surfaces after construction, make sure they are still mass balanced prior to flight.

• Fairing over the ends of control surfaces is probably best done during construction and prior to painting so that these changes can be accounted for when mass balancing the surface.

Wheelpants and landing gear to fuselage fairings had the biggest impact on speed, but even small increases can make a measurable difference.

Wheelpants and intersection fairings made a significant change. Unless you operate your RV from a rough strip, I can’t think of a good reason not to install wheel fairings. Although Van’s makes no specific claim about their tailwheel fairing, my plane gained 1 knot of top speed with it fitted, and it does look better. It’s worth the weight and cost in my opinion. Gap-seal tape was not able to stay attached above 180 KTAS, but might prove useful on a slightly slower aircraft. The fuel drain fairings did not improve the top speed, but they certainly improve the aesthetics. Using a roll of vinyl tape over gaps was cheap and resulted in a 1-knot speed increase, but is not a realistic long-term solution. Taking the time to fair all intersections and reduce gaps between control surfaces may seem onerous during construction, but the cumulative effect of many small improvements can be measured and is much cheaper than trying to add more power.

Mary Bernard - September 19, 2011
0
Mary Bernard discusses the challenges companies face when they try to improve an existing design, let alone develop a new product. The Glasair Sportsman TC is a case in point.