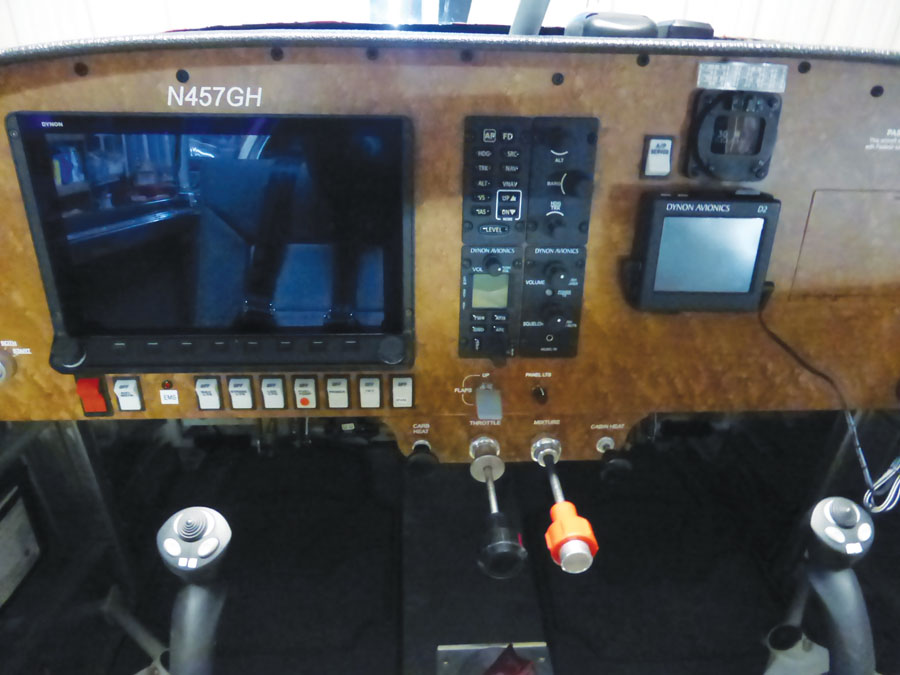 On a clear and brilliant October morning, my airplane partner George and I set off in Finder, our brand-new RV-7A, to do some autopilot tuning in the local practice area. It was our first time flying together, having recently completed 40 hours of Phase 1 testing, each of us flying solo during that time.

A major investment in the plane was an integrated Dynon SkyView avionics system, a Vertical Power unit, and an elegant panel with a bird’s eye maple finish. We worked closely with SteinAir on the panel design, giving much attention to the placement of the HDX EFIS, Dynon control panels, and a row of rocker switches below the EFIS.

My two partners had been building the plane for over ten years; I came in for the last two. My major contribution was the electrical wiring and avionics installation and setup, a surprising feat for someone who had been mystified by the electrical engineering courses he had to take for an aero engineering degree way back in ancient times. But I did take EAA’s Avionics and Electrical workshop at AirVenture in 2016, which proved very worthwhile. 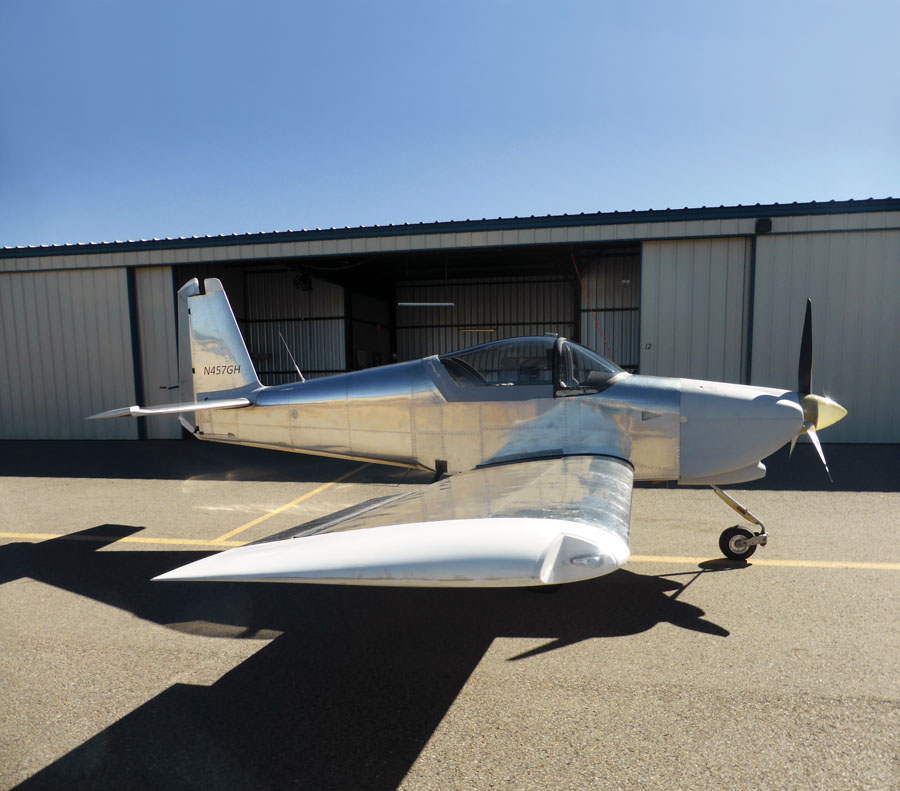 Having recently completed 40 hours of Phase 1 testing, my airplane partner George and I set off in Finder, our brand-new RV-7A, to do some autopilot tuning in the local practice area.

George and I were delighted by our new freedom to fly and how the autopilot worked without a hitch. After the first phase of AP tuning and a bit of sightseeing, I checked ATIS and turned back to KSAF, our home field.

Entering downwind, I did a GUMPS check and was told by tower we’d be number two for landing. Less than a minute later, the engine started running rough—very rough. After a couple of seconds of “Yes, this is really happening,” I checked the boost pump switch—already turned on in the GUMPS check—and mixture, throttle, carb heat, and mag switch. Adjustments had no effect. I told the controller we needed to get on the ground, and he immediately cleared us to land.

I made a short approach and slipped to a decent landing. The engine quit on rollout, but we had enough momentum to get off the runway, though not over the taxiway hold-short line. 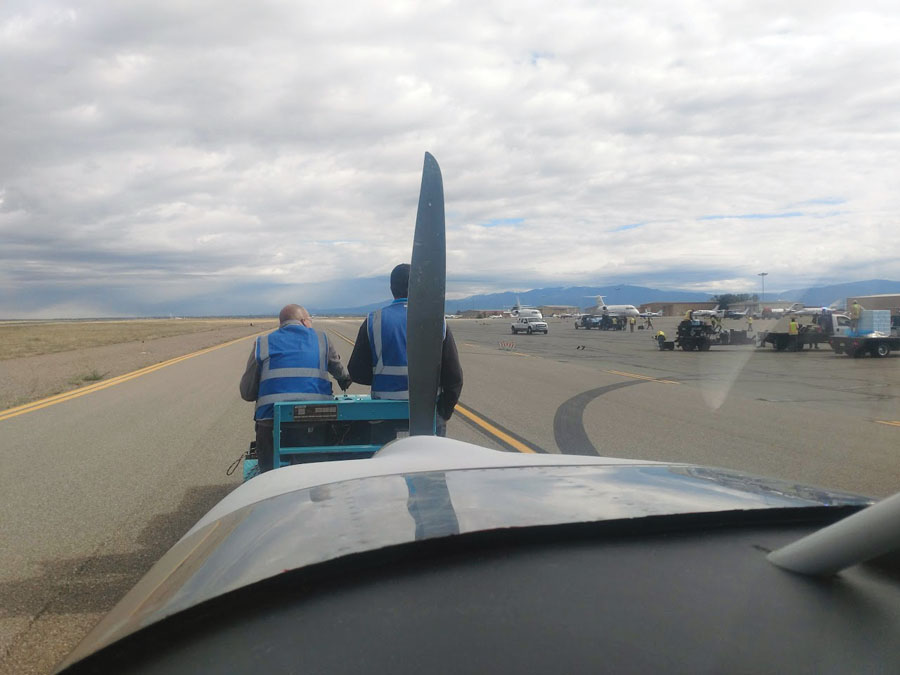 View from the cockpit as we were towed to the ramp after the engine quit on rollout. We had enough momentum to get off the runway but not over the taxiway hold-short line.

As the tower arranged for a tow, I made sure everything was shut down. Hmm—the primer switch was on! After an ignominious tow to the ramp and waiting a bit, I attempted an engine start with boost pump off and no prime. Sure enough, it started right up and ran just fine, and we were spared being towed all the way back to our hangar.

After realizing that I’d inadvertently turned the primer on along with the boost pump during the GUMPS check, which had flooded two cylinders and created a two-cylinder O-360, I ran through everything I could think of that contributed to the incident. 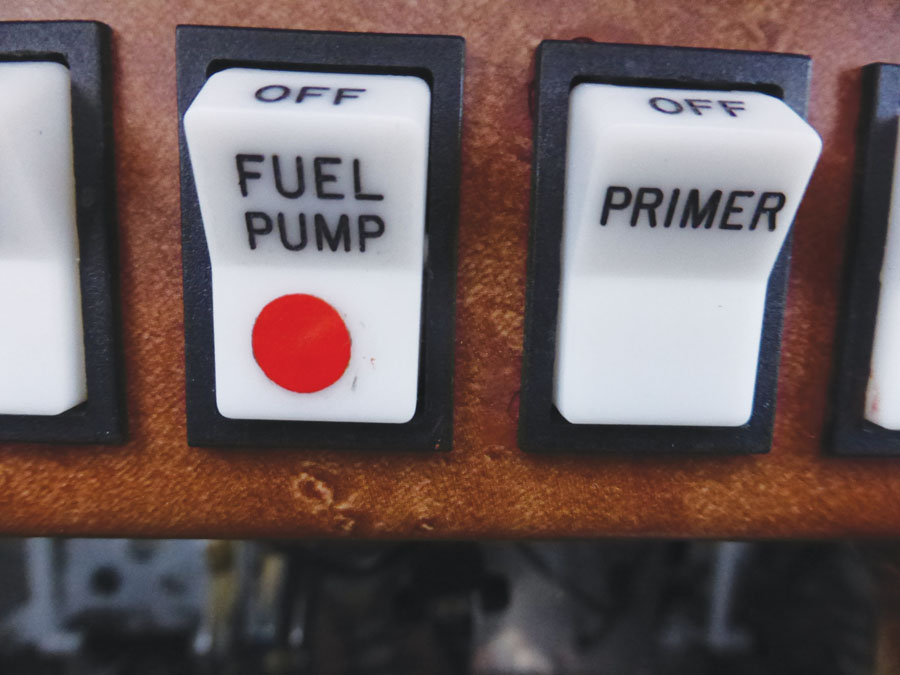 Replacing the original primer switch with a spring-loaded, momentary-on type rocker switch greatly reduces the possibility for human error. Verification of the primer switch being off was also added to the engine failure checklist.

More than anything, it was very fortuitous that this happened right next to an 8000-foot runway. And after a few days of pondering, I came away with four big lessons learned:

1. Design for safety, not necessarily convenience. Early in my career, I had a stint in system safety on an Air Force missile program where I’d learned by heart that if you can’t eliminate a hazard, controlling it by design, rather than procedures or training, is the best option. In this case, I had installed the switch for the primer solenoid valve next to the boost pump switch, which reflected the engine start procedure of turning on the boost pump and giving a two-second shot of prime. However, that set up an error-likely scenario of inadvertently turning on both switches when the engine is running. If I’d been in a consequence-aware system safety mindset during panel design and wiring, in addition to enthusiastic builder’s mode, maybe I’d have caught it.

Fix: Moving the primer switch was my first thought, but I decided to replace it with a spring-loaded, momentary-on type rocker switch. That greatly reduced the effect of human error, but still preserved the convenience and required minimal rewiring.

2. The same safety implications may apply to different, but similar, systems. I learned to fly in 1970 in a T-41, and after a decades-long hiatus from aviation, returned to flying Cessnas for the Civil Air Patrol in 2012. Verifying that the primer plunger is in and locked is a before-takeoff and engine-failure checklist item in most of the CAP planes I fly, but somehow I didn’t transfer that knowledge to our RV, with its solenoid-based primer.

Fix: Added verification of the primer switch being off as an engine failure checklist item in case the momentary-on switch fails closed. (If prime is turned on before takeoff, you’ll know it almost immediately.)

3. Continue to knock off the rust. My instructor in that T-41 had just gotten out of U.S. Air Force pilot training himself, and if he’d stressed primer-related problems, I was flying jets after that and long ago put it on a mental bookshelf. I sometimes wonder what other voids are in the aeronautical corner of my brain. It’s a “don’t know what you don’t know” question, but all I can do is to continually take advantage of lessons learned and safety training from AOPA, EAA, FAA, etc., learn from other GA pilots, and use my check rides as educational opportunities.

4. Review emergency procedures often. My response to the situation was instinctual and could have been more methodical and thorough. For example, I didn’t try switching fuel tanks, and though that wasn’t the issue, it’s a procedural step I missed. And perhaps if I’d reviewed the engine failure checklist more, I’d have caught the missing primer-off check. To my credit, I suppose, I’ve spent considerable time practicing engine-out approaches at a nearby airport and determining (at altitude) the altitude needed for a turn back to a runway.

I’ve long believed that lessons learned are one of the best ways to become a safer pilot and hope this anecdote can help others avoid similar surprises. If I’ve missed something, let me know.