As a longtime user of the Dynon original product line, specifically the EFIS D100 and EMS D120, I was eager to sample its latest endeavor, the SkyView system. During Oshkosh, I had the chance to fly a Gobosh LSA fitted with the largest of the SkyView screens, an impressive 10 inch display.

This particular Gobosh was fitted with the single screen, the latest mapping software, a single AHRS (attitude heading reference system) module and an engine-monitoring (EMS) module. The SkyView system is highly modular, in fact; you can have one screen and one AHRS box, which contains the attitude sensors, magnetometer, and pitot/static connections—and then add a second AHRS sensor pack, the EMS, as well as the recently released ARINC-429 module (for getting more data from your Garmin GNS 430, for example) and remote transponder. You can also add a backup battery and autopilot servos, though this particular Gobosh was meant to be hand-flown. Oh, yes: And more screens.

First impressions of the SkyView are overwhelmingly positive. The screen is bright and crisp, and the grooves between the eight soft keys and the screen carry the eye nicely; there was no problem with brightness or glare in the Gobosh, despite its having a large canopy.

When using a single screen, it’s expected that you’ll spend most time with the display divided into three vertical slivers, two equally sized for the primary flight display (PFD) and the multifunction display (MFD)/moving map; the EMS screen is half the width of the other sections. What’s more, it’s possible to rearrange the components literally on the fly, though it seemed natural to have the PFD on the left, the MFD in the middle and the EMS to the right.

The knobs at the lower edges of the bezel work in joystick fashion (click up, down, right and left) as well as rotate. Dynon’s methodology is to click up or down to enable the menu system—the current mode is always annunciated, such as “(HDG)” to show it’s in heading-adjust mode—and then you can click through the choices, which change the settings for heading, barometric pressure adjust, altitude bug, airspeed bug and vertical-speed bug. The modes come alive right away; you don’t need to acknowledge or dismiss the menu, just twist to get what you want. Typically, the left-hand knob manages basic flight settings, while the right knob sets the moving-map screen scale.

Dynon’s synthetic vision is very good, though it was a bit hard to get wowed in the flatlands around Oshkosh. Terrain is color coded for elevation, and clever touches abound. The terrain has a faint checkerboard overlay to give it depth, and the white true horizon line has major magnetic markings. One quirk, easily compensated for: The slip-skid ball is at the top of the display. I had trouble finding it for the first 2 minutes, but soon learned to stop looking for it at the bottom of the screen. The SkyView’s high resolution (1024×600 pixels on the 10-inch, 800×480 on the 7-inch version) allows the vertical tapes to be finely drawn. Unlike Dynon’s legacy instruments, the pictorial vertical-speed indicator (VSI) is large. The horizontal-situation indicator (HSI) allows multiple overlays. On the split screens, the HSI’s size is fine, but it looks quite small when the system is in full-screen PFD mode.

As you probably expect, basic flight maneuvers failed to confuse SkyView, and the instrument reactions appeared to be right with the actual airplane. It took me just a few minutes to become accustomed to the layout and symbology, but then I’ve been flying glass since 2006. Those of you transitioning from conventional gauges should plan on several hours of acclimatization. 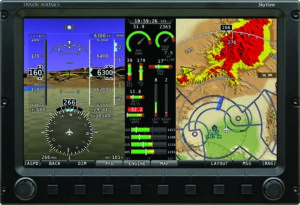 Moving map features are evolving, but the basic database is already in place, as is simple direct-to navigation. It’s worth looking at Dynon’s features page to appreciate what is currently in the box, and what the company is planning to implement in the near future. I was told that implementing the basic features took the most development effort and that the new features will come quickly.

Dynon’s initial SkyView release, as evidenced by the Gobosh installation, is strong. But there are areas that Dynon is aware could use a small amount of fine tuning. For example, the acceleration rate on the knobs is far too great. (Acceleration is a software trick that assumes the faster you turn the knob, the more quickly you want the data to change.) In the current form, it’s too easy to overshoot the desired setting. Also, the vertical-speed readout is a bit jumpy, and the flight-path marker, being white, is sometimes hard to pick out of the background clutter. Dynon’s representatives had already heard comments like these, and claim to be working on solutions.

With SkyView, Dynon is off to a great start. And that’s an assessment bolstered by the competitive pricing. A single-screen/single-AHRS system begins at $3900 (or $4800 for the large screen), with an extra AHRS costing $800. The EMS module is $600 (plus sensors), the backup battery is $180 and a GPS module (built into the antenna) is $200. The newly introduced ARINC-429 module is $475, and the soon-to-be-available remote transponders (built by Trig) are $1800 to $2200, and include TIS (traffic information service) as well as ADS-B Out.

Kitplanes - November 16, 2007
0
In keeping with the spirit of this years Directory of Plansbuilt Aircraft, Editor-in-Chief Marc Cook extols the virtues of enjoying the process of building of an airplane as much as the flying of it.