A couple of years ago, I was removing an old fiberglass shower enclosure using an angle grinder. The thing slipped out of my hands due to the torque, and rattled its way to the floor—but not before visiting my knee on the way down. Five stitches later, Louise convinced me that I needed to use my tools more wisely; it wasn’t the grinder’s fault, it was the user. 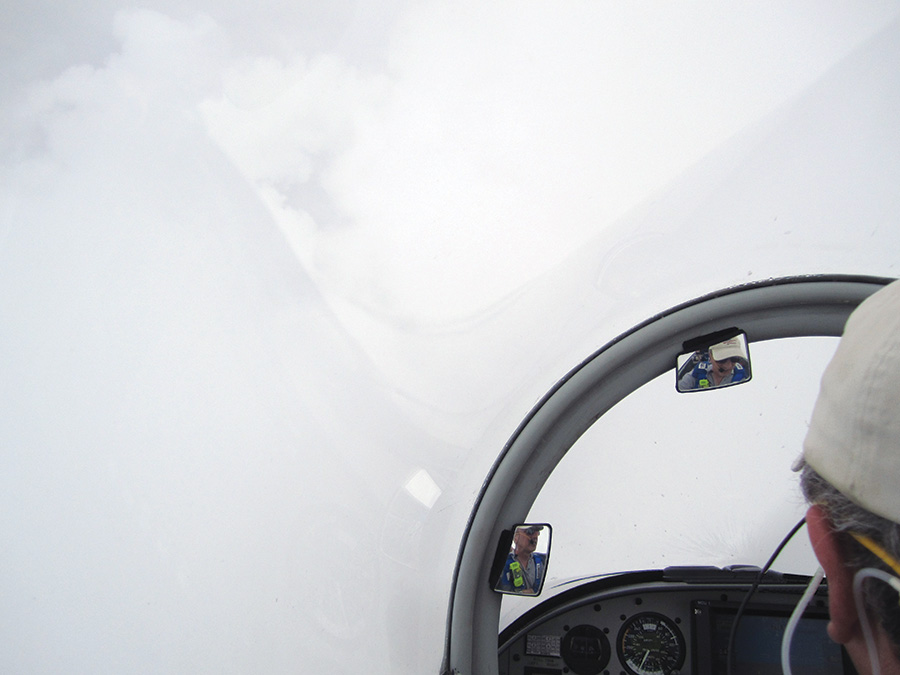 There is something surreal about flying an airplane with a bubble canopy in instrument conditions. The pilot truly begins to feel part of the cloud.

Well, the same thing is true with our well-equipped modern homebuilts chock-full of advanced avionics. Many of us can tell stories of under-experienced pilots getting themselves into nasty spots due to expensive equipment that they could afford, but that they had not yet acquired the wisdom to use. (Note that airframe names and pilot occupations were left out on purpose, to avoid going down an ugly road.)

A good example of the care to which these tools must be put is a trip we took from our home near Houston to the mountains of California—Big Bear Lake, to be exact. Texas was suffering the worst drought in recorded history, so naturally, the one day that we had set aside for this trip saw a prediction for thunderstorms in West Texas and low clouds until late morning/early afternoon for the central and western parts of the state. We usually have enough fuel to make El Paso without trouble, but my number one rule when dealing with weather is that you can never have too much fuel—the better to run away with. Rule number two is that I rarely file IFR around thunderstorms, because I’d rather be out of the clouds where I can keep an eye on things, even though I am watching XM weather. But in this case, the low ceilings forecast made that a bit problematic; MVFR on both sides of the Texas hill country generally means IFR in the hills themselves. Not a place to scud run. Of course, we wanted to leave early because we wanted to get across the convection area before anything major cooked up. But earlier meant lower ceilings along the way.

The plan I settled on was to file IFR for the extreme west side of the Hill Country—right up to about 50 miles short of the convection. I could retreat all the way home and have an hour’s reserve if I had to. We’d fuel up there, re-evaluate, and do the most sensible thing—go on, go back, or sit and wait it out as seemed prudent. The first leg was simple—good weather, clear until Austin, with a “cleared direct Sonora” as requested after clearing Houston Approach’s airspace. After saying goodbye to Austin Approach and hello to Houston Center, we were cleared to descend at pilot’s discretion for Sonora and broke out about 2000 AGL so a procedure wasn’t necessary. It was good that this was a simple leg, because after checking to make sure that Sonora was a no-brainer on the weather, my attention was mostly diverted to the weather beyond—what we’d be dealing with on the next leg. 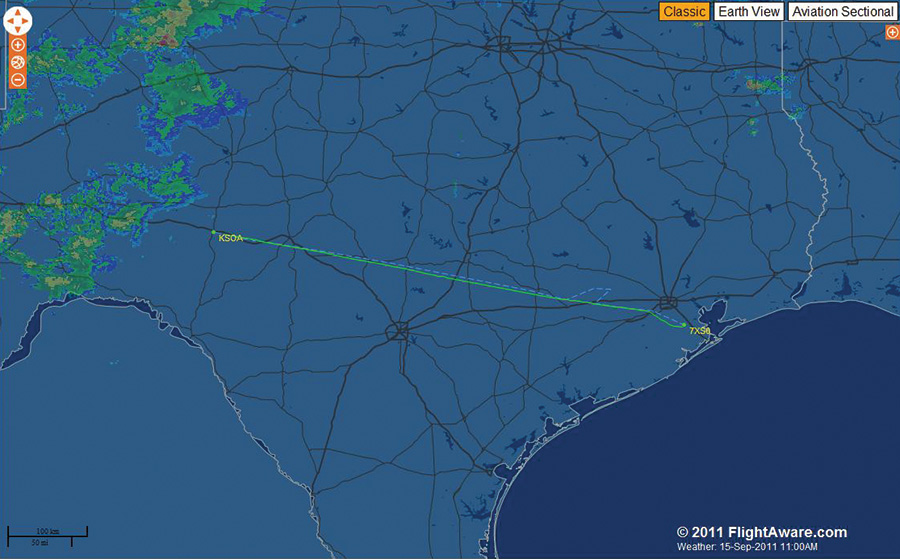 The weather on the first leg of the trip was benign—but the NEXRAD images showed the developing weather ahead.

The Limitations of Tools

We all know that NEXRAD radar in the cockpit is a godsend (at least those of us who have used it know that). We also know that it has limitations. Those limitations include latency (it can get old), and coverage holes. There are still places with no useful radar coverage, mostly out west. Storms can hide in those holes, and that can be bad. The answer to both of these limitations is, of course, to spend some time watching in advance of arrival to look at the coverage and see how things develop. The time to deal with weather is not when you penetrate the first bad stuff, it is way out in advance, when you have time to study and develop a safe route through or around.

In this case, there was mostly one developing area of weather right around and west of Fort Stockton. It showed lots of green precip, some yellow, and was beginning to show the orange and red pixels that told me it was growing. There was additional green up towards Midland. Down south of Fort Stockton…well, that you have to take with a grain of salt—the old radar coverage thing. I have often been able to end-run these storms by going down around Marfa, but have also seen storms out there where none were showing on the NEXRAD. The valuable thing about watching the NEXRAD pictures as we flew from Houston to Sonora was developing a feel for how fast things were building (or not) and how good the coverage was out west.You can do this by looking to see if big, developed things magically appear at the edge of what you see, or if the development looks complete. I would never want to take on a line of fully-developed weather that I was just shown. I want to know its history.

The next thing about being wise with tools is expecting to lose them—especially with single-string tools like NEXRAD. Yes, you might have two weather receivers, as we did this trip, but it’s still coming from a single source. You need to know what you are going to do without them. This is why I rarely file IFR into an area of convection, because things can blow up behind you and cut off a planned escape route. And it is another reason to take a good look at the way the weather is developing. In this case, I got the rhythm of the weather and realized that we’d always have a good escape to the northeast, because there was a frontal boundary that was separating the good from the bad. So long as the area didn’t form a strong, thick line before we got there, we’d punch through the rain quickly and be through to the other side and freedom in no time. 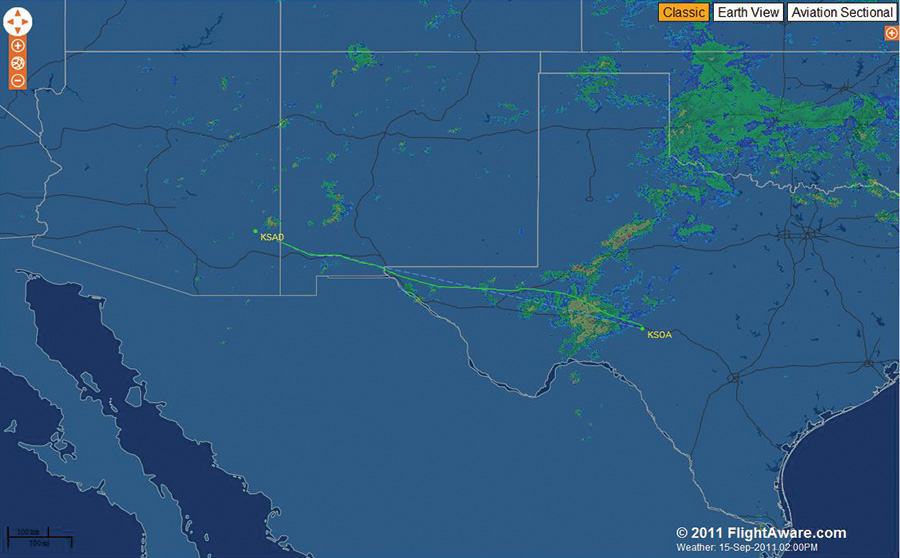 Deviating around the developing cells wasn’t hard with NEXRAD in the cockpit­—but it required an IFR clearance to work through the layers of clouds in West Texas.

Caution is the watchword—you have to expect things to go wrong. But weather doesn’t usually deteriorate instantly. Knowing what it is doing—and has been doing—in advance is a good way to predict the near-term future.

Aircraft failures? Well, that’s what we have redundancy for. Single engine? Sure, but have you seen the flat-lands of west Texas? There is an abundance of places to go where you might tear up the airplane, but the landing will be survivable, so long as it is under control. Having an advanced EFIS suite of tools such as moving maps, synthetic vision, and synthetic approach capability gives you a significant edge if you suddenly needed to make an emergency approach to just about anywhere. I long ago accepted the risk of single-engine IFR, and the tools we have today give us much more margin than we had back then. 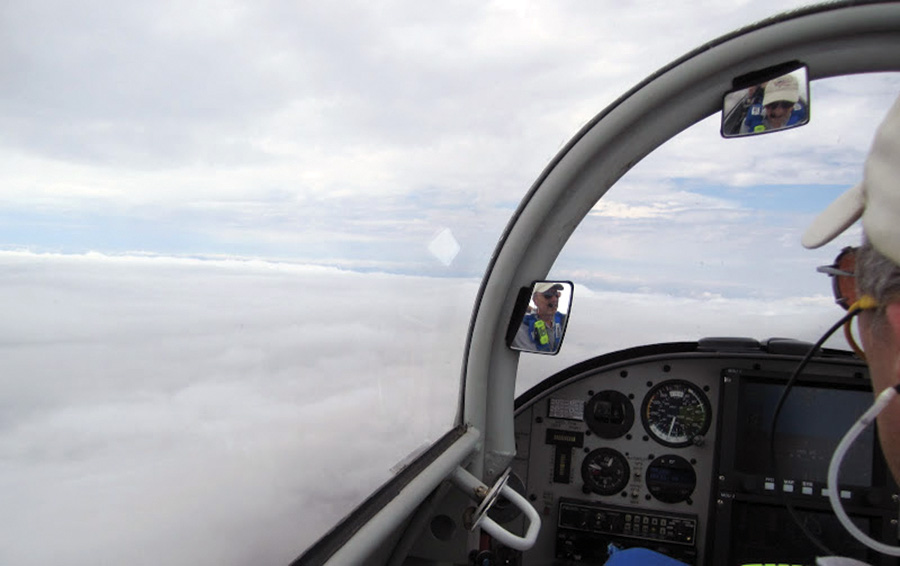 With the building weather behind him, the author is left with a layer of clouds below and blue skies visible ahead.

Why was I willing to bend my no-IFR-with-thunderstorms-around guideline?

1. Alhough there were broad areas of light rain, the actual convective regions were small.
2. Careful long-term study of the convection showed it to be slow to change.
3. Low VFR flight was impractical due to low ceilings and would have been more hazardous.
4. Good bailouts to the east could be maintained.
5. XM/NEXRAD coverage was verified by long-term study.
6. Terrain was fairly benign.

So as we climbed into the clouds on departure from Sonora, I was feeling pretty confident that we were going to beat the development of the bad stuff for the day. We contacted Center when airborne and were cleared direct to Silver City, New Mexico, with deviations for weather approved as required. Most of the yellow (and more intense) radar return was south of the I-10 line through Fort Stockton, so I began a slight detour to the north to keep it 20 miles off my left wingtip. The few orange pixels to the north were well right (over Midland) and ahead; we merely had a little green.

For an hour or so, we cruised along between layers and with little wisps of cloud or small cumulous buildups to punch through. The rain, when we got to it, wasn’t really enough to wash the bugs off the windshield, but it did get the GIB (Geologist in Back) a damp neck. We both kept a careful eye on the NEXRAD, which was set in animation mode so that we could see trends, and were happy to see that while the cells were changing shape, they weren’t moving much. 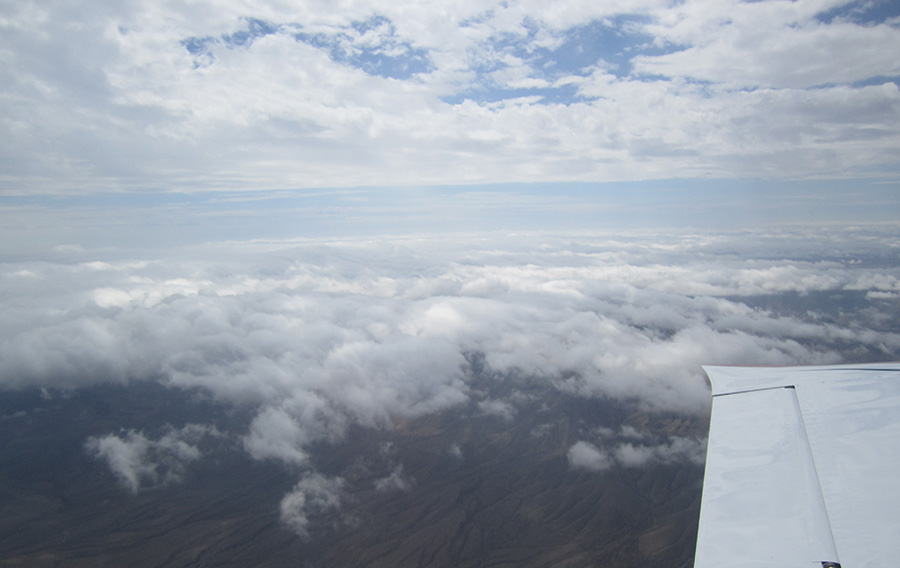 Eventually the clouds begin to break up and the route to the West Coast is clear.

Clearing the backside of the general area of convection, we found ourselves about halfway between Fort Stockton and Pecos, ready to go direct to El Paso, with ragged clouds underneath and plenty of views of the desert below. I was glad we were IFR, because there wasn’t much room between the bases and the rising terrain approaching the Davis Mountains.

From that point on, it was pretty much a cakewalk, except for a single stubborn cell southeast of El Paso that threatened to push us a little farther north, but proved in the end to be stubbornly stable where it was. Checking in with Albuquerque Center on the far side of El Paso, we changed our destination to Safford, AZ to get a few more miles underneath the wings before setting down for fuel, and enjoyed the views of southern New Mexico as the miles passed.

Weather flying is always a challenge and one of those parts of aviation that you can only learn from experience. Providing yourself outs, understanding your own personal rules (and why those rules are set) and being well equipped, are good ways to increase your margins and thereby reduce the overall risk. Flying will never really be safe, but taking effective action and using good judgment to reduce risks is always a step in the right direction.