Home Magazine Exploring What’s The Worst That Could Happen?

Aviation is not inherently dangerous, but it is terribly unforgiving of the slightest inattention.

We have all read or heard pithy statements of that type, and it is easy to toss them off as overblown or overly cautious. But the truth of the matter is that they are actually true. Aviation is an area of human endeavor where we really cant afford little missteps or moments of inattention. It has been said many times that a J-3 Cub is a great airplane because it can just barely kill you. Well, that is definitely accurate. Any time you get yourself going faster than 30 miles an hour more than 20 feet off the ground, you are putting your body at risk. And some of the risks are not intuitively obvious to those new to aviation, or to aviation maintenance. Even for those of us with lots of experience, it pays to ask questions about everything we do. The question I ask most often when looking at a problem (or deciding if something I have done is good enough) is: Well, whats the worst that can happen?

Take, for instance, something simple such as the cowl side pins on an RV, those long hinge pins that hold the top and bottom of the cowling together. There are numerous ways to secure these pins, and I have seen all sorts of creative solutions-from welded-on tabs to curlicue ends, screws, bent configurations that trap them in holes-and elegant solutions such as putting them in from behind. With so many ideas, how can one choose? Does it even matter?

Well, let’s look at the worst that can happen. What if vibration allows the pins to back out (which means they creep forward)? They could, if they move forward enough, get caught in the prop and start cutting a groove in it. At best, this will cost you an expensive prop. At worst, well, what if you don’t catch it in time? Losing a blade can cause the engine to come off the mounts and, frankly, at that point the game is over. Those simple little wires can lead to a terrible end. Yes, this is worst case, but if you can slam the door on the case by spending an extra hour or two building a foolproof capture method, well, thats an easy choice. 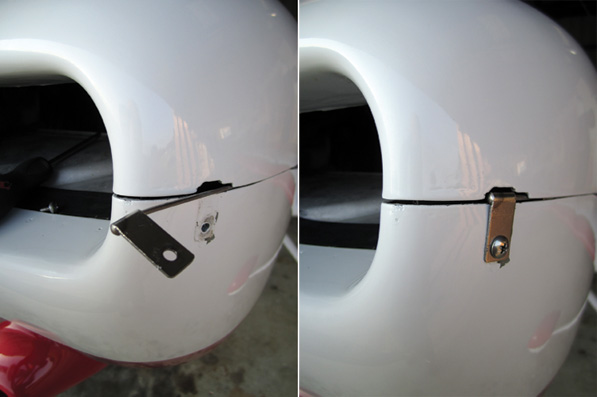 Or look at tire/wheelpant clearances. We all would like to have as little aerodynamic drag on the airplane as possible, and keeping those wheel openings tight is a good way to do it. But if they are too tight, you can cut a tire on the edge of the pant when the tire compresses in landing. I know of at least one case where a flat tire on landing caused an RV to run off the runway and flip-on its maiden flight. Thats a costly mistake when you consider that the required wheelpant clearance is well-known by those who have gone before. Trimming the fiberglass a little more versus the worst case of a totaled airplane and possible serious injury? Take the time, do the work, and live to fly another day. 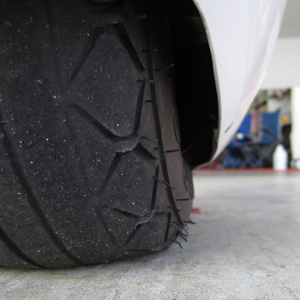 Wheelpant clearance. There are builders who seek every small increment of performance and cut the fairing to run very close to the tire. Efficient? Sure. Practical? Not really.

I have seen people experiment with all sorts of things in the fuel systems of RVs. While experimentation is what homebuilding is all about, there are certain methods that we use in aviation because people died before we had learned how to do them. Tubing flares are 37-don’t ask why, they just are-and if you try to use a standard automotive flaring tool (a 45 tool) with aircraft fittings, you are likely to have a leak. A leak of fuel in the cockpit is horrible; having a fuel leak in the engine compartment with all that heat is even worse. Likewise, securing fuel lines, and giving them sufficient slack to compensate for engine movement, are important techniques that are well-known in aviation maintenance. We ignore these standard techniques at our own risk and, unfortunately, at risk to others. Worst case? Fire! That word alone should be enough to make you put down the tools and go study Tony Bingelis’s excellent books on firewall-forward techniques.

How about those loose pens and pencils that accumulate when you drop them on the floor in the cockpit? No big deal-until you’re upside down in a loop, and one finds its way into a control stick linkage. Inability to control the airplane rivals fire for gut-wrenching fear in my book.

Then there are those tail attachment bolts. How many times have you put them in and taken them out, and how many times have you used the lock-nuts? Is the cad plating scratched off? How do the heads look? Aircraft hardware is designed to close tolerance because weight is important. There isn’t that much extra material, so if you have damaged a critical fastener in any way, it is probably trash. Is it good enough? Well…whats the worst that could happen?

Read Up on It

These are just a few examples of the kinds of situations where it is easy to cut corners on time or effort, or just things that a person new to aviation (no matter how much experience they have had in other mechanical endeavors) might not know. It pays to have a questioning mind and the self-discipline to ask yourself if there is something that you need to look up. Reference manuals are easy to find: Advisory Circular 43.13 is a great place to start, as are the Aircraft Mechanics Handbook (the little black book) and the Tony Bingelis collection. We do many things a certain way in aviation because we have learned the hard way that they had to be done that way. Too often, people died to figure them out.

Remember that if a wire wears through or a coolant hose breaks on your car, the worst that might happen is that you get stuck by the side of the road. The consequences in an airplane can be far greater, which is why we demand a higher level of reliability as well as design excellence in everything we install. Its first and foremost your neck that is on the line. But your passengers will be in the same boat, so when you have a doubt about what you are doing, don’t be afraid to ask Whats the worst that could happen? If you don’t like the answer, then it might be time to do some rework.

Scott Spangler - June 14, 2011
0
Starting as a Texas Sport kit, a little Cub with the unlikely name of Scrappy grew, with a host of custom touches and multigenerational effort, into a cherished family heirloom.