Dick Starks Dawn Patrol article, Were going to have to count that as two landings, in the December issue is an illustration of Branstroms Law of Aviation: The quality of a landing is inversely proportional to the size of the audience. Keep up the good work, Dick.

I have to admit that in seeing the cover of the November issue of KITPLANES I was tickled pink to see a flight review article on the Rand Robinson KR-2. I enjoyed the article as a whole, but I have to admit coming away from reading the review with a bit of a stale feeling. I understand the writers comments and believe them to be completely honest and accurate about the aircraft he flew.

The problem I have is with the writers choice of which aircraft to review. I am sure that Allen Buzza (the KR-2 builder in the November article) is proud of his creation, and I applaud him in his success. But there are other more well-known builders and aircraft in the KR community that I feel would have given the writer, and more importantly, your readers, a more accurate idea of what it is like to fly a well-built KR-2.

Most of the issues the writer found during the flight review have been addressed and corrected in the past 10 years, resulting in different revisions of the KR family, such as the KR-2S (stretch) and a new wing that was engineered and wind-tunnel tested just for the KR aircraft.

I encourage your readers to visit different web sites involving the KR-2 aircraft to read up on what others have to say about flying the KR-2 and what different builders experiences have been flying the stretched fuselage with the new wing and other improvements. The KR-2 rivals the RV series of aircraft at a fraction of the cost.

Thanks for your comments, James. Well provide links to the many web sites he includes with his email at www.kitplanes.com.-Ed.

I always love getting the Kit Buyer’s Guide issue! When I eventually turned my attention to Page 39, however, I had to do a quick double take on the sixth design down! I really am in a quandary: Is this design a real stinker? It resembles a kitty fox but not quite! I can only assume it is something rolled out of the fabled skunk works.

Got my December 2010 KITPLANES yesterday. And as usual, the cover enticed me to open it and start reading immediately. So I did. Then I got to the picture accompanying the Seastar Sealoon on Page 39. I have to admit that I cleaned my glasses, looked again, and still remain perplexed. I thought I could come up with eight to 10 explanations, but Ill wait for yours.

I would love some more info on the Amphibian Airplanes of Canada Seastar Sealoon. From the photo in your guide, I cant tell if it is a pusher, or a taildragger. Its a cute little stinker, though.

These are among the many responses we received after the December issue went out. Heres the story. Every year, we contact all kit manufacturers and request updated information-specifications, prices, and so on-as well as new photos. Some of them in our possession are quite old, you see. The AAC representative later confessed that he was out in the field and couldn’t fulfill our request, but in the heat of the production moment, we decided to place a photo that might just get the attention of AAC and, in a none-too-subtle way, provide some leverage with other manufacturers in the future. So when we ask for a photo, you better give us one or well come up with something for you!-Ed.

Regarding your notations in the Buyer’s Guide that certain motorglider designs are LSA Legal, are you certain that an LSA pilot is allowed to fly a motorglider? I am of the impression that to do so I need the following to get a motorglider ticket: at least 10 hours of flight time in a glider, and that flight time must include at least 20 total glider flights; 2 hours of solo flight time in a glider; be trained and qualified for the self-launching that you utilize; have passed the FAA glider written examination; and have passed the glider flight exam with an FAA examiner. You need a license but not a medical.

Incidentally, the FAA has only four requirements to distinguish a motorglider (called a powered glider by the FAA) and none of these preclude E-power from being used. A motorglider must be either single or two-place (no double back seats allowed); be limited to a maximum gross weight of 850 kg (1874 pounds); have a weight/span loading maximum of 0.62 pounds per square foot; and have specified engine instruments. As a point of note, pure gliders (as opposed to motorgliders) have no instrumentation requirements (because they are not airplanes) other than those included on their individual Type Certificate Data Sheets.

You’re right, Les. We elected to use the LSA Legal catchall for aircraft that can be flown by those without a medical. While the majority of them will be Light Sport Aircraft flown by Sport Pilots, as you point out, not all will be.-Ed.

Barnaby Wainfan - September 12, 2019
0
Last month we took a look at the basic characteristics of the two most... 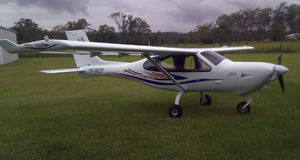