Most pilots of single-engine aircraft live in quiet fear of a total loss of power. Sure, they train for it, and the careful ones attempt to adjust the flight path (and choose routes and altitudes) to minimize the exposure—that is, to put the airplane in a place where a power-off landing can be made to hospitable terrain for as much of the flight as possible.

Responding to a total loss of engine power generally becomes more complicated and difficult the faster the airplane. For the pilot trained in, say, a Piper Cherokee, the power-off descent rate of a Glasair III or a Lancair IV-P is nothing short of breathtaking. The ultimate expression is probably the F-104 fighter, which barely had wings at all; its power-off glide speed was 285 knots, and you had to enter the high key (the spot in the landing pattern from which a landing was assured) at 20,000 feet. Yikes.

Managing an emergency in a slowly descending single is a different deal than doing so in a high-performance ship that needs 140 knots indicated and is heading downhill at better than 1500 fpm. That’s where the Vertical Power VP-400 comes in. You know the company from its range of electrical power-management systems (electronic circuit breakers and context-based power management, as two examples) so it had many of the pieces in place. The company had greatly expanded its ability to display electrical-system condition on a variety of electronic flight instrument systems (EFIS) displays. 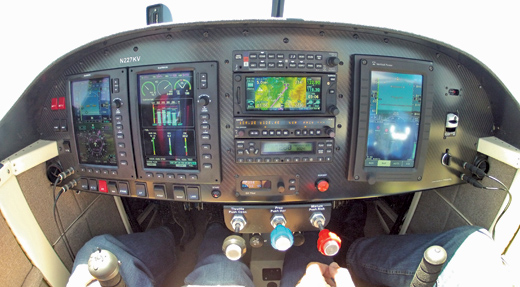 The Vertical Power VP-400 plays a backup role to this RV’s main instruments, so it’s properly positioned to the right of the radio stack.

With the VP-400, though, the implementation is new. Using a dedicated screen that Vertical Power’s Marc Ausman claims is strictly for EFIS backup—he says he has no desire to compete directly with EFIS manufacturers for a share of the main-screen pie—the VP-400 also works as a display for the electrical system, a touchscreen-activated power-management portal and, potentially, a lifesaver.

It’s this last promise that Ausman sees as the “killer app,” as they say in computer programming. The idea is simple: As you fly along, the VP-400 knows your airspeed, ground speed, track and heading. It also has a full terrain and airport database installed. It knows the position of the flaps and landing gear because it’s part of the electrical system.

But here’s the big deal: As you’re flying, the VP-400 constantly calculates a landing solution to the nearest airport, updating as you fly along, taking into account winds and terrain and other factors so that it is primed at any given moment to suggest the best option in the event of a loss of engine power. This is not a simple algorithm, says Ausman. In fact, the system has to constantly correct for winds and the airplane’s altitude above the ground; it has to consider how terrain will affect the approach to a given airport that’s theoretically in gliding range, and it has to determine how much “energy” the airplane is carrying at any given time to come up with an accurate power-off descent solution. 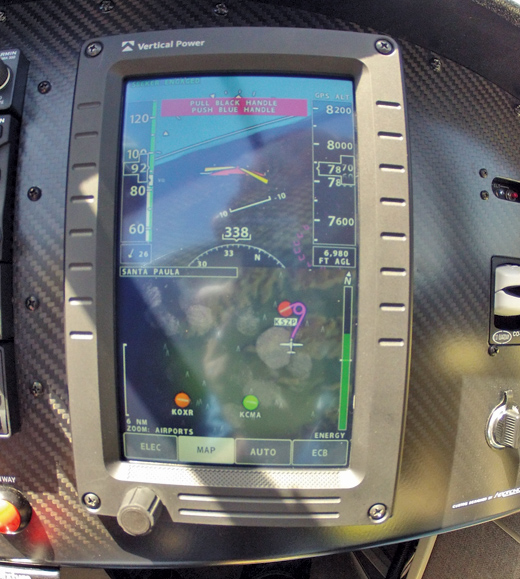 In the “runway” mode, the VP-400 display shows the path to the airport (in magenta) and the “energy remaining” scale (green bar in the lower right corner of the display).

If you’ve tried a practice no-engine landing to an airport using only the “nearest airport” feature on your GPS, you know that getting safely to the runway takes more than pointing the nose in the proper direction. As you descend toward the airport, you must constantly judge your sink rate relative to the distance to touchdown, and constantly make the go/no-go decision to continue the approach if the airplane is marginally low. You must also decide when and how to dissipate some of that extra energy if it appears you’re too close, too high and/or too hot. You have to compensate for changing winds as you descend. Experienced sailplane pilots make these complex calculations all the time, but power drivers seldom get the opportunity to get good at it—and when the situation is for real, there’s the distraction of trying to get the engine running again, so that even something as simple as maintaining best glide speed is a full-brain challenge.

Let the Autopilot Do It

In the VP-400 world, that carefully calculated solution is meant to be used to drive an autopilot so the human pilot has to do nothing more than communicate and troubleshoot. It works like this: When you detect a loss of power, you immediately punch a big red button and the VP-400 takes over the autopilot (even if it’s not engaged). On the touchscreen display are a couple of information boxes to help remind you to pull the throttle back and pull the prop back to increase glide speed. The plane will then turn toward the track-line solution that the VP-400 has been calculating and allow the airplane to slow to best glide speed. During my flight with Ausman in his RV-7, the system quickly got the airplane to 85 knots indicated and held it there very well, all the way through to the 200 foot above ground level “gate,” where the system expects the pilot to take over and complete the landing. (The system is still in development, and Ausman thinks that gate might move up to 300 or 400 feet AGL.) 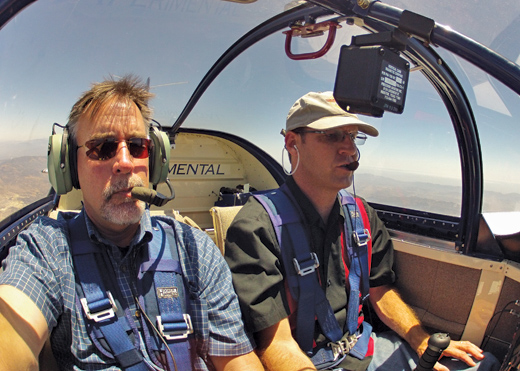 The VP-400 keeps track of all airports within gliding range but prioritizes them based on terrain, length of runway and something Ausman calls “busyness,” which categorizes some 52 high-traffic airports as less desirable than other strips. (If LAX is your only choice based on altitude, it’ll send you there anyway.) Touching the airport icon on the screen brings up the runways, color coded by desirability. The ADS-B weather was not connected in Ausman’s airplane, but with it, the system can know surface winds and recommend an appropriate runway. The system also maintains a full airport database, with communication frequencies, for quick reference.

If you’ve selected a runway that’s fairly close, the VP-400 will plot and have the autopilot execute a circling descent profile to burn altitude, all the while keeping track of distance and actual winds aloft to constantly fine-tune that descent profile. As an added measure of path control, the VP-400 will extend and retract flaps as necessary—it can even raise or lower the gear in a retractable to help manage the descent.

As the airplane descends toward the runway, the pilot can watch an energy bar graph on the right side of the display that shows how the flight is progressing. Most of us would want all the energy we can hoard, but the system is accurate enough that shooting for the Goldilocks level—not too much energy, not too little, just enough—is what you want. 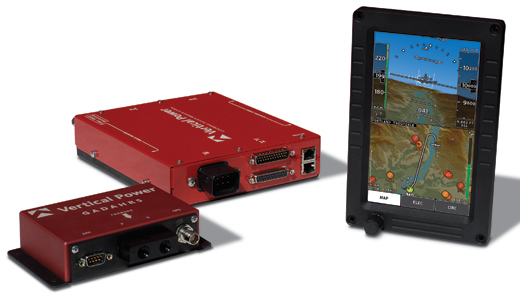 The VP-400 system consists of a touch-sensitive, vertically oriented display, the power-distribution module (center) and the dedicated AHRS (or, as VP calls it, an ADAHRS) to provide attitude information.

On the two approaches we attempted, both with the RV-7’s Lycoming IO-390 at idle, the VP-400 captured the lateral track well, albeit with a fair amount of wing rock that Ausman thinks will be remedied with some autopilot tweaking, and managed our pitch angle so that the airplane arrived over the numbers with energy to spare, but close enough to an ideal approach speed that an overshoot was never a consideration. Magic.

Vertical Power expects the VP-400 to be available in the third quarter of 2012. The full system costs $8000, but that includes the touchscreen display, a full ADAHRS module and a power-distribution module. Subtract the power system and you have the $4000 VP-300, available in the fourth quarter of this year. A system designed specifically for the Lancair Evolution will also be available.