Hi there, and welcome back. This column is going to be quite different from anything I’ve ever written. First of all, this is probably the most complex device I’ve ever foisted off onto you. Second of all, I’m going to not only show you how the PC board should be made for this project, but I’m actually going to give you the tools to make your own PC board—and a source that will do it for peanuts.

This project is a headset tester that will do anything a professional headset tester that Dinky Cluck or Toolex will sell you for beaucoup bucks. Now, I’ve got to admit that in a magazine context, space is of such a premium that most of the schematics that are reproduced here require a jeweler’s loupe and a lot of interpretation to understand. I can fix that. I’ll give you a full-page schematic to download, as well as full-size artwork, from which you can either make your own board or send it off for a little money to have made for you. (More on this later.)

First, the design goals. I wanted to be able to put any sort of civilian aircraft microphone in one jack and listen to the audio in the earphones from another jack. I wanted to be able to do that with two headsets. I wanted a lot of audio so that I could make a reasonable determination that the headsets were working well. I wanted some sort of “meter,” so that I could set the microphone levels so that all the headsets in the aircraft were matched to one another. I also wanted a little tone generator to test the earphones on the off chance that the microphones were dead, or you were just testing an earphone-only headset. I wanted to be able to run it from a regular old “transistor radio” 9-volt battery, or a 12/24-volt aircraft electrical system. And, as usual, I wanted to spend Lincolns on it rather than Franklins.

Take a look at (or download) the schematic for this little gem. Let’s take care of the power supply first. Q101 and its associated circuitry are regulated by 10-volt Zener diode D105. The output of this regulator is 9.3 volts if a 12/24 volt battery is used and 8.3 volts if a 9-volt battery is used. It makes little difference to the circuit which voltage we use. 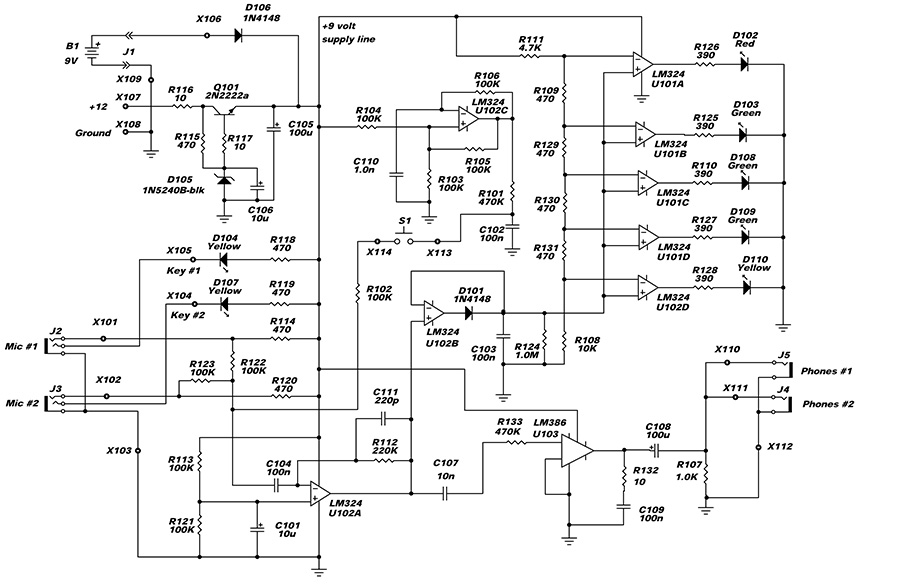 Microphone 1 is biased on by R114, which will supply about 15 milliamperes to the microphone element. The audio generated by voice modulation of Microphone 1 is output through R122 to summing amplifier U102A. If you are using a push-to -talk switch, then D104 indicates that the PTT switch is working.

Amplifier U102A is a summing amplifier that adds together the audio from Mic 1 and Mic 2, and amplifies it by a factor of two. This amplified output goes two places. One is to peak detector U102B and one is to headphone audio amplifier U103.

Peak detector U102B senses the audio from the microphone-summing amplifier and gives the output to C103 of the peak audio level of both microphones. This output goes to the level sensor bank of U101A-U101D plus U102D.

U102C is set up as a square wave generator and the square wave is rounded to a sine wave by R101–C102. Pushing S1 sends this audio to the headphones through U103.

U103 is a simple power audio amplifier with a voltage gain of 20. Thus an input of half a volt from U102A will drive the power amplifier to the 10-volt power supply rails.

Now, the fun part. First I’m going to send you to a web site to download the PC board program that I use at Sierra College in my fabrication classes. Then I’m going to send you to the Jim’s Kitplanes® web site to download all the files necessary to fabricate this project. Then I’ll give you the web site of a PC board prototype fabricator that does one-off boards for experimenters for very little money per board.

I’m not doing this strictly for this project. You may have something in mind that is the best gee-whiz gadget to come along since rudders on the Wright Flyer. This will give you the tools to make that gadget’s PC board into a real, live invention that you will be proud to show off at the next Chapter meeting.

The PC board fabrication program for my students is at www.rstengineering.com/sierra, then go to MECH-14, Class Lessons, Download PCB Program, and download Schematic & PCB.zip. In that compressed file you will find a “Read-Me-First” file that will let you install what is called a “schematic capture” program where you draw your schematic and then a PC board layout program takes your schematic and turns it into a PC board. That file also includes a full set of manuals that describe each of the programs in a lot of detail.

That all sounds so easy. If you are using a battery, a single resistor, and a single LED, it is quite easy. The difficulty goes up as en, where “e” is the base of the natural logarithms (2.718) and “n” is the number of parts you put on the board. The problem gets real big real quick, but after a couple of dozen layouts, you will be a pro at it. Questions? You can always take my class in Truckee, CA.

I will give you a tip that will save you some grief. Only use parts that are in the library. Use anything else and the PCB layout program will not have a clue about what you want to do.

The data files for this project will be posted at www.rstengineering.com/kitplanes and then the files for October 2014. Once again, please help yourself to any and all of the schematic and PCB file information that you find. 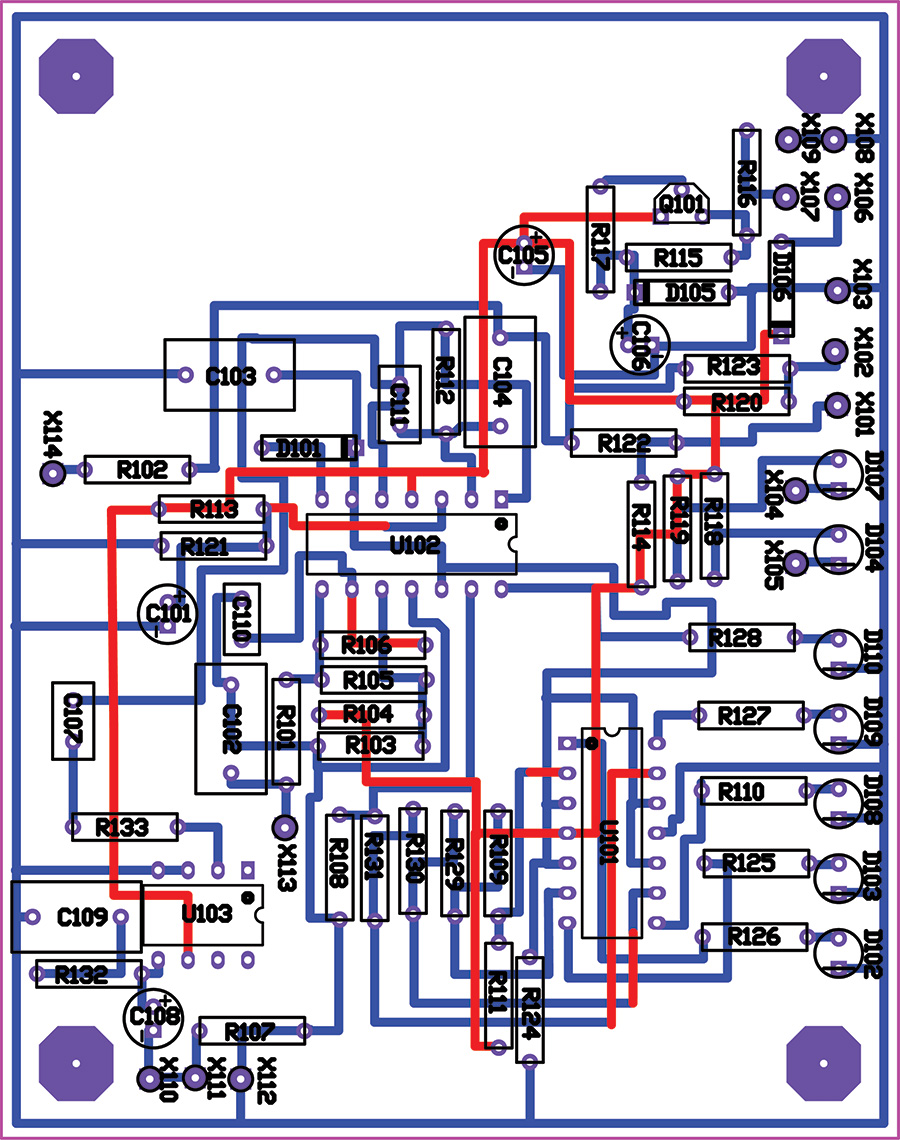 Here’s how the components lay out on a printed circuit board.

Now the big deal of the month. If you have figured out how to make a schematic, lay out a PC board, and then translate that PC board layout into “Gerbers” like the manual tells you to, there is a really neat PCB place that will translate your digital work into a real PC board. A couple of caveats:

• They can only work from a proofed set of Gerbers/NC Drill files in a zip file.

• They make three boards at a time from your file and you can’t order just one.

• They are really, really cheap—best I’ve ever been able to find.

And here they are: www.oshpark.com. Neat folks to do business with.

You’ve had the big technical column. You are now entitled to a real simple project next month to take rust off tools and hardware that may have gotten left outside by mistake. Wood construction, Harbor Freight metal box, and vibration motor by Singer Sewing Machine Company.

See you next month, and stay tuned.