Home Newsline News Half Over – All To Go! 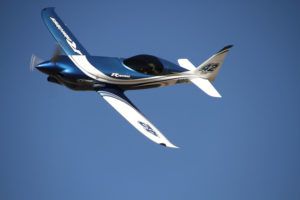 Reno Race week is an interesting phenomenon, depending on if you’re a casual spectator, or a die-hard fan (or participant). To the public – or race fans with limited time – the races are a Friday, Saturday, Sunday event. To those who are more deeply involved, the effort began a week ago, with travel to Reno and getting set up over the first weekend. TFRs went into effect on Monday, and the flying began, with practice and qualifying the beginning of the week. To be honest – it’s my favorite time – there are no crowds, the racers and their airplanes are accessible, and the atmosphere is more like a day at the airport with fun plans than a carnival event.

Racing officially started on Thursday, with preliminary heat matchups, but even those have a bit of a “warm-up” feel to them. Racing fanatics know that no one is going to show all their cards (or blow up their motor) before they get to the finals, so it’s a bad day to try and judge who is really fast, because sandbagging is certainly a factor. But it’s a good chance to get the kinks out, and for photographers to plan their sight lines and angles for pictures while the racers are out mixing it up, grooving their lines, and figuring out who they have to beat.

Friday is the day when the racing really gets going, and the in-between acts show up to entertain the crowd when the racers aren’t on the course. It’s the day when race teams begin to become a little more closemouthed about how they are doing, because no one wants to the competition to know that they’ve figured out how to get a couple more mph out of the motor or airframe. But it’s the day when you begin to see who is really going to have a chance at the trophies, and who is just out there running practice laps… to a point. The folks at the top are still hanging on to the knowledge that it all comes down to the Sunday race to figure out who is going to be the fastest!

And speaking of fastest – for those of us that grew up knowing about air racing, it has always been accepted dogma that speed is the province of the Unlimited machines. And it wasn’t that long ago that the likes of Voodoo and Strega were duking it out at 500 mph. But if you look at the qualifying speeds this year, the top three Sport class airplanes are above all but the top two in the Unlimited world in terms of pure numbers. Sure, we doubt that the top two unlimited showed all they had to post those numbers, but we’re betting that the fast glass Sports have a few ticks up their sleeves as well. The result? No matter which class is on the course, expect to see some fast streaks going past the pylons!

See you at the races!