My good friend and fellow Scaled Composites engineer Dan Kreigh (Danno) had given me access to his Long-EZ if I agreed to do the maintenance it needed to be airworthy again. The airplane had been sitting for a couple years and needed a general looking over. As a Burt Rutan fan, I was particularly excited about the opportunity to get time in the iconic airplane. I had spent a couple weeks going through the airplane, installing a new battery and looking it over, getting to know it. I had flown a Long-EZ before, but I decided to approach my first flight in the airplane as an actual first flight to prepare for my upcoming first flight in the racer that my wife Jennifer and I had been building. 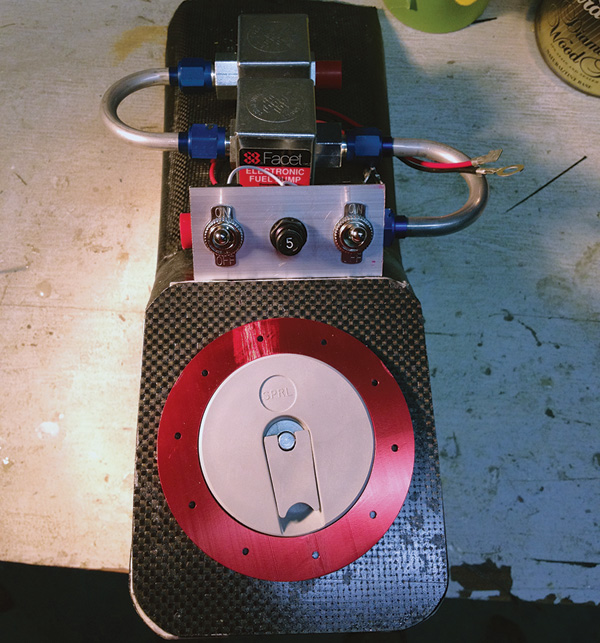 The inital revision of the fuel pedestal with the transfer pumps installed on top for the nonstop formation flight of Wasabi Siren from Mojave to Oshkosh. This is before the flange was built that eventually leaked.

On initial climb-out as I reached forward with my left hand to crank up the nosegear, I noticed my right hand felt strangely warm while holding the stick. I looked down to find it was wet. For whatever reason, I initially thought it was water running in from the canopy seal directly above that hand, but I was still puzzled by the warmth. Once I got some bandwidth, I pulled my hand to my face and was even more confused to find it smelled like kerosene. Why would there be kerosene in the cockpit of a Lycoming-powered airplane?

Still in the climb-out, I felt around the canopy seal with my left hand and couldn’t find anything that was wet. Then I felt the compass and it was wet. Warm from sitting in the sun, when I accelerated, the compass fluid tipped back and flowed out through a leaky O-ring. I assumed compass fluid had to be reasonably safe and continued with the test card as planned. After I landed I was surprised that the MSDS for compass fluid (Soltrol) warns about dizziness after prolonged inhalation and suggests wearing a respirator during compass servicing. I have never seen someone wear a respirator while servicing a compass, but I was fascinated by the idea that a chemical naturally found in a confined cockpit could impair the pilot. 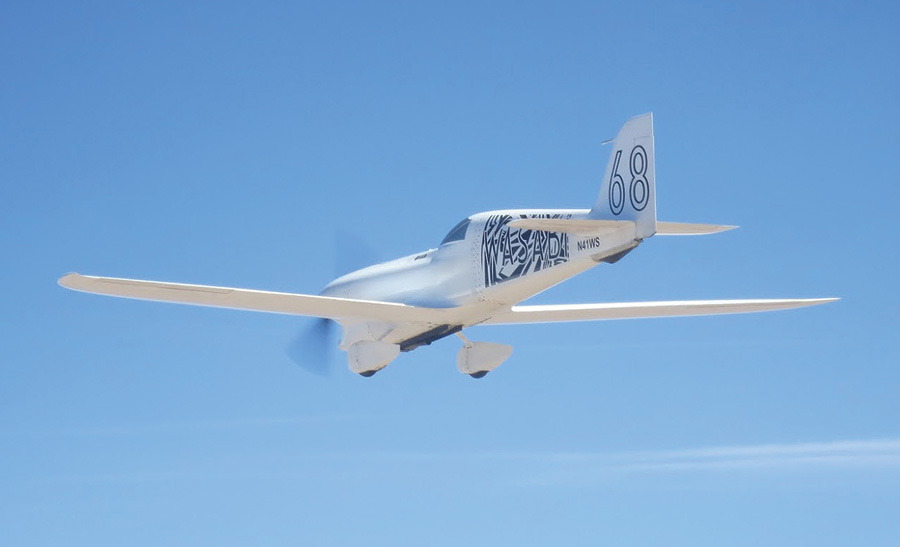 The Wasabi Siren Formula One pylon racer’s first flight with the “wet wing” and associated systems for the nonstop record formation flight from Mojave, California, to Oshkosh, Wisconsin. Trapped in an airplane too heavy to land, with his shoes filled with gasoline, Elliot Seguin has a chance to reflect on 100LL as a chemical and the side effects of prolonged exposure. (Photo: Justin Gillen)

A year later I was preparing the Wasabi Siren, the racer Jennifer and I designed and built, to fly nonstop from Mojave to Oshkosh to set a record. For this mission we had “wet the wing” of the airplane, turning the original eight gallons of fuel required for a 10-minute pylon race into the 50-some gallons we needed to fly 1500 miles from Mojave to Oshkosh. We wanted to be able to convert the airplane back to a racer after Oshkosh, so we had built the carbon-fiber pedestal assembly that sits between the pilot’s legs to be removable. The pedestal held the transfer pumps, shut-off valves, and fuel cap for the new fuel tank. The seal around the base of the pedestal was made with a big square flange that bolted tight against the wing via a paper gasket and Permatex #2 non-hardening fuel-tank sealant. After pressurizing the tank with shop air, I found the leak rate to be acceptable, so I filled the tank with fuel for the first envelope-expansion flight (20 gallons) and went home for the night. The morning’s flight would be the first for the new fuel system and the new Craig Catto cruise propeller.

The plan was to take off as a two-ship, with Wasabi Test Pilot Justin Gillen providing chase in the Tango Time Machine. I would climb to 10,000 feet burning the main fuel tank down to half full and then start transferring fuel (for the first time in flight) from the wing tank to the main tank. With 20 gallons in the wing tank, this would be a hundred-pound gross-weight expansion, and (planned at two hours) the longest flight in the history of the airplane. 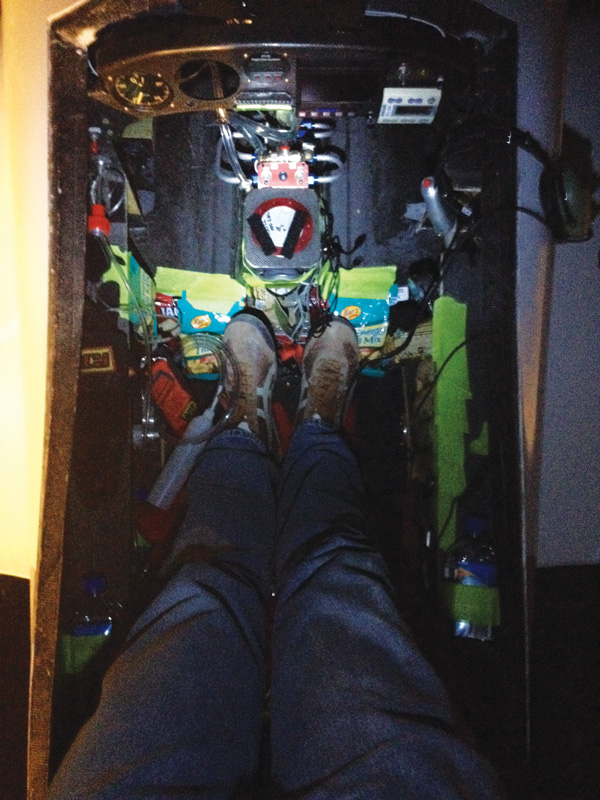 Standing in the seat of Wasabi, sitting on the runway three abreast at 4:00 in the morning ready to launch for AirVenture. Notice the fuel pedestal is now epoxy bonded in place to prevent more leaks. The pilot’s snacks, power gels, and water bottle can be seen secured with masking tape (that was later used to seal the cold cabin). The only relief tube in pylon racing is also visible.

I broke ground, established initial climb attitude, and could swear something hit me in the ankle. I was focused on the propeller and the engine, so I ignored the sensation. After climbing for a minute or two, the cylinder temps were starting to come up, so I lowered the nose to a cruise-climb attitude. As I did so, I noticed the ankle sensation again. I pulled my foot off the rudder pedal and reached down with my left hand to touch my ankle. I smelled my hand and discovered my sock was soaked in gasoline. As the fuel was moving around in the new wing tank, it would slosh forward against the bolted flange that was supposed to be sealed.

Unfortunately the Permatex in the joint had become significantly compromised sitting in fuel overnight. The sloshing was creating little jets of fuel, which squirted through the bolted flange, hitting me in the back of the ankle with noticeable force. It surprised me to find that Permatex #2 is gasoline soluble (cured or not, we tried several batches), and sitting in contact with the fuel overnight, the seal had become significantly compromised. It took me a lot of testing in two airplanes to believe that a product described as a fuel tank sealant was fuel soluble, so I pass that on now to save you the trouble.

On that particular day, in a decision that I am not proud of, I decided (like I had in Danno’s Long-EZ) not to perform an immediate precautionary landing. Instead I finished the test card, the justification being that I had not planned for the extra hundred pounds on landing. I finished the climb to 10,000 feet and lowered the nose to cruise attitude. As the nose came down to the lowest attitude of the day, I could feel the gas, now in constant contact with the forward seal, running down my ankles and into my shoes. The plan had been to burn the main tank to 50% and then try transferring fuel. I had not yet burned the four gallons required to be at 50% fuel, but I decided the fuel in the cockpit was worth accelerating the schedule. I selected both transfer pumps on, opened the transfer valve, and watched the main tank fuel level rise. As it rose, Justin and I talked about the problem on mission frequency. He suggested that using the transfer pump to overfill the main tank would push the fuel overboard through the vent line. This would get rid of the extra weight faster than burning it. With this test complete, I landed.

Back on the ground, I checked the MSDS for low-lead aviation gas and was surprised to find out just how dangerous prolonged contact with the stuff is. Particularly scary was the risk of central nervous system depression, which can slow the heart rate and breathing up to and including a coma, not to mention the obvious fire risk.

A year later, when I started flying Lynn Farnsworth’s Race 44, I initially operated it much like a stock Legacy. But after 20 hours of engine break-in, Andy Chiavetta, the designer of the Super Legacy, and I installed the ADI (anti-detonation injection) and spray bar systems in the airplane to begin high-horsepower testing. This custom system consists of a two-chamber tank that sits next to the pilot in the cockpit. The two chambers contain spray water (for cooling the outside of the cylinders) and a blend of water and methanol for ADI (cooling the inside of the cylinders). The tank includes the pumps for the two systems, and from those pumps plumbing carries the fluids forward through the firewall and into the engine compartment. My first flight with the system was also my first with race gas and over 600 horsepower, so there was a lot of personal envelope expansion planned. 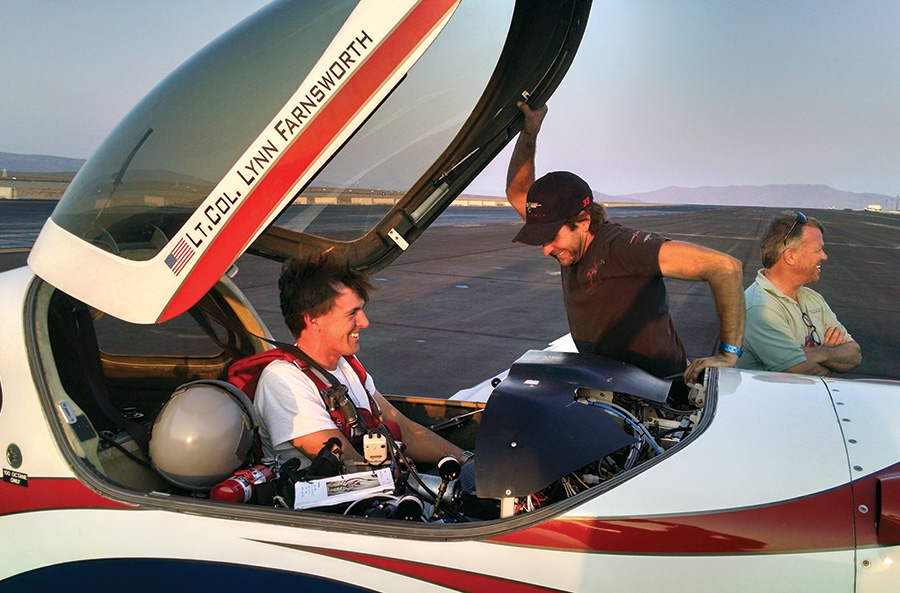 Elliot Seguin and Aerochia founder Andy Chiavetta debrief a test flight at Reno 2014, while Klaus Savier provides moral support. The ADI tank sits in the right seat of the Super Legacy. The tank’s vent that failed on the test flight is under the pilot’s helmet in the photo and can be seen weaving over the seatback to a high point in the baggage area.

After getting airborne and retracting the landing gear, I smelled something strange in the cockpit. With the airplane stabilized in the climb, I looked to my right at the ADI tank, and there was a 12-inch-tall column of liquid coming out the combined system vent at the back of the tank. The tube that routed the vent overboard had popped off when the fluid sloshed to the back of the tank during takeoff acceleration. The column of clear liquid was bouncing off the canopy, soaking through my flight suit. The smell I had detected was the methanol in the water solution, which was now on the skin of my right arm. It was at this moment that I remembered that methanol was poisonous, at best causing blindness and at worst death. As I brought the airplane around for a precautionary landing, I tried to decide if I needed to drink the stuff to be poisoned or whether skin contact was enough. After I landed, I checked the MSDS. It turns out that absorbed through the skin, the symptoms are very similar to swallowing the chemical, with about 10 ml causing blindness.

I never thought that exposure to toxic chemicals would be a significant part of being a test pilot. But once you consider that the first job of a pilot is to fly the airplane, symptoms like dizziness and loss of consciousness become obvious threats to the primary mission.

The thing that makes flight test interesting is the never-ending possibilities that come with the unknown. As testers it is good practice to “stack the deck” by preparing well for all of the known threats. Now I know that known threats include the chemicals that are on the test vehicle, especially the ones in the cockpit. This is good work that we do—cold and unforgiving, but good. 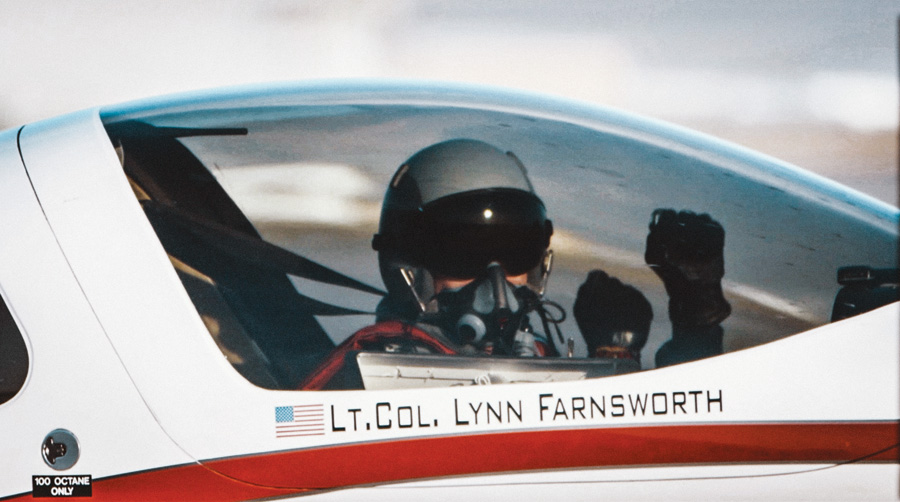 Elliot Seguin taxies Lynn Farnsworth’s Aerochia Super Legacy out for the fastest piston-powered time-to-climb in the record books. The white object in between the pilot and the canopy is an instrumentation rack that is sitting on the ADI tank that leaked methanol. (Photo: Zac Adams)

Vic Syracuse - July 31, 2019
0
Rubber isolator mounts should not have a gap between them and the engine mount when properly torqued.