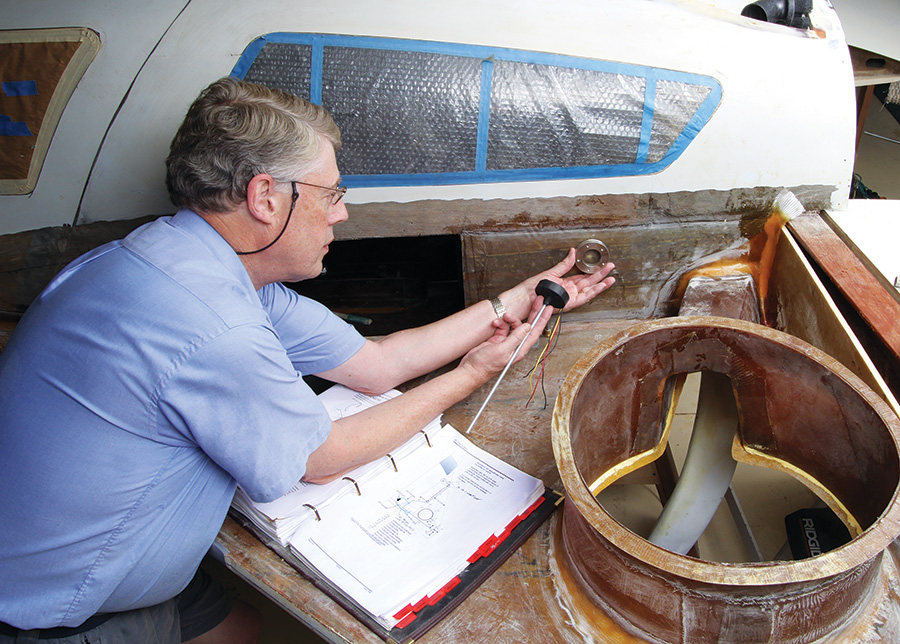 Phil Hooper contemplating the installation of the capacitance fuel-level sensor and baffles.

On a quiet street along a lush greenbelt in suburban Southern California resides Phil Hooper, Velocity builder. Things are really buzzing with his project. Phil and build-buddy Robert Rice have the landing gear working, the main wings on, and the tank baffles constructed. They’re almost ready to finish the pilot-side fuel tank by bonding the top of the strake airfoil in place. Once that’s done, they’ll have turned a maze of glass and resin into a ready-for-action wet wing. There is one small, but essential, detail before the fuel tank is permanently closed, and that is mounting the fuel-level sensor so the probe is properly aligned in the tank.

Phil’s choice for the sensor (one in each tank) is a capacitance-type made by Centroid Products. On the Velocity, the sensor head mounts on the inboard wall of the tank/fuselage with the probe angling down toward the fuel pickup point. 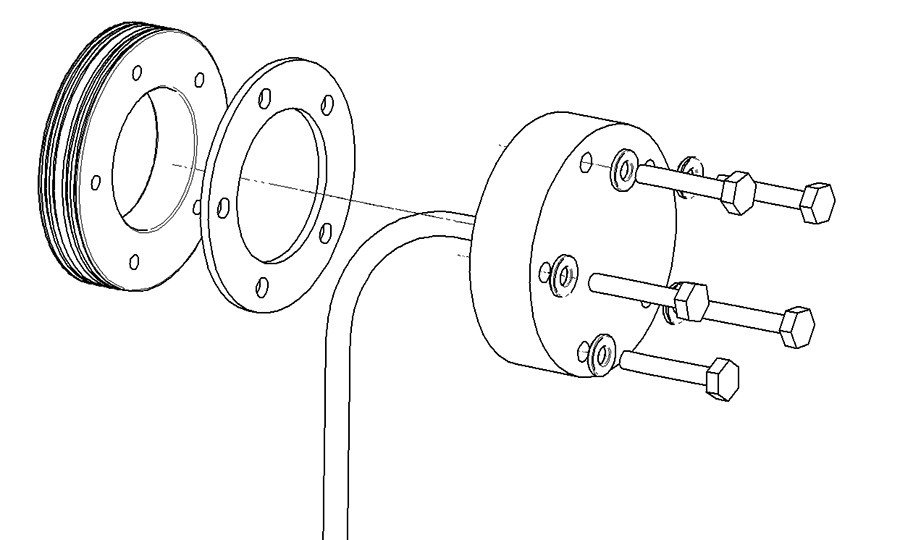 Exploded view of the mount, gasket, and fuel-level sensor.

According to Hooper, some Velocity builders permanently bond the fuel sensor in place. But this sacrifices service options—short of cutting the unit out—should it go south. The other way, and the one Phil selected after researching various Velocity-builder blogs (in particular, Geoff Gerhard’s), is to bolt the sending unit to an aluminum hardpoint. This hardpoint can be almost any shape: round, square, hex, etc.; the only requirements are a hole for the capacitance probe and that it doesn’t leak. The details driving the design choices are: the inboard wall of the tank/fuselage skin is a glass-foam-glass sandwich about 6/10-inch thick, the fuel sensor head is 2.6 inches in diameter, and it mounts with five AN3 (10-32) bolts. All these add up to confirm the Gerhard design: an aluminum ring about 2¾ inches in diameter by ½- inch thick. To prevent the possibility of fuel leaking through the mounting, the holes aren’t drilled through. Instead, they are bottom-tapped blind holes. 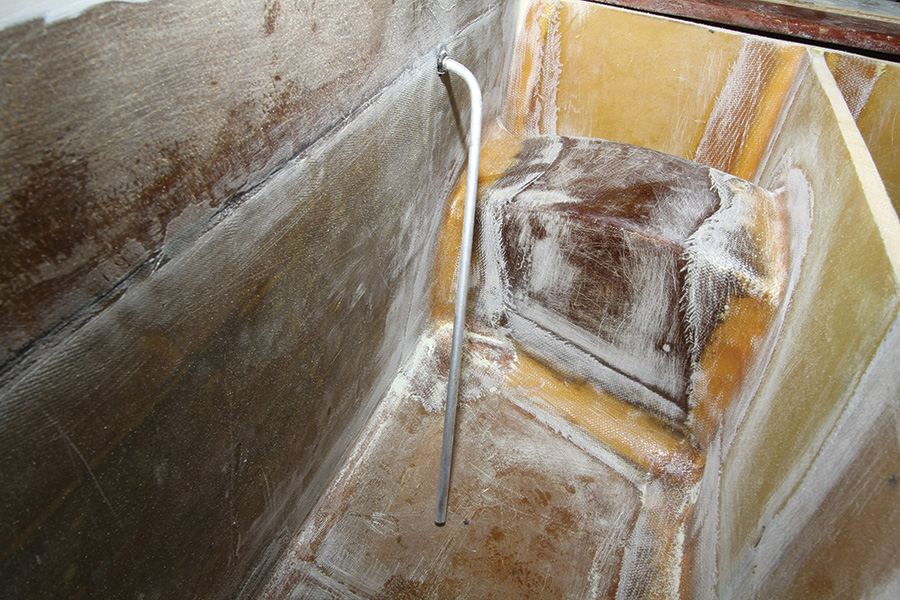 The head mounts to the side of the tank in the Velocity, so the probe must be bent to aim it toward the low point of the tank. Some probes are bendable, some not! 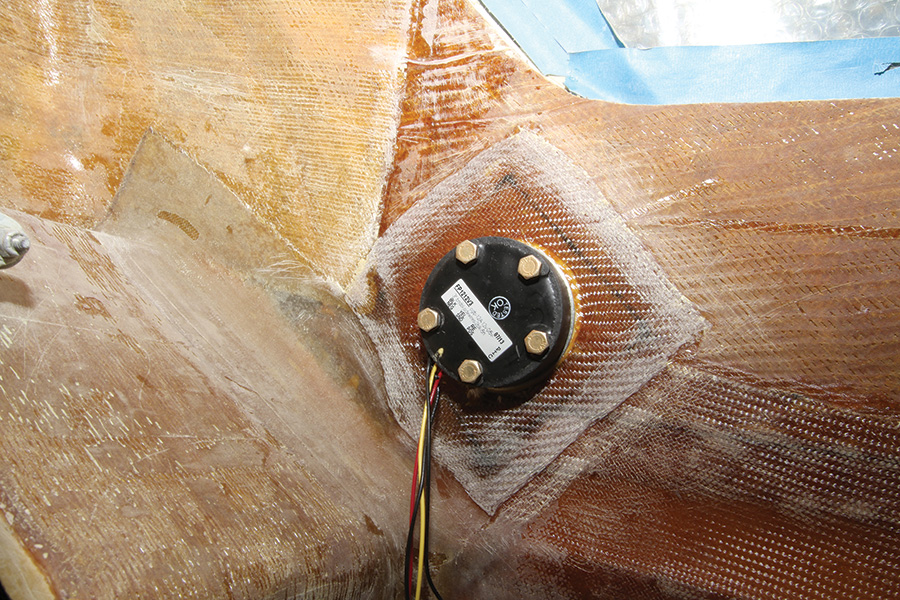 I made a confirming sample on the lathe out of some 2¾-inch round aluminum bar stock that was left over from another project. First, I faced the blank flat on both sides. Then I bored the inside to 11/2 inches in diameter. The next step was to face cut the mount to the final thickness of 1/2 inch. Finally, I used a deburring tool to smooth the inside edges.

After shaping, I was ready to drill the first hole for mounting the fuel level sensor. I carefully centered the sensor over the ring and marked the hole. Because the probe that is attached to the sensor is 12 inches long, I had to find a way to support the ring and sensor without bending the probe. The gap between the ways of my wood lathe and a couple of wood blocks that were left over from a prop-carving project did the trick. 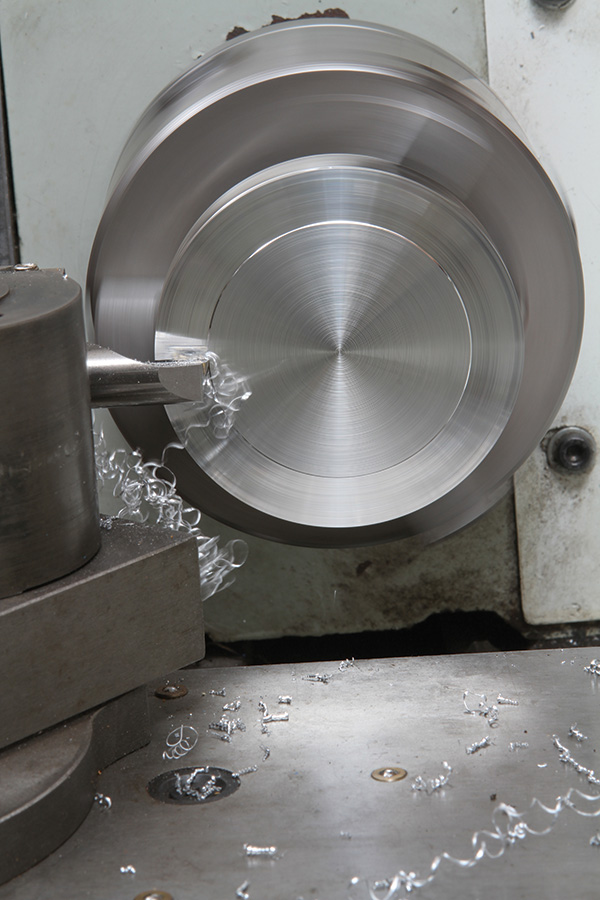 Face the blank flat on both sides. 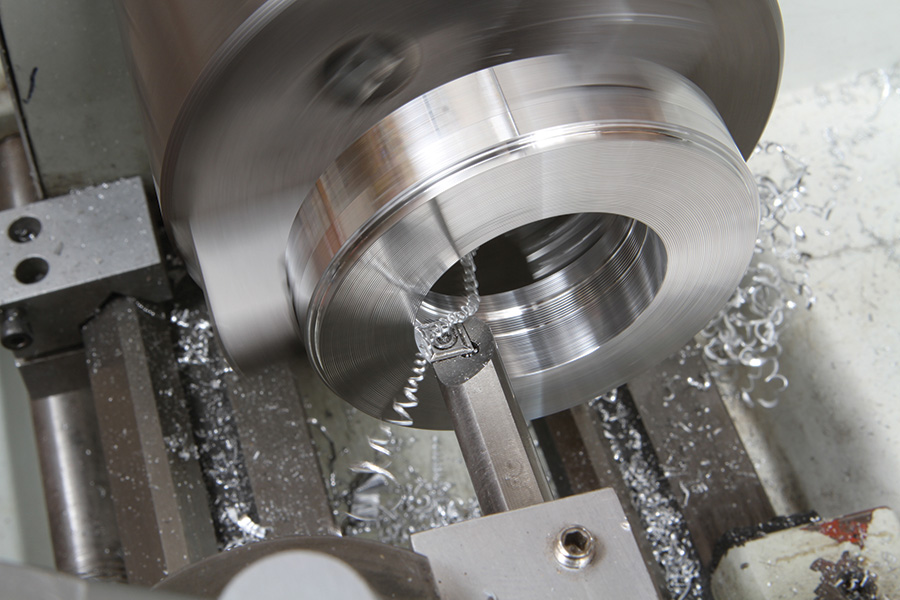 Bore inside to 1½ inches in diameter. 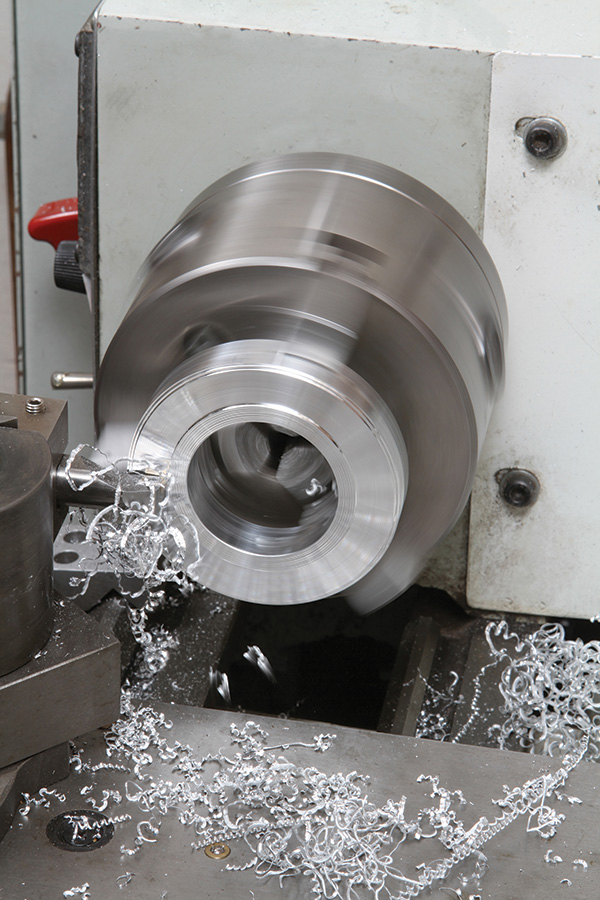 Face cut to the final thickness of ½ inch. 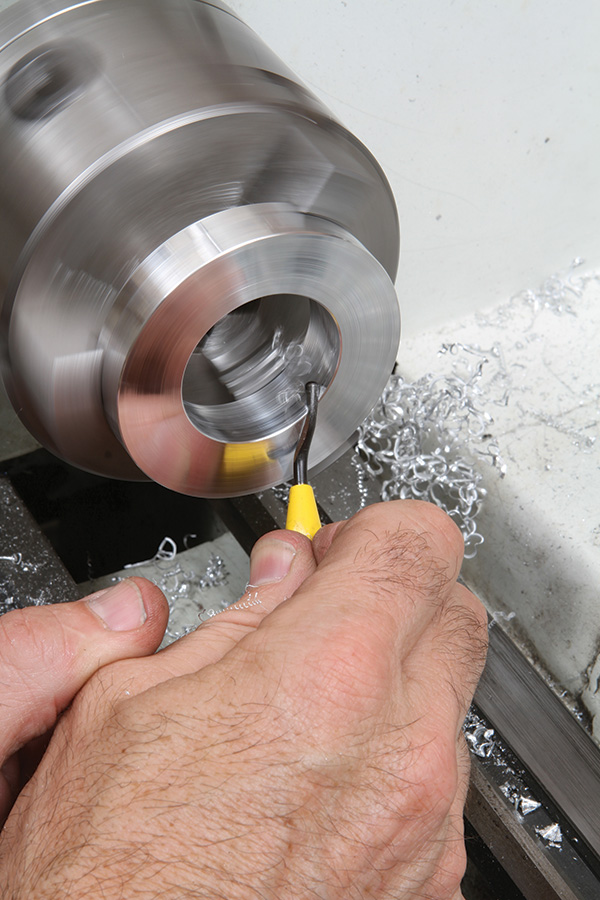 Use a deburring tool to smooth the inside edges. 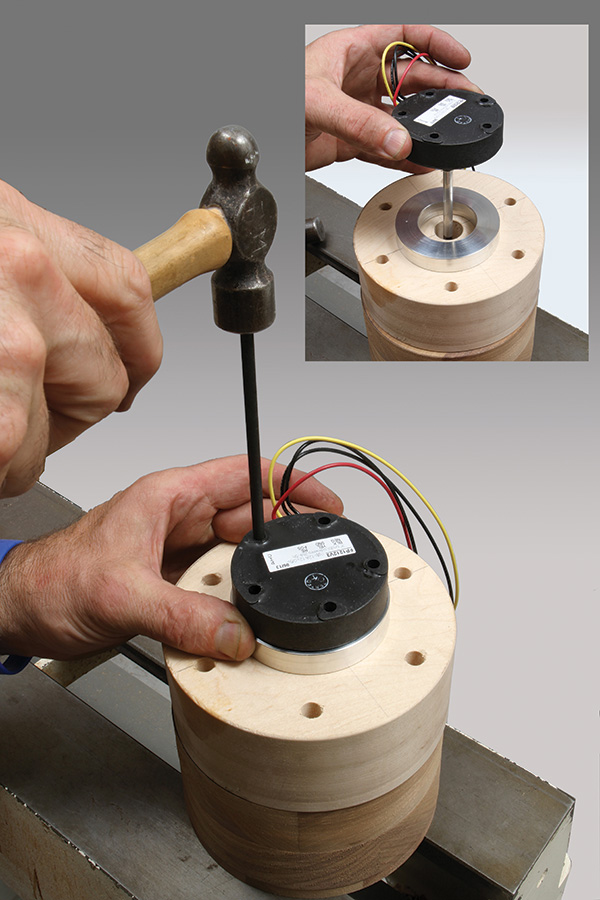 Carefully center the ring and mark the first hole. The probe tube is 12 inches long, so a suitable support is needed. 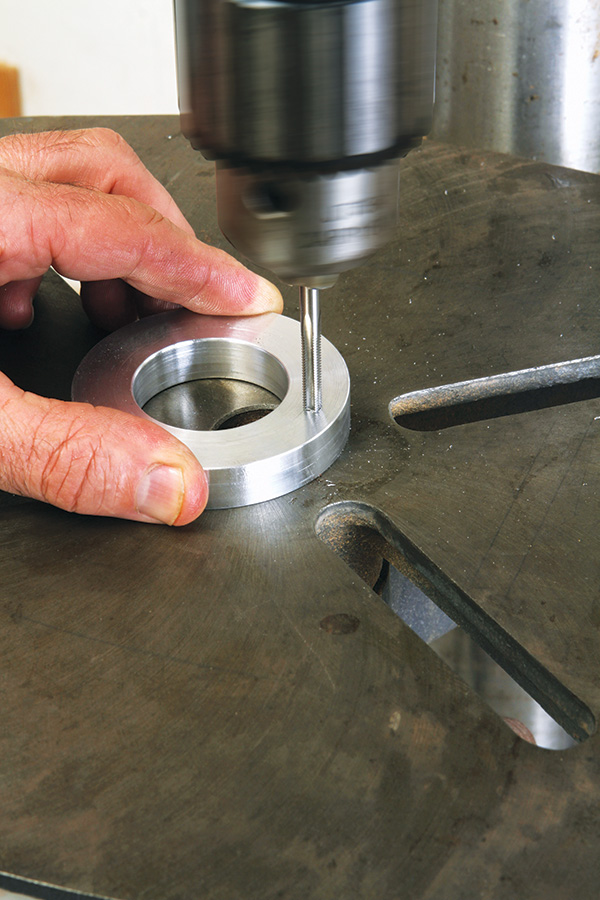 Drill and then tap with a plug tap. The tap should be just “snugged” in the drill chuck, so it will slip after two or three revolutions. 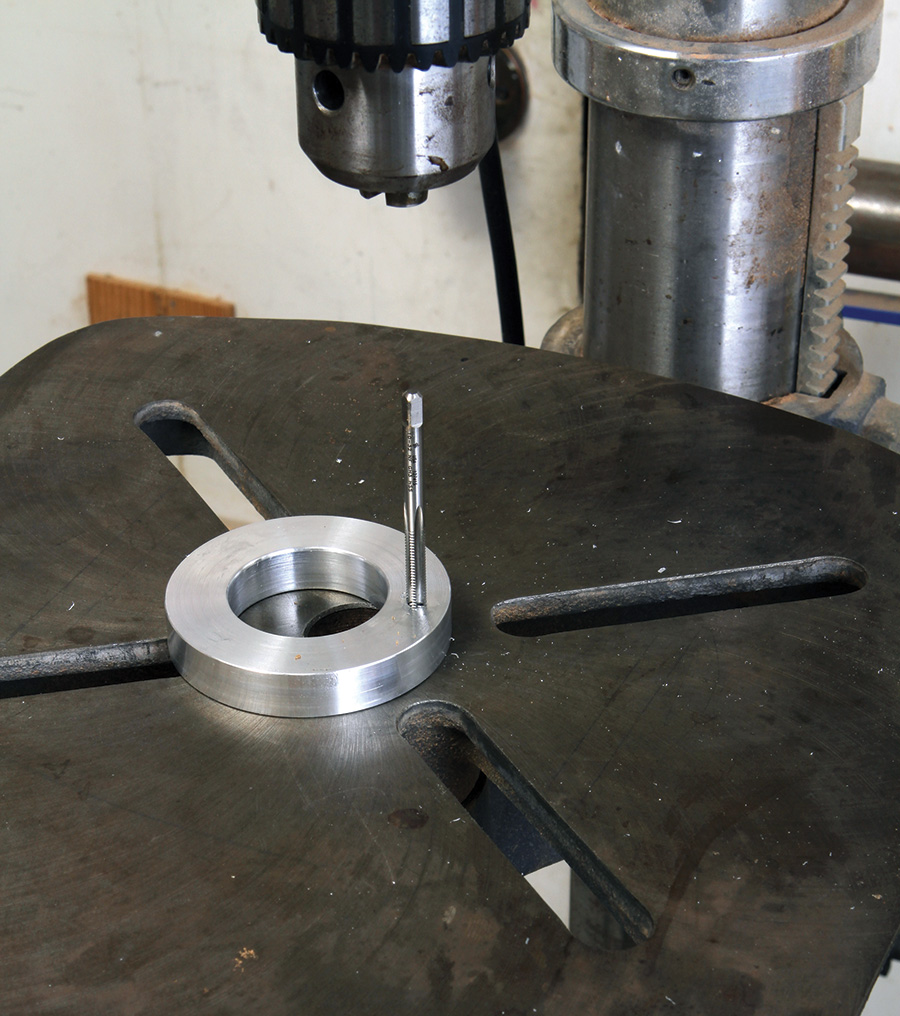 Loosen the chuck and finish tapping to the depth of the blind hole by hand. 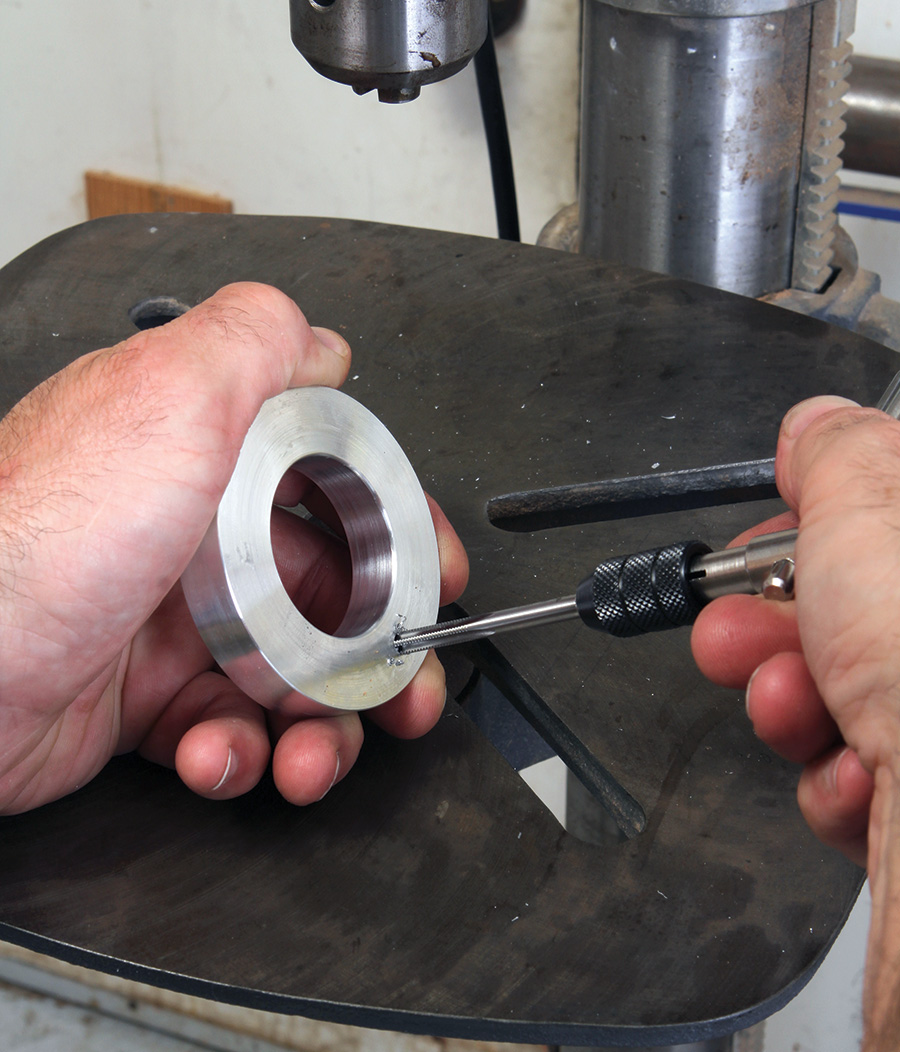 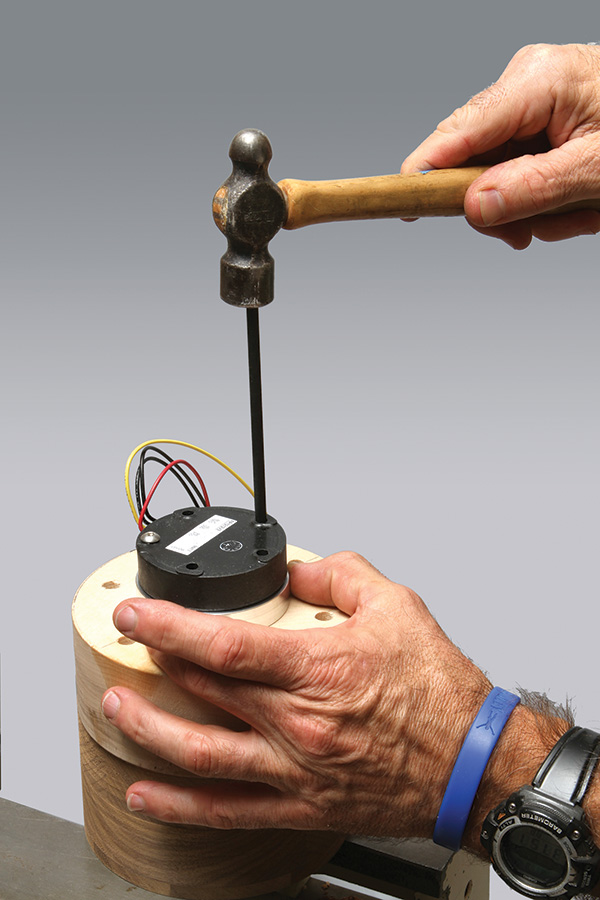 When you have two bolts to secure alignment, mark the final three holes for drilling and tapping. 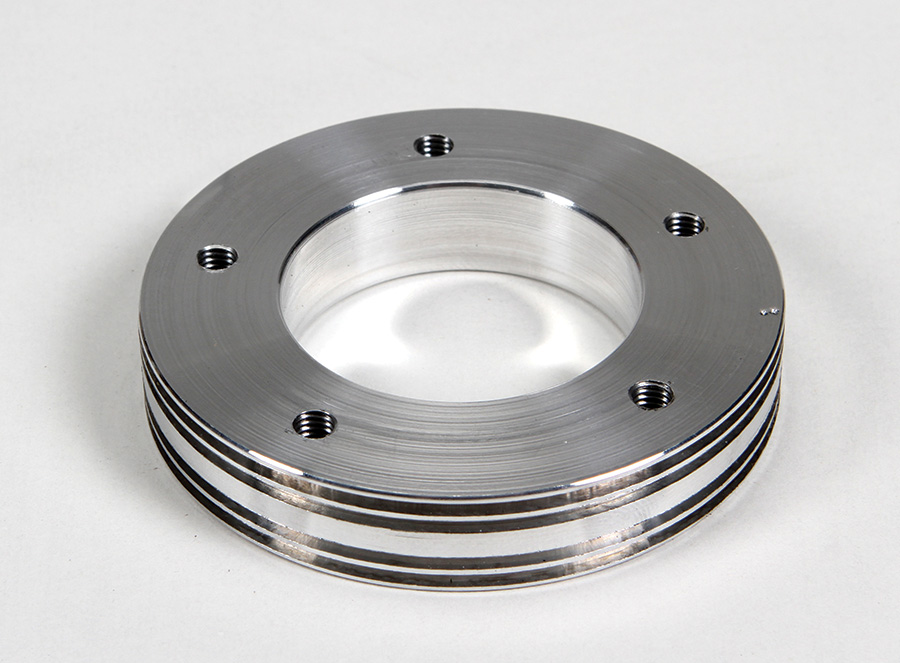 The grooves around the outside provide additional surface area for bonding. They were cut with a parting tool plunged to 1/10-inch depth. Since the hole-pattern is not symmetrical, two small punch marks (right side of ring) indicate where the wires in the sensor line up.

Tips for Tapping Straight and True

After drilling the hole to 4/10-inch depth on the drill press, I used a technique that I learned years ago from an old-school machinist. You might call it “poor man’s power-tapping.” Chuck a plug tap (preferably a sharp one) in the drill press, but only hand tight. Do not use the key to tighten! Flip the switch on, then off, and let the machine coast to about 50 to 100 rpm. Just before momentum dies completely, feed the tap into the hole. If everything is right, the tap will enter the part and self-feed for two or three threads. As the cutting forces build up, the tap will slip in the chuck and stop cutting. The tap is, in effect, self-clutching in the chuck. Hold the part steady until the chuck stops (usually a second or two). Then loosen the chuck to release the tap and finish tapping the hole by hand. As long as the tap is not too tight in the chuck, there’s no danger of it breaking (dread that!). If it’s too loose, nothing bad happens; the tap will just slip in the chuck without forming any threads. Tighten a little tighter and try again. The shank of a tap is hardened and won’t be damaged by this technique.

Finishing the Threads with a Bottoming Tap

When I mentioned to Phil that the threads were finished with a bottoming tap, he said, “Great!” Then, after an inquisitive pause, he added, “What’s a bottoming tap?”

Though Phil has an extensive tap and die collection, including hand-me-downs from his father that are at least 50 years old, he had never heard of a bottoming tap. It makes sense. Standard tap and die assortments come with plug taps, where the first three to six threads are tapered, so after a few turns the tap has enough traction to start cutting a full thread without the risk of pulling out or stripping. Plug taps are everyday taps, but you can’t use them to make fully formed threads near the bottom of a blind hole. To do that, you need a bottoming tap. Bottoming taps have an ever-so-slight taper to help get the tap started, but it’s only for one or two threads. Generally, bottoming taps should be used after a plug tap and only to finish tapping the last few threads at the bottom of a blind hole.

There is yet another style tap called a taper tap. These are used for threading tough steels. The long taper reduces the stress on the tap. Refer to the cross-section photo for a comparison of the different depths. You’ll notice it takes about eight turns for a taper tap to cut a fully formed thread. 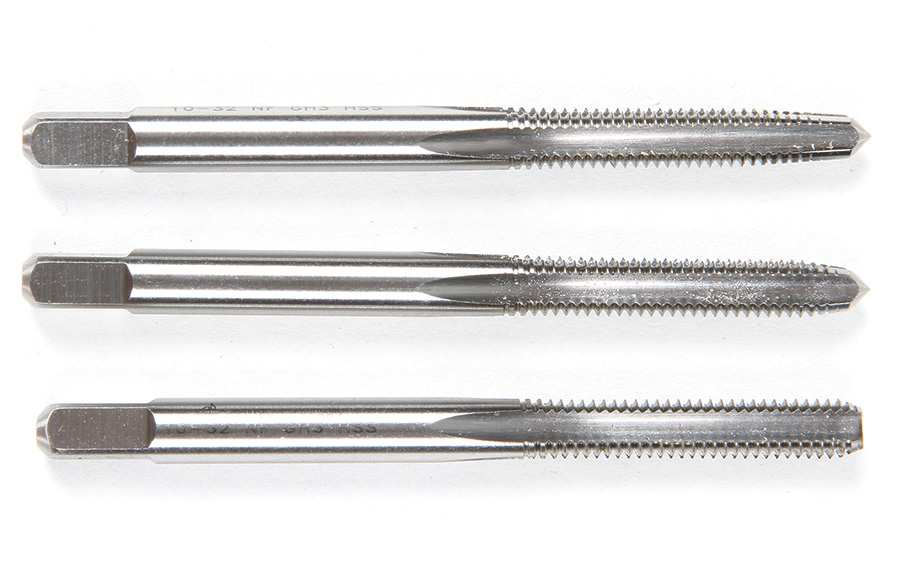 A tap set consisting of (top to bottom) taper, plug, and bottoming taps.

Four holes drilled to 0.4-inch deep and the three tapped 10-32 with (left to right) taper, plug, and bottoming taps. The red lines indicate the deepest fully-formed thread for each style tap.

With the first hole drilled and tapped, bolt the fuel level sensor to the ring and mark the second hole for drilling and tapping. When you have two bolts to secure alignment, mark the final three holes for drilling and tapping. With all five holes drilled and tapped, Phil suggested adding some grooves around the outside of the ring for additional surface area to improve the bonding (which was done with Jeffco epoxy and Cab-O-Sil).

Capacitance sensors have no moving parts. They consist of two conductors, usually metal plates of some form, separated by an insulator.

Fuel level senders for aircraft, like the one featured in this article, have a probe consisting of a small aluminum rod suspended inside an aluminum tube. The level is sensed based on the difference in the capacitance of air (empty) versus gasoline (full), or whatever combination when the tank is somewhere between empty and full.

This difference in capacitance, and the linear nature of the sensor, makes it easy to calibrate the system for virtually any size and shape fuel tank. The electronics imbedded in the mounting head of the unit do all the work to convert the capacitance measurement into an analog signal for output to the fuel gauge or multi-function display.

Thanks to Phil Hooper and Robert Rice for letting me help on their fun project.