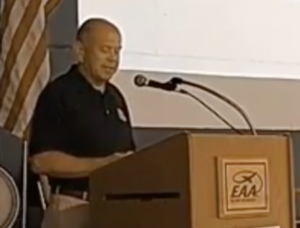 The FAA administrator comes to EAA AirVenture just about every summer, and as a rule the main thrust of the current officeholder’s speech is pretty predictable–whoever is in the job will talk about how great GA is and how much they support it, but how hard and slow it is to change any of the rules and regs that frustrate pilots and aircraft owners. This year, FAA Administrator Michael Huerta had the lucky opportunity to tout actual progress the agency has recently made toward giving GA something they dearly want — third-class medical reform — and even more. “We’re committed to making general aviation safer and more efficient and we’re making a lot of progress,” Administrator Michael Huerta told the Oshkosh crowd today. “Collaboration between the FAA and industry is allowing the GA community to benefit from upgraded technology, lower costs, and higher levels of safety.”

By working together, Huerta said, the FAA and industry are transforming general aviation in a number of ways: Besides the new third-class-medical rule, a proposed new Part 23 that aims to streamline aircraft certification is making progress, new airman certification standards have been put in place, and the approval process to install certain safety gear in GA aircraft has been simplified. Huerta cited the importance of collaboration between government and industry. “The passion that drives pilots to fly here, year after year, is the same passion that fuels so much of the work we do every day at the FAA,” he said.

“The United States has the largest and most diverse GA community in the world,” Huerta added, “with more than 220,000 aircraft – including amateur-built aircraft, rotorcraft, balloons and highly sophisticated turbojets. The FAA and GA community are working together to put the right technologies, regulations, and education initiatives in place to improve safety.” The full text of Huerta’s talk is posted on the FAA website.