Home Newsline News It’s About the Friends You Meet

I’ve written this once or twice in the past, but it’s worth repeating—the longer you go to Oshkosh, the less it becomes about airplanes, and the more it becomes about the people you meet. Sure, we all go for the airplanes, but honestly, after awhile, all of the RV’s begin to blend together, no matter how beautiful they are. But the people keep changing, and they keep coming.

And while its wonderful to meet new pilots and builders, it is always special to re-connect with old friends that you haven’t seen in a long time—especially those friends with which you’ve shared special adventures. I had the chance the other night to share the stage at the Theater in the Woods with a couple of those friends from my old profession, putting people in to space. In fact, I have helped launch both of those guys into space more than a couple of times each! 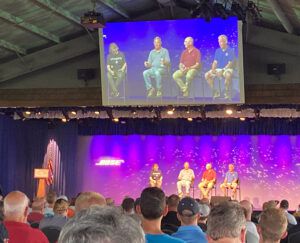 Astronauts Jim Voss and Steve Lindsey are both (like me) homebuilt airplane owners and pilots. They both flew into the big show this year from their home base near Denver, Jim in his Long-EZ, and Steve in his RV-7. Like me, they just love airplanes, and Oshkosh is the Mecca for any airplane nut. Yeah, they both flew in space five times, but walking through the hallowed grass of Wittman field is special in its own way.

We traded these thoughts, and remembrances of our days in the space program with a lot of laughter in the green room before taking a slightly (only slightly…) sanitized version of the same banter on stage for two hours. Time really does heal all wounds, and things that might have bothered us when they happened were sources of significant amusement when looked at through the lens of a decade.

Probably the greatest comment on the universality of the love of flying machines is that the original lineup for the night included a completely different set of astronauts, all of whom had to cancel nearly at the last minute due to personal or family health issues. But Experimental Aviation is a powerful attractor, and all it took was a few phone calls to find out which former astronauts had planes on the field proving once again that the love of flying machines knows no bounds in speed or altitude.

Fasteners Through an Engineer’s Eye

Barnaby Wainfan - August 21, 2013
0
The structure of an airplane and its systems are only as strong and reliable as the joints holding its components together.