Two weak points of auto-engine conversions for Experimental aircraft are the propeller speed reduction unit (PSRU) and the cooling system. Unfortunately, many builders have discovered this firsthand after investing thousands of dollars in a complete firewall-forward package that was supposed to have these systems fully developed. The basic engine was fine; the supporting systems were not.

Its bad enough when the components you paid for don’t work the way you expect, worse when the company fails to stand behind them with a useful warranty or upgrade concessions. Too often builders found themselves stuck with an unreliable package, and they had little recourse other than to junk it and start over.

People who cater to homebuilders are an inventive and resourceful bunch, and its not uncommon for a company to pick up where others have fallen short and develop solutions. For example, Maxwell Propulsion Systems took over the Subaru conversion from defunct NSI, and has increased reliability considerably. 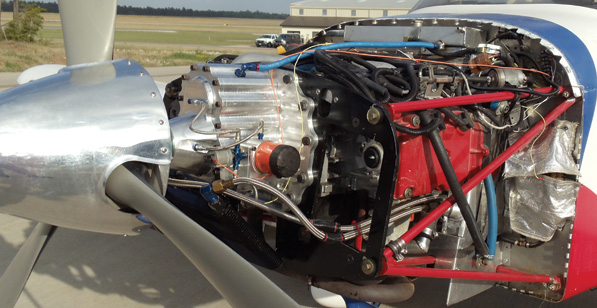 Geared Drives current PSRU for Subarus as installed on Larry Perrymans RV-7. This iteration was finalized after extensive in-flight testing of a billet prototype. Imagine that!

This Buds for You

Another company that has recently jumped into the fray to support Subaru conversions is Geared Drives of Conroe, Texas. Founder Bud Warren has an impressive resum that includes building and driving top-fuel dragsters, designing and building aerospace components for NASAs Gemini program, and earning his A&P license and aviation welding certification. Add more than 50 years of practical, hands-on experience revolving around building things that go fast safely, including restoring a neglected BT-13 to a Commemorative Air Force showpiece as his first airplane project in 1980.

In 1992, Warren was approached by a friend who wanted to use a Chevy V-6 in a Wheeler Express project. Fascinated by the concept, Warren investigated which PSRUs might work in this application. Dissatisfied with what he found, he ended up designing and building his own gear-based PSRU, and it worked well.

Warren later bought the Chevy-powered Wheeler, and used it to demo his PSRU and for transportation to aviation events around the country. However, an inflight engine fire due to a defective fuel line spraying a hot exhaust manifold resulted in a forced landing in a hayfield. Everyone exited the Wheeler fine, but the fire completely consumed the plane. Warren continued his PSRU work, resulting in the 300-horsepower Corvette LS-1 V-8 firewall-forward package intended for the Vans RV-10 market. 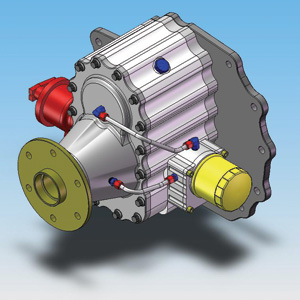 In its production form, the Geared PSRU provides a pad for a hydraulic prop governor.

Warren saw the need to scale down his design for the Subaru during a flight in Larry Perrymans RV-7 a couple of years ago. It was pretty surprising, Warren said. There was this thrumming noise, some vibration, and the engine was running really hot. I cant believe the number of guys who think that 220 to 240 [coolant temp] is normal. It didn’t take long for me to decide that I could do this better.

Using the same design technology found in his larger units, he soon had a prototype PSRU and an improved cooling system on Perrymans RV. It was pretty obvious those tiny, front-mounted radiators had to go, Warren said. There’s just not enough coolant or surface area for the engine. We installed one of our three-pass radiators at the rear and got the temperature back where it belongs.

Granted, the prototype Subaru PSRU as it was displayed at the 2009 Sun n Fun fly-in was hardly a thing of beauty. In fact, it looked simply like a metal box sitting in the nose of cowling. But beauty is only skin deep, and the attractiveness of the unit was proven with each new flight. The weird noises were gone, along with the vibration, and the other Geared Drives innovations iced the cake.

The biggest difference among all of Warrens designs and other gear-based units is a centrifugal clutch that decouples the engine from the PSRU at idle speeds. This allows the engine to be started without the additional loads and back pulses from the prop, much like a turboprop. At speeds above 700 rpm or so, the clutch starts to engage and the propeller slowly comes up to speed. The faster the engine turns, the firmer the clutchs grip.

Unlike an auto clutch, the Geared Drives unit typically has only a few cycles per flight, so wear is minimal. After several hundred hours we measured clutch wear, and it was only four thousandths, Warren said. So there’s no recommended maintenance interval on the clutch.

Another advantage of the clutch is the smoothing of propeller-induced pulses that feed back through the PSRU gears during startup and shutdown. This can frequently be heard in other designs, when shutting the engine down sounds much like a spoon caught in a garbage disposal. There is no such noise from the Geared Drive units; the engine shuts down automotive style, followed by the propeller winding down in short order.

Each Geared Drives PSRU also comes equipped with its own oil pump and filter system, making it perfectly suitable for a constant-speed prop. Four straight-cut spur gears turn on roller bearings, with the exception of the propeller shaft, which uses a tapered roller bearing to handle thrust loads. Gear ratios are user selectable, but Warren advises against the pilots tackling changing them. They can do it if theyve got the skill, but Id prefer they send it back to me, he said. Gear sets can be replaced without removing the PSRU from the Subaru engine.

Retrofitting the Geared Drive unit to an Eggenfellner Subaru conversion was an important consideration in its design, and Warren has attempted to maintain it as straightforward as possible. Dimensionally speaking, it matches the

Generation 3 gearboxes. The weight is about the same, too, Warren said, but our flywheel is 2 pounds less. Because there is zero offset between the engines crankshaft and propeller hub, cowling and nosebowl modifications should also be minor, if necessary at all. As mentioned, the added benefit is that the PSRU can run a conventional hydraulic constant-speed prop; the Eggenfellner installations must use an electric prop. Cost of the PSRU alone is $5995. 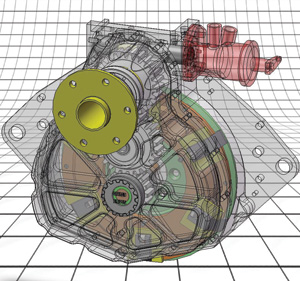 A cutaway view of the reduction unit for V-8 engines shows how the prop shaft is offset to allow for the crankshaft of the engine to be ideally situated in the airframe.

From Subie to Chevy

Bill Gipson is an RV-10 builder, who also happens to be based in Conroe. He initially purchased a 220-hp, turbocharged Eggenfellner engine to power his project, but it wasn’t long until Warren heard about it and made Gipson an offer he couldn’t refuse.

He came over to the hangar one day, and ended up convincing me that I should put one of his LS-1 packages on instead, Gipson said. It turned out he was right. Gipson hadn’t even started the Subaru at that point, but decided the promise of 30% more horsepower would be well worth it. Besides, Warren would be right there to oversee the installation and help work out any bugs.

It really made sense to go with the LS-1, Gipson said. Otherwise, Id be running the Subaru flat out most of the time. It was a pretty easy installation; it wasn’t a lot of trouble. This engine is much simpler and has much more power.

The initial flight testing wasn’t without a few difficulties, however. A long downwind taxi during a very hot day caused the engine to overheat during initial climbout. The LS-1 went into limp home mode at around 600 feet AGL, and only partial power was available. The return to the airport was OK, but the hard landing necessitated landing-gear repairs.

Once the cooling system was sorted out and the airplane was flying again, another mishap on the way to the 2010 Sun n Fun convention prevented Gipson from making the show. I can only describe it as a bonehead landing, Gipson said. I had a heavy airplane. I just didn’t keep the speed up and dropped it in. There was a silver lining. Gipson and Warren used the opportunity to improve the gear mounting, beefing up its resilience for the occasional firmer-than-normal arrival. 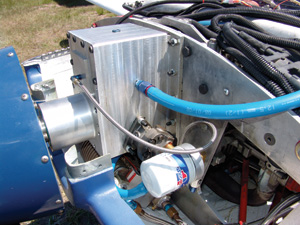 The original drive was tested and proven before a final casting was developed.

You might expect that the change from Subaru to Chevy powerplants would require a significant amount of airframe adjustment to handle the weight differences. Not so, says Gipson. The LS-1 package actually weighs less than the Subaru. The Subaru is well over 500 pounds with the turbo and intercooler, and the LS-1 is 488 with everything.

Gipson has fewer than 100 hours on his RV-10 at this writing, but hes still managed to gather a few real-world performance figures. Originally equipped with a three-blade scimitar prop from Hartzell, Gipsons RV turned in a cruise speed of 184 knots at 6000 feet with a manifold pressure of 26 inches. His Grand Rapids EIS indicated a fuel burn of only 11.4 gph at that power setting. I couldve pushed it much harder, says Gipson, but I would have exceeded Vne pretty quickly.

The Hartzell put some weight on the nose, and Gipson has since swapped it for a lighter prop from MT. It handles much better now, Gipson said. It used to require full nose-up trim on landing, and now I can leave it neutral for most everything. He hasnt yet compiled performance data with the MT.

When asked to describe the Geared Drives engine and PSRU package, Gipson said flawless, in spite of the few setbacks along the way. He spent just over $40,000 for his first engine package, and feels the additional investment in the LS-1 package was well worth it. And there’s another reason, Gipson said. Buds just such a great guy to work with. Sometimes the home field advantage goes a long, long way. 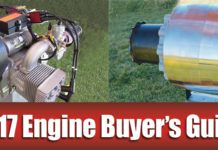 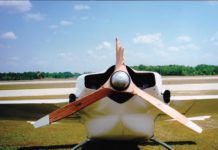 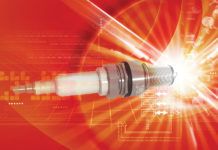 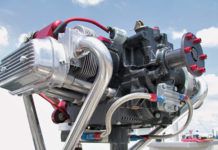 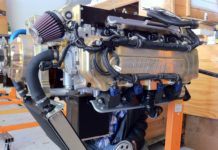 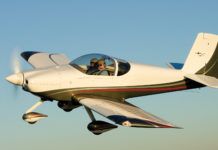 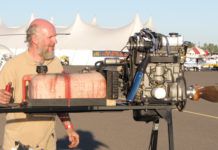 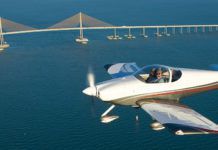 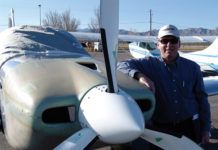 Kitplanes - August 7, 2020
0
Just three months into our yearlong 25th Anniversary year, we had a thoroughly reworked...