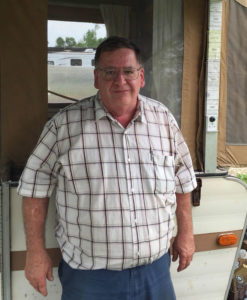 I met a super example of a loyal EAA Fly-in fan in Camp Scholler yesterday. His name is Paul Laster and he hails from Cincinnati, Ohio. Paul got interested in aviation through the Air Explorer club Post 171 while attending high school in Chicago. He then worked on his A&P license at the Alabama Technical college, graduating in 1978. Unfortunately, there were lots of experienced mechanics from the Vietnam war that were available, so Paul ended up being a mechanic for Procter & Gamble’s Soap Division. But the real story that amazed me is that this is his 49 consecutive EAA Fly-in!

I can’t call them AirVenture because he has been attending way longer than it has been called AirVenture, having attended all 47 at OSH and the last 2 that were held at Rockford. And Paul doesn’t even fly! His brother-in-law flies for American Airlines and his brother-in-law’s son is an F-18 pilot in the Navy, and they both have Bonanzas in which Paul does get to go flying.

Paul says the attraction is that OSH is such a nice place to relax that he stays for the entire show. He certainly has some stories to share, including the claim of seeing a Breezy do a low level loop one year.

Oh, and his camper you see behind him–it is 43 years old as well!

Dean Sigler - March 20, 2012
0
Dean Sigler checks in on the Green Flight Challengers of 2011 who didn’t make it to the competition to see what they’re up to now.