One of the primary tasks a pilot must be able to accomplish is controlling the pitch attitude and airspeed of the airplane. Longitudinal flying qualities are important to the safety and controllability of the airplane.

Some years ago (2007), Wind Tunnel looked at the problem of overly sensitive pitch characteristics that were a subject of much concern for several popular high-performance kit airplanes at the time. The overall conclusion reached at the time was that the problems stemmed from the combination of too-small horizontal tails and mass properties that allowed the CG to move aft far enough that the airplanes had nearly neutral pitch stability.

Figure 1 shows the pitching-moment curve of an ideally linear airplane. The plot of pitching moment vs. angle of attack is a straight line. The slope is negative (pitching moment moves nose-down as angle of attack increases), indicating the airplane is stable. The airplane is in trim at the angle of attack where the pitching moment is zero. The figure shows three lines for a hypothetical airplane. The middle line is with neutral elevator. The upper line is for up elevator deflection, while the lower line is with down elevator. Deflecting the elevators moves the whole curve up or down to trim at different angles of attack, but the slope (and hence stability) does not change with elevator deflection. 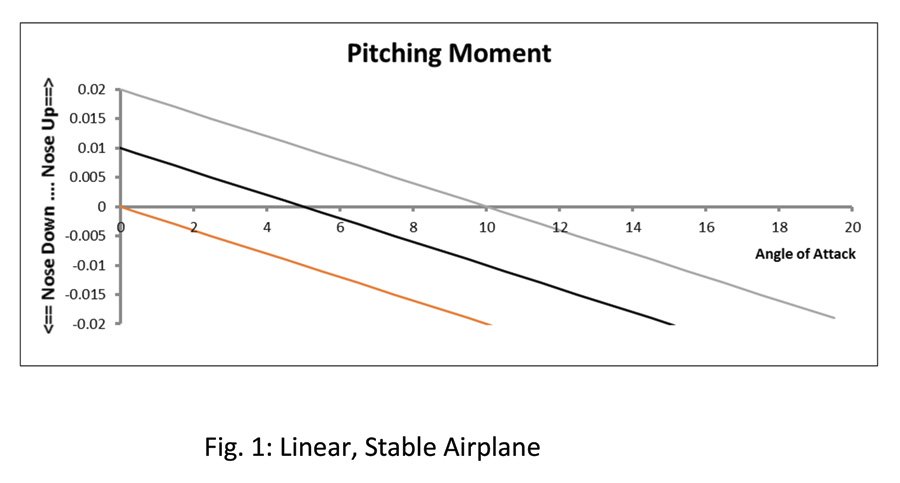 While it is ideal to have a linear variation of pitching moment over the entire range of possible angles of attack, real airplanes seldom, if ever, achieve this. There are many reasons for nonlinear pitch behavior, but the two most common are the effects of flow separation on the forces generated by the airplane’s flying surfaces, and the vertical position of the center of gravity. Space does not permit a detailed discussion of either in this article, so we will concentrate on the pitching moment behavior itself, and its implications for the safety and flying qualities of the airplane.

Above a certain angle of attack, the airflow over the airplane starts to separate. On a conventional airplane the first flow separation is usually the beginning of wing stall. The flow separation causes changes in the air pressure acting on the flying surfaces, and these pressure changes in turn change the pitching moment. On a well-behaved airplane the initial loss of lift is forward, and the first effect of the onset of stall is a nose-down change in pitching moment.

This characteristic is illustrated in Figure 2. For the airplane in this example, the nose-down pitching moment break starts at about 10 degrees AOA. Above this angle of attack the airplane has a much steeper, stable, slope to the pitching moment curve and tends to resist being forced to higher angles of attack.

This is a safe and desirable characteristic. A nose-down pitching moment break at or slightly before the stall causes the airplane to try to self-recover from the stall. The strongly stable slope at higher angles of attack means that the airplane will nose down quickly as soon as the back stick pressure that forced the airplane into the stall is relaxed.

For a conventional aft-tail airplane, the pitch-down typically happens due to the onset of the stall of the main wing, so it does not prevent the pilot from being able to stall the airplane.

On a properly designed canard airplane, the foreplane stalls before the main wing. This causes the pitching moment to break nose-down at an angle of attack below where the main (aft) wing stalls. This self-limiting characteristic, which makes it difficult or impossible for the pilot to command enough angle of attack to truly stall the airplane, is one of the primary advantages of the canard configuration.

While desirable, this advantage of canards is a little bit of a mixed blessing since the AOA-limiting characteristic just described also keeps the pilot from being able to use all of the maximum lift capability of the wing. Accordingly, for a given wing loading, a canard airplane will have a higher minimum trimmed airspeed, and a higher approach and landing speed than an aft-tail airplane. The trade between self-limiting stall protection and approach speed is a fundamental issue that the designer of a canard or tandem-wing airplane must consider.

Sometimes the changes in airflow over the airplane as angle of attack increases reduce the stability of the airplane. The pitching moment curves for such a case are shown in Figure 3. 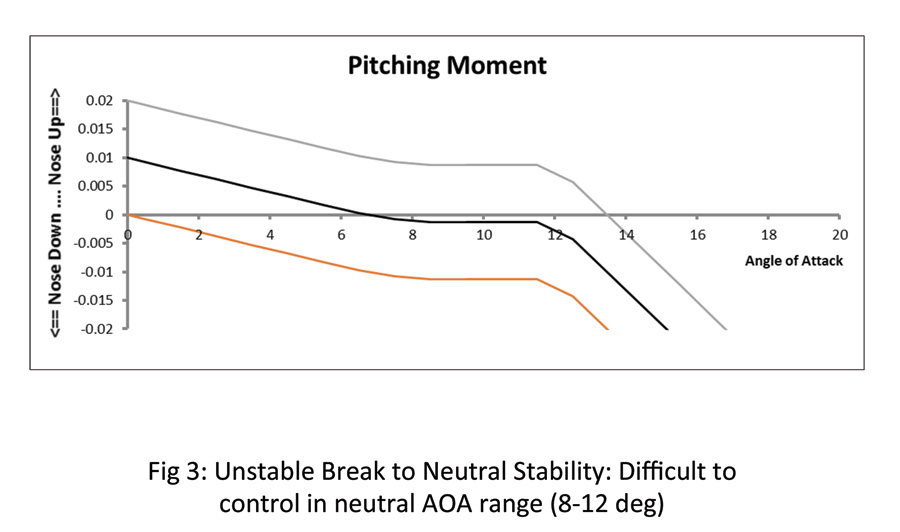 For this example, the airplane has a desirable nose-down pitching moment break at the stall, but also has an unstable trend starting at lower AOA (approximately 8 degrees). In the AOA range between 8 and about 12 degrees, our example airplane has neutral stability.

A pilot flying an airplane with this type of pitching moment curve will feel as though the pitch control forces are lightening at slower airspeeds. This might not be entirely true, but what the pilot is feeling is the loss of a linear increase in pull force required to trim to slower airspeeds.

This is not a desirable state of affairs for several reasons. The first is that the elevator deflection—and hence stick force—required to trim the airplane is essentially constant over the neutral stability AOA range. The pilot will find it difficult to capture and hold a constant angle of attack (and hence airspeed) since the airplane will be in trim over several degrees of AOA and has little natural tendency to remain at a single trimmed condition or stop a pitch rate. It will require close attention to airspeed and nearly constant correcting stick inputs to hold airspeed when flying in this angle of attack range. The pilot’s workload will be high, and little attention will be available to perform other tasks in the cockpit.

This same situation makes it easy for the pilot to overshoot when increasing angle of attack to slow down. The overshoot can lead to an inadvertent stall.

This tendency to overshoot angle of attack can be dangerous, particularly in a trainer used to teach stalls and spins. In spin training the airplane ends up nose-down, with rapidly increasing airspeed once the autorotation of the spin has been stopped with proper rudder and elevator inputs. The pilot will pull to bring the nose up and recover to level flight. The airplane will develop a significant nose-up pitch rate. When it enters the neutrally stable AOA range, it will continue to pitch up unless the pilot actively stops it. This can lead to a secondary stall and loss of control.

T-tailed and V-tailed configurations often have issues with this type of pitch nonlinearity because the tail moves down into the wing downwash at higher angles of attack. The tendency to get into secondary stalls was a problem with one T-tailed trainer introduced in the late 1970s and was probably one of the reasons the airplane never became popular. 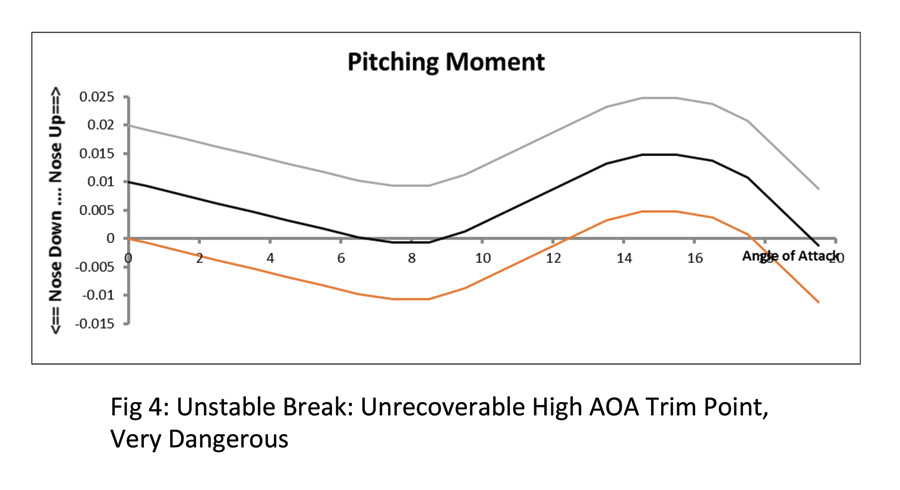 There is a range of angles of attack where the airplane is unstable. Usually, at a high enough angle of attack, there is a second, nose-down break and the airplane becomes stable again.

This set of characteristics is extremely dangerous. If the airplane reaches the angle of attack where the initial unstable behavior starts, it will tend to pitch up on its own. A rapid, hard push on the stick may be the only way to stop it and keep it from pitching up into a stall. In some cases, even this may not be enough to prevent the pitch-up.

The middle curve in the figure represents the situation where the pilot has trimmed the airplane to fly at an angle of attack right near the beginning of the instability. The airplane is trimmed to fly at 7 degrees AOA. If it reaches 9 degrees, it will pitch up on its own and end up stably trimmed at a much higher AOA. In this condition the airplane is stalled, but it is stable and in trim so it tends to stay there.

The pilot will try to recover by deflecting the elevator to its full-down position. It the elevator has enough control power it might be able to force the airplane back to a lower angle of attack and regain unstalled, controlled flight. Even if this is possible, the airplane is extremely dangerous to fly because of the danger of losing control in the unstable portion of the flight envelope.

Even more dangerous is the situation represented by the lower curve on the figure. If the full-down elevator leads to a situation like this, the airplane cannot recover from the high AOA stall. Full-down elevator moves the trim point down a few degrees, but the elevators do not have the ability to drive the pitching moment to nose-down below this trim point. The pilot has no way of forcing the angle of attack down below this, and the airplane will remain stuck in a high angle of attack, stalled condition.

This situation is called a “deep stall” or “hung stall.” The pilot has no way to make the airplane recover, and it will remain stalled, falling at high angle of attack and low forward airspeed until it hits the ground.

Deep stalls have caused several fatal accidents over the years. Early T-tailed airliners had problems with this in development, and it has also been a problem for some canard and 3-surface configurations where the main wing stalled before the canard.

A caution here for people flight testing new designs, or testing aft CG conditions: A deep stall can sneak up on a pilot if the pitch-up is not very abrupt. The pilot may hold a constant stick force or stick position and not realize that the airplane’s angle of attack is still increasing. The airspeed will drop without a large change in pitch attitude, and the descent rate will build up. The airplane can end up at a high angle of attack with the nose slightly low, or on the horizon, but the flight path headed downward at a steep angle.

Any situation where the pitch forces lighten with increasing angle of attack, or where the elevator deflection required to trim the airplane stops increasing with decreasing airspeed could be an indication you are entering an area of pitch-up or reduced stability. Proceed very carefully, since it could be a first warning of a very dangerous situation.