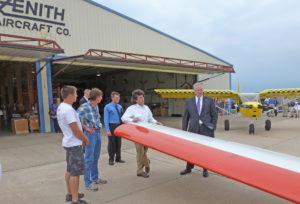 Job creation is closely tied to export growth, Missouri Governor Jay Nixon said this week during a visit to kit plane manufacturer Zenith Aircraft Company, which has more than 30 percent of its sales in exports.

Zenith is one example of how Missouri’s exports continue to grow, the Governor said. International exports in Missouri are up by 13 percent, or an additional $1 billion, through the first two quarters of 2011, after increasing an impressive 35 percent during 2010. To continue the success of export growth and job creation in Missouri, Governor Nixon urged the legislature to pass a Made in Missouri jobs package during the upcoming special session of the General Assembly, which will begin September 6.“A critical part of creating jobs here at home is helping more Missouri companies export their products abroad,” Governor Nixon said. “Zenith Aircraft is a great example of what a business can accomplish when our policies are focused on their success. That’s why I’m urging the General Assembly to pass a bipartisan, Made in Missouri jobs package that will help more Missouri businesses grow their exports and grow our workforce.”

Zenith Aircraft Company is in the business of designing, developing and manufacturing kit aircraft. The independent, privately owned company was formed in 1992 in Mexico, Missouri, and is based in a 20,000-square-foot production facility at Mexico Memorial Airport. Zenith has acquired the exclusive rights to manufacture and market Zenair kit aircraft designs from designer Chris Heintz. 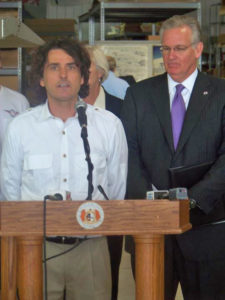 The Missouri Department of Economic Development’s International Trade and Investment Office has worked with Zenith for many years to help identify dealers in a variety of European markets. Zenith has a large export market in Europe and Australia with growing exports to Brazil, India and China, the company said. Export sales are especially strong for the utility “sky jeep” models, the STOL CH 701, 750 and four-seat STOL CH 801 utility aircraft.

Governor Nixon has called a special session of the Missouri General Assembly to pass a bipartisan jobs package that will foster growth in science and technology industries and expand Missouri exports, along with passing tax credit reform legislation to pay for these additional investments and ensure continued fiscal responsibility.

You can read the full text of the Mexico Ledger newspaper article here. For more on Zenith Aircraft Company, visit www.zenithair.com.

Marc Cook - March 10, 2008
0
Two builders helped each other build RV-9As, each employing significantly different outlays of cash. The results are impressive in both cases, but for different reasons. They help us ponder the question as we build: What is something worth? By Marc Cook.