Home Newsline News Red Bull Air Races: What the Old, New and Experimental Can Do

It’s race day on San Diego Bay in Southern California. I look around at the more than 70,000 people (120,000 over two days) assembled on the banks east and west, at the flotillas on the bay north and south of the race course, listen to the thumping bass on the rock star sound system coupled to a series of stadium JumboTrons and think, “This is pushing to be a 3D NASCAR-type experience.” 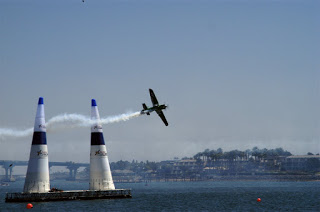 High energy announcers pump the Embarcadero crowd, and the press, armed with millions of dollars’ worth of audio visual equipment, are here to cover the spectacle. And a spectacle it is. Pilots flying high-end aerobatic aircraft come screaming through a series of tightly placed air-filled rigid pylons that force them to not only go fast and turn hard (think 9 G), but also to use their extreme aerobatic skills to precisely slip through the obstacle course without missing a maneuver. And they have to do it faster and more precisely than the next guy. Kind of like Grand Prix, only in the air.

Red Bull Aviation GMBH has hosted the races, now in their fifth season, with the vision of bringing back the prestige and excitement that air racing generated in the 1920s and 1930s. The company hosts 10 races on four continents, pitting 12 expert aerobatic pilots and their extreme machines against each other in a highly hyped, carefully scripted event. About the only thing the race directors don’t know on a second-by-second basis over the four days of training, qualifying and racing is who will win. That part of the race is pure skill and a little luck.

The pilots, a truly international bunch, fly highly modified Extra 300SR, Edge 540s or the new made for Red Bull racing MXS. They all use tweaked Lycoming 540 or 580 Thunderbolt engines, and they hit the starting gate at an average of 230 mph. Then the obstacle course starts. 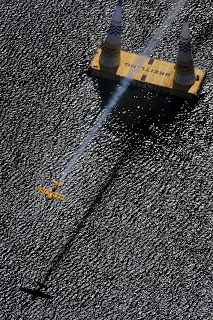 The MXS was designed for the rigors of rapid assembly and disassembly, which are part of a show that must break down in San Diego on a Monday and be halfway around the world two weeks later. The airplane is made for that–and still manages to be light, strong and clean as a whistle (did I mention maneuverable, because that’s important, too). Every one of those airplanes comes from a purebred Experimental aircraft lineage.

The race in San Diego left two Americans, Mike Mangold (2nd) and Kirby Chambliss (3rd) chasing Brit Paul Bohomme, who has now beaten the pack twice in a row. The next race, true to its international spirit, is being held on the water between Detroit, Michigan, and Windsor, Ontario, on May 31.

I hope that Red Bull, for all of its Madison Avenue glitz, succeeds in its quest to put its brand of air racing back on the top of the popular sports venues worldwide. I’m a fan of anyone or anything that injects aviation into the popular culture, because without some way to get this gadget-crazy generation of kids idolizing these heroic pilots and oogling over their exciting race machines, we’ve got little hope of attracting them into futures in aviation. Red Bull may not care if there’s a kid in the crowd looking up and saying, “I want to fly like that!” But I do.