A V-tail is a configuration where the horizontal stabilizer and vertical fin are replaced by a pair of surfaces mounted at a high dihedral angle (usually about 45°). Because these angled surfaces can produce both vertical force and side force, the two V-tail surfaces can replace the three surfaces of a conventional tail. The movable surfaces on a V-tail (called ruddervators) move collectively for pitch control and anti-symmetrically for yaw control.

At first look, it appears that by getting two surfaces to do the work of three, the airplane can have a smaller total tail area, which should reduce both drag and weight. This idea is still cited as a reason to use a V-tail configuration. In fact, with one small exception, this isn’t true in reality.

Unfortunately, this is not the case because the aerodynamic force generated on a V-tail surface acts normal to the plane of the surface, not directly sideways for yaw or vertically for pitch. Accordingly, only part of the force the tail surface generates actually stabilizes or controls the airplane, while the rest is canceled out by an equal and opposite force in that axis generated by the opposite-side V-tail surface. For example, in pitch the V-tails generate symmetric forces normal to the tails. Part of this force is oriented vertically and contributes to pitch control or pitch stability. The other component of force is oriented horizontally, and those forces are equal and opposite on the two tails and provide no net contribution to pitch stability or control.

Similarly, the yaw lateral component of force on each tail does contribute to yaw stability and control, but the vertical components are equal and opposite and generate a rolling moment that may or may not be desirable.

The net result is that in order to provide the same stabilizing influence in pitch and yaw as a conventional tail, the total area of the V-tail surfaces must be the same as the total area of a properly sized vertical fin and a properly sized horizontal tail. This means there is no net reduction in tail area or wetted area of the airplane using a V-tail.

The wasted force (e.g., the lateral component when trying to trim in pitch) means that the V-tail surfaces need to generate more total aerodynamic force to produce a given trimming or stabilizing influence. This results in extra induced drag, which increases trim drag and also the loads on the tail structure.

There is a weak argument that because a V-tail has fewer junctions between the tail surfaces and the fuselage there will be some reduction in junction and interference drag.

As we have just seen, the aerodynamic forces on a V-tail will be larger than those on a conventional tail because only part of the total load on the V-tail panels actually produces stabilizing and controlling influence on the airplane. The wasted force we just saw still adds load that the tail structure must withstand, even if it does not help stabilize or control the airplane.

Flutter: V-tails are more prone to flutter than conventional tails, as sadly illustrated by some of the problems experienced by early model Beech Bonanzas. Because the left and right ruddervators are not interconnected and can deflect anti-symmetrically, they can produce large torsional forces on the fuselage. This makes a V-tail airplane more susceptible to a flutter mode where fuselage torsion couples with anti-symmetric flapping of the ruddervators. It’s particularly important to ensure that the control surfaces of a V-tail are properly mass balanced.

Adverse Roll: When the ruddervators are deflected anti-symmetrically to command yaw, the aerodynamic forces on the tails are up and sideways on one tail and down and sideways on the other tail. The sideways forces act in the same direction and produce the commanded yaw. The vertical forces produce an uncommanded roll in the opposite direction to the commanded yaw. This large rolling moment due to yaw-control deflection of the tails also produces large torsional loads on the fuselage and is likely to force the fuselage structure to be heavier.

Dutch Roll: V-tails produce a lot of yaw/roll coupling due to their high dihedral. This can reduce Dutch roll damping. The usual cure for low Dutch roll damping is to increase directional stability. If we try to do this by enlarging a V-tail, we also increase the yaw/roll coupling, which works against the desired effect of enlarging the V-tail. It might be necessary to adjust the dihedral of the wing to help offset the rolling moment produced by the V-tail.

Pitch-Up: As the angle of attack of the airplane increases, the V-tail surfaces move down relative to the wing. This can immerse them in the downwash of the wing, which will produce a negative angle of attack change on the tails. This produces download on the tail, which drives the nose up. V-tail configurations can be prone to nonlinear pitch behavior and pitch-up at the stall.

Why Use a V-tail?

A V-tailed airplane will probably be heavier than an airplane with a conventional tail. V-tails have no drag advantage, are more flutter prone and introduce the possibility of pitch stability issues. In spite of this, there are some special cases where it can be a good design choice.

Tail Ground Clearance: Some sailplanes have V-tails to give the tail adequate clearance from the ground when the glider is on the ground with one wingtip resting on the ground.

Wake of Upstream Components: Some airplanes have features that produce a turbulent or separated air wake in the area where a conventional horizontal tail would normally be mounted. A V-tail is one approach that can move the stabilizing surfaces up and out of this wake. While this can work, there is always the risk that the V-tail will move down into the wake at high angles of attack.

Fewer Parts: A V-tail has two panels instead of three, and they can sometimes be made symmetrical left/right, which simplifies the manufacture of the airplane. On an airplane with a powered control system, a V-tail configuration can have fewer (albeit larger) actuators than a conventional tail.

A final reason to use a V-tail has nothing to do with the aerodynamics of the airplane. Several military airplanes (notably the Northrop Tacit Blue and YF-23) have V-tails to reduce their radar signature. 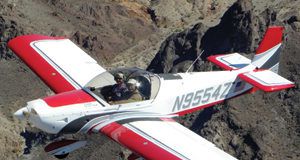