Lycomings four-cylinder engines are the most popular engines installed in kitbuilt airplanes. While carburetors used to be the fuel mixer of choice, mechanical fuel injection has been gaining popularity-it is now price competitive and better performing (particularly if you intend to run lean-of-peak EGT mixture settings). The most common system is the Bendix/Precision RSA. We use the slash here because Bendix developed the system in the 1950s, but the rights and production now belong to Precision Airmotive in Washington state. (Incidentally, as you read this, Ill be in Spartanburg, South Carolina, learning more about the alternative Airflow Performance system. Look for a report in a future issue.) 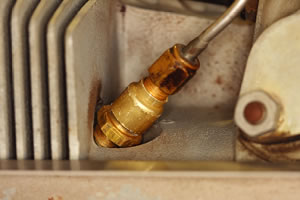 The modern Bendix-style injector has a replaceable insert. Be very careful torquing the injectors into the cylinder head.

The heart of the RSA-type fuel-injection system is the fuel servo unit-sometimes known as the servo regulator. Its bolted onto the air-in end of the engine, and is in unit with the throttle body. Continentals mechanical injection separates the throttle body and fuel-metering units, which is why I make the distinction.

Fuel flows in through a fine screen at the fuel inlet to the fuel-control portion of the unit. The needed fuel flow/mixture is controlled by the movements of air and fuel diaphragms that constantly sample and adjust for changes in inlet (ram) air, venturi air pressures, and unmetered and metered fuel pressures. These diaphragms control movement of a shaft that opens or closes a ball-type servo valve, controlling the fuel flow to the engine.

Fuel flows out of the servo regulator through a flexible insulated hose to a flow-divider assembly mounted on top of the engine, and then out through stainless-steel lines to fuel-injection nozzles at each cylinder. The flow divider does three things: It evens out the idle, distributes fuel to each cylinder and aids in a clean shutdown of the engine.

The engine must be at operating temperature. Running the engine for short periods on the ground is not sufficient.

The idle-mixture adjustment assembly consists of an adjustable-length linkage between the throttle butterfly shaft and the idle valve lever thats attached to the fuel-control portion of the servo regulator. Turning the thumbwheel one way shortens the link, richening the idle mixture; turning it the other way lengthens the link assembly, leaning the mixture. 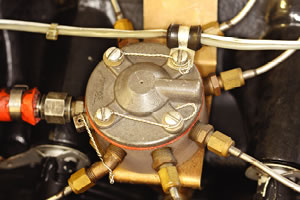 The flow divider does more than distribute fuel to all the cylinders; it contains an anti-drip valve to keep fuel from seeping into the engine and to provide a clean idle cutoff.

Precision Airmotive recommends cleaning injector nozzles and fuel control fuel inlet screens every 100 hours or at every annual, whichever comes first. Don’t ignore the fuel-inlet screen-Precisions DVD titled Maintaining the RSA Fuel Injection System recommends cleaning the inlet screen every 50 hours. The RSA fuel-injection system supplies a constant flow of fuel to the flow divider and then out to the injection nozzles, which are screwed into the aluminum cylinder heads. When the mixture control is pulled back to stop the engine the hot cylinder heads throw off enough heat to boil the fuel in the stainless-steel fuel lines that run from the distributor valve to the nozzles. The lighter components of the fuel evaporate, but the less volatile constituents of the fuel cook down to a varnish. When the varnish layer gets thick enough, fuel flow to the cylinders is restricted.

Idle mixture, and to some extent idle speed, are not static. Plan on fine-tuning the idle mixture at least twice a year due to seasonal climatic changes, after cleaning injection nozzles and after work on one or more cylinders.

Troubleshooting: You Love It!

If the engine still doesn’t start easily, idle smoothly, accelerate without hesitation, develop full power, or if it exhibits a stumbling or incomplete shutdown after completing the idle speed and idle mixture adjustments explained above, or if the idle speed and idle mixture values cant be set, further trouble-finding procedures must be carried out.

Jon Croke - December 28, 2020
2
There are two materials that are commonly used for homebuilt windshields and windows: Lexan and Plexiglas.