Admit it: We’re all amateurs. Unless we’re actual test pilots, none of us are test pilots. Yet, when we sign the checks for those airplane sub-kits, drill/deburr/dimple ribs and bulkheads, and pitch into the never-ending primer debate, we forget that we have also signed up to be future test pilots.

I’m not ready. If you’re like me, you probably dedicated your hard-earned cash to the aircraft project itself. I admit that I haven’t logged a single general aviation hour in a couple of years. I know…shame on me, but there are only so many bucks to spend. So before I present my aircraft for pink slip blessings and enter into Phase I testing, I must reacquaint myself with the local FBO for a renewed BFR. Not just a re-hack of my clock-I mean an immersion with plenty of instructed flight hours to the point that I’m not just merely qualified, but most sincerely proficient (in most likely a high-wing Cessna).

However, I’m not building a Cessna. My logic, my friends’ experiences, and my insurer convinced me I need transition training in an RV-7A. Most kit aircraft communities have an online group of some sort, and those sites feature CFIs that offer type-specific transition training. One RV builder with former USAF F-4 and F-15 instructor experience, Mike Vaccaro, has even developed and posted an extensive set of free syllabi for basic and advanced transition training, instructor upgrade training, and aircraft techniques, procedures, and handling characteristics. While military-based, his program is tailored to a more civilianized approach, and he continually improves it based on CFI inputs. Look for it on the Van’s Air Force web site (www.vansairforce.net).

Did you know the F-16 Fighting Falcon’s first actual flight was unintentional? On January 20, 1974, General Dynamics test pilot Phil Oestricher was conducting a high-speed taxi test of the YF-16’s roll response. This Viper (a name commonly used by pilots for the F-16) had the earlier side-mounted stick version that did not move with the pilot’s inputs: It just measured forces exerted by the pilot’s hand. With no stick movement, Oestricher couldn’t judge how much aileron he was commanding. The jet quickly got into a worsening rolling oscillation, and Oestricher stroked the power to get airborne before he lost control on the ground.

Many kitbuilders debate the need for a pre-Phase 1 taxi. Some like the idea of breaking in the brake pads or familiarizing themselves with the aircraft’s ground handling, then checking for post-run cowling, brake, and fuel leaks. But most agree it’s vital to stay well under the aircraft’s takeoff speeds, and that includes adjustments for relative headwind and wind gust components. If the aircraft develops a problem (what some call a “test point”), terminate the taxi test and head back to the T-hangar. 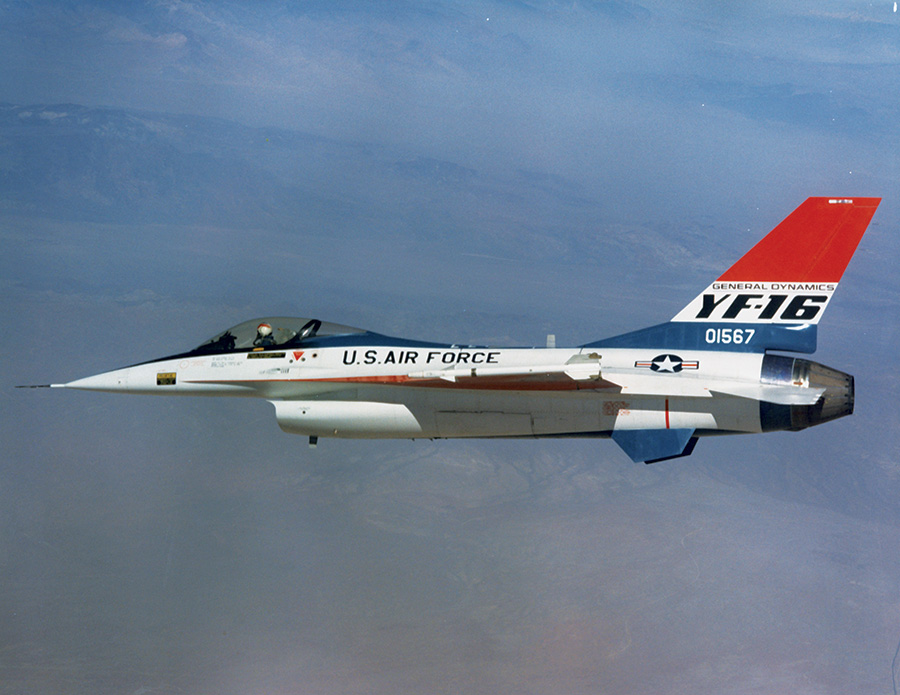 Did you know the F-16’s first actual flight was unintentional? The test pilot planned to do a taxi test, but took the jet airborne when it became uncontrollable on the ground.

In 2010, an RV-6A builder/pilot performed a series of high-speed taxi runs, and planned to complete the airplane’s first flight later in the day. In the first run, the free-castering nosewheel developed a shimmy, and witnesses saw him raise and lower the nose in an apparent attempt to clear the shimmy. At the runway’s end, he reversed course and ran back up the runway on a second taxi run. At around 50 mph, the shimmy reappeared. Witnesses saw the pilot again raise the nose to try and clear it, but the aircraft became airborne. At 3-5 feet agl, rather than continue the takeoff, he lowered the nose to return to the runway, but struck the nosewheel first, then the mains, and porpoised three times until the nose strut collapsed and the aircraft flipped onto its back. Sadly, the pilot did not survive.

Kitbuilders should have a precise purpose for their test run, whether it’s an engine run, taxi test, or a Phase 1 flight. If any problem is encountered, I’d be wary about exploring it further. Going back to the hangar and fixing the problem before reattempting the run eliminates the risk. If the aircraft becomes uncontrollable on the ground, perhaps, at that moment in time, staying airborne may be the safer call. In any case, chair-flying the mission beforehand helps prepare you mentally and procedurally for the test.

As for those aircraft kits whose designs and mannerisms are by now well understood, what are we really testing by conducting something like a high-speed taxi? Designers and kit manufacturers do high-speed tests with new designs, not to validate their performance, but to discover their performance. By now, though, we already know how an RV, Sonex, or Kitfox behaves. Be careful-these airplanes may get airborne well before the pilot pushes the throttle all the way forward. I plan to ask myself: Is there another, less risky, way to get answers to my test question?

I loved flying functional check flights (FCFs) in the Phantom, particularly the high-altitude mach runs. At FL400 (40,000 feet), per FCF procedures, we would accelerate to a predetermined mach-usually around 1.6M-to test the engine intake variable ramps’ programming, then pull the engines out of afterburner and zoom up to FL480. Once there and subsonic, we would light each afterburner to make sure they would light at that altitude, then throttle back and coast down out of the bozosphere. By the way, “bozosphere” is the aerospace term for “crazy high altitude,” as in, “Man, we’re way high…are we crazy?”

A few things to consider: First, F-4 cockpit pressurization comes from the right engine’s bleed air. Second, we were not authorized to fly above FL500 without some sort of pressure suit, which we didn’t have. Got it?

OK, one day at Nellis Air Force Base, Captain Brian Reno and I FCF’d an F-4G for a right engine replacement. All went well up through the FL400 mach run. Then, in the zoom to FL480, as we pulled the engines out of burner, the right RPM sagged way down to about 80%. We both saw it and watched it mostly out of concern for our cabin pressure. However, zooming for the moon, we had also stopped watching everything else. As the RPM slowly recovered, this other spinning needle to the left caught my attention-it was the altimeter…52,000 feet, 53,000 feet…! “Hey, Brian, what say we get back down below 5-0-0?” We topped out at just over FL580. Yes, at that altitude, the world is round and the midday sky is nearly black.

It’s easy enough to say that things can go wrong at any time in a test flight, and that we should expect it. Of course, if we’re testing one particular system or component, we can prepare ourselves for its failure, review emergency procedures, and pre-brief it. In 2011, a Beech King Air crew prepared to test-fly the aircraft after an aileron removal and repair. After a thorough briefing and preflight (including aileron free/correct checks), the test flight progressed normally until, at FL180 in a left turn, the right aileron suddenly departed the aircraft. The pilot flying successfully recovered the aircraft and landed uneventfully. Investigators found that maintenance improperly installed the aileron. This crew had successfully prepared themselves for their flight’s most probable hazard, and handled it when the hazard presented itself.

However, if you’re testing the entire aircraft (as in Phase 1), it’s tough to focus your vigilance toward any particular area. It’s worth the money to have a reputable A&P mechanic, one well-experienced in your specific aircraft, inspect your project before flying or even before presenting your aircraft for pink slip blessings…a fresh set of expert eyes. Here at 52F, Randy Richmond took one-half of one second to see that I had installed my RV-7A lower engine mount spacers backwards-wow, what a catch! 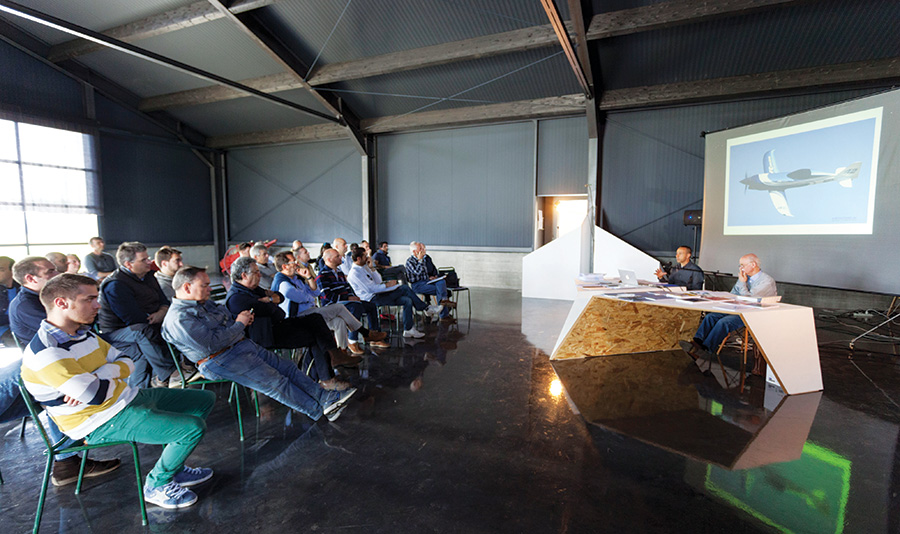 The Club Aviazione Popolare Italia’s Experimental Chapter’s May meeting to explore flight test procedures and safety. The meeting emphasized Van’s RV airframes due to the many members nearing their first flights.

One Titan T-51 kitbuilder, on his inaugural flight, lost engine power when his engine electronics module, mounted just five inches from an exhaust pipe, melted and failed. On a Phase 1 hop, a Pitts S-1C’s engine quit because its brass carburetor float travel (total drop travel) was 5/16-inch less than normal specs require. Despite damage to their projects, both pilots survived uninjured, largely because they were ready.

Be current. Plan and rehearse the event before you ever call “Clear prop!” After checking everything, remember the three rules for an aircraft emergency:

2. Analyze the situation and take the proper action.

3. Land as soon as conditions permit.

Have a healthy expectation for trouble, a chameleon eye constantly locked onto a landing spot, your head on a swivel, and a sold plan to deal with the flight test unknowns.

Marc Cook - April 17, 2012
0
UL Power engines have gained popularity in the homebuilt community in recent years. Marc Cook takes a closer look at the Belgian-made line and the people behind it.