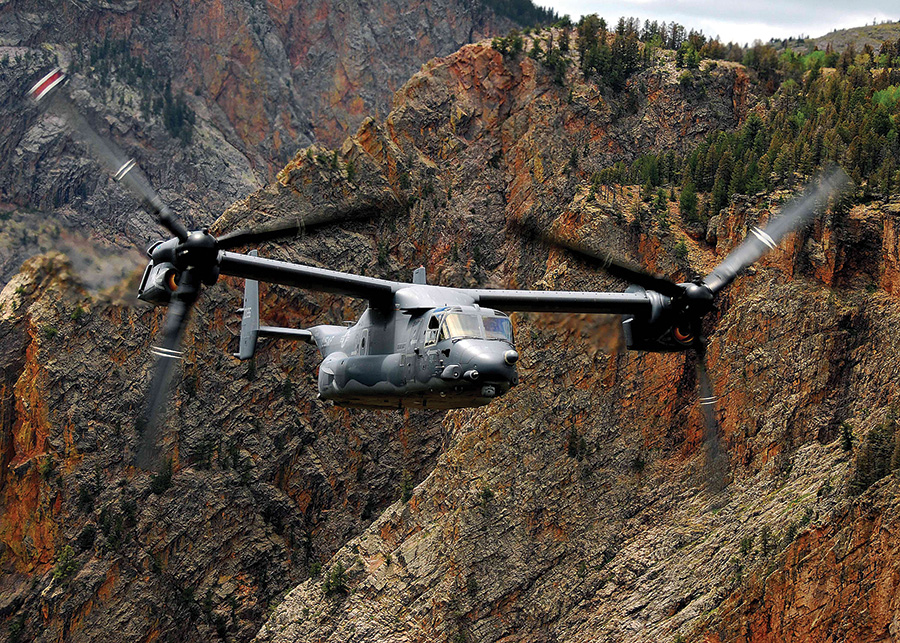 The V-22 Osprey had its growing pains, but now sees regular service in military operations at home and abroad.

Recently, we received an email from reader Linus Bladh asking about VTOL aircraft. He writes:

“I have a suggestion for Barnaby’s Wind Tunnel. I have read his column for about 20 years, and I do not remember him writing anything about VTOL aircraft. I have many times wondered why nobody has managed to produce a simple and safe design.”

First of all, thanks to Linus for being a long-time loyal KITPLANES® reader.

The question is a good one, and VTOL is one of those areas where, at first look, it seems that it should be possible to come up with a “simple, safe” solution. It’s also an area where the old saying, “If you think it’s easy, you don’t understand the problem” also applies.

The major advantage of a VTOL airplane, and the thing that keeps designers seeking that magic solution, is freedom from the requirement for runways and airports. Many ways of achieving vertical takeoff have been tried, with widely varying levels of success. For a very interesting overview of this history, take a look at the “Wheel of Misfortune” graphic at the AHS International web site. What is striking is that although a huge number of methods of providing VTOL capability have been tried, and many have flown as experimental research vehicles, very few have made it into production or regular use. Most of the vehicles shown on the “wheel” failed to lead anywhere useful, and a large percentage of them served more to show why an approach was a poor idea than to show a path to the future.

As of the time of this writing, only four non-helicopter VTOL aircraft have entered regular service: The Harrier vectored-thrust jet; the V-22 Osprey tilt-rotor; the Russian Yak-38 Forger, which used a vectoring main engine and a separate forward-mounted lift jet; and, just arriving on the scene, the F-35B Joint Strike Fighter variant, which uses a vectoring main jet engine, and a shaft-driven lift fan in the forward fuselage. None of these meet the “simple, safe” goal. The fighters can get away with being complex and expensive because they were built for the military services of major powers, and have ejection seats to get to an acceptable level of safety. The Forger actually had a seat with an auto-eject mode that monitored the systems and motions of the airplane in thrust-borne flight and automatically ejected the pilot if the seat detected a failure or an apparent loss of control. Such an ejection must have been quite a ride for the pilot who without warning found himself hurtling through space without his airplane, hoping the parachute system would function properly. The V-22 had some early problems with safety, and even assuming these have been solved, it is extremely complex mechanically.

What these aircraft and their experimental predecessors illustrate is that VTOL capability is costly, and there has to be a very compelling mission need for it to make it worthwhile.

The only type of heavier-than-air VTOL aircraft that has been widely produced and operated is the helicopter. Helicopters routinely take off and land vertically, and are capable of relatively efficient hover. These characteristics make them suitable for a variety of missions that require VTOL and hover capability, such as search and rescue, law enforcement, certain types of warfare, and transporting personnel to offshore oil platforms. Helicopters are considerably more complex than conventional fixed-wing airplanes, but less so than other types of VTOL aircraft.

The big drawback of helicopters is that, while they excel at VTOL and hover, they are slow and inefficient in cruising flight. Igor Sikorsky once said that the helicopter would never be faster or more efficient than the airplane, but “If you are in trouble anywhere in the world, an airplane can fly over and drop flowers, but a helicopter can land and save your life.”

A fixed-wing airplane is much more efficient in cruise than a helicopter. The airplane’s greater cruise efficiency, and the inherent speed limitations of a rotorcraft, are what have driven designers to try to come up with a way to combine the VTOL capability of the helicopter with the cruise performance of an airplane. To get an initial idea of why this is so difficult, we need to look at some of the basic physics of flight.

An airplane in forward flight gets its lift from the interaction of the wing and the air flowing past the airplane. As the wing generates lift, it also generates drag. The engine must deliver enough thrust to overcome the drag of the wing and the rest of the airplane. What makes this work well is that the drag of the airplane is much lower than its lift. Even an inefficient light airplane has a lift-to-drag ratio of between 7 and 10 in cruise, and an efficient fixed-wing airplane can do much better than that. This means that, the first order, the engine must deliver a thrust of not much more than 10% of the weight of the airplane to sustain cruise. The same holds true for takeoff and climb. Even an airplane with a draggy high-lift system will have an L/D much greater than 1. What the fixed-wing airplane cannot do is stop in mid air. The wing needs a certain amount of airspeed flowing over it to generate enough lift to sustain flight.

For hover and vertical takeoff, we do not have the advantage of efficient generation of lift from a wing. To hover, the propulsion system must produce a thrust equal to the weight of the airplane. To take off vertically, and operate safely, we need some excess thrust beyond that. Typically, to operate successfully, VTOL aircraft must have a thrust-to-weight ratio of at least 1.2, which means the propulsion system must be able to generate a thrust of 120% of the weight of the vehicle.

In order to produce thrust, the propulsion system must accelerate a column of air. Propellers and helicopter rotors use rotating, airfoil-shaped blades to do this.

Thrust produced is determined by the change in momentum imparted to the air by the rotor. Since momentum change is determined by the product of the mass of air affected times the change in velocity of the air, for a given thrust, the more mass we accelerate, the less velocity we need to add to it. It takes less power to accelerate a lot of air a little bit, than to accelerate a little bit of air a lot.

This amount of air affected by a rotor is determined by the area of the disk swept by the rotor blades. Ideally, for a given power, the larger the disk area, the more thrust we can generate. The parasite drag of the blades puts some limits on this, but it remains true to the first order.

Because of this phenomenon, the power required to generate a given thrust varies with the square root of the disk loading (pounds of thrust [or weight] per square foot of swept disk area). The advantage of the helicopter is that the large rotor diameter gives a low disk loading, enabling the system to generate a lot of lift per horsepower. 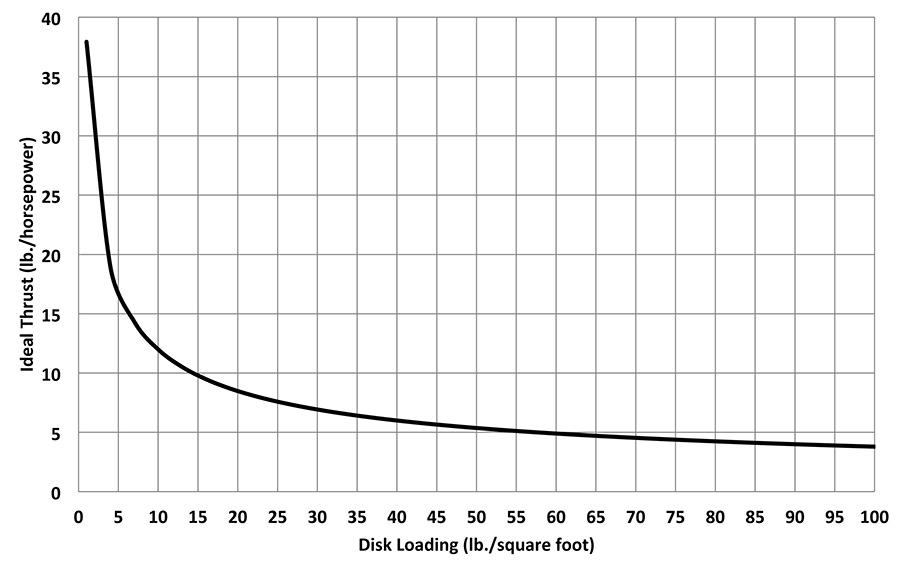 The R-22, which has a takeoff gross weight of 1375 pounds, has a rotor diameter of just over 25 feet, and 130 horsepower. A light airplane of similar gross weight would have a propeller diameter of about six feet. If we were to try to take off vertically, with that propeller aimed upwards, the airplane would have a disk loading of almost 50 pounds per square foot. It would only be able to generate, realistically, about four pounds of thrust per horsepower, so the machine would need just over 400 horsepower to have the same vertical thrust (1.2 x gross weight) as the R-22.

A fundamental problem of fixed-wing VTOL is that propulsion systems that are efficient for cruise have much smaller disk areas than propulsion systems that are good at generating static thrust. In addition to finding a way to vector the thrust from vertical for takeoff to horizontal for cruise, the VTOL designer must face this fundamental mismatch between cruise and hover requirements. The VTOL machine will always need a lot more power than an equivalent conventional takeoff aircraft. 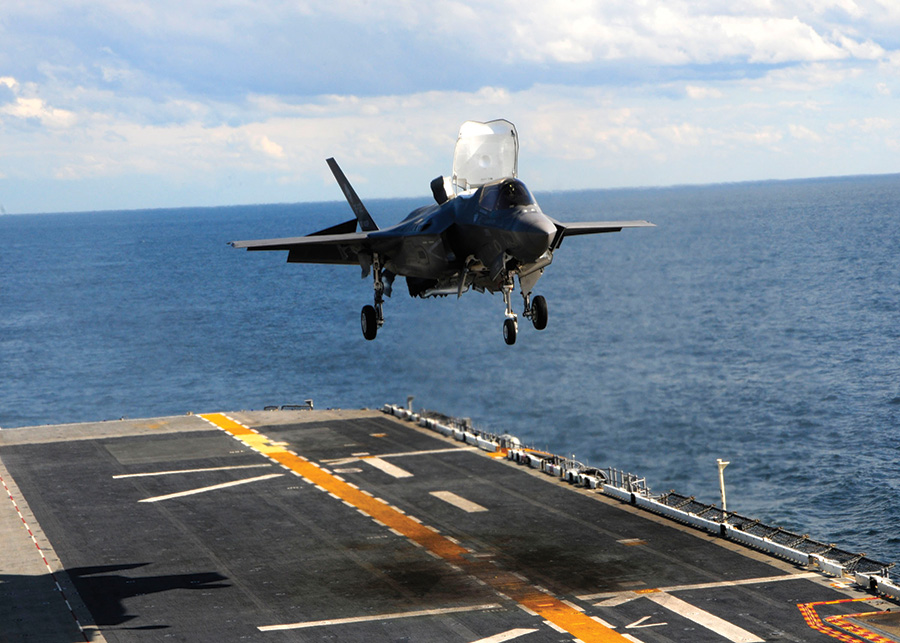 An F-35B Lightning II makes the first vertical landing on a flight deck at sea aboard the USS Wasp (LHD 1).

The choice of disk loading is a fundamental design parameter for any VTOL system. It ranges in practice from about two pounds per square foot for a lightly-loaded helicopter, to a remarkably-high 1460 pounds per square foot for the forward lift fan of the F-35B Joint Strike Fighter. The JSF system generates 20,000 pounds of vertical thrust from a 50-inch diameter contra-rotating fan system. Because of the very high disk loading, this remarkable piece of hardware generates only about 0.8 (eight tenths) pounds of thrust per horsepower. Even so, it is a more efficient vertical thrust generator than a pure vectored-nozzle jet engine like the Pegasus engine that powers the Harrier.

Marc Cook - April 8, 2010
0
The four-seat Van’s RV-10 has been an enduring presence in the homebuilt universe, but its best years may still lie ahead. By Marc Cook.