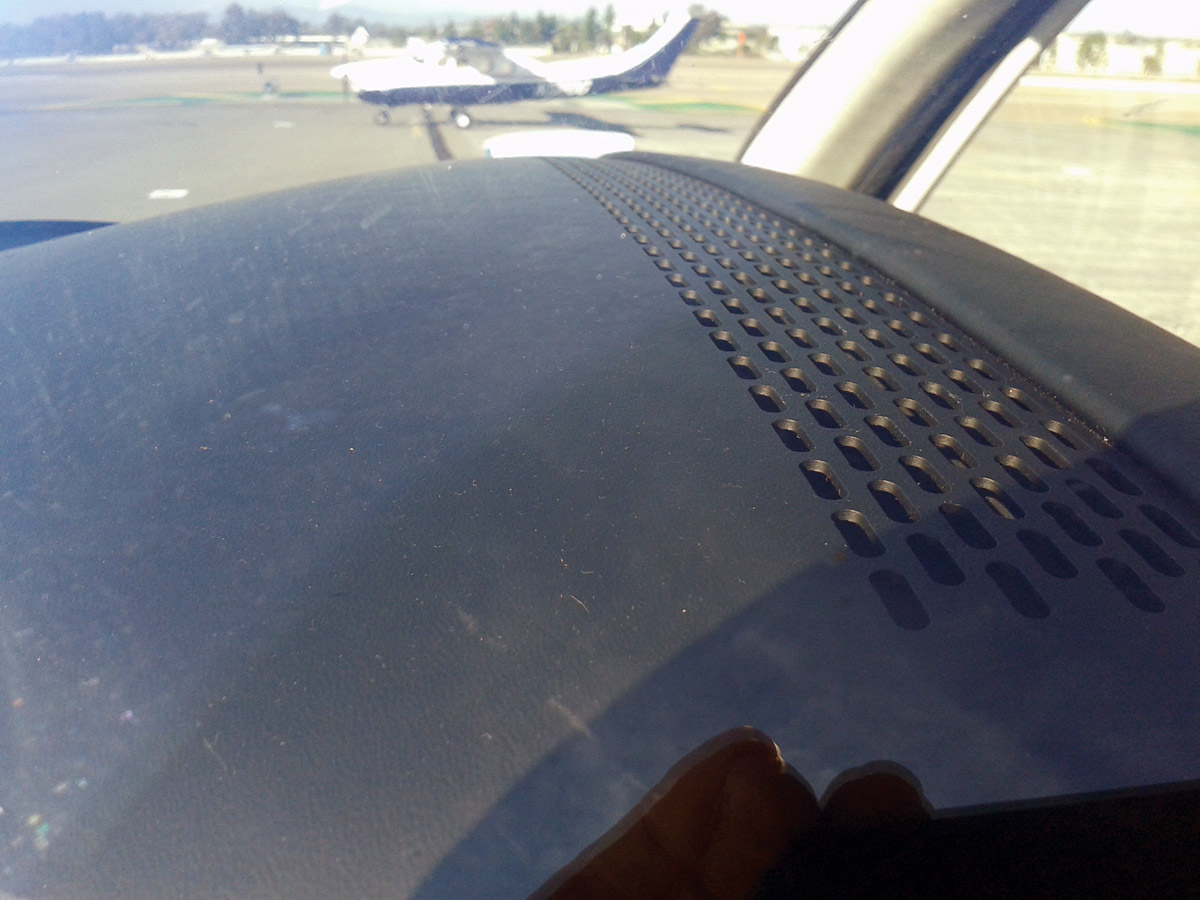 All electrical equipment in one form or another generates heat. Lowering the environmental temperatures in which the electronic equipment is housed, the avionics bay in this case, will extend the mean time between failures (MTBF) of the avionics/electrical units significantly (see Figure 1). 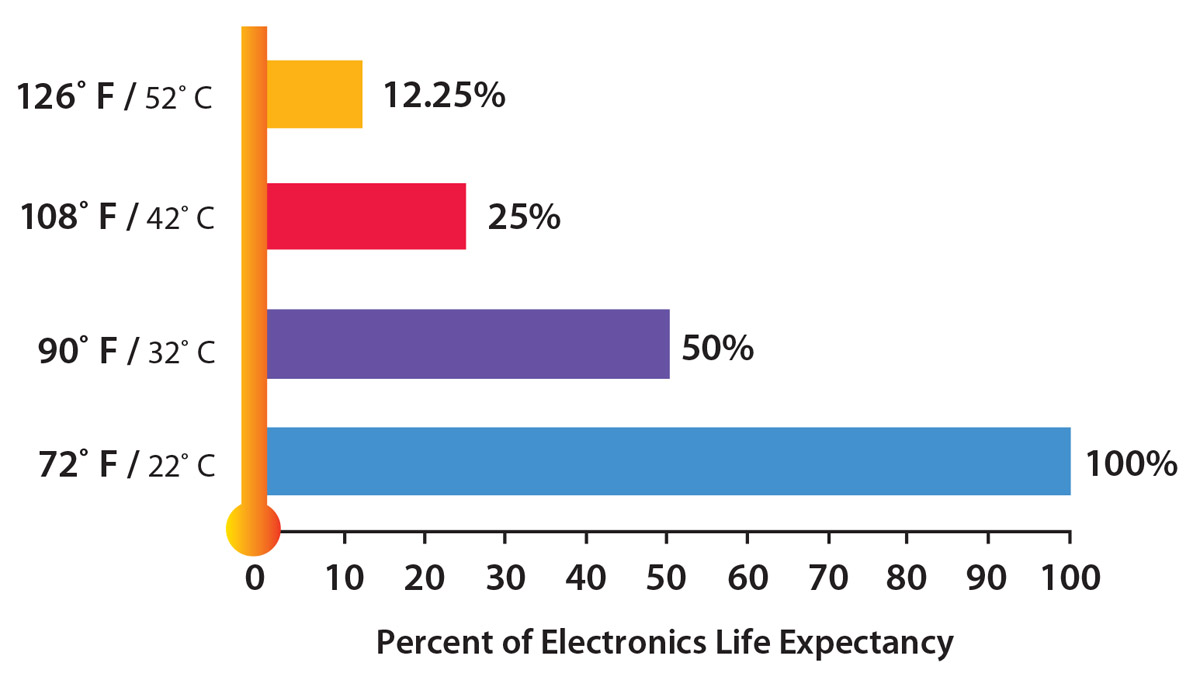 A cooling fan provides a good solution for cooling avionics/electrical units. This in turn prolongs the life of these units. Fans are safe, reliable, easy to install, and an inexpensive way of cooling.

The aircraft I’m currently working on has graphic display units (GDU) for which the manufacturer recommends cooling fans with vents placed in the glareshield behind the GDU. The line replacement units (LRU) either have provisions for cooling or fans have been provided for that purpose.

When dealing with avionics/electrical equipment, you need to determine what size fan is required for cooling or removing heat. I use a simplified method for solving the fan size requirements that consists of four parts: cubic feet per minute (CFM) required to cool, exit opening size, location of the fan(s), and source of air. The fan used in this article was a Lone Star Cyclone 21 DC avionics blower rated at 21 CFM, 24 VDC. The fan has three blower ports, and each port has a half-inch inside diameter.

A piece of helpful information is an advisory circular. They are not required by regulation; nonetheless, they contain useful information. Here is an excerpt from AC 23.1311-1C, Installation of Electronic Display in Part 23 Airplane, Section 27.0, “Environmental Conditions,” 27.2, “Temperature”:

“Electronic systems reliability is strongly related to the temperature of the solid-state components in the system. Component temperatures are dependent on internal thermal design and external cooling. In evaluating the temperature environment, consider the additional heat generated by the equipment, especially in a location where airflow is restricted. To determine if adequate cooling is provided, your evaluation should make maximum use of previous data from comparable installations, thus limiting ground or flight tests to those installations that cannot be verified conveniently by other means. When the equipment/operating environment cannot be verified from previous experience or from an evaluation of temperature values in that equipment location, a cooling test should be conducted.” 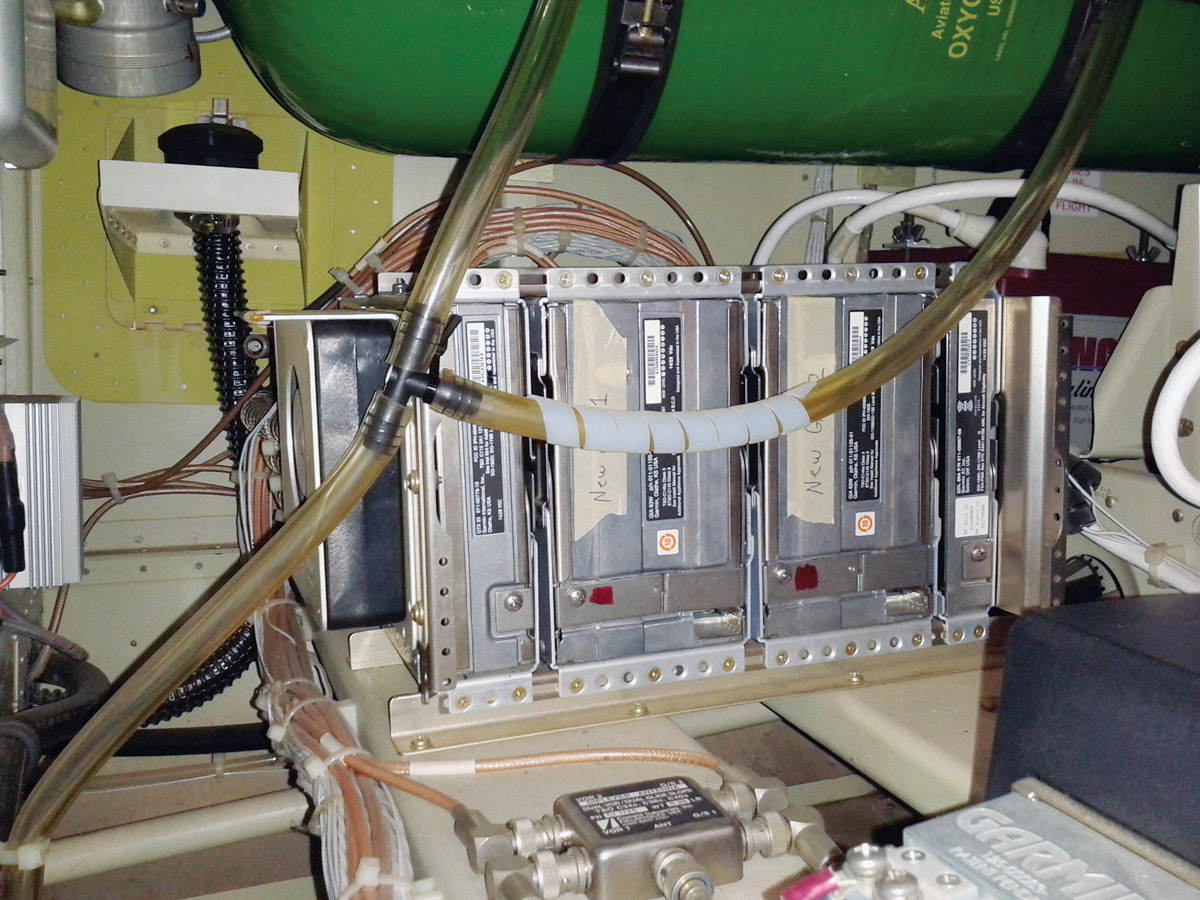 These line replacement units are cooled by the fan (black box) on the left.

Find the Watts Needed for Cooling

Sum the watts of the electrical units in the avionics bay. You’ll find this information in each unit’s installation manual. Don’t include the watts generated by the fan(s).

Always follow the manufacturer’s guidelines. If the manufacturer recommends using a fan with a unit, by all means use one. For example, it is recommended that fans be used with the LRUs in our aircraft, and inlets are provided to direct the ducted air to the avionics.

Some of the units like the primary flight display (PFD), multi-function display (MFD), and line replacement unit (LRU) are provided with fans. It is safe to assume that these units can be left out of the equation for solving the theoretical total required CFM if, after cooling the avionics, the air is ducted out of the avionics bay. Otherwise, they should be included in the calculation because the hot air has not been expelled and is only recirculating in the avionics bay. For example, an aircraft generating almost 700 watts from the electrical equipment may only require approximately 300 watts to be cooled. 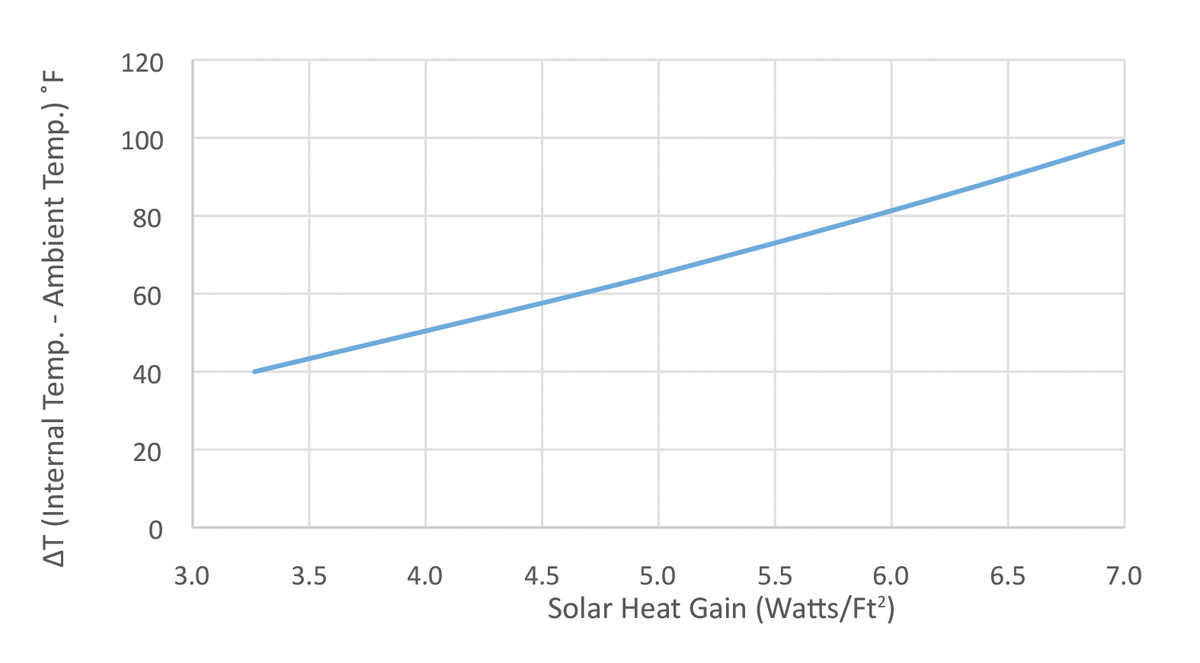 The first step in finding the fan size is solving the CFM requirements. Start by solving for the differential temperature. For example, having a normal day of 59 F, the equipment has been rated for 158 F. This provides a differential temperature, Delta (Δ) T of 99 F (158 F-59 F). The aircraft just might be sitting on the deck with its interior temperature melting away at 158 F. Would you really want to fly in a plane this hot? 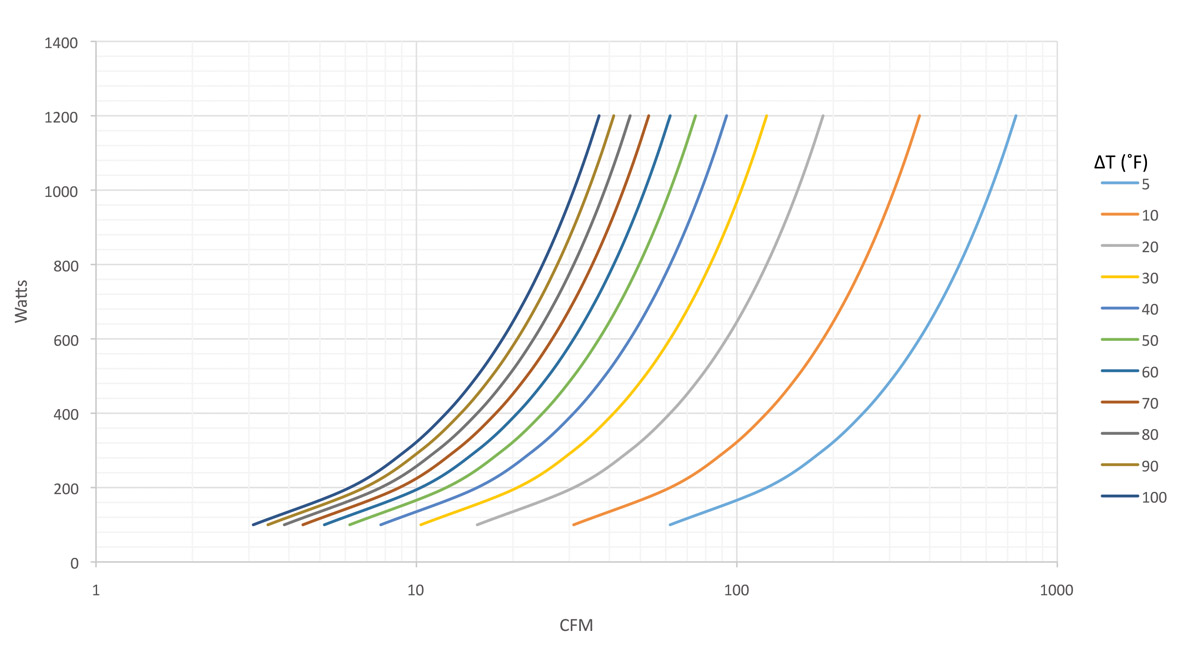 The third step is to solve for CFM. Add the avionics/electrical unit watts to the solar heat gain value, thus becoming 322 watts. Refer to the CFM vs. Watts chart (Figure 3) to obtain the theoretical total required CFM from a fan.

When selecting a fan(s), err on the side of caution. Go with a fan or total of fans that are at least 1.5 times greater than the required CFM—more is better in this case. The fan provides the CFM for cooling; the only way to increase CFM for cooling is to have a bigger fan or more fans. 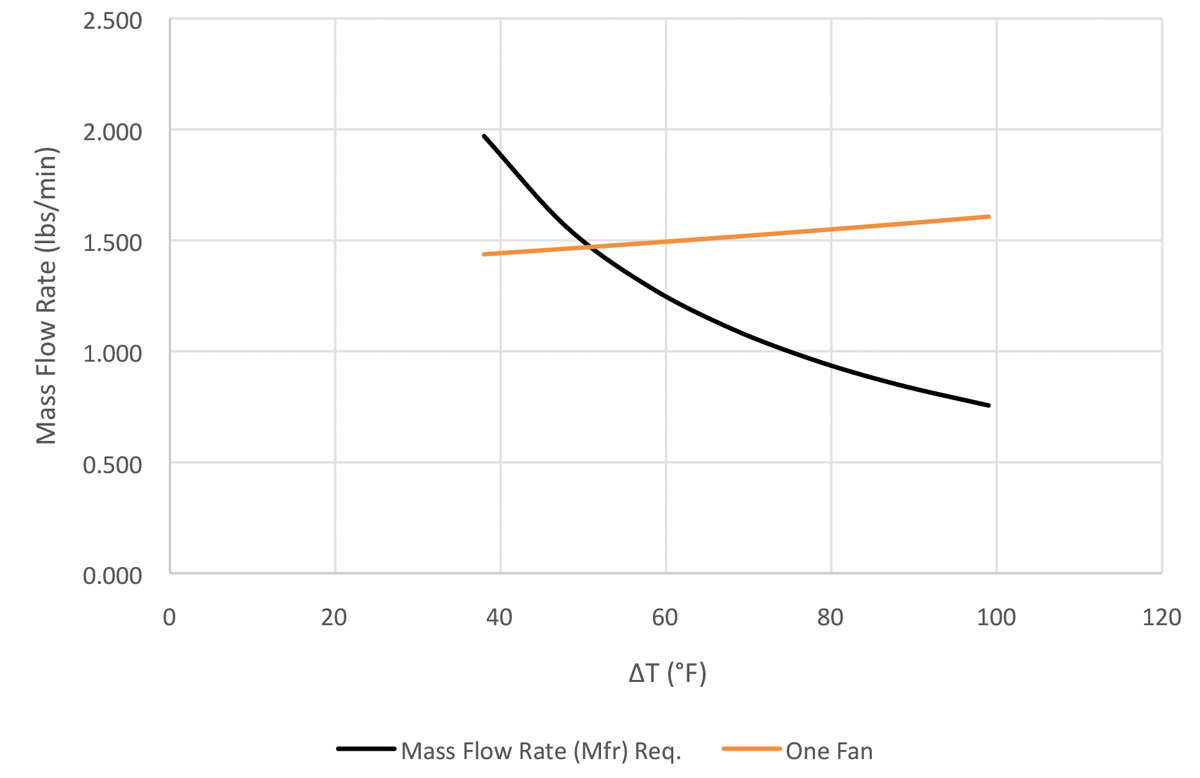 Beware: The air velocity needs to stay below Mach speed due to compressibility. Compressibility occurs at high speeds and high pressures. In theory, it occurs around the speed of sound, which is at 661.7 knots (760.9 mph) at sea level and 59 F, although this will most likely occur around Mach 0.3. 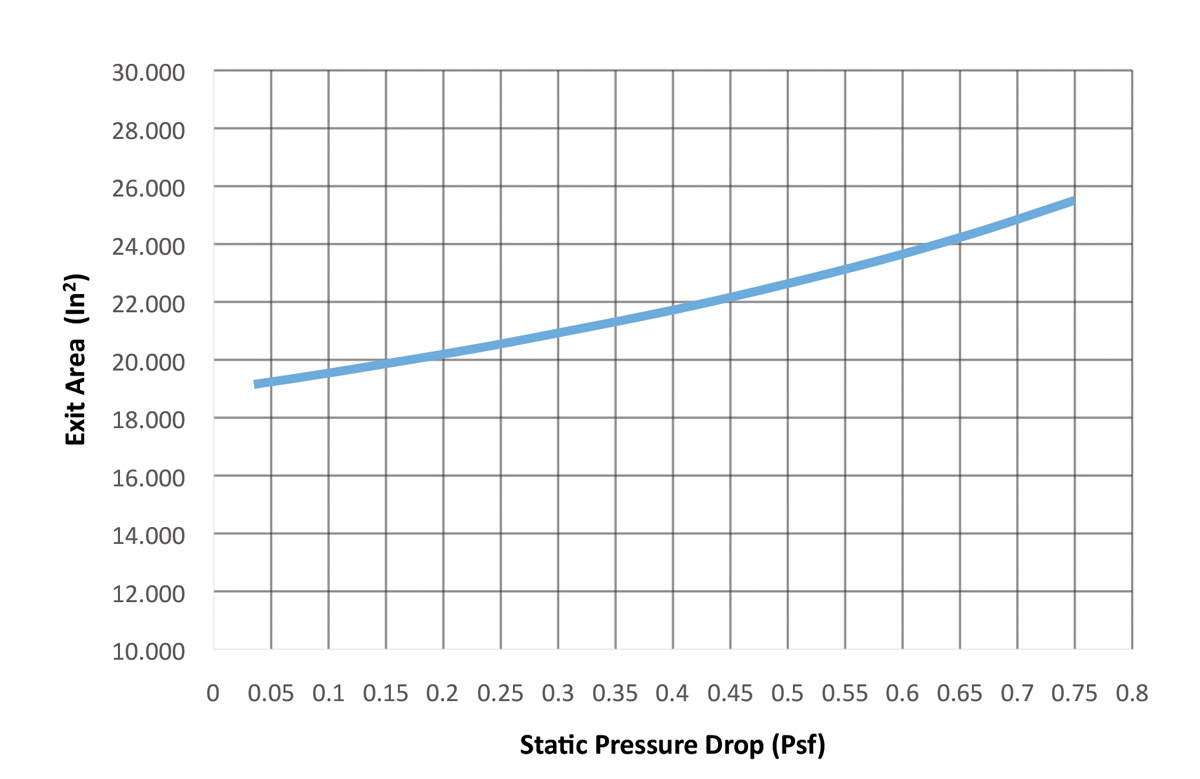 The exit opening needs to be the same size or greater than the entrance opening. The opening(s) can be in a different configuration: holes, slots, rectangles, louvers, etc. with varying sizes. Another question to ask—is there flexibility to change the size of the exit opening? 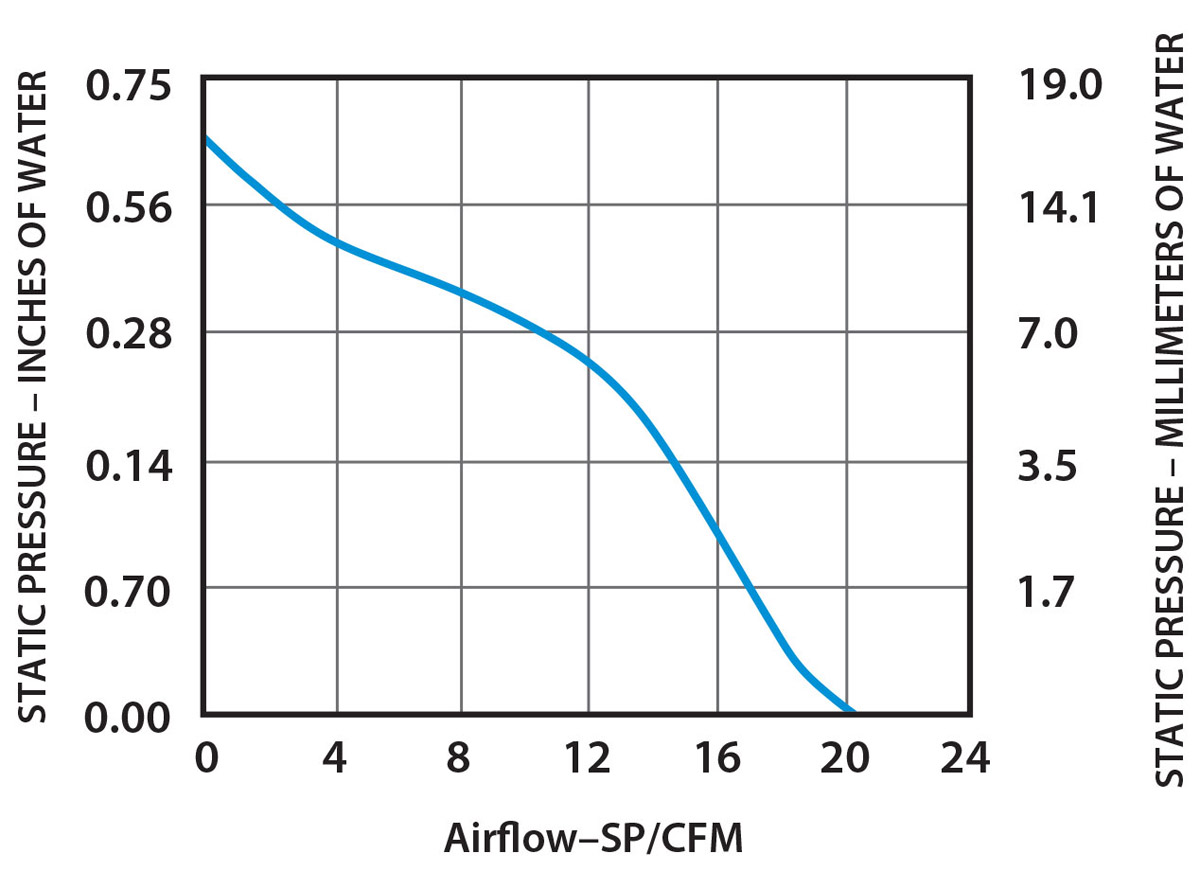 Remember, the objective is to keep the static pressure increase or CFM drop to a minimum. For example, a .56-inch water drop from Figure 6 shows the fan is only producing 2 CFM. Is this acceptable for cooling the watts being generated?

Where should the fan be located? The thought of strategically placing fan(s) directly on the outside of the heat source(s) might solve some of the problems for cooling. However, the downfall is that the surrounding units are neglected from cooling. Having a main fan for circulating the air flow in the avionics bay is ideal; however, there might not be room for one or the efficiency might not be achieved due to flow obstructions. This might be a sound reason for attaching an exhaust fan underneath the glareshield. Nonetheless, it is easier to circulate the air out rather than to extract the air. Among many other things that can hinder exhaust fan performance is the outside air pressure, which always has to be lower than the inside air pressure or the fan will not exhaust the hot air out. 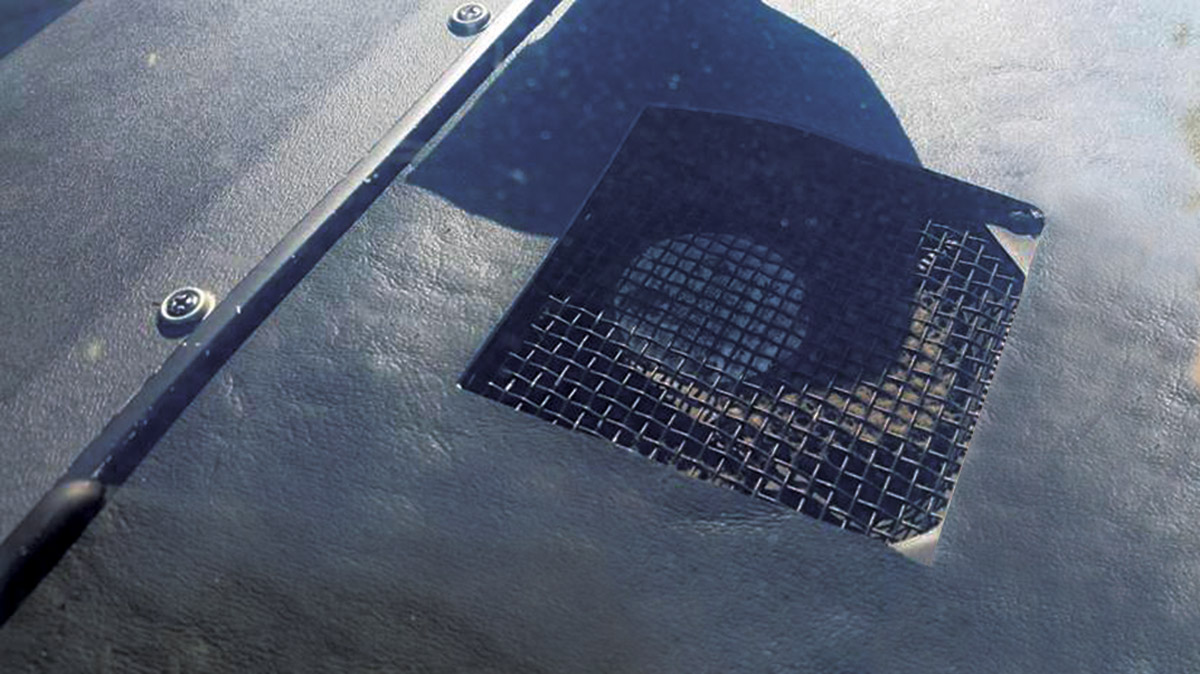 Some avionics manufacturers recommend cooling fans with vents placed in the glareshield.

The primary source of air should be obtained from the cabin air. Very little airflow is achieved from ram air while on the ground. Using outside air or ram air lends itself to ingestion of foreign object debris (FOD) or moisture into the avionics/electrical units, which could cause harm. 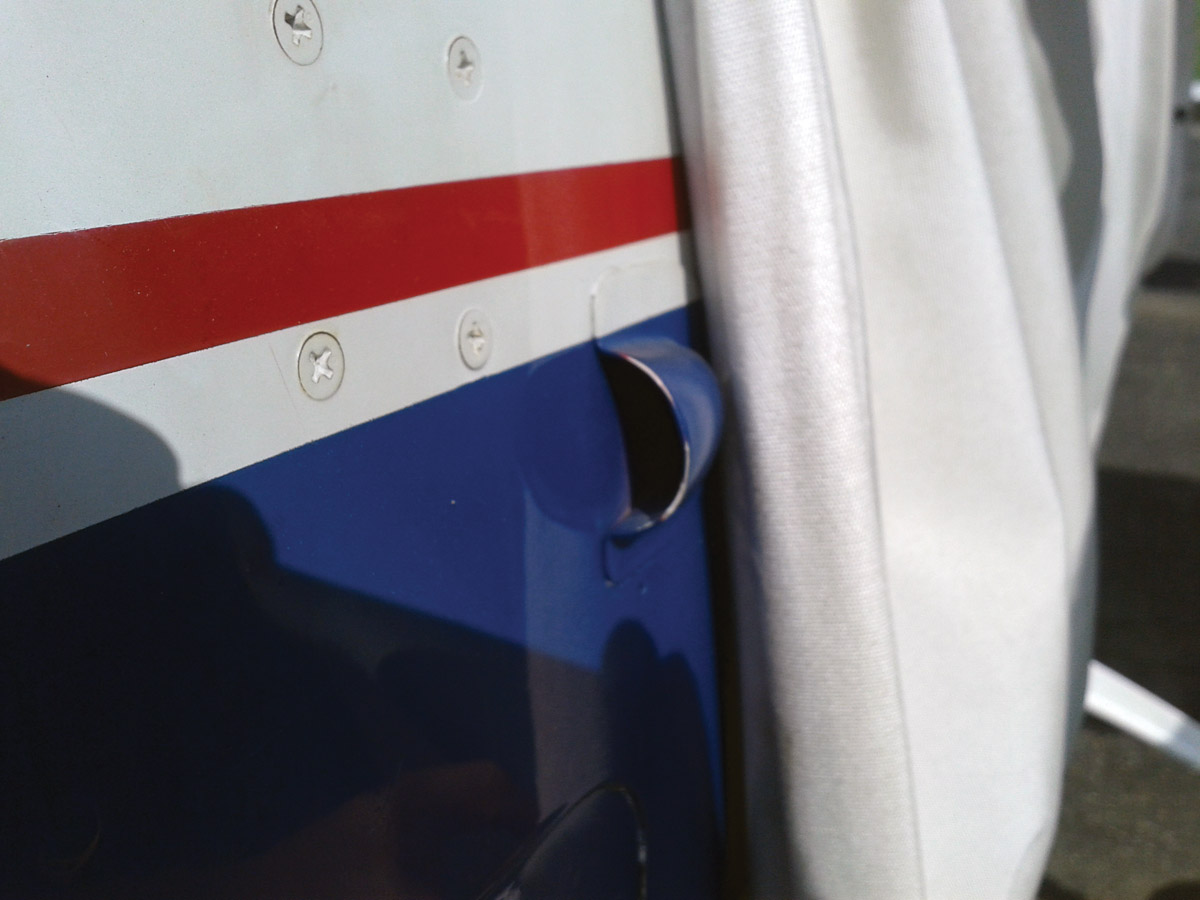 Very little airflow is achieved from ram air on the ground. Ram air can also lead to ingestion of foreign object debris (FOD) or moisture.

This article provides the basics for calculating how much cooling is needed for avionics and electrical units. There are other things that can hinder cooling, such as obstructions and restrictions to the airflow’s path. For a simple solution, use ducting, baffling, or a plenum to direct the airflow where needed.

Check validity of the cooling requirements, then create a prototype for validation; this will determine if the fan selection meets the requirement. Nevertheless, this is only a baseline for determining the proper fan(s) size required for adequate cooling.

Sandia provides 20-CFM fans, with 3 or 5 ports, or an axial fan. The electrical requirements are 14 or 28 VDC.

To achieve 21 CFM there would have to be no pressure drop. In order to accomplish this, another fan producing an equal or greater amount of CFM at the exit opening would have to be removing the air pressure. An exhaust fan or a device that would draw the air pressure out would be used. In theory this would be creating a vacuum. So in order to obtain zero static pressure, the exit velocity and pressure would be the same as the inlet pressure.

Air velocity has to do with removing heat, not cooling. It is not relative to the CFM heat rejection requirements. Air velocity is controlled and limited by the performance of the fan. This is separate from the required CFM to cool the avionics/electrical units. Increasing the air velocity only removes the heat faster; it does not cool. The amount of velocity available, excluding the fan performance, is inversely proportional to the exit area, which is directly related to static pressure.