At the 2018 Soaring Society of America convention this week, I attended a session on “Safety Considerations for Soaring in Northern Nevada,” which covered a lot of good ground on thunderstorms, wave, and the like – but also on the realities of “landing out” if you can’t make an airport. Interestingly enough, the presenter had similar thoughts to mine, in that you can fairly easily find a place to land – but that doesn’t mean that you’ll have good communications for pick-up, and you might be waiting in the desert for awhile. So – survival equipment is important, as is some sort of satellite tracker. A very good point he made is that for us GA pilots, don’t forget that there are “low altitude relay satellites,” otherwise known as airliners, and most of those crews are monitoring 121.5. You can add a little excitement to their day by asking them to relay a call to someone who can come pick you up – so don’t feel you’re alone, so long as you’ve got a VHF radio! 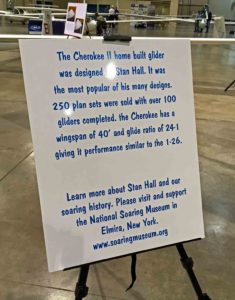 Another things we saw was this gorgeous example of a homebuilt glider from yesteryear – the Hall Cherokee II. Designed in 1956, there were an estimated 106 built over the years, and have a reputation to be easy to build and inexpensive. While quite quaint when compared to a high-performance composite modern ship, let’s remember that once upon a time, glider clubs were THE way into aviation for many young men and women, and simple ships like these were cheap and easy to fly, giving many a way to build hours and gain experience. You can find more on the Cherokee II here.

Finally, an important reminder for glider and power pilots alike – see and avoid is still the primary way to keep from running in to one another, but transponders sure do help! Speaking as one who lives just a few miles from one of the soaring capitals of America (Minden, Nevada), and who flies through their valley several times a week, sailplanes can be devilishly hard to see, even when you know they are out there. Thin, long wings and all-white finishes just blend into the background. ADS-B is a great way to see a transponder-equipped glider, even if they don’t have the equipment to see you… so glider pilots should remember how important it is to turn them on if they have them, and power pilots should be aware that it pays to look at the ADS-B display when you’re in an area with a known glider base.