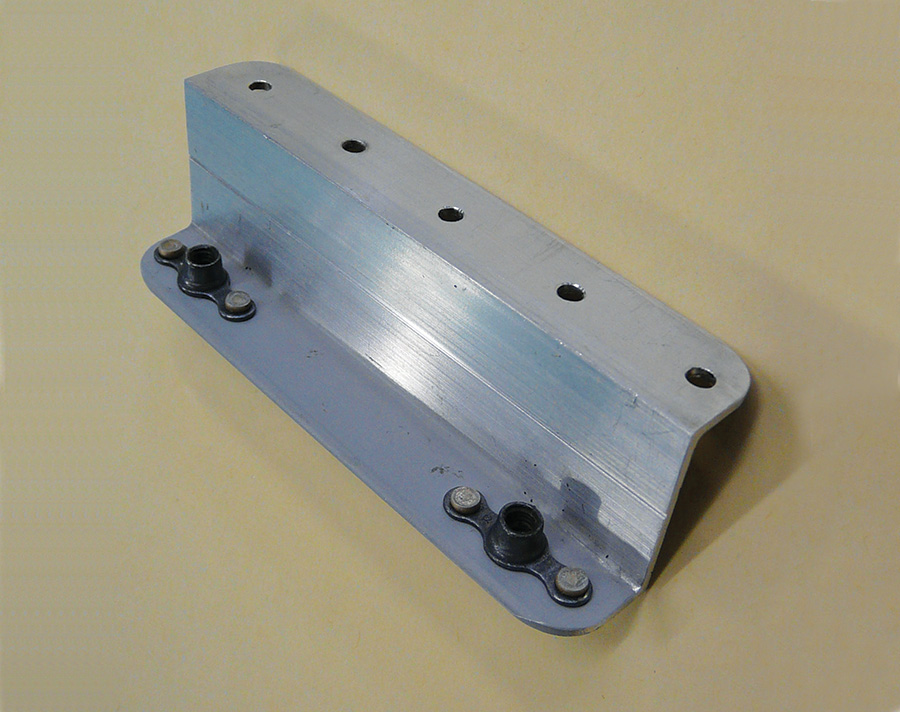 The wing tanks of the popular RV series of airplanes are a section of the leading edge that’s removable and held on with screws and bolts. They are attached to the rest of the wing by a series of screws through the leading edge at the outboard end, some Z-brackets that bolt to the spar web, and screws through the top and bottom tank skin into the spar. The tanks are structural and carry the weight of the fuel and the aerodynamic loads of that part of the wing. At the inboard end, a bracket to the fuselage carries part of the torsion load of the wing. The tanks include several inner ribs, the end ribs, and the rear baffle, which is simply the aft wall of the tank.

As you can see in Fig. 1, the Z-brackets are the short vertical fittings on the baffle. The outboard end rib is on the right. We don’t know the aerodynamic loads on the tank but we do know the loads due to the fuel, and they suffice to illustrate an important aspect of aircraft design.

Fig. 2 shows a cross-section of a tank. I estimated the position of the center of gravity of the fuel and tank structure. That location is called the “centroid.” If you were doing it for real, you’d calculate that. The force due to gravity is shown pointing down. It’s simply the combined weight of the tank and the fuel times the number of Gs the airplane is designed for. Usually the positive G load is greater than the negative one, so the load direction is down.

This force times the distance from the centroid to the spar gives a bending moment that the tank structure has to be designed for. We now have the force, which doesn’t go away, and a bending moment. The mounting points must carry that bending load plus the force itself. We call the force “shear,” and must design for it, too. The force and the moment are the “applied loads,” a term simply covering the loads applied to a structure. The figure also shows some new forces. These are the “reaction” forces.

Remember that law of Newton? The one that says “For every force there must be an equal and opposite reaction force?” He was talking about an object in equilibrium, one that is not accelerating. This means that any part of an airplane that carries a load must react to it somewhere. When you have a sketch of the part with its loads and its reaction forces, you’re showing how that part, all by itself, is in equilibrium.

This is tremendously powerful, because it lets you find all the loads on a part. In fact, it forces you to figure out how the part can handle the loads applied to it. This sort of sketch is called a “free-body diagram,” and it’s one of the handier tools you can bring to design. So, Fig. 2 is a simple free-body diagram of an RV wing tank for pure G loads. Naturally, if we knew them, we could add the aerodynamic loads and continue. But we know enough to show how a free-body diagram works and what shear is, and how Van’s Aircraft, Inc. made a design that supports it.

It’s worth mentioning that if there were loads that were out of plane or spanwise, we could do a different free-body diagram for those, too. It’s a general-purpose structural analysis tool.

In the free-body diagram, you can see that the bending moment M is balanced by a “couple” of forces, both called Ra. These are the reaction forces at the top and bottom skins of the tank. These are the forces that the screws between the tank skins and the spar must withstand. I called them Ra because R means a reaction load, and the A identifies which one. The name is simply for convenience here, not standard nomenclature.

A couple is a special pair of forces. They are equal in magnitude, opposite in direction, and are separated by some distance, known as a moment “arm.” In this case the height of the spar is the distance. Calculating them is precisely the same as figuring the center of gravity of the plane: either one of the couple’s forces, times the distance, is equal to the bending moment M. Why can’t we use both forces? Because they balance each other and provide no net axial force to the spar. But if you stand on one of them, the other puts a moment M on you. The one you’re standing on doesn’t put a moment on you because it has no distance. For the relationship to work properly, the forces are always perpendicular to the arm. We use the word arm to mean a distance when we’re talking about bending moments, and in this case the distance is the height between the two skins.

We know the distance between the top and bottom skins. Call that “h,” and we know how many screws there are in either top or bottom. Call that “N.” The force Ra on a single screw is:

This equation assumes that the screws are equally loaded and they might not be, so be careful with it.

Also notice that there’s a shear reaction Vr that balances the applied load F. This simply shows that the applied shear load has a reaction load that’s exactly opposite in direction. Since they oppose each other, the shear forces are balanced. Van’s designed the Z-brackets to carry the shear force from the tank into the spar web.

Now let’s pull out a Z-bracket and draw a free-body diagram for it. Figure 3 shows it. The applied force is V, and it’s separated by arm b from its reaction force Vr. This imposes a bending moment that’s carried by the attachment bolts to the spar. Their arm is c.

It’s time for some more algebra.

Since there are two bolts, and the structural stiffness is the same for both of them, the shear load is shared equally. This means that

And each bolt has both shear and either tension or compression. The bolts will be sized to handle the combined shear and tension. The bolt in compression isn’t as critical because both bolts get torqued and therefore have some assembly preload tension.

Now we know all the forces acting on a Z-bracket. If we were going to analyze it, we’d look for these things:

There are other aspects of the Z-brackets that we could look at, but if the loads are relatively low and the part reasonably stout, we probably wouldn’t.

Finding the Loads on a Z-Bracket

All variables need to be defined before we can use them. In this example, I’ll be ignoring the weight of the tank and any aerodynamic loads on it. I’ll also ignore any loads that the rest of the wing might apply to the tank. This is merely an example and not a complete analysis.
Find the fuel load on one Z-bracket:

a = 9.86 in – Maximum length of tank associated with one Z-bracket.

Since the mass of the tank is accelerated by 6 G, we multiply the total mass by the number of Gs and G itself. A common shortcut would be to call the density of gasoline 6 pounds force per gallon initially and ignore G. I am being explicit and not taking that shortcut.

I’m distinguishing between pounds mass “lb” and pounds force “lbf.” The weight of the fuel in the full tank at 6 G (this is force F in the article):

The fuel weight is carried by 6 Z-brackets and they carry different amounts of fuel. The ratio a/L adjusts for the non-constant spacing of the Z-brackets and loads up the highest-loaded one. The stiffnesses are similar so that won’t force one to carry significantly more than another.

V is the applied shear load in one Z-bracket:

n = 5 There are 5 rivet holes in the forward flange.

We want to know what the tension and shear forces are on one bolt:

And the load on one rivet: