“Now why,” the man said, “do you think I’d even consider having a ditch-digging machine in our parade? The Salute To Veterans Memorial Day Parade is to honor and remember our past and present veterans.” 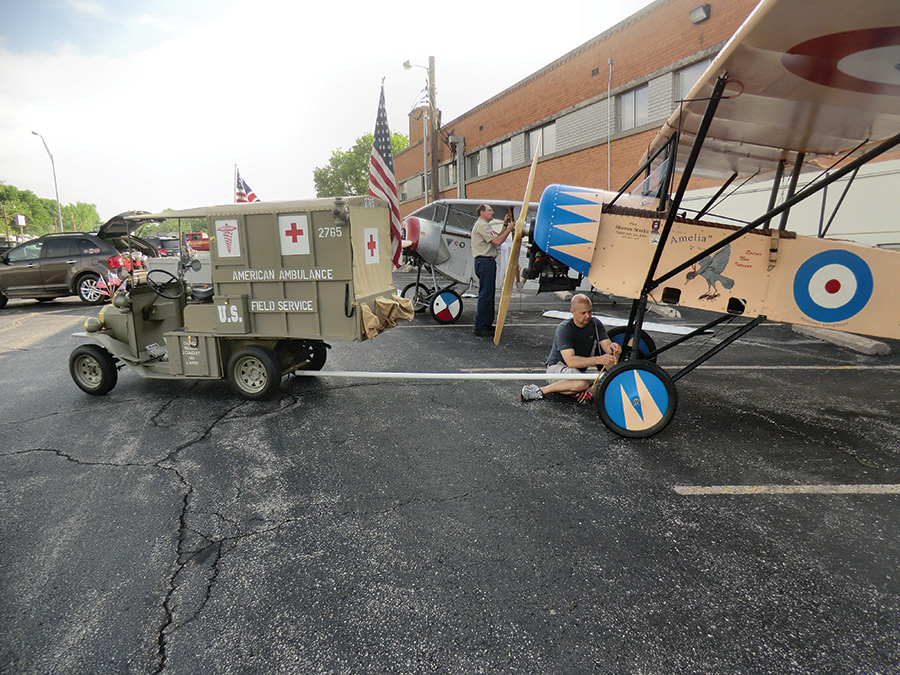 Dave Laur attaches our new towing rig to Sharon’s Morane. The PVC tube really solved the “overrun” problem on the downhill parts of the parade route. Mark Pierce gets his Graham Lee Nieuport 11 ready in the background.

“No, no,” I said, “you don’t understand. This is a replica 1915 WW-I British liaison motorbike with sidecar that they used for transportation on the front lines in the trenches. It was called a Trench Cat because that was where it was used.”

OK, so I lied just a little bit…Well…OK…I may have lied a lot! But it could have happened. In fact, I bet it really did exist. There are just no official records of it happening. Instances like this have happened many times in history since the Roman legions were rampaging through Europe. Records and other minor details are lost, misplaced, or not even noted in the fog of war all the time. Something as insignificant as the Trench Cat wouldn’t have even been worth mentioning. 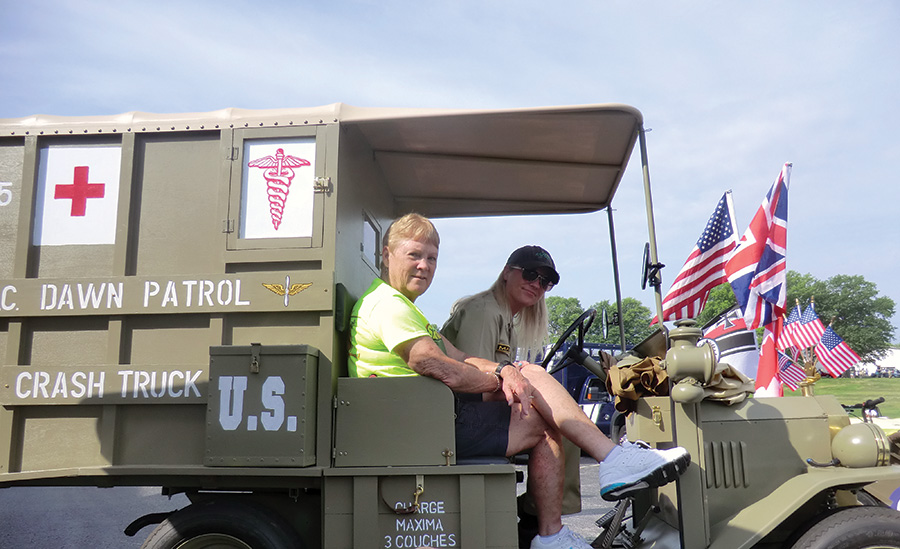 Sharon Starks and Mary Batson wait for the parade marshals to tell us to saddle up. The WWI ambulance has changeable signs that convert it from an ambulance to the official Dawn Patrol Crash Truck.

That’s my story and I’m sticking to it!

It was 2012, and I was talking to Richard Grant. He’s the parade boss and HMIC of the annual Salute To Veterans Memorial Day Parade that goes down the middle of Broadway Street in Columbia, Missouri. They had already made arrangements for two of the Dawn Patrol’s planes to be in the parade. They originally wanted us to fly them over the parade. But since Experimental aircraft are prohibited from flying over populated areas except when going to or coming from an airport, it would have been a real stretch for the FAA to allow us to follow the parade route winding through downtown Columbia miles away from any airport. Besides that, the very idea of flying my little single-ignition, VW-powered plane over the parade at low altitude makes me break out with cold chills. Even if we’d gotten permission, I still wouldn’t do it.

But they did want to have Mark Pierce in his Graham Lee Nieuport 11 replica and Sharon (my Sweetie) in her Airdrome Aeroplanes Morane-Saulnier “L” Parasol replica in the parade. They had even found us a place to put them together and take them apart before and after the parade. You’ve gotta admit, having an actual flying aircraft, not just a big model, coming down the street is a unique thing to see. 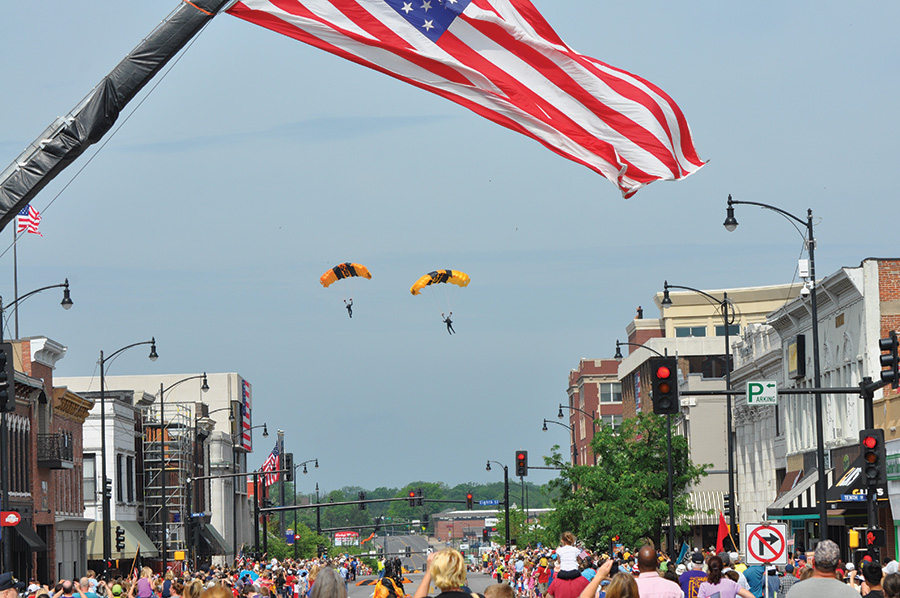 The U.S. Army Golden Knights start their descents into their landing spots. Each one landed right in the middle of the street…in a strong crosswind! 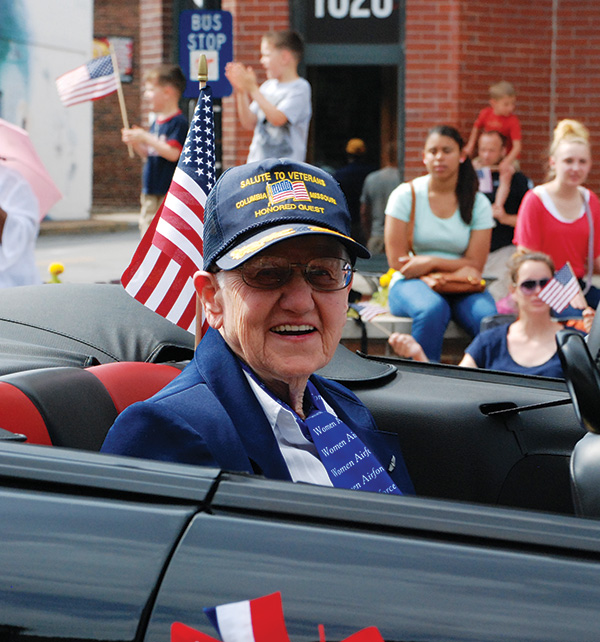 Pat Young was in WASP class 44-W-1. In high school she had to write a letter about a vocational interest and communicated with Amelia Earhart, who advised her to read her book. She did. It wasn’t long after that she started flying lessons. Her WASP flying was in PT-19s and BT-13 Vultees. At the 2010 Salute to Veterans Honored Guests and Volunteers Banquet, Mrs. Young received her bronze replica of the Congressional Gold Medal that was presented by a grateful nation to all the WW-II Women Air Force Service Pilots (WASP). Pat is an honorary member of the Dawn Patrol and comes to all our functions

I wanted to be in the parade, too! Why should Mark and Sharon have all the fun? No one would know my replica 1915 British “Trench Cat” liaison bike wasn’t really authentic. (My Trench Cat is actually a Walmart Baja “Doodlebug” scooter highly modified with a big engine upgrade (2.5 to 6.5 hp), step-down gearing, and the addition of a custom-designed sidecar and some other cosmetic enhancements to try to make it look original. It works for me.) I was doing my best to convince Richard that The Trench Cat belonged in the parade, too.

2014 was going to be our second year in the parade. But instead of Sharon’s Morane being towed by a “Deere,” she was going to be towed by John O’Connor and Dave Laur’s replica 1915 “American Field Service” Ford Model T ambulance. How neat is that?

We’d learned a lot from being in that first parade in 2012. The only problem we’d had was the downhill run on some of the steeper hills we encountered on Broadway Street. We’d just tied the planes onto the two garden tractors (nothing runs like a Deere!) that were towing the planes with lengths of rope. Since both planes are taildraggers, the pilots couldn’t see the narrow tow vehicle. Several times the drivers of the tractors had a prop nudging them in the back. Either that or they’d suddenly have an engine peeking over their shoulders like a big happy Labrador retriever wanting to know what was happening, where they were going, and when were they going to get there. 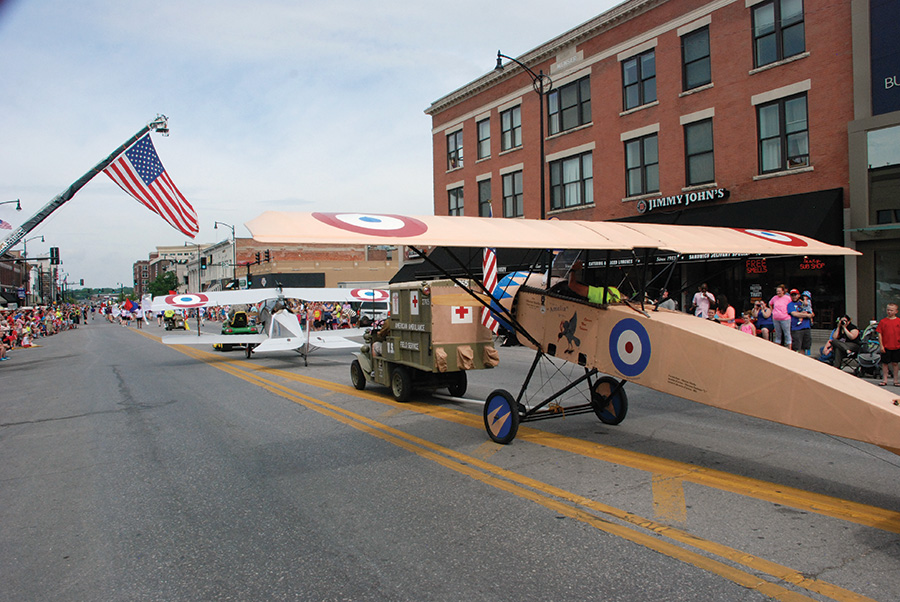 So, the tractor driver would be driving with one hand and trying to stay in the middle of the street so an airplane wing wouldn’t knock the heads of the spectators lining the sidewalk. His other hand was occupied trying to keep the plane’s engine out of his ear. It made for interesting viewing for the crowd. There was also some pretty creative screaming and yelling between the pilot of the plane and the pilot of the Deere. It just added to the entertainment factor. 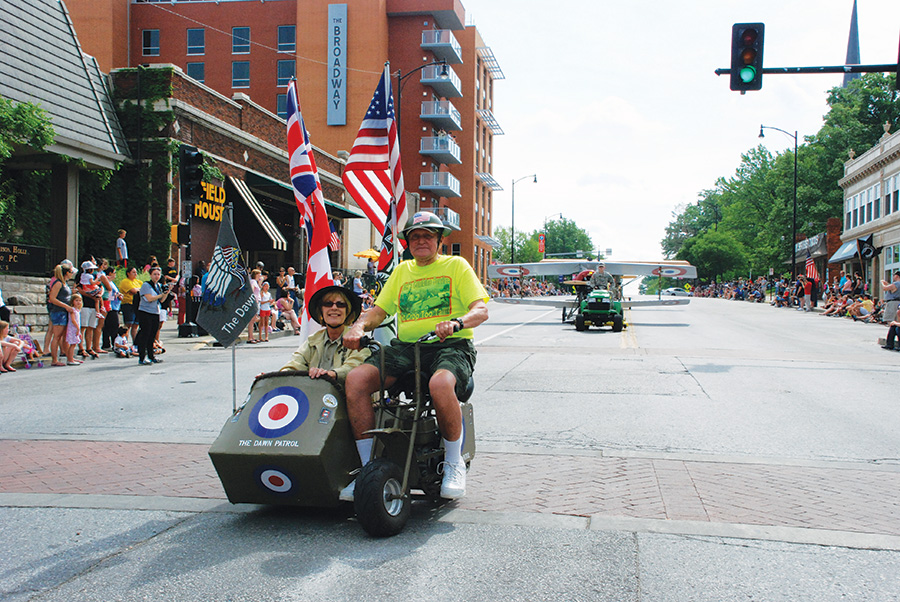 Brenda Pierce and Dick Starks in the 1915 replica Trench Cat lead the way with Mark Pierce’s Nieuport 11 and Sharon Starks’ Morane bringing up the rear.

Through all this the Trench Cat was providing roving “top cover” for the planes. Whenever we got to a narrow spot in the road, the Trench Cat dove in and out from side to side to keep the wings from hitting poles, trees, marching band members, and other obstacles that might be encountered on the route. Brenda Pierce (Mark’s Sweetie) was riding shotgun in the sidecar, keeping watch behind us for any problems with the planes. 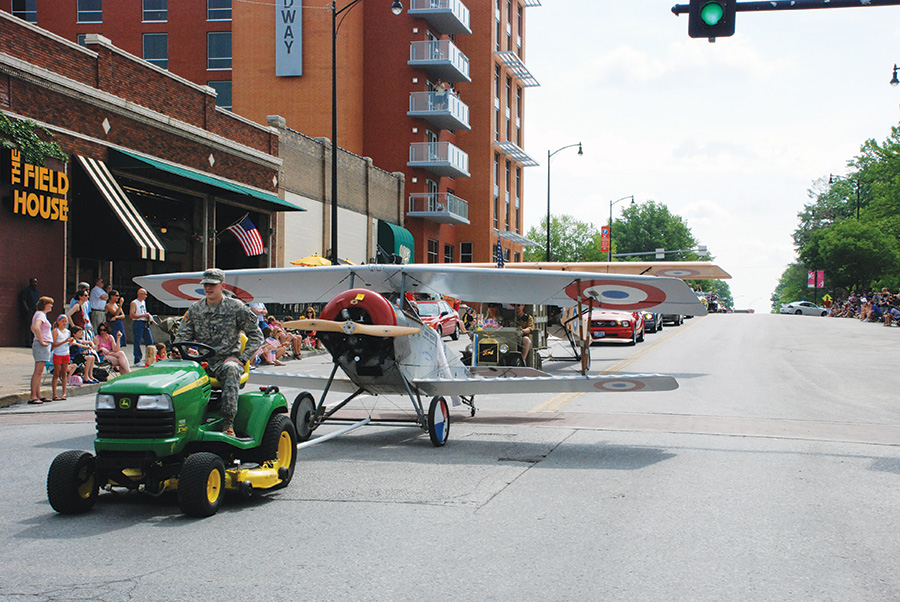 We’d learned from that first parade in 2012. The 2013 parade was cancelled at the last minute when a Giant Missouri thunderstorm formed east of Kansas City and headed toward Columbia, with howling winds, hail, and driving rains. When the edge of the storm reached Boonville, they called the parade off and everyone ran for cover.

This year we’d refined our towing rig to make sure that the plane would not run over the tow vehicle. We’d run the towrope through a 12-foot piece of thick-wall PVC plumbing pipe. It took some tugging and grunting to get the rope as tight as possible between the plane and the Deere and ambulance, but it worked like a charm. We made the whole route without a single hitch. 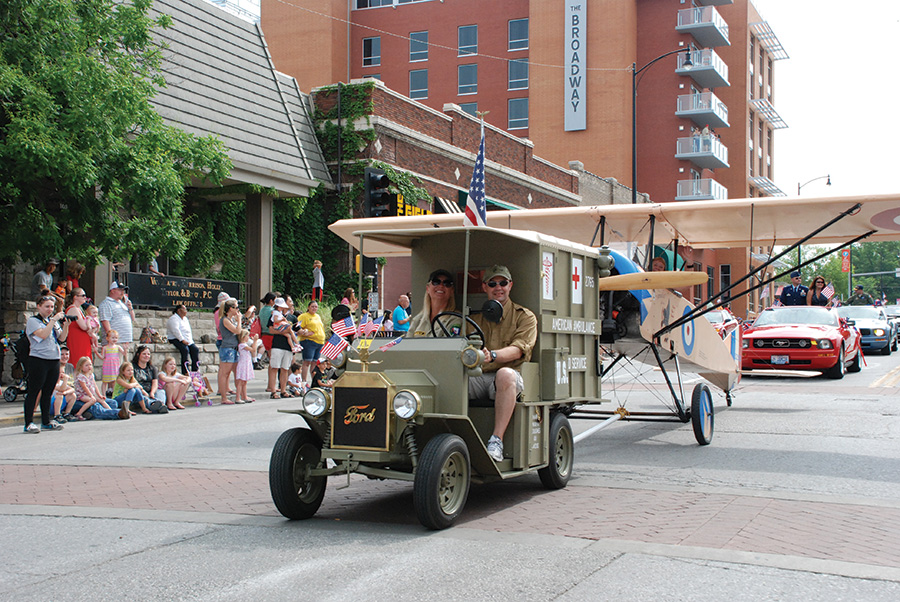 The parade starts off in an unusual way. The US Army Parachute Team, the Golden Knights, open the parade by jumping into the middle of Broadway Street. If I hadn’t seen it, I wouldn’t have believed it. These nerves-of-steel guys were jumping from waaaay up there and landing “in sequence” in the middle of Broadway-in a stiff crosswind, too, I might add. They made it look easy! I don’t know about their pucker factors, but mine was right up there in the higher numbers, watching them come in to land while dodging light poles, buildings, and spectators in the exuberant crowd.

The WASPS of WWII

The parade in 2014 had 93 separate units. After the Knights had landed, the parade started off with the Boone County Fire Protection District Pipes and Drums, led by Pipe Major Ken Hines, the voice of the airshow and an Airdrome Aeroplanes Nieuport 28 builder. The Boone County Fire Protection Pipes and Drums were followed by marching bands, floats, honored military guests in separate cars, Tuskegee Airmen and WASP reunion groups, military vehicles, veterans organizations, and the “piece of the resistance”-two WW-I airplanes, a WW-I ambulance, and the Trench Cat. The police estimated that over 20,000 people were lining the parade route for the 2014 parade.

This year it went just swell! No props were stuck in tow drivers’ ears. No heads were knocked together in the crowds. It was a non-event (disastrophe-wise). We reached our final destination, put the birds on their trailers, and headed back to Liberty Landing International Airport. We’re hoping we’ll get asked to be in the parade again in 2015.

I just had one of those dj-moo moments. If anyone had told me 28 years ago that Sweetie and I would have our planes and “stuff” in a parade down Broadway Street in Columbia, Missouri in front of thousands of people…I’d a told them they’d had enough and, if they’d give me their keys, I’d drive them home.