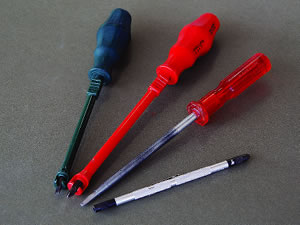 In a recent column I wrote about screw-head forms: Phillips versus straight versus Torx, and I lauded the Torx for its ability to hold the screw in a horizontal position. Thats fine, but what if you prefer a more traditional form? What if you want the screw to stay attached to the driver regardless of its orientation?

I rummaged around in the toolbox and found four such drivers that will do just that. Actually, these are more correctly called screw-starters, though one style will do both functions. All of them have their advantages and disadvantages, but one is clearly superior.

Every so often we come across a tool that is inexpensive, easy to use, and so useful that once you’ve used it, you’ll wonder how you ever got along without it. Such is this little gem from SteinAir. Its a wire spoon, and if you’ve done your instrument panel, you’re familiar with the annoyance of trying to add a wire or two to a nice, neat tie-wrapped bundle. Do you just strap the new wire on? Do you cut all the tie-wraps? Not with this little guy. Just slip it into the bundle under the tie-wrap, slide the new wire down the slot, pull out the spoon and pull the new wire into place. It will look like it was there from the start. I love it! Its available from www.SteinAir.com/tools.htm for $11.50. 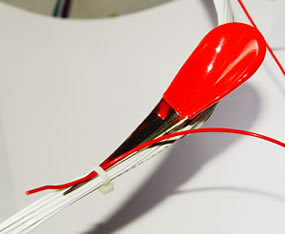 Take a look at the photos that accompany this article. Go ahead, Ill wait…Good, you’re back. From the handles you can see that the red and green starters are from the same manufacturer; green is for #2 Phillips, and red is a quarter-inch straight blade. You can also see that while they hold the screw very well, they’re limited to a #8 screw; anything larger wont fit in the slot. They also have a lower limit of about #4; less than that and the head will fall through the slot. Counter-sunk screws will fit, but only within those ranges. They will, of course, also function as drivers, but that gripping mechanism is a bit large for confined spaces. Interesting, but not recommended.

The double-blade version of the screwdriver has been a favorite for many years. It works on straight slots and accommodates a wide range of screws. Note that the screw it is holding cannot be started with the green tool, because the head of the screw is too large to fit within the greens slot. I was able to use the double-blade on a special screw with a head that was three-quarters of an inch in diameter. The double-blade cant be used to tighten the screw, though, because you will twist its two blades out of alignment. Recommended, but only for straight-slot screws. Snap-on lists it for $11.25 under part number YA355.

This gem comes in eight variations from Snap-on. The one shown is GA199A and sells for $12.90. It is definitely something you should have in your toolbox.

The last one, small, is double-ended. One end works on straight-slot screws, and the other end accepts Phillips screws. It also covers a wide range of screw-head diameters and is not limited by the thread size. Its body is only about a quarter-inch in diameter, so it will work in confined spaces and its quite inexpensive. Use it for starting screws, but not for tightening them. Its equally useful in grabbing a screw that, if fully removed, would fall into an inaccessible hole. Just loosen the screw with a standard driver, cock the mechanism, push it against the screw to trigger the grip, and turn out the screw.

Every year, your local Sears store is replenished with some pretty neat tools. And while there’s no denying that aircraft-grade and aircraft-specific tools are a must, we use a significant number of off the shelf items that you could just as well buy from Sears under the Craftsman name as covet from the Snap-on truck.

For this year, Craftsmans line bulges. Take, for example, the new line of digital torque wrenches. Available in 3⁄8-inch and 1⁄2-inch drives, the torque wrenches use strain gauge technology and are rated at +/- 2% clockwise and +/- 3% counterclockwise. Preset the desired torque, and colored LEDs will guide you there, along with an audible beep (better than an inaudible beep, we say) to help you find the set point without looking. The smaller torque wrench, good from 10 to 100 foot-pounds, is $199.99; the larger, with a range of 20 to 200 foot-pounds, is $244.99. Power comes from four AAA batteries or your hangar mates envy.

Organization and convenience items could help speed the build…at least thats what you can tell the spouse. Craftsmans new Air Tool Organizer set helps keep your, ah, air tools organized. The assembly is made up of a heavy-duty pegboard mount ($59.99), a side tray ($39.99) and the organizer ($39.99), which has four couplings to stage your air tools. No more having to say, Honey, hand me the 3X rivet gun, please.

Airplanes are big, and its a pain to walk back and forth across the hangar or workshop to your massive tool chest. Heres where the Portable Automotive Service Tray ($99.99) comes in handy. Wheel this adjustable-height (34 to 47.5 inches) device right next to the airplane, where itll faithfully contain up to 75 pounds of your stuff; it includes tool slots and non-slip liners.

Craftsman tools are widely available, but check the web at www.craftsman.com for all the cool stuff.