UAV Navigation typically builds sophisticated avionics for aerial drones and military aircraft, but has recently branched out to create a touchscreen and/or joystick controlled EFIS suitable for experimental and light sport aircraft.

The EFIS, which has been tested under Red Bull Race conditions (+9gs and +230 kts), has an extremely sensitive AHRS unit depicting attitude, airspeed, altitude, side-slip, trajectory vector, heading and roll rate. The HSI screen shows a standard two needle complete navigation solution, including distance to waypoints, current position, TAS, groundspeed, and wind, all computed from an internal 12-channel GPS. The EFIS also doubles as a complete flight logging instrument, recording parameters such as lat/long and gs pulled, all of which can be downloaded with a standard SD flashcard.

The EFIS fits in a standard 3.125-inch instrument panel hole, making it a good candidate for a “glass” upgrade to an analog experimental aircraft panel. UAV has priced the units at $4,000, with an additional $1,200 for an engine monitoring component that can handle the sensors for most four and six-cylinder engines. 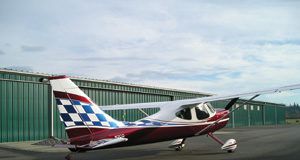 Barnaby Wainfan - November 18, 2008
0
In order to bank the airplane and execute a turn properly, adverse yaw must be countered or eliminate altogether. The discussion of how to do this includes rudder control, aileron-rudder interconnects, directional stability, differential ailerons, aileron drag and the use of spoilers;