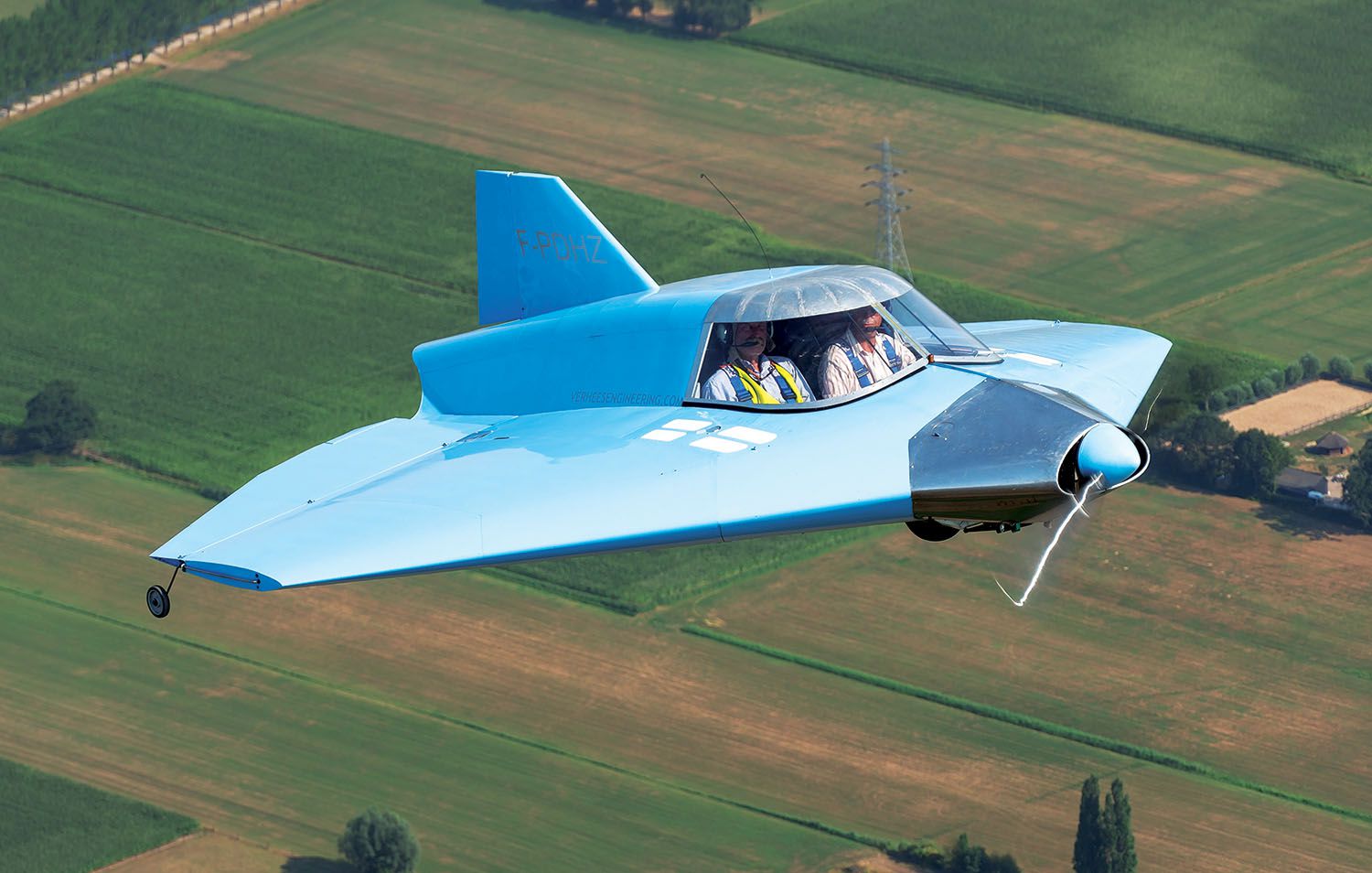 Is there a U.S. market for a two-place homebuilt with a spacious cabin, 135-knot cruise speed, eight-hour-plus endurance and a generous payload capacity? And you can sleep in it! Sounds like any of the new “outback-ready” utility designs that owe more to Mr. Piper’s Cub than the space age.

This airplane is no such Cub clone, and it’s no paper tiger. It exists, and its designer has better than 450 hours of flight time on the first example, including a nonstop flight from France to Portugal. And as you can see from the pictures, the Verhees D2 looks eye-catchingly… unusual. Whether that is a good or bad thing is your individual choice.

Bart Verhees is a Dutch aeronautical engineer living and working in Belgium. Around the time of the 100th anniversary of powered flight, he began to take a measured, engineer’s look at the history of aircraft configurations. Noting that today’s “standard” airplane stems from Louis Bleriot’s 1910 designs, we are used to seeing a long fuselage and tail feathers for stability, a tractor engine/propeller that keeps the landing gear legs relatively short and improves crashworthiness by keeping the largest mass of the airplane up front, a convenient blend of the minimum takeoff speed being only slightly greater than stall speed and relatively easy implementation of high-lift devices such as flaps on trailing edges and slats on leading edges. It’s been the winning formula for a long time, but with a few exceptions along the way.

Verhees’ view is that Bleriot’s genius did not bode well for future aircraft in terms of cabin space (limited because the fuselage had to be kept thin to cut down drag), inherently dangerous stall characteristics and aerodynamically costly drag from the interaction between fuselage and tail. But those deciding on an airplane to build have grown accustomed to those limitations, to the point that they are accepted as a given.

Some of these downsides are improved with a canard configuration (as championed by Burt Rutan with his numerous concept designs), Verhees observes. But “every advantage has its disadvantages,” he wrote. With a pusher-prop canard configuration, takeoff speed is higher than stall speed, compromising runway performance. It’s more challenging to add high-lift devices, propeller efficiency suffers from the incoming air being disturbed by the fuselage, the landing gear legs need to be longer in a pusher configuration, and crashworthiness is compromised with the heavy engine behind the cabin.

That steered Verhees to something different—not new by any means, but still unusual, especially in a light airplane with relatively low airspeeds. Delta-wing planforms have been used on some of the best-known and distinctive aircraft in history, including the British Avro Vulcan bomber, the French Dassault Mirage fighter, the U.S. Convair F-106 Delta Dart and, likely most famous, the Anglo-French Concorde supersonic airliner. The concept made similarly singular news in the amateur-built world with John Dyke’s Delta.

Among the top advantages for a delta-wing design in the lower speed range is the amount of space inside and weight-and-balance flexibility. Before beginning work on the two-place design, Verhees built the single-seat D1, which has flown successfully more than 1100 hours. But the single-seater doesn’t take advantage of one of the prime benefits of the delta-wing configuration: expansive interior space. A look at Verhees’ “wish list” for his dream aircraft gives further insight into why he opted for the delta-wing advantage for the two-place aircraft.

Understanding the trade-offs that come with any design, Verhees first determined that, for a number of reasons, he wanted to work in aluminum. Then he targeted the following specifications and performance: 135-knot cruise speed, 32-gallon fuel capacity, 550-pound empty weight, 1300-pound maximum takeoff weight (750-pound useful load), Light-Sport-level fuel consumption (a 100-hp Rotax 912 burning 4.2 gph for around 800 nautical miles of range with reserves) and forgiving stall characteristics. Not surprising for a European, Verhees also designed in grass-runway capability and folding wings for easy road transport.

The aerodynamics of the delta-wing configuration are unusual. Verhees says, “Tailless designs need sections with pitching moments nose-up. Together with a center of gravity that is ahead of the aerodynamic center, it gives a stable aircraft. There must always be an aerodynamic moment keeping the tail down.” With increases in airspeed from inadvertent descents, he wrote, “aerodynamic forces will win over the mass forces and put the tail down—and vice versa.” With a (symmetrical) NACA 63018 airfoil at the root and 63010 at the tip, Verhees says, pitch-up comes from upward deflected elevons—more so at slower speeds.

To quote him directly, “The aerodynamic center with zero pitch moment is at one-quarter chord with every section. The delta has a tapered wing with sweepback; some of them have multiple sweepbacks. So, finding the aerodynamic center is not so easy. If you take the quarter-chord line and take into account every lift distribution along the span as [the] equivalent of the chord, things can go wrong because the lift distribution is not proportional with the chord. There are parts of the wing that have a higher load than others. This depends on the planform.”

Center of gravity is not so critical, he says, because of the wide chord. Still, he recommends launching flight tests with a forward CG “to be sure of positive stability.”

For a variety of complex aerodynamic reasons (Bart would be happy to elaborate for you—his English is very good), stall behavior in designing a delta-wing configuration requires specific attention. “The delta wing is not so safe when it comes to stalls. [It] will first occur somewhere between half span and the tip, resulting in a wing dip and spin. This unsafe stall behavior is counteracted in the D2 by making the planform more elliptical and placing the elevator at the outboard section of the wing.”

Designing efficiency into the delta-wing configuration is possible, but “not a certainty,” according to Verhees. Because flaps are not an option with the wing planform, wing area has to be larger than for a conventional design, resulting in greater induced drag. That’s counterbalanced by the lighter structural weight and the lack of a drag-inducing conventional fuselage with all its junction points. “The D2 at 100 km per hour [54 knots] takes the same power as at 220 km per hour [120 knots]. Because it is a fast aircraft, a relatively big engine is necessary,” wrote Verhees. The big engine and the light weight compensate for the higher induced drag when flying slowly, he says.

The especially good news is that, unlike most aircraft, the D2 is increasingly efficient at its higher speed ranges. He says it will burn just 4.2 gph at 120 knots, but still only 4.8 gph at 135 knots. Verhees points out that, if all the available useful load were used for just a pilot and fuel (with auxiliary tanks), the D2 would be capable of 18 hours’ endurance, enough for a nonstop trans-Atlantic flight.

Also convenient, says Verhees, “The D2 has the same performance with [an] almost empty tank and without luggage [as it does] with full tanks and luggage, due to the tanks and luggage being aft of the center of gravity.” And for those contemplating long flights in IFR weather, the D2’s behavior in turbulence is ”much nicer” than conventionally configured aircraft, says Verhees. “In an updraft, most aircraft tend to raise the nose and the speed [drops]. A delta reacts the other way.” The correct response to an updraft when flying the D2, he says, is to lower the nose, helping maintain the desired altitude.

The overall structure consists of the load-bearing “frame,” made up of  the front and rear wing spars, the cockpit area and the “tunnel” with retractable, steerable nosewheel and the rear main wheel. This is made of riveted aluminum angle and sheet. Those main structural components come together at the firewall. Wing ribs, fairings and other aerodynamic shaping are largely accomplished with foam ribs glued to the aircraft skin. Large numbers of such foam shapes enable lighter-gauge skins, helping keep empty weight down. The spars are hinged at the wing-folding points. As with many gliders, small tipwheels support the wingtips during ground handling, which Verhees says is easy with the large, steerable nosewheel. The canopy can be opened for taxiing.

Flying the D2 is “straightforward,” according to Verhees, with some specific differences from more conventional aircraft. Learning stick position during takeoff “has to be learned by doing,” he says. Too much back pressure compromises lift, causing the “aircraft to stick to the ground until the speed is high enough.” Forward pressure would lift the tail and possibly induce a bouncing takeoff, “although not in a dangerous manner,” he says. Liftoff should be at around 46 knots, climbout at 65 knots.

Verhees says the controls feel “rather heavy for such a small aircraft,” with “excellent” pitch stability through the whole CG range. “It is a real traveling aircraft,” he says, “The spacious cabin lets you move your arms freely. You can take off or put on your jacket while flying or [have] a cup of coffee.”

Minimum controllable airspeed at maximum gross weight is 46 knots and as low as 38 knots at lighter loadings. In a stall, Verhees says, the aircraft starts shaking. With a forward CG it will mush down with a nose-high attitude. In an aft-CG situation, a wing can dip, he says. The stall occurs at a 30° angle of attack, he notes, “so this will not come as a surprise for the pilot.”

Verhees described landing the D2 like this [kilometer-per-hour figures are converted to knots]: “Care must be taken on downwind to keep the speed up at, say, [81 knots] to prevent the aircraft from losing speed. Under [65 knots] the drag curve goes up again. When the speed drops to [54 knots] a lot of power is needed to maintain altitude and build up speed,” though he says it is possible to power out of a stall without losing altitude, even at maximum gross weight.

Final speed is 65 knots, a bit higher in turbulence. “At this speed, the view over the nose is OK. There is a direct relation between stick position and speed, while an aircraft with a tail can suffer from slipstream effects from the wing over the stabilizer.

“Crosswind correction can be done way before touchdown, like with a jet fighter. There is little banking necessary when applying rudder. Round off can also be done quite high, and the D2 descends nicely to the runway.”

Verhees describes the ideal candidate for the D2 in the U.S. as someone who wants a good traveling airplane—that they can sleep in. “It’s not aerobatic, so it’s probably not for an RV builder.” But for someone looking at a Long-EZ, say, who would prefer working with aluminum rather than composite, he said his airplane might be tempting, especially with its generous cabin dimensions.

Verhees makes no secret that he would like to find a manufacturer in the U.S. who will partner on producing kits for the D2 on this side of the Atlantic. “I’ve seen some interest, but nothing serious,” he said. (You can reach him at info@verheesengineering.com.) While the D2, like the Dyke Delta, is undoubtedly a niche design, Experimental aviation has a long history of “niche” designs that found a home in the mainstream.

Paul Dye - November 26, 2021
0
Taking a closer look at “off-nominal” flight experiences and what to do about them.