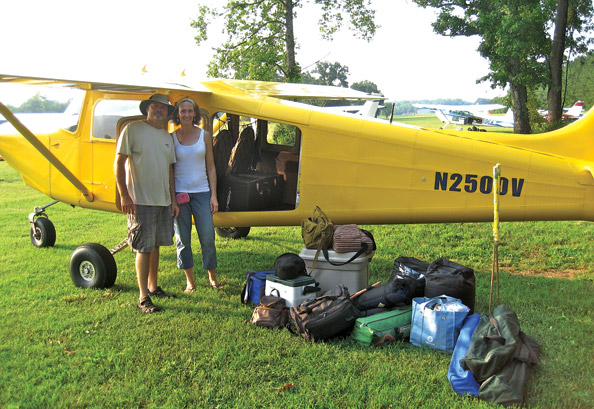 Last month we began a look at how the weight of an airplane can grow faster than expected. This time we continue our discussion of weight with a more thorough look at how weight growth can affect performance.

The weight of an airplane affects its performance in all phases of flight. On takeoff, the thrust generated by the engine must accelerate the airplane from rest to liftoff speed. Once airborne, the airplane must climb, in effect lifting its mass up a hill against gravity.

In level flight, the wing must produce a lift equal to the weight of the airplane, and the wing generates induced drag in the process of producing the lift necessary to keep the airplane airborne.

We will look at the effect of weight growth on each phase of flight in turn. For purposes of example, well use a hypothetical single-engine airplane characteristic of a four-seat, cross-country machine. Our example airplane has the following basic characteristics:

We will look at the effect of a 10% gross weight increase (300 pounds) added to the empty weight of the airplane.

In order to take off, the airplane must accelerate from a standstill to liftoff speed, and then climb over a 50-foot obstacle. Figure 1 shows the effect of increasing weight on the takeoff performance of our example airplane. Both the ground roll and the total distance to clear the obstacle are shown. The 10% (300 pound) increase in gross weight increases ground roll by almost 300 feet, and the total distance over the 50-foot obstacle increases by just over 450 feet.

Notice that the takeoff distance increases by a percentage that is much higher than the percentage weight change of the airplane. The 10% weight increase causes a 26% increase in total takeoff distance. The reason for this is that the weight increase introduces several penalties at once. As the airplane accelerates for takeoff, the acceleration is determined primarily by the thrust-to-weight or power-to-weight ratio. Increasing weight reduces acceleration. It takes longer to accelerate to a given speed, and the airplane accordingly rolls farther doing so. Increasing weight also increases wing loading, which in turn makes the stall speed higher. This means that the liftoff speed will be faster as a result of the increased weight. The heavier airplane must now accelerate to a higher speed, at a lower acceleration rate, than before. This introduces a double penalty in ground roll.

Once the airplane is airborne, the increased weight hurts rate of climb, thus increasing the airborne distance between liftoff and the point where the airplane reaches 50 feet altitude.

For a given excess power, the rate of climb is inversely proportional to weight, so an increase in weight hits the climb rate twice-first by reducing excess power and second by forcing that reduced excess power to tow more mass up the hill.

Range can be affected by changes in empty weight in two ways, as illustrated in Figure 3. If the gross weight is held constant, and fuel is offloaded to compensate for increases in weight elsewhere, the effect on range is dramatic. Our example airplane carries 300 pounds, or 10% of its gross weight, in fuel. If the zero fuel weight of the airplane were to increase by the same 300 pounds used in our takeoff and climb examples, the airplane would be unable to carry any fuel and maintain its original gross weight. While this is extreme, the point is that trading fuel for weight elsewhere to keep gross weight constant reduces range rapidly as excess weight increases.

The other curve on Figure 3 shows what happens to range if we hold fuel constant and allow the gross weight to rise. Our nominal 10% gross weight increase reduces range by about 10%.

Figure 4 shows the effect of weight increase on landing distance. Increased weight increases approach speed, and also increases the amount of energy the brakes must dissipate to stop the airplane. Increasing weight does not change the airborne distance between the point where the airplane clears the 50-foot obstacle and the point where it touches down, but the 10% weight gain increases the landing ground roll by about 10%.

As we can see, weight increases hurt performance over all phases of the flight. The most dramatic penalties are to takeoff and climb performance. This becomes even more pronounced if the airplane has relatively low power for its weight. Density altitude also exacerbates this effect. The large, nonlinear relationship between weight increase and loss of rate of climb and takeoff performance, combined with the reduction in engine performance caused by high density altitude can be deadly. An airplane that will tolerate, albeit sluggishly, an over-gross condition at sea level may be dangerously short of climb on a hot day or at a higher-elevation airport.

Homebuilders need to be particularly on guard against creeping weight growth. The temptation to add equipment, interior appointments, fancy finishes and structural beef ups can add a lot of weight quickly, to the great detriment of performance.