I’m not proud. I’ve done a lot of go-arounds in my career, and I’ll do one on my next flight if the occasion warrants. A lot of busted airplanes have resulted from trying to make a landing work, regardless of the situation. 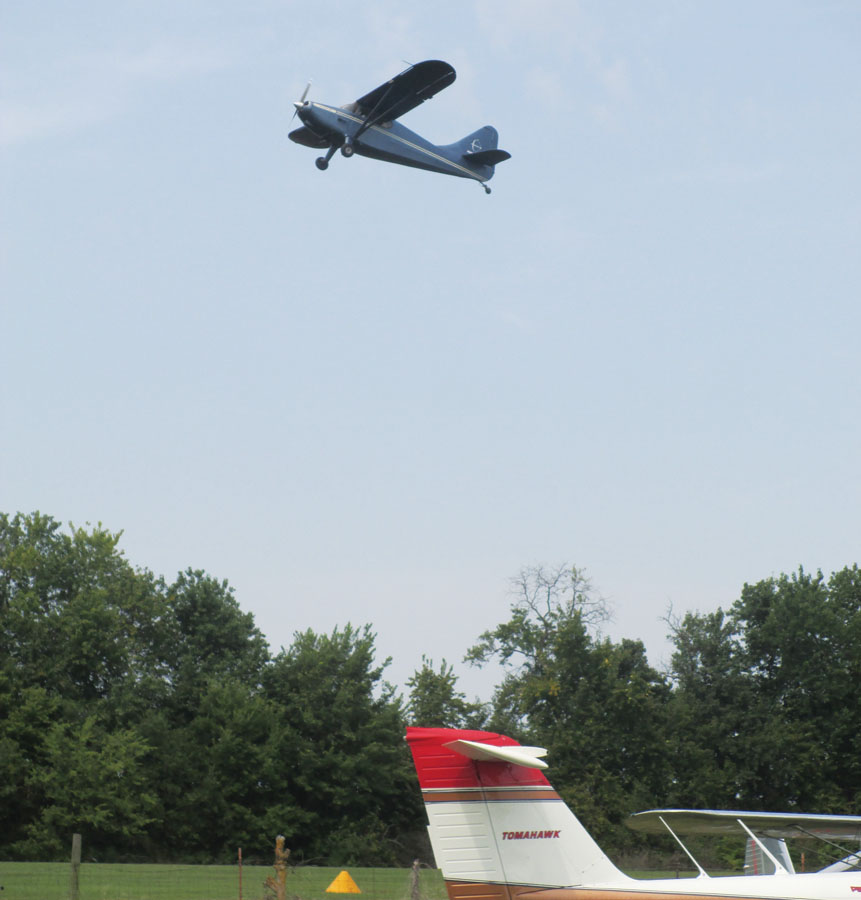 Back during my Army Aviation affiliations, our unit was equipped with Cessna O-1A’s (aka L-19A, Cessna 305), spunky little taildraggers weighing 2400 pounds with 213 takeoff horsepower and a 90-inch climb prop. As a liaison airplane, it was designed to live with the troops, landing and taking off wherever it was needed. Our temporary “tactical airstrips” were spec’d at 800 feet of unimproved length, obstacles permitting. I watched a lot of our retreaded WW-II and Korean War liaison pilots make go-arounds at these strips; I figured if they weren’t ashamed to take a wave-off, neither was I.

Like any other flying task, go-arounds require planning and practice. They must not be learned at the last instant—on the fly, so to speak. A go-around should not be thought of as a mark of failure, but rather as a normal maneuver to be used when needed. And it will be needed at some point. I can almost guarantee that a go-around will be necessary at some point during Phase 1 testing of a new homebuilt.

We execute a go-around to avoid a landing situation that carries a probability of harm to ourselves or the aircraft. Each approach to a landing should be viewed as having an optional outcome. If the airplane is under control, stabilized, and likely to land in the first few hundred feet of a welcoming runway, we’ll carry through with the touchdown. If not, we’ll transition from our final approach configuration into a climbing condition, just as we planned.

Sometimes it’s the runway itself that requires a go-around. I remember lining up to land at a prairie airstrip that I wanted to add to my logbook, only to spot some wooden stakes bearing cloth flags at the last second, concealed in the taller-than-expected grass. The place was marked off for construction of a new paved runway. A hasty go-around kept me from becoming impaled on the grade stakes.

So, if you see a problem with the landing area, don’t try to skim over it and land with an unknown amount of pavement. That would involve some tricky flying at slow speed, close to the ground; it’s best to add full power, clean up the flaps and gear, and climb back into the traffic pattern.

An obstruction on the runway, like an animal, a vehicle, or an airplane that appeared out of nowhere, calls for a go-around. Night approaches are particularly subject to last-second aborts, when a hazard only shows up in the landing light beams. Doing a wave-off in the dark requires your full attention, using skills practiced during daytime.

If there’s a conflict with another airplane during the maneuvering to final approach, such as a rogue pilot on a straight-in who can’t be bothered with flying a traffic pattern, or someone who wants to shortcut the system by landing from an opposite-side base leg, don’t try to sort things out verbally on the CTAF. Abandon your approach by climbing away into unoccupied airspace, turn with the flow of traffic, and set up another downwind leg. Going around is safer than making S-turns or trying to match speeds. Formation join-ups should be done well away from the traffic pattern.

And then there’s the self-inflicted go-around. When I’m making my first arrival at a strange airport, I have to assume the first approach may not work out. Best efforts notwithstanding, it’s easy to wind up too high to land in the first-third touchdown zone. Don’t take out the fence at the departure end or blow a tire with a locked-up brake, just to prove you can always land the first time, every time. Watch for that motionless spot on the runway that marks your flare-out point (not where your tires will hit). If it’s beyond the zone that leaves beaucoup stopping distance, go around.

Similarly, if your airspeed is not stabilized close to the normal final approach speed, at or slightly above 1.3 times stall speed for your configuration, seriously consider going around. Those ten extra knots add too much to the stopping distance, especially when aided by drag-reducing ground effect after you flare out. Conversely, getting slow late in the landing approach is inviting a rough landing at best, or damage to the airplane at worst. If you’ve allowed the aircraft’s energy level to deteriorate, do a go-around and make another approach at the correct airspeed.

If your landing is headed for the runway lights or the infield grass because the wind kicked up on short final, it’s best to go around instead of trying to reposition. I once took a wave-off when I flew behind an airplane sitting innocently beside the runway, its tail aimed at my touchdown spot. I never dreamed he was doing a run-up to check his mags until I was suddenly scooted off the centerline as I passed behind.

Never assume you have the landing made, just because you are lined up in the slot. If the wind is blowing at a fierce clip, the last few feet to the ground can be full of surprises. Obstructions near the upwind side of a crosswind-oriented runway will generate “rollers” to push you off the centerline as you near the threshold. Even if the wind is aligned with the runway, expect a “sinker” on short final; friction effect slows the wind speed close to the ground, causing a loss of airspeed. If you don’t have extra airspeed to sacrifice, or it’s too late to shove up the power to regain energy, your best option is go around and be better prepared on the next attempt.

How To Do It Safely

Go-arounds come in various flavors, depending on when they are initiated. Obviously, it’s easier to transition from a landing approach before you’ve added final flaps or slowed to the stabilized final-approach speed. Pulling the airplane out of the hole when the tires are just inches from the pavement takes extra effort, struggling to rebuild airspeed while reconfiguring into a climb.

The most critical ingredient to a successful go-around is adding full power. Don’t be subtle; it’s better to use full throttle until getting a climb established, rather than to fly down the runway while sinking under partial power. A dirty airplane needs a lot of thrust to accelerate. If your plane has power restrictions to be observed, such as those with a fixed turbocharger wastegate or turbine-engine torque limits, practice go-arounds until you can add takeoff power without overshooting the redline. And if you have a controllable propeller, be in the habit of having the prop control shoved forward on final, so full power is available.

With the sudden application of takeoff power while trimmed for a nice slow, idle-power, flaps-down approach, you’ll be experiencing a rush of mis-trimmed control forces. Be prepared to oppose the trim change with lots of right rudder and extra elevator force. Concentrate on maintaining the correct attitude; don’t just steer blindly. Keep the nose on the horizon while reconfiguring, then bring the nose up to a climb attitude as soon as you have the correct airspeed. The airplane is not going to fly itself at this point—it needs a pilot who’s practiced for the large trim changes.

Once power is applied and control is established, reduce flap setting to half of the landing amount, roll off some trim to compensate, and then bring the flaps up to a climb setting as airspeed builds. Don’t change the trim first; retracting flaps will alleviate a lot of the trim force, so make the go-around a one-two-three procedure. Bring up the power, reduce the flaps, then make a trim adjustment.

If you have retractable gear, when do you reach for the gear handle? Only when you’re sure you aren’t going to need the wheels. Flaps normally generate more drag than the gear, and you do make takeoffs with the gear down, so there’s no hurry to swing the wheels up as long as there’s runway ahead. The exception is with twin-engine airplanes, which should be cleaned up as quickly as possible in preparation for the possibility of single-engine flight.

The most common mistake I see in go-arounds conducted during training is excessive climb-out airspeed. For some reason, all students leave the nose down on the horizon after cleaning up and go off the departure end of the runway at near-cruising speed, gaining little or no altitude. Your job is to climb away from the threat of terrain; establish and maintain VY until reaching pattern altitude.

Once the flaps and gear are up, take care of details like opening the cowl flaps, moving into a climb-out position to the right of the runway to keep any departing traffic in view, and making a radio call to advise the tower or other airplanes that you’re going around. Fly a normal takeoff profile.

The later the go-around is begun, the more challenging the transition will be to get the airplane back into a climb condition. If going around at the very last instant, just as the tires are about to touch, take care to remain aligned with the runway because you might inadvertently touch down during the reconfiguration process. This shouldn’t be a problem if you stay in control, but be aware. If you’re going around after you’ve already touched down, retract the flaps first, then bring up the power to avoid hopping back into the air with a sudden burst of power and lift, and then sinking back to the runway as the flaps come up. The touch-and-go procedure applies in such a case; reconfigure on the roll, then fly away.

If the wheels haven’t touched, leave the flaps alone until maximum power is applied, then clean up gradually and accelerate into level flight, seeking VX or VY. If you’re starting your go-around well out on final approach, or before turning onto final, you can afford to sacrifice a bit of altitude to hasten acceleration. Just don’t loiter at low altitude; get the climb going as soon as possible.

If you haven’t done a go-around on purpose for many years, or if you’ve transitioned into a different airplane, go practice them at a safe altitude, and then try one down at runway level. Be ready, by being prepared.

Flying Qualities and the Horizontal Tail

Barnaby Wainfan - January 22, 2009
1
An airplane's horizontal tail is critical to stabilizing the airplane in pitch, trimming out pitching moments caused by the wing and providing control power for maneuverability.