A major contributor to unexpected drag in light airplanes is the presence of gaps in the skin, which allow air to leak through and disrupt the airflow over the airplane. Gaps are a problem wherever parts, particularly moveable parts, join. These include control-surface hinge lines and ends, wing and tail attach points and doors of all sorts. Often this air leakage can be controlled with a very simple gap seal. 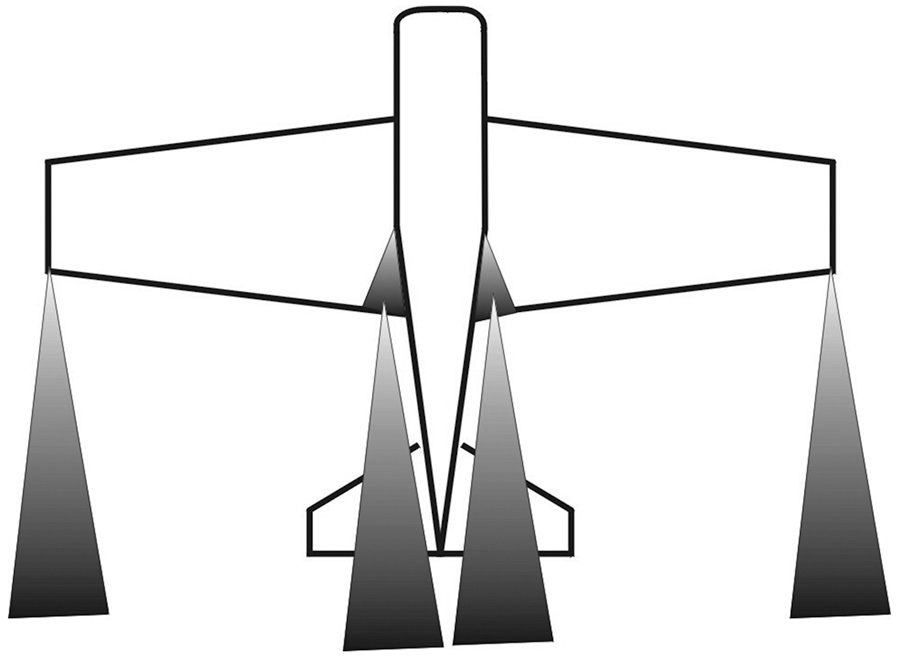 A gap at the wingroot causes a vortex pair that increases induced drag.

This air leakage can have several undesirable effects. First, as the air flows through the gap, it is slowed by friction and flow separation occurring inside the control-surface cove. This causes some drag. The air flowing up out of the gap on the upper surface of the wing also causes turbulence and disrupts the smooth airflow over the upper surface of the wing downstream of the gap.

The reduction of control effectiveness caused by air leaking through gaps at the hinge line increases the deflection required to control the airplane and increases the drag caused by control deflection. The reduction of aileron-control effectiveness due to gap flow can be particularly problematic at low airspeed and near stall, when the flow on the upper surface of the wing is close to separating.

Gaps similar to the gaps formed by control surfaces can exist between a retracted flap or slat and the fixed portion of the wing. This is particularly true if slotted or fowler flaps are used, since the leading-edge shape of the flap does not often match the shape of the wing in the area of the flap cutout. When the flaps are retracted, air can still flow from the lower surface of the wing, through the gap, to the upper surface of the wing. The same is true for poorly sealed leading-edge devices such as slats. This air leakage causes a drag penalty, which may be several percent of the total drag of the airplane.

Flow through a gap can cause separation and increase drag.

Ideally, there should be no control-surface gaps at all. While this is not practical in most cases, the airflow over control surfaces and retracted flaps can be improved with proper gap seals.

For most types of high-lift systems, it is possible to devise a seal so that the retracted flap or slat seats on flexible strip, like weather stripping, which keeps air from flowing through the flap gap. Another common aftermarket modification is to extend the lower wingskin aft to cover the gap between the flap leading edge and the cove in the wing when the flap is retracted. A seal like this eliminates the “trough” between the cove and the leading edge of a Fowler or slotted flap when the flap is stowed. Such seals do often produce a useful reduction in drag, but they also change the shape of the slot between the flap and the wing when the flap is extended. The seal can interfere with the flow through the slot and decrease the effectiveness of the extended flap. An airplane with this kind of gap seal may have lower drag in cruise but see some increase in flaps-down stall speed or drag. Aileron gaps on simple piano-hinge ailerons can usually be sealed by taping over the hinge line. Some aftermarket aileron-gap-seal kits use extensions to the wingskin to narrow or seal the gap between the aileron and the wing.

Care must be taken when adding any type of gap seal to make sure that the seal does not restrict the movement of the control surface. It is important to ensure that the seal cannot accidentally move into a position where it will jam the control surface. There has been at least one fatal accident caused by an aileron on a prototype airplane fouling the wingskin at the back of the aileron cove and jamming the ailerons. In this particular case, the clearance between the aileron and the cove skin was very small. Under load in a maneuver, the wing flexed enough to allow the aileron leading edge to catch and jam against the cove skin.

The use of tape to seal gaps must likewise be approached cautiously. If the tape were to peel away from the wing surface in such a manner that it stuck up into the airflow, it could act as a spoiler and cause a large drag increase and control difficulties. This is not just a theoretical possibility. It has happened and scared some pilots very badly. If tape is used to seal the gaps on a piano-hinged aileron, it should always be placed on the lower surface of the hinge—never on the top of the wing. Remember also that adding gap seals to a certified airplane without consulting the FAA and determining if an STC is required is illegal. Homebuilders have no such constraint but should still be careful to ensure that the gap seal cannot inadvertently become a menace.

If doors or canopies do not fit their frames snugly, gaps will form that allow air to leak around the edges. This can cause the inside of the airplane to become noisy, drafty or even wet if the airplane is flying in rain. In addition, this air leakage will cause drag.

An air leak not only disturbs the airflow right at the gap but causes turbulence downstream of the air leak. This increases the skin-friction drag of the entire area of skin downstream of the gap. This turbulence can also cause premature flow separation, which, if it occurs, will greatly increase drag. In general, it is a good idea to seal all openings in the airplane’s skin as well as possible. If this cannot be done then the opening should be designed to direct the leaking air downstream, parallel to the outside airflow.

Gaps at Wing or Tail Junctions

Many airplanes have flying surfaces that are removable or have manufacturing breaks in them. This can lead to the wing or tail having a chord-wise gap where it joins the fuselage or other wing panels. This type of gap is particularly common at the root of the horizontal tail when a variable-incidence tail is being used to provide trim, or when the airplane has an all-moving tail. A full-chord gap can have surprisingly large and undesirable effects on both the stability and drag of the airplane.

A chord-wise gap can increase both the parasite drag and the induced drag of the flying surface. The air leakage through the gap increases the parasite drag of the wing or tail the same way a control-surface hinge gap does: The leaking air disturbs the airflow over the area of the gap and causes drag-producing turbulence. The gap can also cause the induced drag to increase by reducing the effective aspect ratio of the surface.

A wing with a chord-wise cut through it tends to behave more like two lower-aspect-ratio wings flying in close formation. The ends of the gap act like wingtips and shed their own tip vortices. If an airplane has significant gaps at the wingroots, it effectively has two low-aspect-ratio wings instead of one higher-aspect-ratio wing. This will cause the wing to have a very low span efficiency and high induced drag. The gap size required to cause this effect is relatively small, and it is much more important to seal chord-wise junction gaps than any other type of gap on an airplane.

The gaps at the tail root will also lower the effective aspect ratio of the tail. In addition to increasing the induced drag of the tail, this will reduce the lift-curve slope of the tail. The reduction in lift-curve slope will cause the airplane to be less stable because the lift of the tail will change less with changing angle of attack. In other words, the gaps at the root will make the tail act as if it were lower aspect ratio, and it will not trim or stabilize the airplane as effectively as it would have if the root gaps were sealed.

If the airplane must have gaps at the root of the tail for some non-aerodynamic reason, a larger tail will be required to maintain any given level of stability. This will increase the wetted area of the airplane and increase its parasite drag.

The root fairings and gap seals are often among the last items to be fabricated if the airplane is a homebuilt project. It is tempting to fly the airplane immediately and add the gap seals to clean it up later. In the case of the seals at the roots of the wing and tail, this is not a very good idea. The combination of high induced drag and reduced stability may well place the pilot in a position where the rate of climb and/or pitch stability are both poor on the first flight. Proper sealing of the wing and tail roots is well worth the time it takes to build and install the seals.