Home Magazine Builder Spotlight When Noahs Ark was an RV-9A 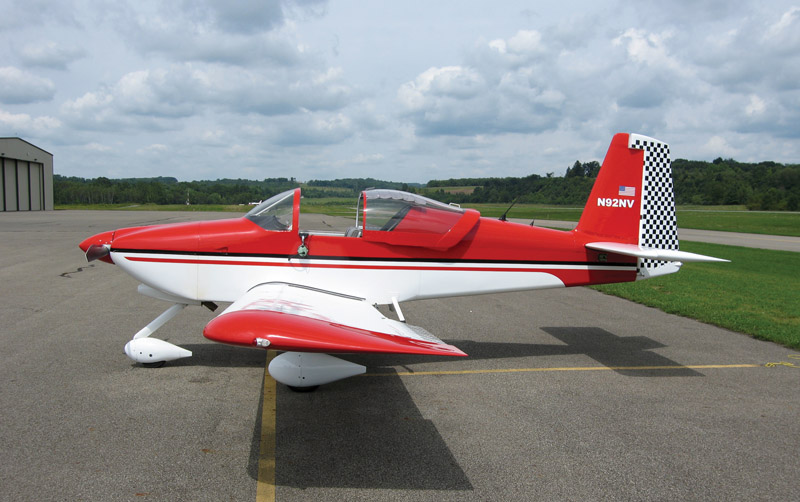 It was when my husband Bill was in the third year of his three-and-a-half-year building project that I realized the biblical account of Noah’s ark was only a rough outline of the event.

The instructions for the kit aircraft were a little longer than the ones for the ark, but I’m sure that Mrs. Noah’s journey began much the same as mine. After he heard from God, her husband must have walked around the house with a faraway look in his eyes. I can just imagine the first time he said to her, “I’m thinking about building an ark…” She probably took it well, replying with a simple, “That’s nice, dear.” She probably didn’t even stop watering her flowers. 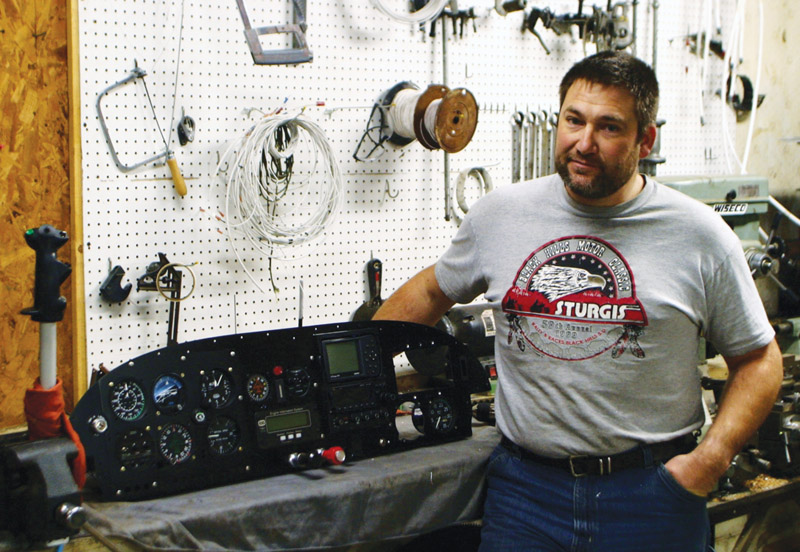 Bill poses after cutting the holes and installing instruments in the avionics panel.

Of course, Noah must have been a handy guy to start with, and it wasn’t his first project—or hers, either. She knew it wasn’t time to get alarmed. Maybe days, weeks, or months went by before she actually saw the blueprints. Almost before she realized it, men were hauling pieces of the ark into the yard. At this point it hit her—my husband is building an ark!

She wasn’t sure how she felt about the situation, but she knew from experience that she wasn’t going to stop him. Oh, she tried, and in a number of ways: First, she pouted. Then she complained about the wood shavings that covered his clothes and got tracked into the house each night. But pouts and complaints don’t deter a man on a mission from God. In self-defense she began to take up her own hobbies, like sewing. She burned the midnight oil and left bits of cloth and thread on the table, but he didn’t even notice. Finally, she threw down the gauntlet: What’s good for the gander is good for the goose! And so, she tried to outspend him. Every time he bought another length of cypress wood, she and her sister shopped till they dropped! She even charged a new stove and had it installed. There were some pretty big arguments about that one. 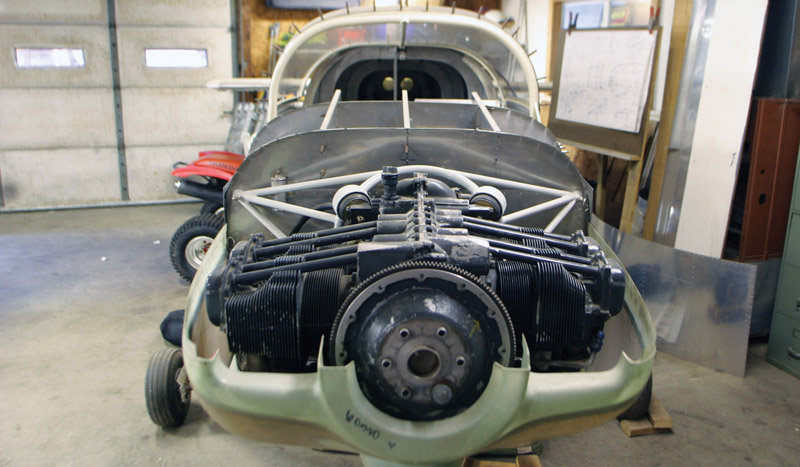 Fitting the lower cowl and engine. You can see some of the many pages of blueprints in the background.

It didn’t take long for a smart man like Noah to decide life would be easier if he got her on his side. It began with a request that she pick out the color scheme for the ark. Should there be a stripe along the side? He was clever. He began complimenting her patience in front of his friends, and she began preening. The clincher was when he put a sewing table and comfy chair next to his own workspace, so she could sew while he spent hours on the ark. She might not have actually caught the dream, but she was putting up with it.

It wasn’t long before her life was, well, a zoo. 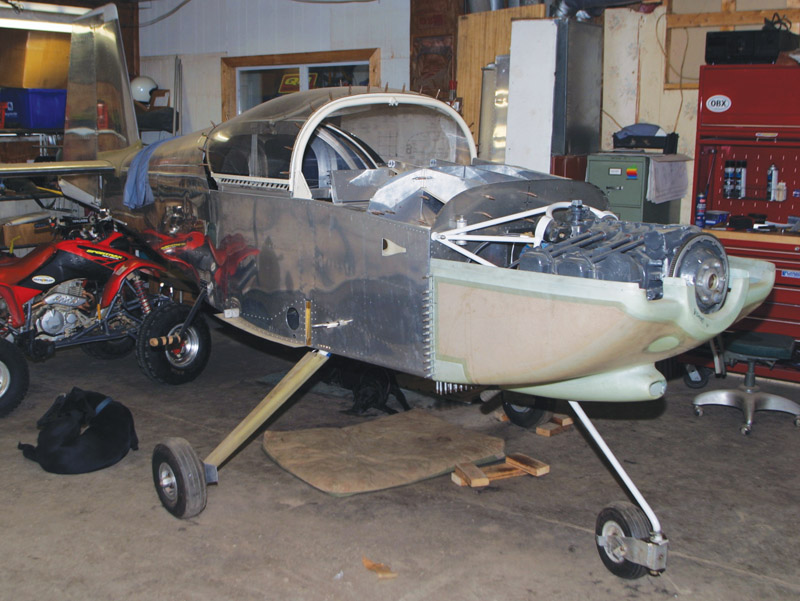 During the three-and-a-half-year building process, there were times that the project seemed stalled.

People were stopping by on a regular basis. Some were gawkers. Some were fellow “do-it-yourselfer” types. A few guys helped Noah cut a tricky corner. And before long, she was cooking extra food at mealtimes—just in case. Some nights she carried his meals over to the worksite and eventually found herself impressed once again with the man she had married. She probably even held a few boards while he nailed them in place. As the hull began to take shape one breezy, sunny afternoon, she laughed when he sat in it and pretended to steer. Those were good days. 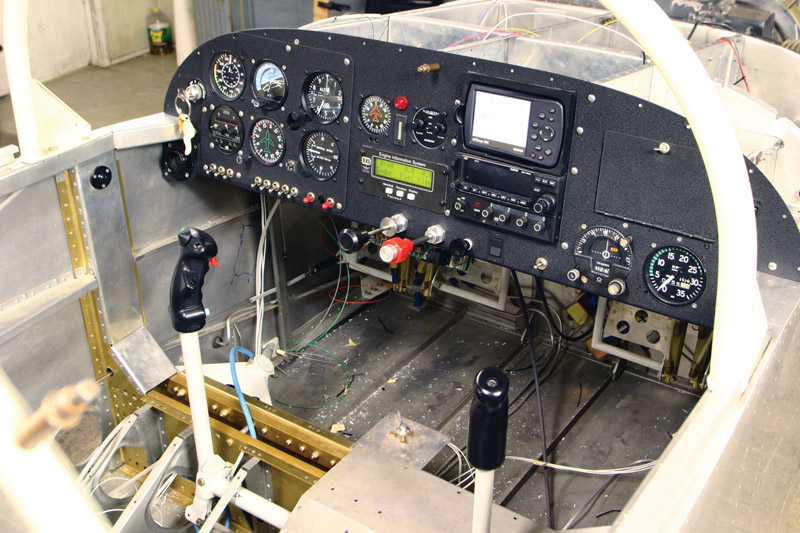 The aluminum shavings littering the cockpit floor are among the few that did not get tracked into our house!

But before long, both she and Noah were in the thick of things. The plans said, “It will be 50 cubits wide,” but didn’t say how to make the boards curve “just so.” She listened patiently, encouraged him, and knew he’d figure it out. Other times she just listened to the… musing…and kept her mouth shut. 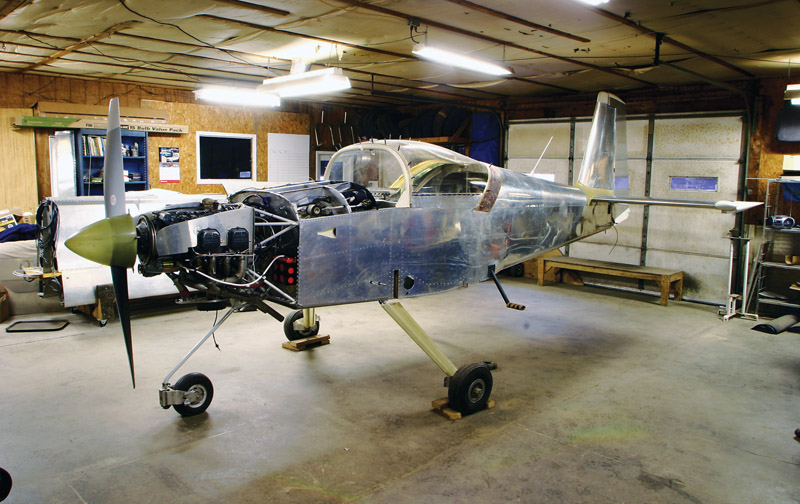 The engine is installed, the prop is on, and the completed wings in the background are ready to be mounted to the fuselage.

There was a time when the problems never seemed to let up. The bills for the parts were higher than he had imagined, and he never ate dinner with the family anymore. When her in-laws asked them over for dinner, she couldn’t commit because it depended on where he was in the project. He’d be like a bear with a sore butt if he had to stop at four o’clock to get cleaned up and go over. Or maybe he wouldn’t get cleaned up—just go over in work clothes covered with pitch and sawdust. It would have been a little embarrassing except they all knew him as well as she did.

And then there were even darker days, when Noah came home early and her heart broke for him. Another major setback, and he was afraid he’d never finish. Deep in self-doubt, he sat around the house, shoulders slumped and face gray with worry. She worried, too, tiptoeing around the house doing laundry and watching him from the next room. Maybe he didn’t work on the ark for days… 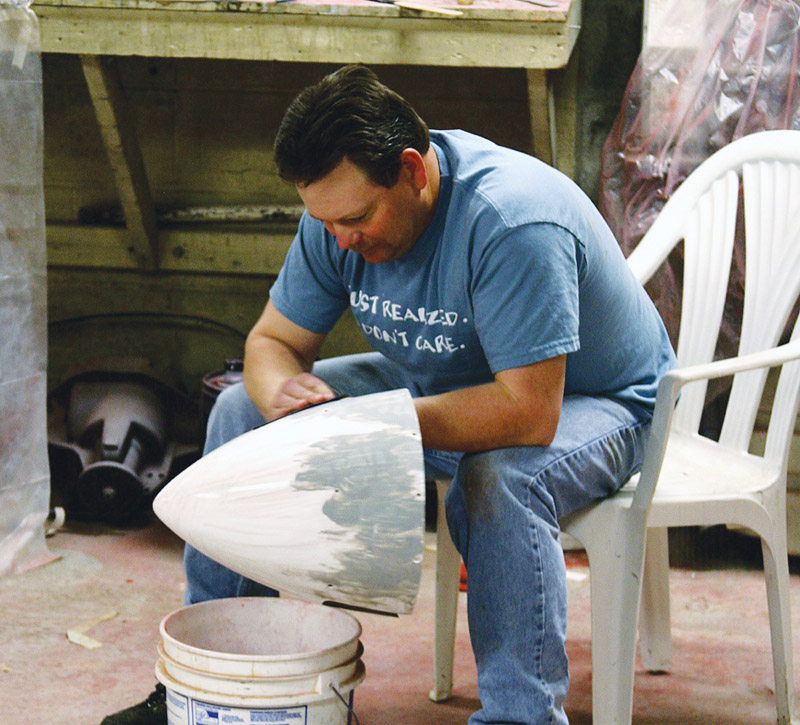 A friend, Dave Carder, helps with paint prep on the spinner.

In desperation, he prayed. She prayed. And after some rest, his faith began once again to flutter in his heart. “Hope springs eternal,” and all that. Noah took some time out to enjoy playing his lyre and a friend called with an encouraging word. There was also the fact that Noah’s wife was no exception to wives everywhere in understanding how to make a man feel like he can conquer a project—and for once he wasn’t too busy to notice. She smiled as she watched him leave the next morning in the pale yellow sunshine, dew on the grass and a resolute quality to his step. 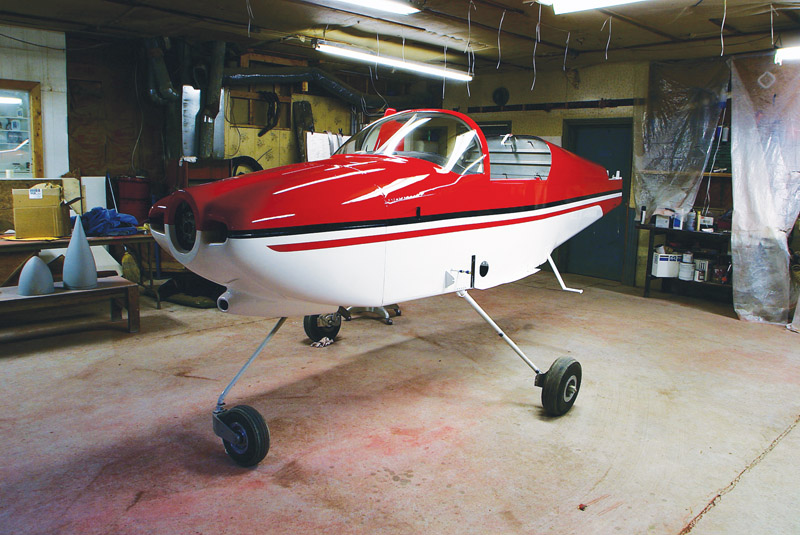 Freshly painted, the fuselage shines in the lights of the garage.

Time went on…and sometimes it seemed like the only thing anyone ever said to her in the grocery store was, “So-o-o, Noah got the ark done yet?” or “When’s that ark gonna be finished?”

Eventually the day came. A few good friends saw Noah roll the ark out of the hangar—um, I mean, climb down from pitching the last of the boards. Mrs. Noah beamed with pride and accepted congratulations almost as if she’d been part of the project. But then, I guess she was. 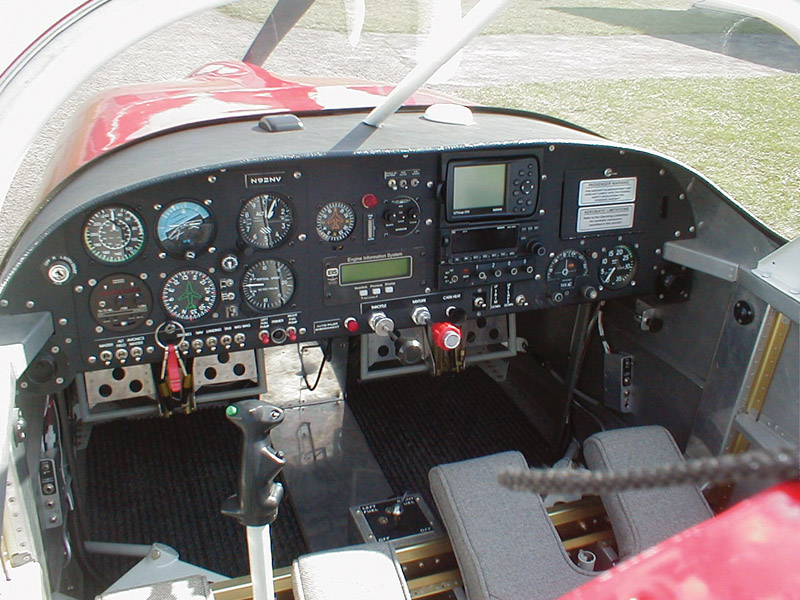 The completed interior, including the panel, carpet, and seats.

Just as Mrs. Noah’s reward was a nice long trip in the ark, so too was mine. Two and a half months after the completion of our RV-9A my husband flew us 1000 miles to South Dakota and back. But that, as they say, is a different story. 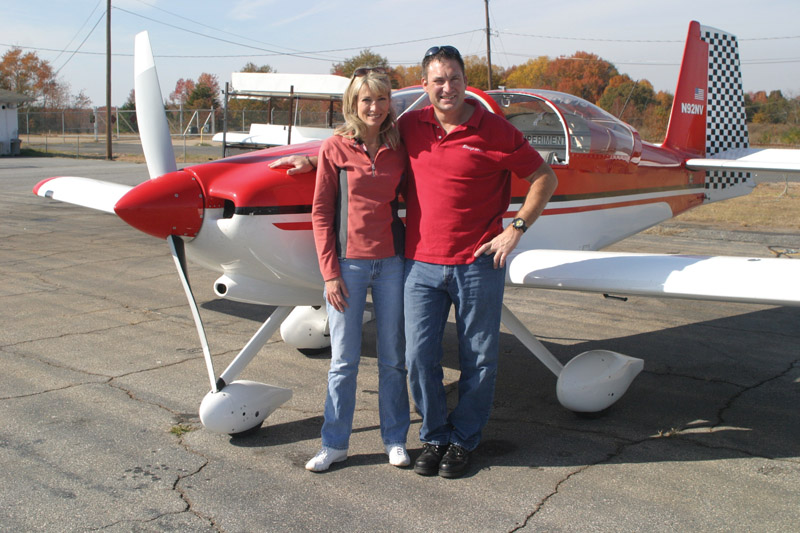 Ready for our first trip in the RV-9A!